Road trip across Karnataka – I – Melkote – Reverberating in Vishnu Bhakti !

Who wouldn’t love going on a road trip with family? If the road trip is across a traveller’s paradise like Karnataka, it just can’t get better ! After months of discussions between our folks in Bangalore, Hyderabad and Nellore, we drew up our travel plan – the trip would take us from Bangalore to Chikmagulur with visits to the famous places enroute.

With a family full of travel enthusiasts, a Tata Winger at our service and equipped with a Nikon DSLR from a friend who was kind enough to lend us his, we began our journey from Bangalore. The highway just outside of Bangalore, the NICE road is simply breathtaking, we hadn’t seen anything like that until that day, for a moment you wonder if you are really in India !

Since we were setting foot in Karnataka after more than two decades, we had no idea what route we were taking. All that we knew was that the green landscape was as beautiful as it could get. It was a fun ride in the Winger, which was almost like a mini caravan. Our first destination was Shravanabelgola but half way through the journey, we decided to take a detour to visit Melkote. Though it was slightly out of the way, it was close to our destination and we did not want to miss it.

Melkote is one of the important centers of Sri Vaishnavism. The place has been an important pilgrim center for over a thousand years and rose to prominence during the time of Sri Ramanuja, the chief proponent of Sri Vaishnavism who lived in Melkote for 12 years around the 12th Century A.D.

Today, Melkote is a small village, popular for the two ancient temples dedicated to Lord Vishnu known here as Cheluvanarayana Swamy and Yoga Narasimha Swamy Temple on a hill top nearby.

We visited the Yoga Narasimha Swamy temple first. The hillock is small and the climb up, though steep, is not very tiring. 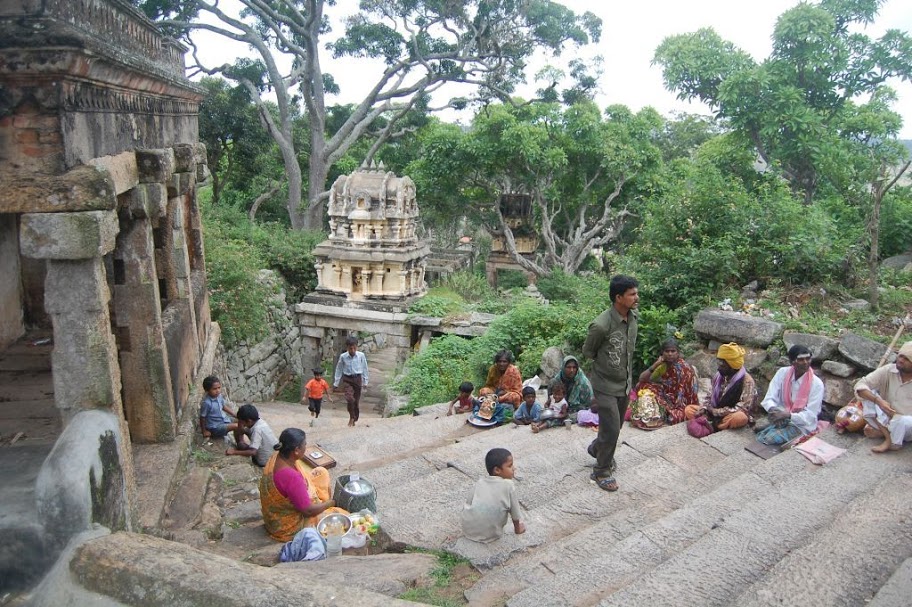 According to the information board, the temple was built during the Hoyasala reign and just like all their temples, a beautiful one ! We were only making a brief stop at the temple and did not have much time to take pictures, also since we were just learning the ropes of handling the Nokia DSLR, we had to be satisfied with pictures like these ! 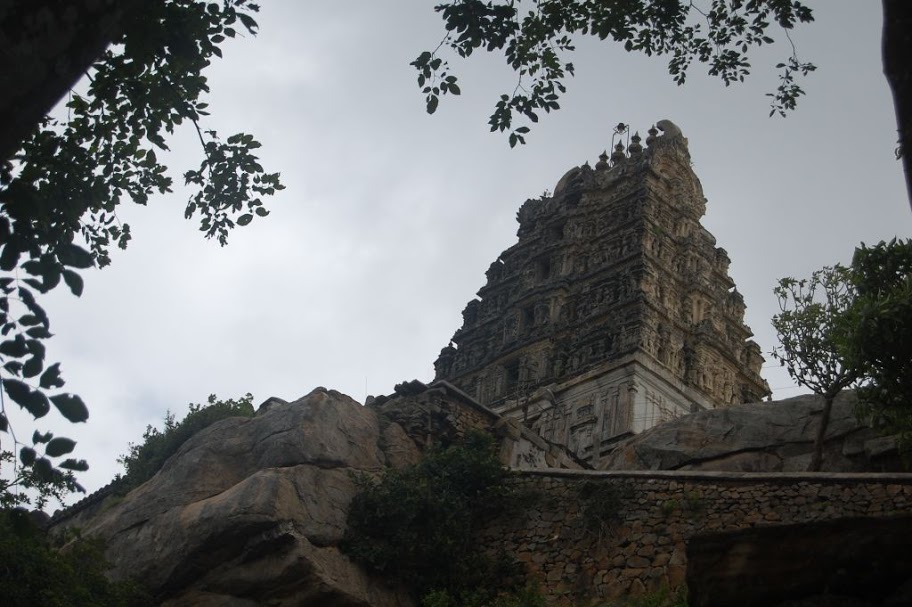 The Yoga Narasimha Temple reminded us of a similar temple, the Yoga Lakshmi Narasimhaswamy temple in Sholingur, Tamil Nadu.

The best part of the temple is the lovely view of the Melkote village. You can spot the Cheluvanarayana Temple, with the green fields and hills in the background. 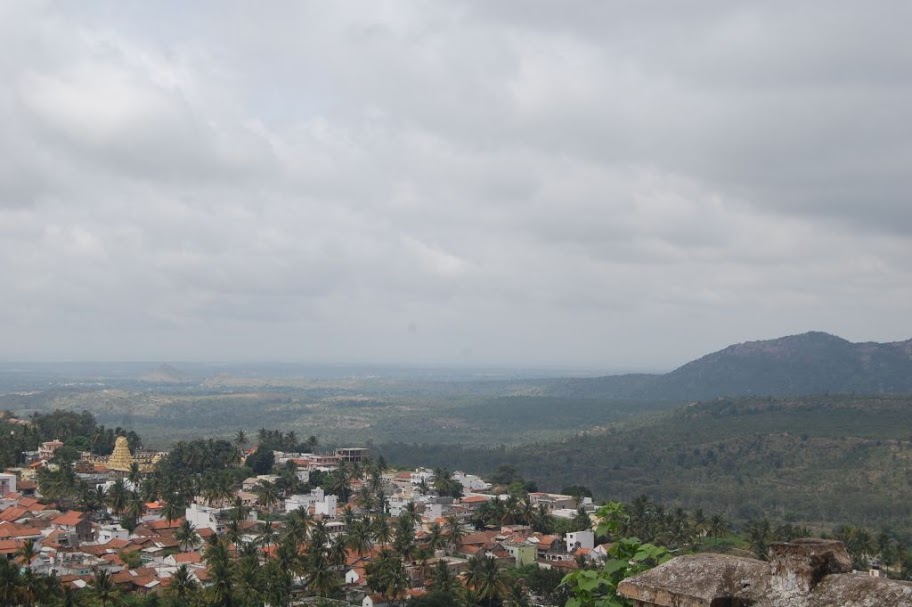 Another pretty picture is the temple tank, called Kalyani. 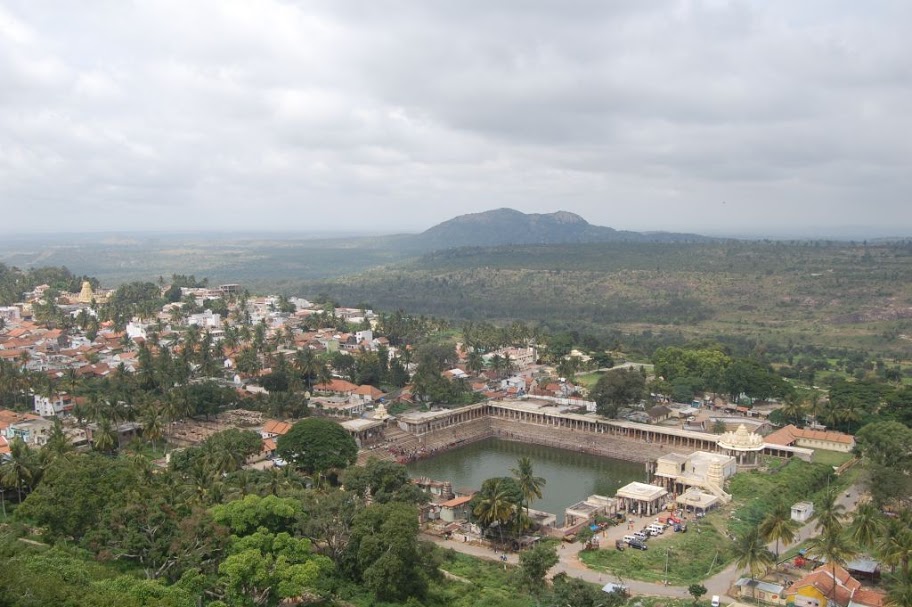 After a quick darshan, we climbed down the hill and visited the Cheluvanarayana Swamy Temple.

The Cheluvanarayana temple has several interesting legends, all associated with Sri Ramanuja. It is believed that the temple was in a ruined state until Ramanuja gave it a new lease of life along with the Hoyasala ruler of that time. Ramanuja had left the Chola country of his birth because of the hostility towards Sri Vaishanvism by the Chola rulers and travelled across South India, during his travels, he lived in Melkote and revived the temple.

There are also stories about how the temple was looted during the Muslim invasions and the Utsava idol was taken away to Delhi, Ramanuja went all the way to Delhi, met the Sultan and got the idol back. We do not know the truth behind these stories because Ramanuja lived in the early 12th Century A.D and the Muslim invasion began only in the early 1300s A.D. You could read about all these stories on the internet.

Nevertheless, the temple at Melkote became a seat of Sri Vaishnavism, thanks to the efforts of Ramanuja. Even today, when you walk in the streets of Melkote, you feel time has freezed since the times of Ramanuja. You will find staunch followers of Vishnu Bhakti everywhere, Vishnu Namam (Tilak) shines on the foreheads of almost every person on the way to the temple.

Inside the temple is the beautiful idol of Lord Vishnu as Cheluvanarayana, the Utsava idol is called the Selva Pillai or Sampath Kumara. Incidentally, one of our uncles is named after the idol and we finally saw the temple where he got his name from !

We wound up our visit of Melkote very quickly after a visit to the temple as we had a long way to go. Any attempt at clicking pictures was dropped after we spotted monkeys everywhere, including some resting on our car ! We made a dash inside our car and left it to the driver to shoo the monkeys away !

All we managed was this picture of the Yoga Narasimha Temple from the speeding car, we couldn’t avoid a smiling Mr.Yedurappa from obstructing our view ! 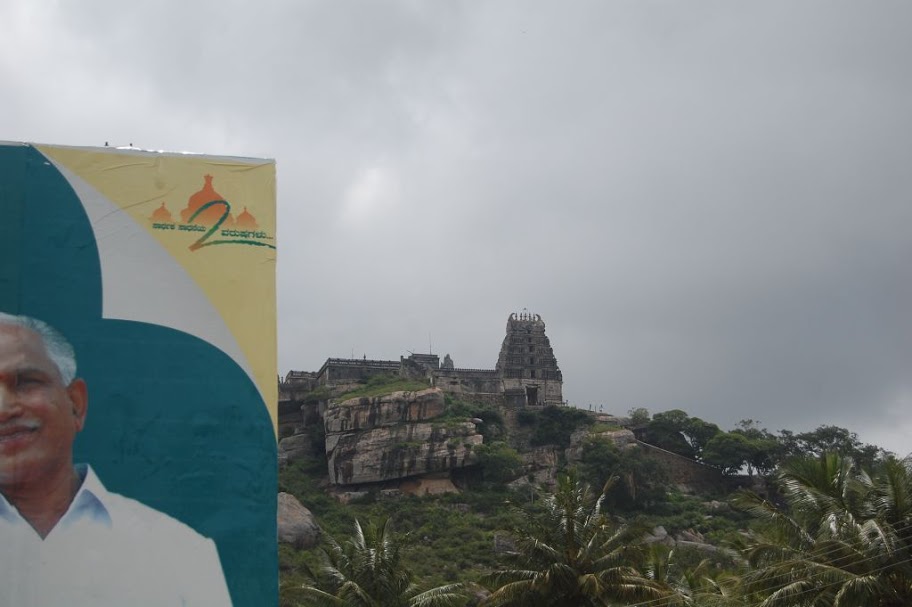 There is a ruined Raya Gopuram in Melkote which is a popular movie shooting spot, we did not visit it. Our trip to Melkote was more of a hop in, hop out kind of visit, we are sure, we will go back there again for the place has a charm, you could call that charm the effect of Vishnu Bhakti !