Juggernaut – An overwhelming, advancing force. This word probably fits the description of God and more particularly, the Lord of the Universe, Jagannath. The English word, as we all know, was derived from the very name of the Lord Jagannath of Puri.

Puri, 60 kms from Bhubaneswar and part of Odisha’s Golden Triangle, is one of India’s most popular pilgrim centers and is known for its stringent religious practices and beliefs. Puri is also one of the 4 Mathas established by Adi Sankara, which are referred to as the “Char Dhaam”. The Char Dhaam Kshetras are located in the 4 corners of the country – Badrinath in the North, Puri in the East, Rameswaram in the South and Dwaraka in the West. A visit to each of these 4 holy places in one’s lifetime is considered equivalent to attaining salvation.

So, seeking half salvation for ourselves (we had already visited Rameswaram), we set off to Puri from Konark.

The 34 kms drive from Konark to Puri is along the coast, the sea is close to the road. The sea and sometimes the backwaters keep you company for most part of the 45 minutes journey.

Excuse the poor quality of the picture, we were short of time and took pictures on the go without stopping the car. The view of the sea right outside your window is refreshing. This stretch is one of the most enjoyable drives in the county.

It was 3.30 PM when we neared Puri, we wanted to visit the Puri Beach first but our driver advised us to we visit the temple first because it usually got very crowded towards the evening. He was kind enough to speak to one of his friends whose family worked at the temple and arranged one of them to guide us at the temple.

Back to the old world !

The first thing that struck us when we reached Puri was the old world feeling of the place. The buildings, people, rickshaws, shops, the roads, everything looks like a set from the early 1900s. Towering above all these is the Vimana of the Jagannath Temple.

Private vehicles are not allowed anywhere within the radius of 1 km of the temple. The entire stretch of the road is the pathway for the famous Jagannath Rath Yatra, where lakhs of people attend the car festival of the Jagannath Temple celebrated once a year, the word Juggernaut was coined after the Rath Yatra, in fact.

Before we left the car, our driver had instructed us not to get into any discussions with people offering to take us around the temple or to even look at the priests in the eye ! Well, the Puri Jagannath Temple is equally famous for priests, officials and guides who would make sure you come back with your wallets much lighter !

We walked the distance to the temple, mesmerized by the old world charm of the place. Photography is not allowed near or inside the temple and so we did not carry our camera, we missed capturing the sights and sounds of Puri.

The Puri temple history probably goes back to the Puranic times but recorded history of the temple structure places it int he 11th Century A.D built during the reign of Eastern Ganga Dynasty.

We met the guide our cab driver had arranged for us and entered the temple and were immediately taken back by chaos ! People, people everywhere, long queues ahead of us, people shouting, religious chants, bright colours ! We had no idea where to go and what was happening. You cannot even understand the structure of the temple, except the 214 feet high Vimana, one of the tallest temple towers in India ! Only complaint, the Vimana was painted pink, taking away its ancient beauty.

Our guide informed us that the temple was closed for half an hour or so for some puja, so that explained the crowd ! After about 45 minutes, the queue moved and the usual shoving and pushing, common in Indian temples began. We hardly got a chance to take in the temple views.

We inched inside the Sanctum Sanctorum and then everything else was forgotten. Inside the dimly lit Garbha Griha stood the huge wooden idols of Balarama, Subhadra and Jagannatha. The idols do not have a proper shape of a deity, the faces are painted bright with very big eyes and dressed in loud coloured clothes, nothing what you expect to see in a Deity. Yet, one look at the idols and we didnt’t know where the calmness came from. Beside us, the chaos continued with people milling in and out, priests ordering them around and mantras being chanted. Our guide asked us to stand in one corner, away from the crowd and just looking at the idols, we felt like everybody had ceased to exist ! We still wonder how the feeling of peace came to us when there such a disturbance around us.

Then philosophy dawned on us. Our lives are chaotic, sometimes they make no meaning, there is noise everywhere, in the midst of all this resides the Divine Energy, the energy that rules the universe, the Jagannatha and when we step aside from the chaos and look within, we will discover that energy and the peace !

We may not remember much of the temple but that moment of oneness with the Divine that we felt at that moment would remain etched in our lives for ever. We went around the idols, as instructed did not even look at the priests though they were asking us to put in our offerings (we escaped by paying Rs.40/- as offerings) and walked out feeling dazed !

The Jagannath temple is huge and there are so many smaller shrines that you lose track after sometime. In one of the shrines, you will find the idol of Lord Surya or the Sun God, which is believed to have been the original idol at the Konark Temple, shifted to Puri sometime in the 17th Century A.D. The idol of the Sun God is extremely cute and he wears boots too !

As we walked around our guide told us lots of stories and legends associated with the temple, there are too many to list them here. He told us the idols are buried ever 12 years and new ones are made from a particular kind of wood and the priest who performs the rituals of the burying the idols dies within a year ! Scary !

It seems, every morning and evening, the flag on top of the Vimana is hoisted and lowered, there was a family is in charge of it for generations, they climb the Vimana using chains, you can see the sturdy iron chains hanging from the top of the Vimana, imagine climbing a 214 feet Vimana !

The temple follows some very strict and elaborate rituals for daily pujas and festivals. The Mahaprasad at the Puri temple is very famous, we didn’t get a chance to have it though.  You could read all these legends, stories and rituals on the internet

By the time we walked out of the temple, it was sunset time. We  shopped a bit in the market outside the temple, there was nothing much that interested us but we bought idols of Balarama, Subhadra and Jagannatha, that grace our home today. A rickshaw ride (first for this writer) took us back to our cab.

An unforgettable spiritual experience, it was, coming face to face with the overwhelming force, the Juggernaut, you could add it to the 1000 names of Lord Vishnu !

We visited the Puri Beach in the fading light, we couldn’t see anything but managed to take a blurry picture with Jupiter shining in the sky ! 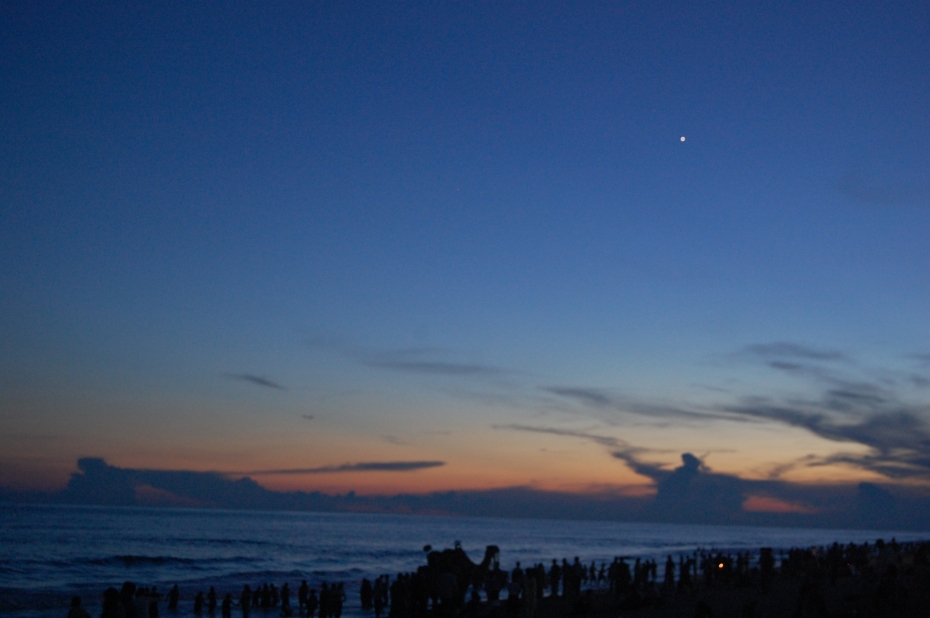 How do we know it was Jupiter? Well, it was all over the news, Jupiter was quite close to Earth at that time and was visible to the naked eye.

The drive back to Bhubaneswar completed our Golden Triangle trip, we reached our hotel at 7.30 PM and retired for the day early as we had to catch the train back to Palasa at 3 AM.

– Puri is connected to all parts of the country by trains. From Bhubaneswar there are trains and buses to Puri, you could hire a cab too.

– Though Konark and Puri can be covered in one day, it is advisable to plan your trip so that you set aside at least 3 hours for both the places.

– The Jagannath Rath Yatra is held usually held in the month of July or August, though the car festival is world famous and one of the oldest continuing temple festival in India, it may not be a great time to visit the temple. THe crowd is unbelievable and there is no guarantee you would come back in one piece but that would be an experience in itself !

– Be careful of priests and other temple employees, they could be rude sometimes and slightly money minded too but don’t let all that spoil your spiritual experience.