The Nagarjuna Sagar Dam was built in the 1960s over the River Krishna very close to Nalgonda. The place was also a seat of Buddhist learning, where the famous Buddhist philosopher Acharya Nagarjuna lived and preached during the 2nd Century A.D.

This trip to Nagarjuna Sagr was a little different because we were staying there overnight. A drive to Nagarjuna Sagar from Hyderabad takes only about 2 hours, so most trips are only day trips, you can start early in the morning and return by evening. If you wish to stay over night, you can start towards afternoon/evening. We started in the afternoon and drove to Sagar (as it is popularly known), the Hyderabad-Sagar road, a double road, has always been in great condition for atleast 10 years now. Another good thing about this road is that the traffic is less, inspite of the being the connecting road to travel to South Andhra.

The drive is always enjoyable, you will not realise how soon you reached Sagar until the Krishna River suddenly makes an appearance out of the blue. The view will leave you stunned. We must have driven by that view several times, yet every time we near that particular turning, we get excited to relive the thrill that view gives !

As you near Sagar, you will be greeted by AP Tourism’s Vijay Vihar resort, this is the best place to stay in Sagar. They have some amazing views the Dam and the river from almost all the rooms. Even their restaurant overlooks the river. If you don’t stay at Sagar or are passing by Sagar, make sure you stop here for lunch or a cup of coffee. There is another hotel near Vijay Vihar but we not sure if they have the same views and service. We reached the AP Tourism resort by evening, refreshed and set out to drive around.

The first sight when you enter Nagarjuna Sagar is that of the Dam, massive and imposing. There was a time when vehicles were allowed on the Dam but the road was closed down to protect the Dam and a bridge was built opposite to the dam. From this bridge, one can get a great view of the Dam in all its height and width – a sight to behold !

If there have been good monsoons, sometimes you may be lucky to visit Sagar when the flood gates are open. Most years, it is a rarity but sometimes, one does get lucky like got on 3 occasions. The first and the best was in 2004 when all 26 gates of the dam were opened. We literally had tears of joy to see the dam in its full glory ! The force of the water sends up a spray and mist which is visible 2 kms away ! Though it is an unforgettable experience, people throng in lakhs to Sagar and you will also have to put with nasty traffic snarls !

Our next chance was in 2005 when we were touring Srisailam and Sagar and another lucky encounter in October 2007 while were driving from Hyderabad to Nellore (Sagar is enroute), we had no idea that 10 gates were open. This picture was taken in 2007.

There is also a broken bridge, which was originally built to divert traffic from the dam but it collapsed in the very first flood after it was built ! From here the Krishna flows further east through the Nallamala Hills, towards Vijayawada. You would just stand on the bridge and keep staring at the river as it goes about its business, though you have to brace yourself up when the river is in full force, it could be a little scary. 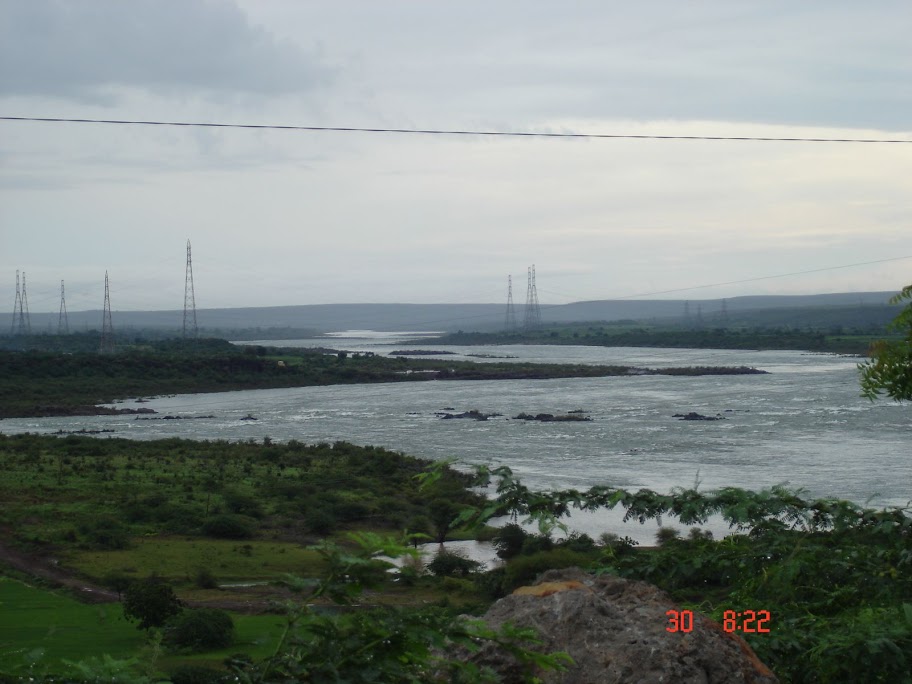 On the other side of the bridge is the actual Sagar town with hotels, launch station for boats. Further ahead is the Nagarjuna Sagar Hydro-electric project, a high security area. We then went towards the broken bridge and climbed down to the river bed. The Krishna river shone in its silvery beauty at the foot of the dam as the sun began to set. 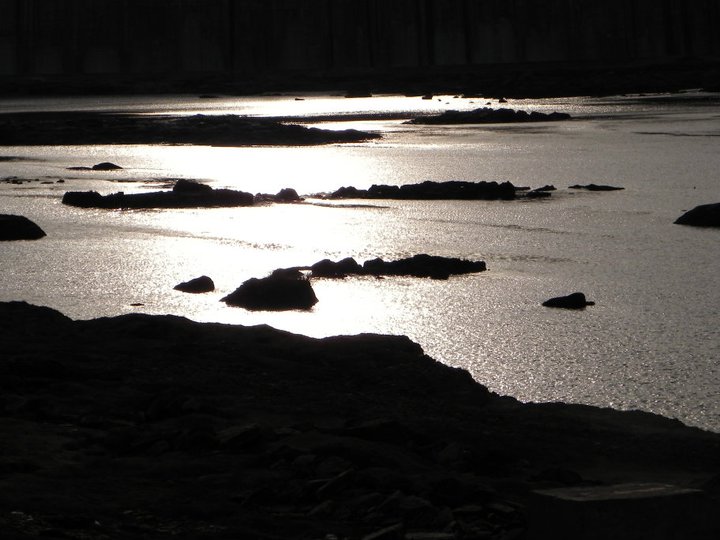 We decided to check the Ethipothala Waterfalls, 11 kms from Sagar. These falls are formed by a stream of the Krishna River and are seasonal falls. During monsoons, they are in full flow with the flood water. This picture was taken in 2007 when the falls were full. 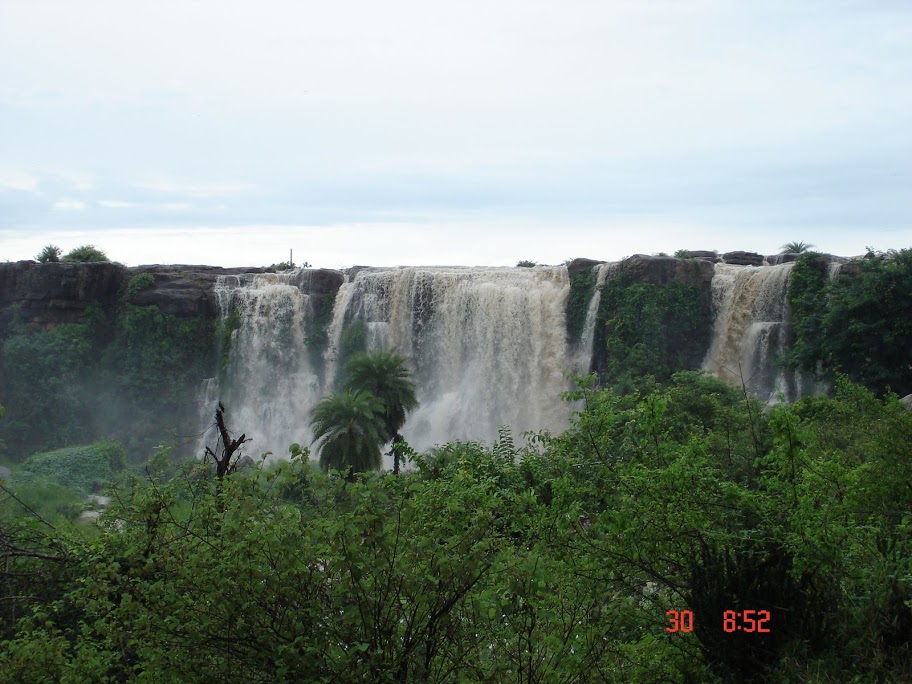 Till about a year back, people could trek right upto the foot of the waterfalls through thick woods, sit on the rocks with the falls in the backdrop and lose themselves in nature. Some people really lost themselves and their lives, following such incidents, the trek path is now closed for public. The river here is also a breeding ground for crocodiles.

You could still walk down a little and still get a panoramic view of the falls.

The official place to view the falls is a park built by AP Tourism around the best viewpoint. 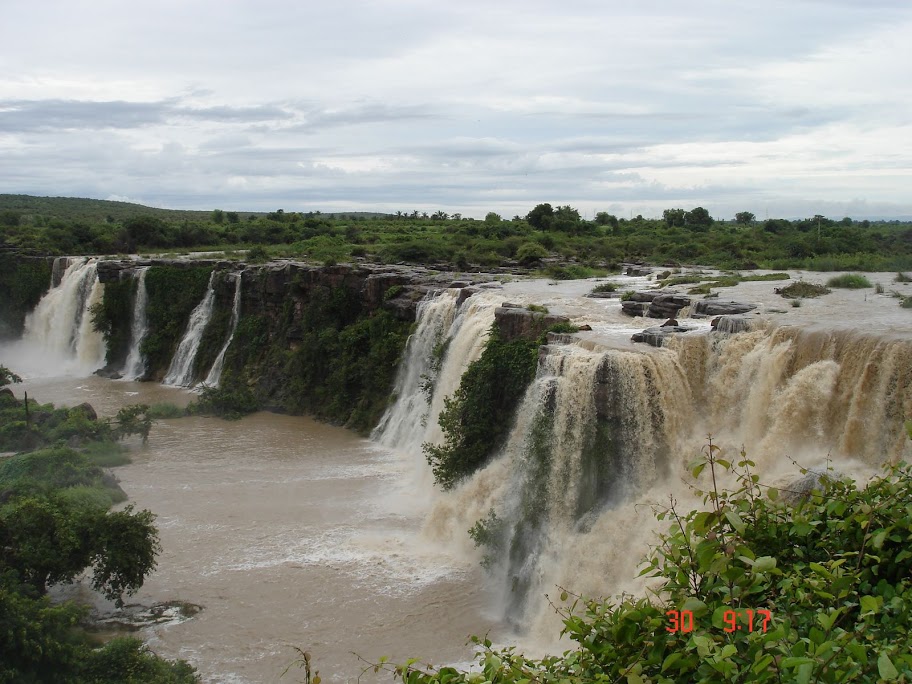 Now you know when to visit Ethipothala Falls !

In this trip, there was only a trickle, July is when monsoons just about begin to show up. By the time we reached the falls, it was past sun set time and darkness was setting in. We had a snack at the eating joint inside the park. AP Tourism has built a couple of rooms here, people can stay at the Ethipothala Falls for the night, wouldn’t it be lovely to wake up looking at the waterfalls? Ethipothala is cut off from the main road and is remote, security should not be a problem because the place is run by APTDC.

Once day light fades, the falls are illuminated by lights placed strategically at various points. The falls change colour under the lights and it is breathtaking. We couldn’t take great pictures because there was complete darkness except for the illuminated falls. This was the only decent picture we managed, a row of trees close the foot of the falls. 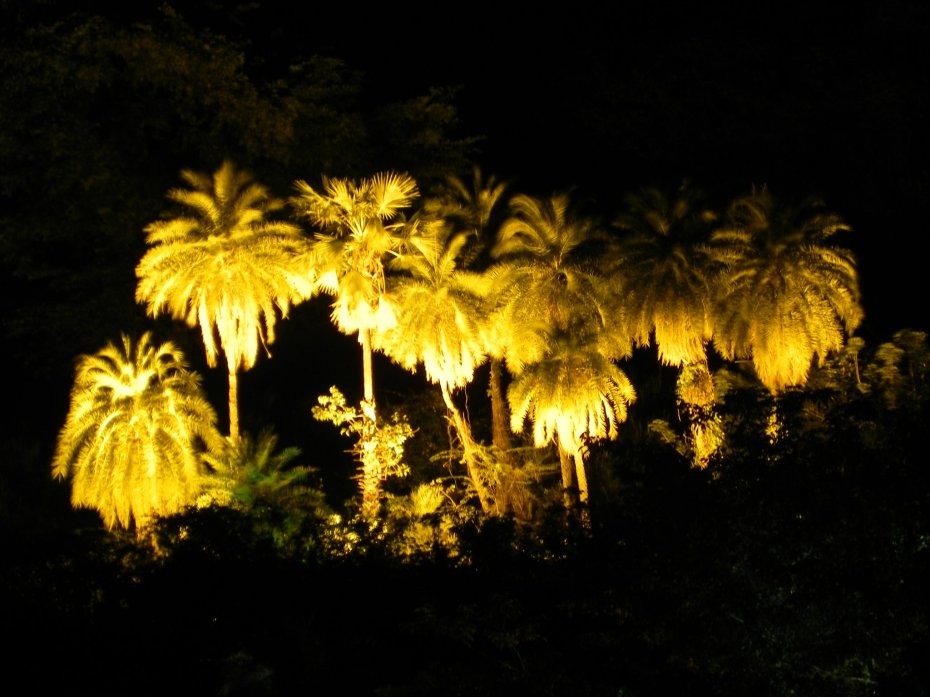 We cannot begin to describe how magical it was ! Do not miss this spectacle.

We cannot also describe how scary it was when monkeys swarmed the area in hordes, in the darkness, we ran for our lives. Dogs, monkeys and night time, bad company ! And then, there was power failure and the whole area turned pitch dark, we couldn’t even see the person next to us, you wouldn’t know if it was a monkey or a dog or a human (though all categorised as animals) ! Thankfully, power was restored in a few minutes before we freaked out thoroughly.

We finally left Ethipothala Falls and the drive back was almost like an adventure on a lonely, dark road. As we reached Sagar, this view simply took our breath away !

The Nagarjuna Sagar Dam lit up at night. This picture says nothing about how magnificent the view was, it filled us with pride !

Post dinner at the resort, we drove around the empty roads Sagar, in search of ice-cream. The entire town was closed for the day at 9 PM, we found a lone shop selling ice-cream. The rest of the night was spent looking at the river glimmering under the lights before we retired for the night. A standard room at Vijay Vihar costs around Rs.1700/-, they also have a swimming pool, banquet hall and conference rooms.

Early next morning, we went down to the river, which can be reached by a walk from the resort. Breakfast service is open at the resort only at 8 AM and so we decided to while our time till then. The walk is tiring as you have to climb down several steps and walk on the rock strewn river bed, some of the rocks are really sharp and you have to watch your step. It is a little difficult but worth it because the it is a most refreshing feeling to stand with your feet in the river. In summer it is possible to walk down to the river on the dry river bed. Here is a picture from our trip in April 2010. 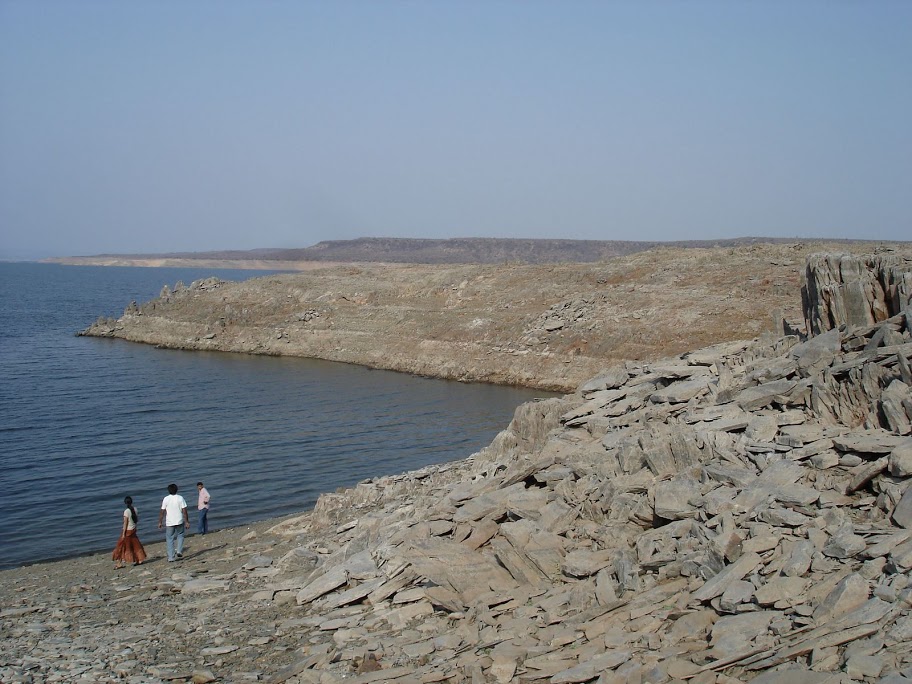 Back to the present, we spent sometime in the cool river breeze as the river splashed about near the rocks.

The climb back is the most difficult part, you have to climb back on the steep, rocky surface with pebbles poking you and climb back all those steps. It is advisable not to eat anything heavy if you plan to go down to the river but also make sure you have enough energy because by the time you reach the resort, your energy is drained out. In our last trip in April 2010, one of our friends almost had a heat stroke because we went there on an empty stomach and even at 9 AM, the sun was unforgiving !

All that is forgotten, the moment you sit for breakfast, AP Tourism, doesn’t disappoint you on that front.

We then set out to explore the ancient history of the place. The Krishna River valley at Nagarjuna Sagar was an important Buddhist centre, close to 2000 years ago. Acharya Nagarjuna, after whom Sagar is named, lived and taught here. Before the dam was built, the ruins of the Buddhist monastery were located on the banks of the river. These ruins were under threat of submerging when the dam was built and the ASI relocated and rebuilt the ruins exactly as they were alongwith a museum to store the artifacts, on a hill island in the middle of the Krishna called the Nagarjuna Konda.

Once you reach Nagarjuna Konda, you are on your own to explore the place. The place is an ideal picnic spot, overlooking the river.

The museum is very interesting with artefacts, sculpture, edicts and other articles found in the ruins of the monastery. The actual ruins have been rebuilt, spread around the island. One has to walk some distance to explore the ruins.

There are Stupas, shrines, Chaityas, bathing ghats and the most important of all, a life-size statue of Buddha,

the Chaitya and living quarters of monks. 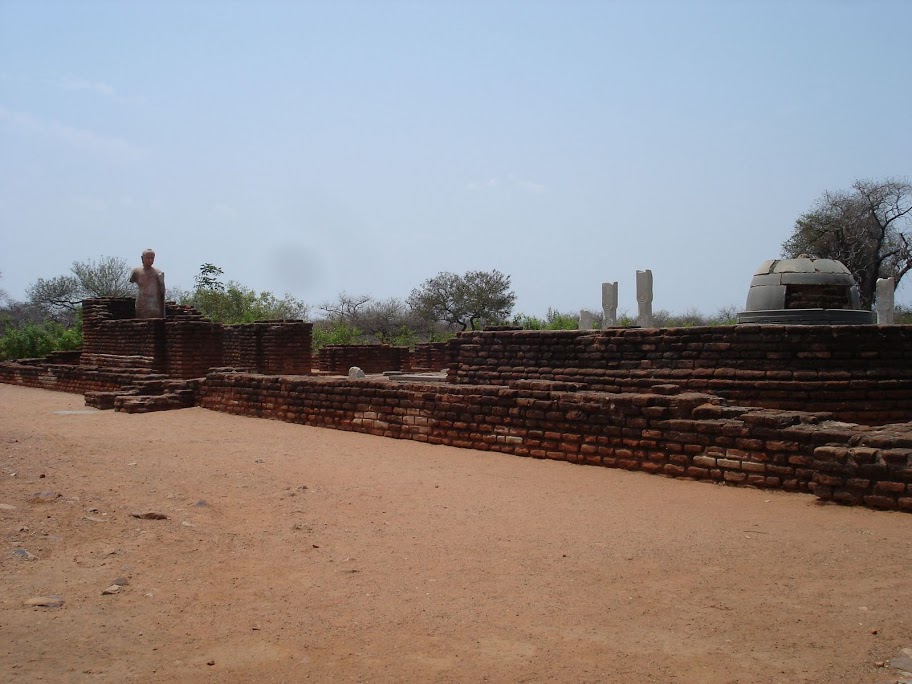 The river keeps peeping in from behind the ruins here and there.

ASI should be appreciated for their efforts in safeguarding the ruins and remnants of Acharya Nagarjuna’s times. Many people do not take the trouble but whether you are interested in history or not, visit the ruins. You will enjoy the walk through the ancient learning centre and feel like you have been transported 2000 years back.

Before you embark on the trip to Nagarjuna Konda, make sure you carry enough water, the place is dry and even in the cooler months, it is very sultry thanks to the huge water body flowing beside the island. The walk to the ruins will tire you out.

The launch, usually comes back to pick you up after an hour and a half, so you need to keep track of time. The last launch from Nagarjuna Konda back to the main land is at 5 PM. If you miss this, then you are stranded on the lonely island for the night !

We were back at Sagar by lunch time for a simple, tasty Andhra meal at Vijay Vihar. We also wanted to check out some more ancient ruins at Anupu, a village 8 kms from Sagar but gave up the idea because we were too tired and drove back to Hyderabad.

For the nth time, Nagarjuna Sagar had us under its spell and will continue to do so.