Bhairavakona had been on our list for a long time, it is one of those lesser known places of tourist interest but right from our childhood, we had always heard about the place back in our village. The main attractions of Bhairavakona, located 145 kms from Nellore and Ongole, are the ancient rock-cut cave temples and scenic beauty since it lies in Nallamala Forest and Hills range.

To celebrate Mr. and Mrs.Your’s Truly’s wedding anniversary, we planned a visit to Bhairavakona. It was more of a picnic idea as we planned to cook and have lunch in the forest area. Equipped with all the items for cooking lunch in the wild, we drove to Bhairavakona from Nellore via Sangam, Nandavaram and Udayagiri. The state highways are reasonably well maintained and the drive from Nellore takes about 2 & 1/2 hours.

When we reached Udayagiri, we found a big, ancient, ruined temple on the roadside. The history lover in us was immediately drawn towards it but we decided to check it out on the return from Bhairavakona. We reached Bhairavakona by 10 AM, having started at 7.30 AM.

Even as we neared the place, we could see the hill range becoming prominent, Bhairavakona is actually nestled in the thick forest of the Nallamala foot hills. 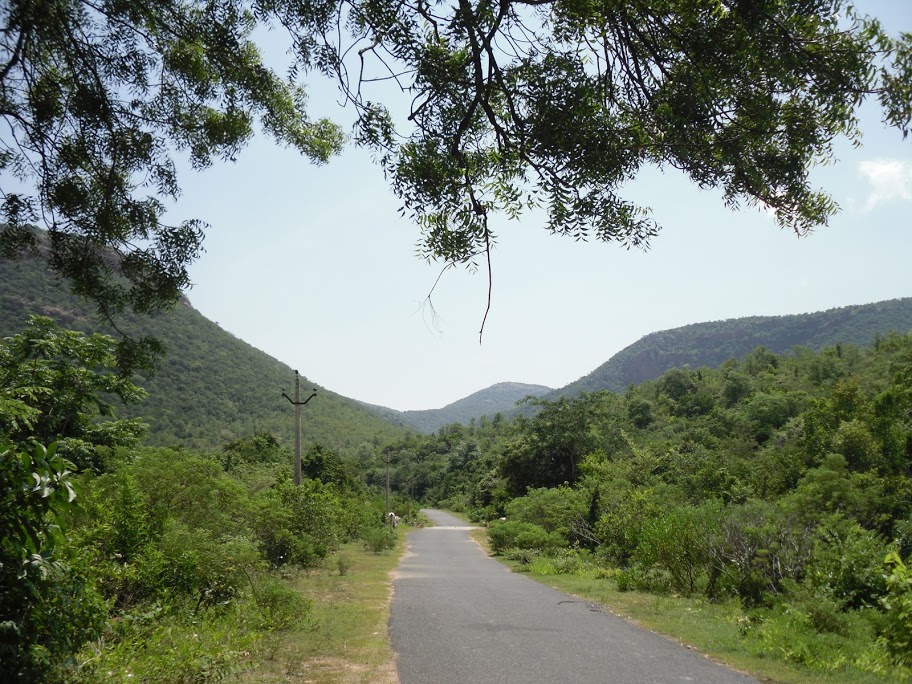 We had heard about a beautiful waterfall at Bhairavakona, adjacent to the rock-cut caves. When we actually reached there, there was no waterfall at all, just some water trickling down the rocks and forming a small pool where people were trying to swim. 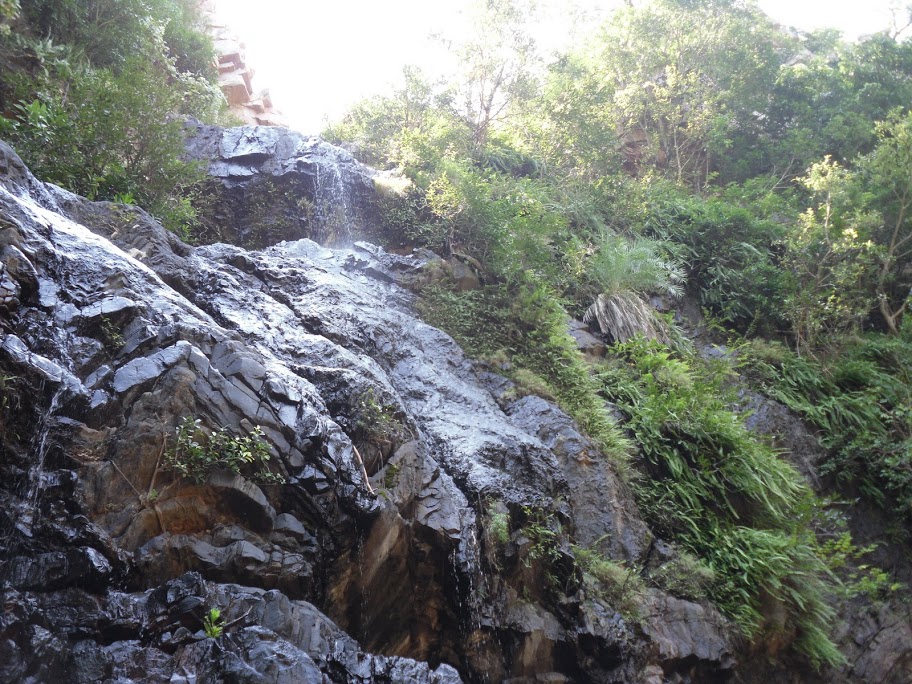 Obviously, it was the wrong season to expect waterfalls in full flow, monsoons in this part of the state usually started in last week of October and in the absence of monsoons, waterfalls in this area have no meaning.

It was nearing lunch time, so we decided to go back onto the road and find a place to cook our lunch. We chose a place on the edge of the woods on the roadside, collected fire wood from the nearby woods and set up our stove to cook rice and vegetables. 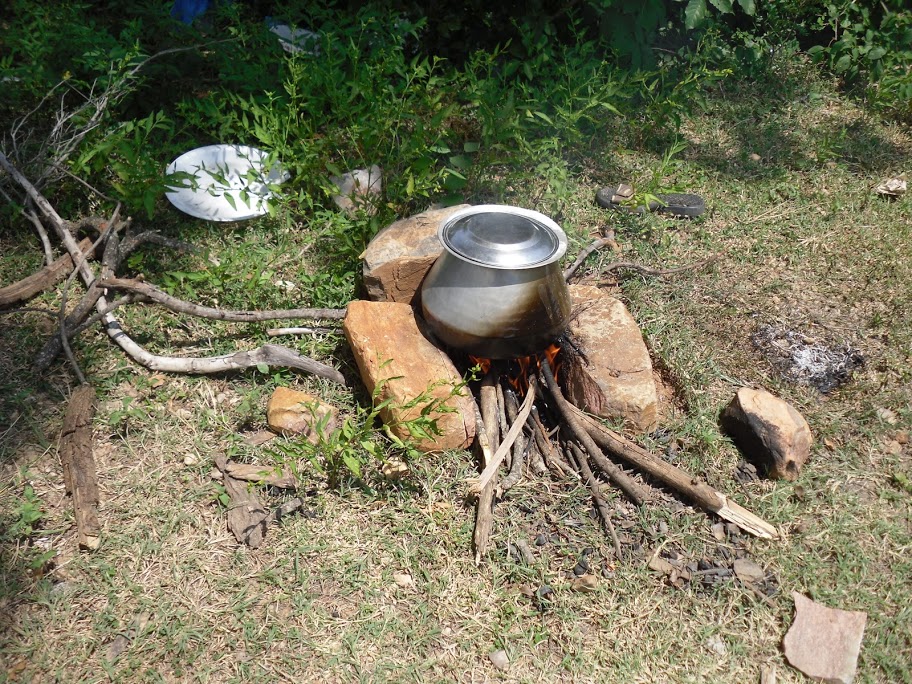 It was great fun cooking in the wild and while lunch was getting ready, we ventured into the woods. It was quiet and cool, we imagined wild animals to jump at us but there were only a few cows grazing here and there. It was refreshing to walk in the wild amid total silence. We also found plastic plates and bottles littering the place, which meant people often visited this place and picnicked here.

Lunch done, we lounged for a bit under the shade and went to see the rock-cut cave temples.

The rock-cut cave temples are somewhat similar to the one at Mahabalipuram, not surprising because the cave temples at Bhairavakona were built around the 7th Century A.D probably by the Vishnukundina kings, in the same time period as the Pallava kings of Mahabalipuram. 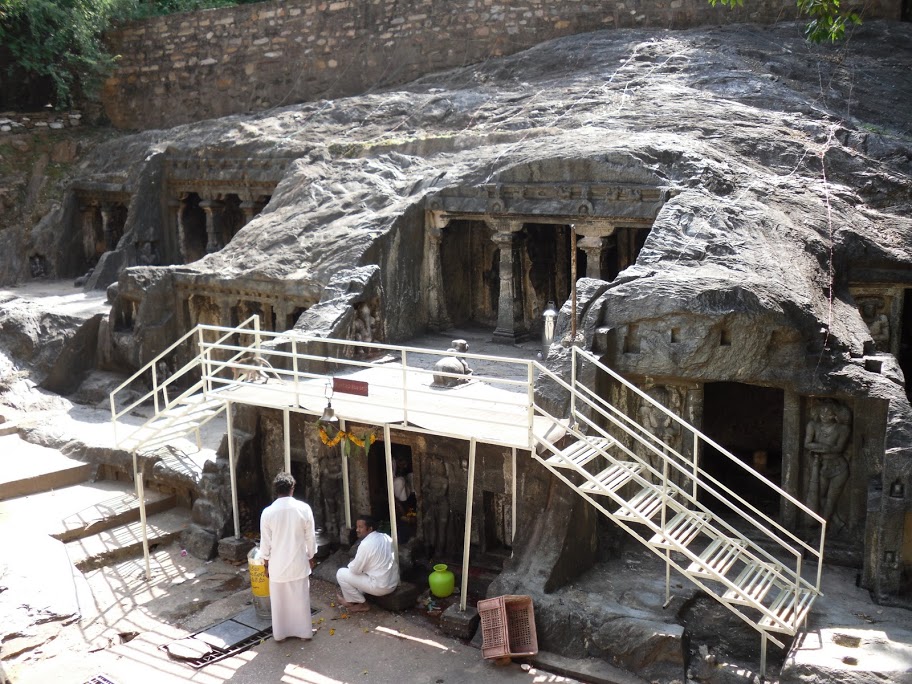 There are 8 shrines for Lord Shiva in 8 different forms. The sculpture also reminds you of the sculpture at Mahabalipuram. 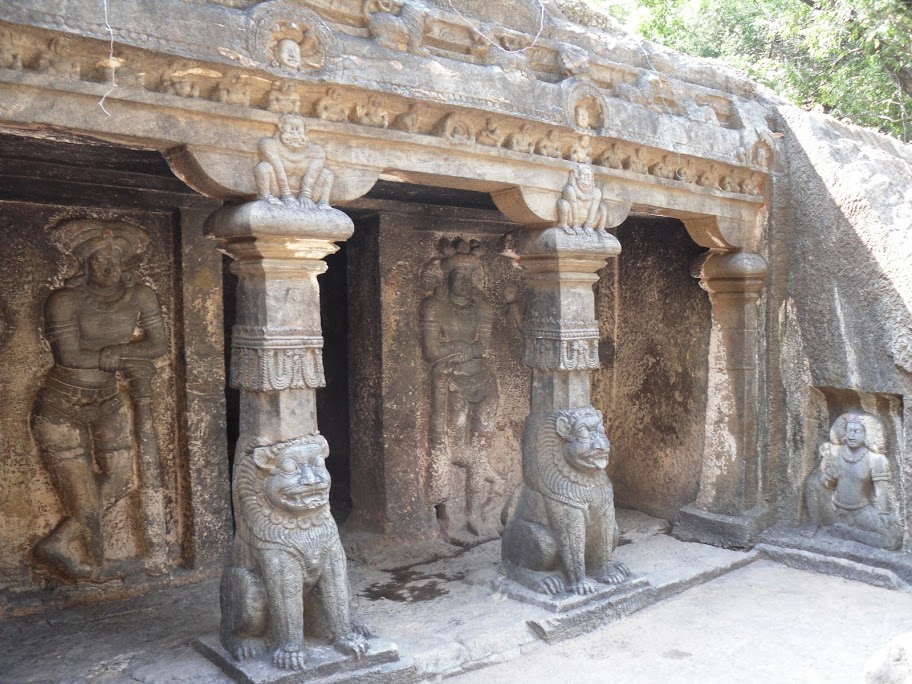 Bhairavakona attracts thousands of devotees during the Mahasivaratri festival. There is also a temple for Annapoorneshwari adjacent to the rock-cut temples, there are steps leading up to the shrine but we avoided going there for fear of monkeys who seemed to have a rocking party there !

After a snack of some crunchy, spicy masala vadas served hot in the lone shop there, we started back from Bhairavakona.

Bhairavakona is an ideal place for a day picnic, the forest is peaceful, the landscape very scenic dotted with hills, there is a waterfall to splash around for a bit and ancient temples to visit.

At Udayagiri, we stopped at the ruined temple we had seen in the morning. The temple seemed to be abandoned for centuries and stood alone and exposed on the road side. The condition was appalling, even the gate that was supposed to keep miscreants off, did not have a lock.

We went inside and were taken aback. The temple was not just some small shrine but must have been a very prosperous and thriving temple at its peak time. The base of the Gaali Gopuram or the entrance tower is massive. If the base is that massive, one can only imagine how huge the tower must have been. 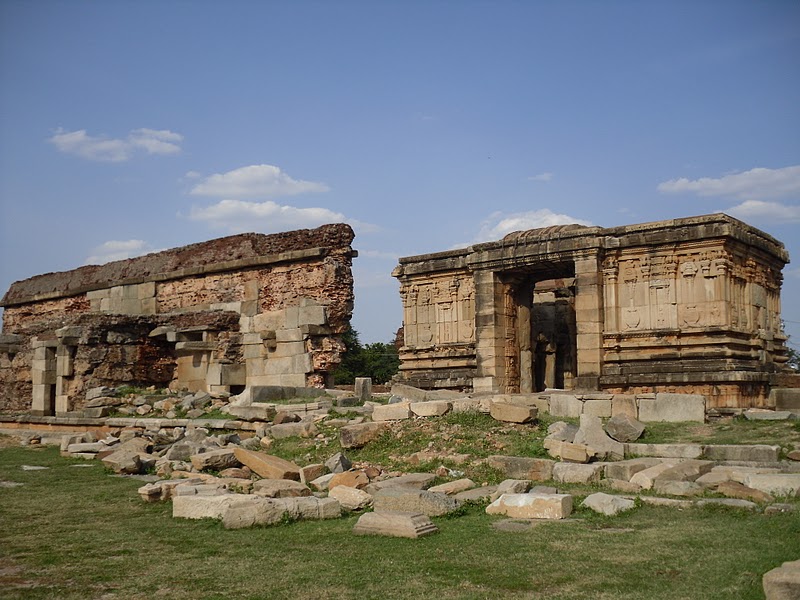 Inside the temple, all we could see was the structure in ruins, rocks strewn every where. Only a gopuram, a ruined Garbha Griha and mandapas remain today. 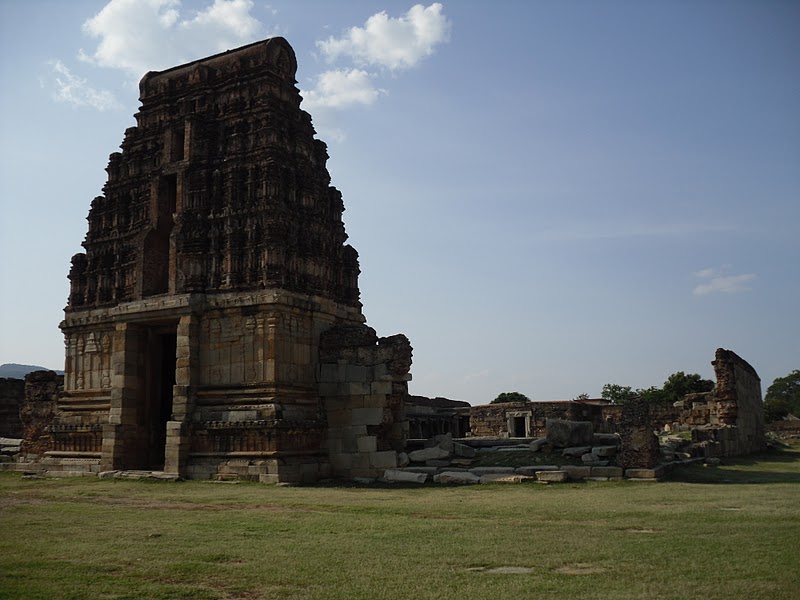 Only a part of the prahari or the outer wall is left, it looks like a high fort wall. 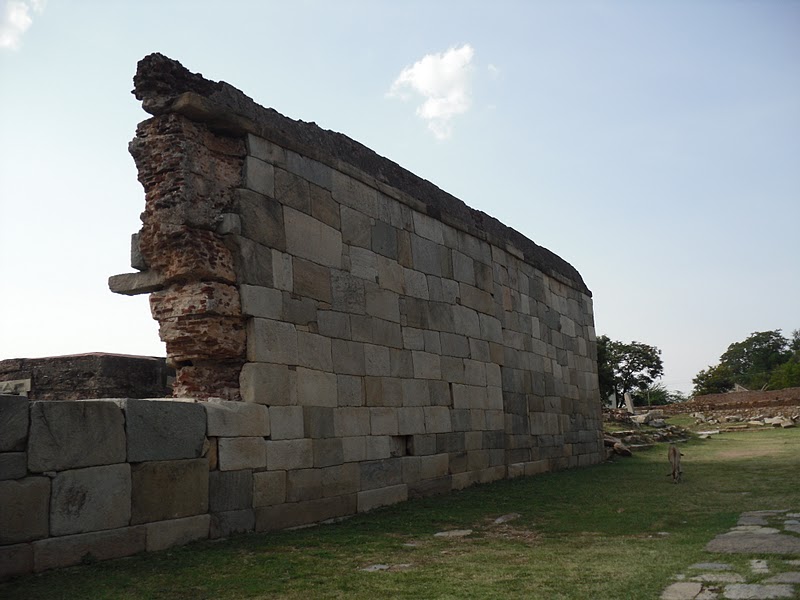 There is a small structure behind the gopuram, which must have been the Garbha Griha. 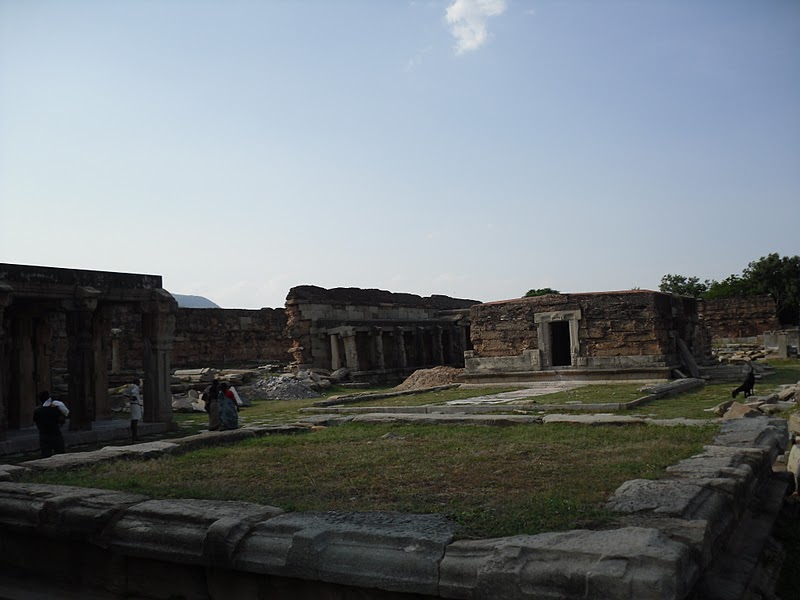 Inside the sanctum sanctorum, there was a small pedestal on the floor, the idol of the Deity must have stood here. Who was the Lord of the temple? Who stood here and received the prayers and worship of devotees centuries ago?

The mandapas around the temple were in such a ruined state that they looked ready to collapse if you so much as touched them. 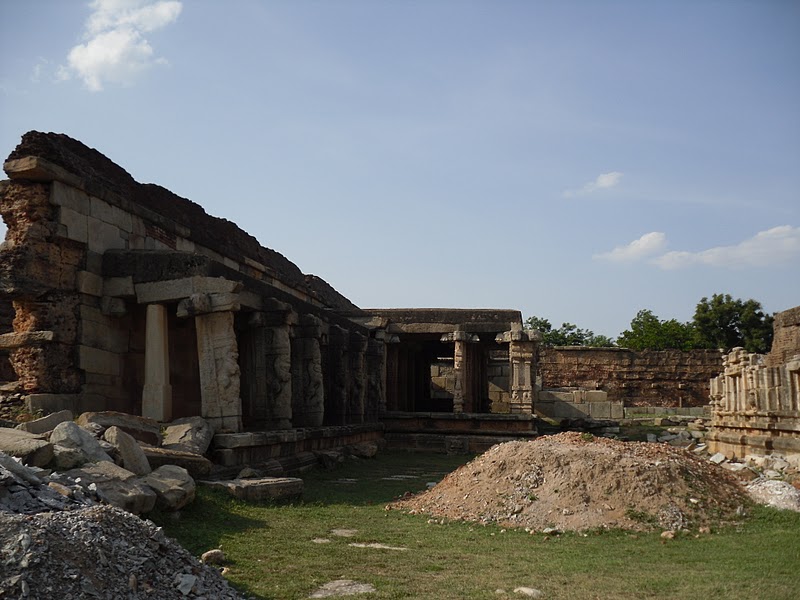 From the temple building structure and style, it looked like the temples at Hampi. The famous Udayagiri Fort of the Gajapathi Kings and Vijayanagar Kings lies a few kilometers from the temple. The temple was probably built during their reign.

We walked around the temple feeling very sorry at the plight of such an ancient beauty. There was a rock edict, the ancient Telugu made it impossible for us to read it.

With a heavy heart, we left the temple and drove back to Nellore.

Later, we did a little research on the internet and found the temple listed on the ASI website as a protected monument. The website says, there is no clear knowledge of the temple’s actual history, it was a temple of Lord Vishnu in the form of Ranganatha. It seems the idol was removed during the regin of Sri Krishna Devaraya and placed in the famous Ranganayakula Temple at Nellore to evade an attack during a Muslim invasion. Our guess about the temple existing during the Vijayanagar reign turned out right ! We were glad to know that atleast a small part of the temple’s history was recorded.

There are so many temples, forts and structures in India that have no known historical records. Will we ever be able to give the remnants of a golden period of our history, the respect they deserve?