The idea behind a trip to Ahobilam came up out of the blue, out of some casual, idle browsing of the internet. A few travelogues sharing the trek experiences was enough to give us a brain wave. Until then, Ahobilam only meant a famous pilgrim centre, we had no idea that Ahobilam was also a trekker’s paradise. Goes to show how little we really know about places we simply take for granted.

Before we knew, a trip to Ahobilam was planned. It was the first time we were making a trip as a big group and the planning was made easy because one of the guys knew someone working in the Endowments Department. Republic Day, 2012 fell on a Thursday, so we planned a two day trip to Ahobilam.

Ahobilam is one of the most important religious centres dedicated to Lord Narasimha. It is one of the most important 108 Divya Desams dedicated to Lord Vishnu. Located in the Nallamala Hill range in Andhra Pradesh, apart from being a pilgrim centre, the other chief attraction of Ahobilam is adventure trekking to the 9 Narasimha temples located in the thick forests of the surrounding hills and that was our target.

A 9 member team set off from Hyderabad in 3 cars, 2 Figos and a Chervy Spark, fondly called the “Gas Gaadi” because it ran on CNG. We started from Hyderabad around 7 AM. From Hyderabad, Ahobilam is close to 350 kms via Kurnool and Nandyal. The other popular pilgrim centres like Mahanadi and Yaganti are also close to Ahobilam, most people cover Ahobilam, Mahanandi and Yaganti in one trip. Our interest though was the Ahobilam trek.

Hyderabad to Kurnool on NH7 takes exactly 2 hours if one drives non-stop, unless you are foodie like us who has to make the mandatory breakfast stop. We stopped at Jadcherla, 45 minutes from Hyderabad for a breakfast of idly, dosa and vada – the Holy Trinity if you worship food !

On this highway, at speeds averaging 120 km/hr, you won’t even realise when Kurnool arrives until you see the Thungabhadra river and if you are travelling to Ahobilam, this is where you have to take leave of the NH and head on to the State Highways. The NHs and SHs are a world apart but the road from Kurnool to Nandyal and to Ahobilam, though a double road, was decent enough.

We reached Ahobilam by lunch time. We first went to check our accommodation reserved at the temple run cottage with the help of our contact at the Endowments Department. We were in for a surprise because of the 3 rooms we had requested, only one was available because some VIP was visiting and had taken over the entire building ! Well, if it is a matter of a VIP, VIPs (Very Insignificant People) like us can’t do much, so we let it be and freshened up in the only room available.

Lunch was arranged at the temple dining area where they serve free meals as temple prasadam. This meal is served every day at lunch time and open to all devotees, since we were going to reach slightly late, we had informed them before hand. The food is simple and traditional and you will love the humble experience of a common meal.

One interesting thing about Ahobilam is that in a place where the Narasimha avatar of Lord Vishnu is worshiped, the Varaha avatar is more prominent. We mean pigs, Ahobilam seems to have a huge population of pigs, some of them were so aggressive that we had to get out of the way!

Post lunch, we got down to the actual business. Ahobilam has two main areas – Diguva (Lower) Ahobilam and Eguva (Upper Ahobilam). Diguva Ahobilam is located at the foothills of the Nallamala range. The main temple of Ahobilam called the Prahalada Varadha Temple is located at Lower Ahobilam. Eguva Ahobilam is located in the hills on an 8 km ghat road and houses the Ahobila Narasimha temple. In addition to these two primary temples, there are 8 other temples for Lord Narasimha and two other spots associated with the Hindu Mythology – the entire set forms part of the Ahobilam trek.

The Nava Narasimha temples or the 9 temples are:

2. Karanja Narasimha, located on the way to Upper Ahobilam

3. Malola Narasimha, can only be reached by a 2 km trek from Upper Ahobilam Temple

Apart from the 9 Narasimha temples, there are two other important spots – Prahalada Badi or Prahalada’s school and Ugra Sthambam, a huge rock which is believed to be the pillar from where Lord Narasimha emerged.

There is a map of the location of all 9 temples and the other two spots at the Temple Guest House, it is of great help in planning the trek. Of all the places, the trek to Ugra Sthambam is supposed to be the toughest and risky.

Ahobilam is associated with legends and stories, its exact history is not very clear but from whatever information is available, the temple has been in existence for atleast a 1000 years. As for mythology and legends, the entire story of Narasimha avatar and killing of the demon king Hiranyakashipu is believed to have taken place here, the first of the stories any Hindu kid grows up listening to !

It was 3 PM by then, the main temple at Lower Ahobilam was closed and would open only after 5 PM, so we decided to complete visits to the temples that were easier to trek. The difficult treks were put off to the next day because we had to get back before darkness. We went to the Administrative office to find someone who would come along to guide us, it is advisable to take someone to guide you to avoid getting lost in the forest !

We drove to Upper Ahobilam, the 8 km ghat road is good, surrounded by dense forests on all sides. Half way up, we stopped at the Karanja Narasimha Temple, first of the Nava Narasimha temples we visited. The 9 temples are actually small shrines, this one is called the Karanja Narasimha because it is located under a Karanji tree, the temple is right beside the road. The entire forest area is full of different species of birds and we had a bird enthusiast among us who pointed out some interesting ones, we even followed an Asian Paradise Flycatcher into the woods but it kept flying away with a whoosh of its long tail and hiding itself ! This was temple no.1 that we visited.

From the Karanja Narasimha temple, we went to the Ahobila Narasimha temple, which is the primary temple at Upper Ahobilam and also the central point from where the treks to other temples branch out. Near the parking lot, there is a U-shaped rock, that looks like Lord Vishnu’s namam. During the rainy season, there is a waterfall from the rock.

From here, one has to climb around 70 very steep steps to reach the temple, these 70 steps will leave you too tired to even think of other treks ! The Ahobila Narasimha temple is inside a small cave, the idol is engraved on a rock. Ahobila Narasimha was temple n0. 2 in our list.

Treks to other temples at Upper Ahobilam begin from here. Just to the left of the gopuram, there is a small entrance leading to the starting point of the treks. On the other side of the entrance you walk into the forest. There is a picturesque yet scary looking bridge leading to the trek pathways. The bridge is built along the temple wall with iron rods holding it up, below is a rock strewn stream path. You don’t want to imagine what would happen if the iron rods or the wood planks give away ! 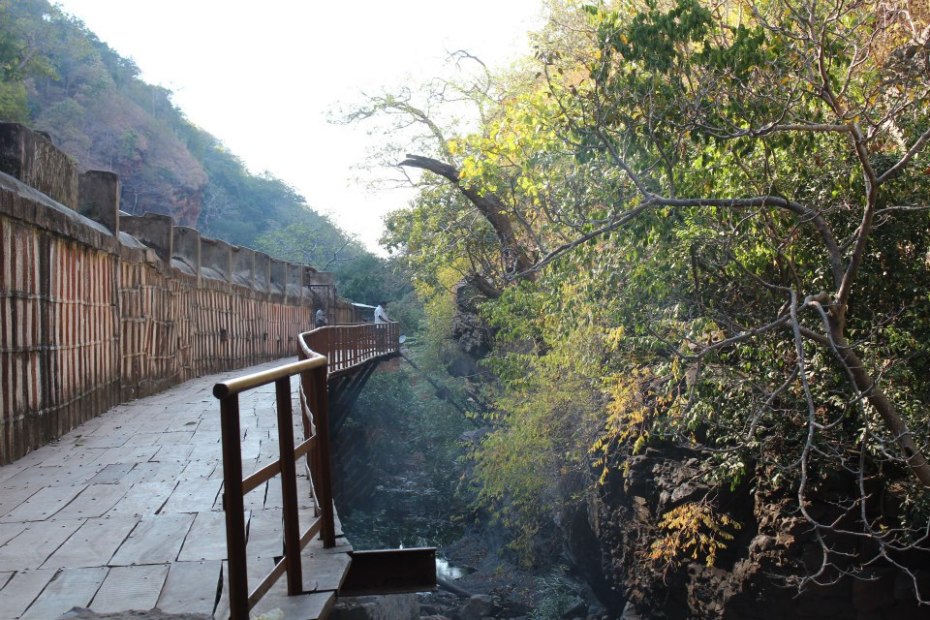 The walk is over boulders so wooden bridges like this have been built for convenience. It turns out to be an inconvenience because monkeys use these places to have a chit chat session. Most of the time they don’t seem to bother about people but one can never predict monkey business ! 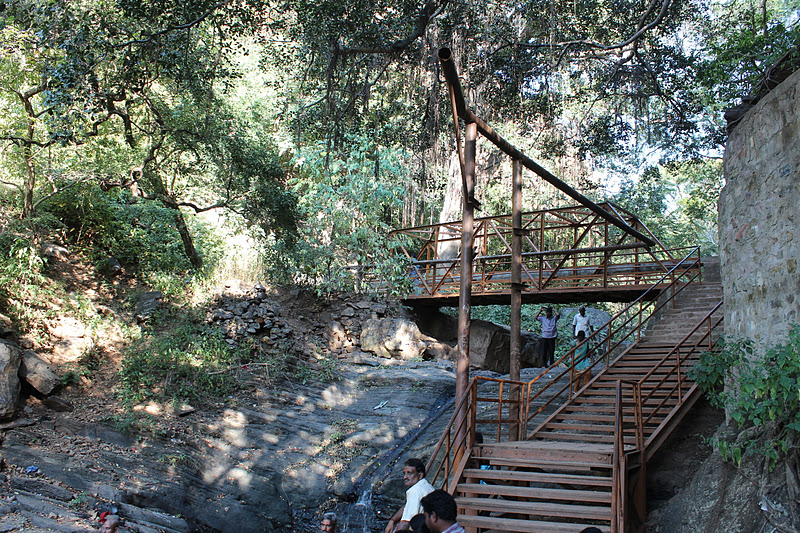 Beyond this bridge, the pathway deviates into the different directions leading to the temples. The Krodha Narasimha Temple is also located here but we chose to visit the Malola Narasimha Temple, 2 kms away and Prahalada Badi, both located in the same direction.

A little walk ahead, we found an ancient mandapa that must have been resting place for devotees.

Look at the precision in placing of the pillars of the mandapa, they seem to have taken so much care even for a way side resting place. 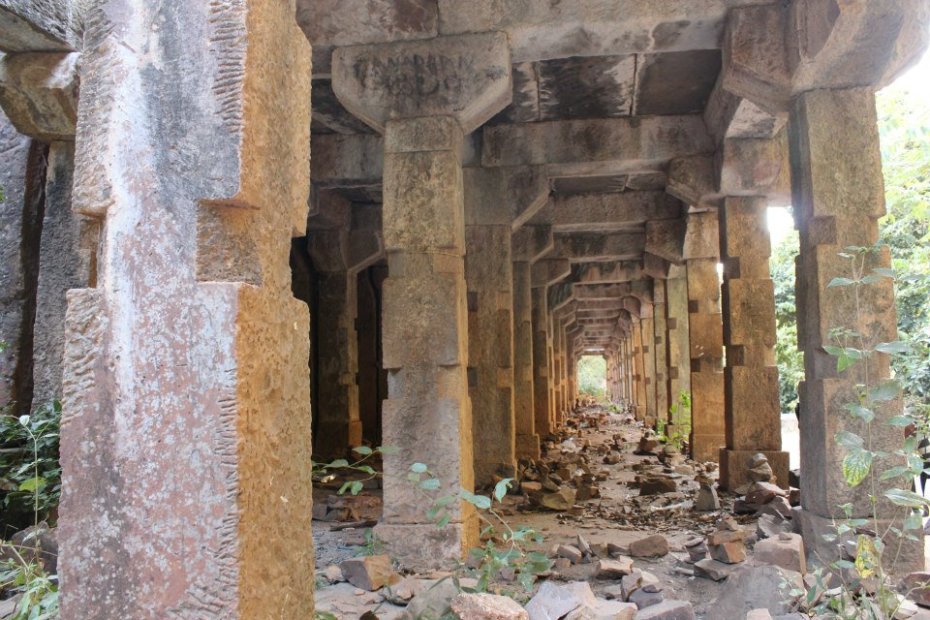 From here the pathway becomes steep with steps cut out of rocks. 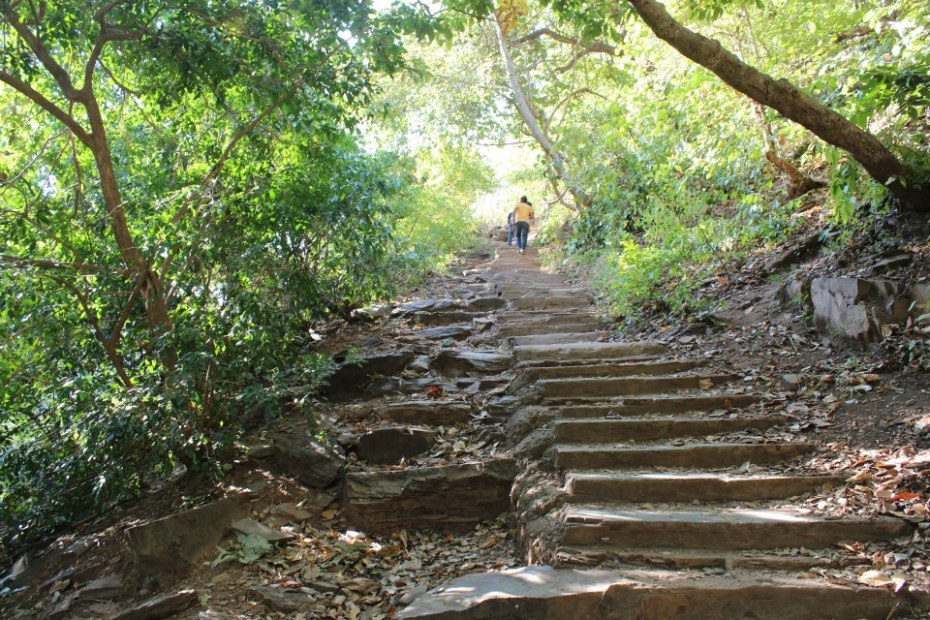 The steps end in an even steeper rock path that goes over the edge of the hill, one look down is enough to make your head swirl but you will enjoy the walk surrounded by nature on all sides.

After half an hour trek, we reached the Malola Narasimha Temple.

To the left of the temple, there is a passage leading to Prahalada Badi or Prahalada’s school, it is 1 km trek from the temple. The trek is similar to the previous trek, except at the end where there are steps right on the edge and deep valley below. We had to be very cautious here. 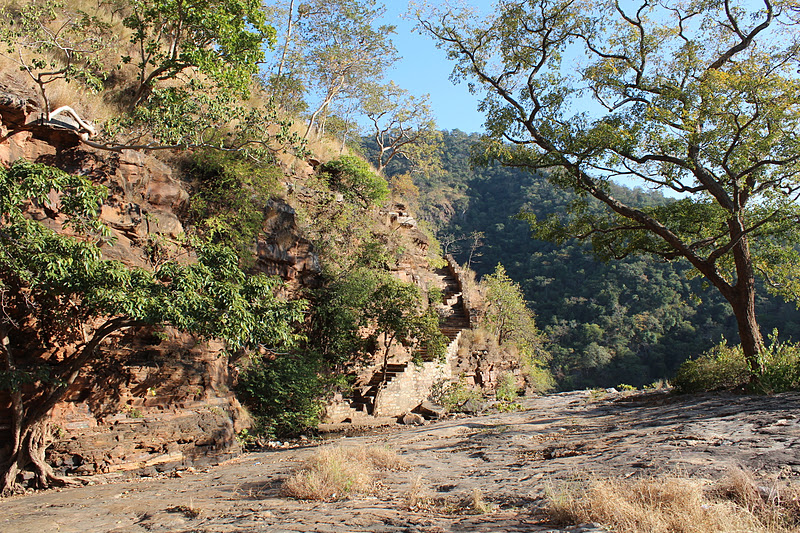 Prahalada Badi is a flat, rocky area on the hill. This is where Prahalada is believed to have attended gurukul, residential schools of the Krta or Satya Yuga !

The place is so silent and peaceful, we concluded that must have been the reason why Prahalada became a scholar at such a young age.

There is another temple inside a tiny cave here, the Narasimha idol is believed to have been installed by Prahalada himself. The steps leading upto this temple are in such a ruined state, it is not for the weak-hearted.

We sat in the school area for a while hoping to catch some of Prahalada’s wisdom but then realised, some people are just hopeless !

The drive back to Lower Ahobilam was beautiful as the sun was setting in the valley and we drove through the forest that turned gold in the blaze of the setting sun. We wanted to stop and take pictures but preferred to just sit back and relish the views.

It was 6 PM when we reached Diguva Ahobilam. We visited the Prahalada Varadha Temple. Even on a public holiday, surprisingly, the temple was not crowded and we had a quick darshan.

After the darshan, we waited at the Administrative office for information regarding accommodation, we waited for almost an hour and whiled time swatting swarms of mosquitoes ! We then decided to hunt for accommodation because all 9 of us could not fit into a single room. We found a small choultry near the temple to stay for the night. We split up into two groups, one group staying at the temple guest house and the other at the choultry, not a great place but enough for one night if one is able to adjust. AP Tourism also has Haritha Hotel at Ahobilam but accommodation has to be booked in advance.

The entire town of Ahobilam is centred around the temple. There are hardly any residential areas, just a few shops and very few hotels. We found a Kannada hotel near the temple where we were served a hot meal for dinner. This seemed to be the only decent place to eat. In tiny towns like this, the day ends very early. By 9 PM, the entire town had gone to bed, the roads were deserted when we went for a walk. Having nothing else to do, we too joined the rest of the town and hit the sack.

Every corner of Ahobilam resounds with the story of Prahalada and Lord Narasimha, one gets the feeling of living in the mythological world !