Kerala Tourism promotes the state as “God’s own Country”, Kerala is included in the list of ten paradises in the world and is ranked among top 50 destinations of a lifetime and so on – “what’s the hype about?” was playing on the mind for many years. Wayanad shut this writer up once and for all!

God’s own country in every sense !

Day 3 woke us up much before sunrise. Actually, one can hardly see sunrise on the mountains of Wayanad because there is always a thick cloud cover, even in peak summer. As the day brightened, we got the first glimpse of the view from our homestay, Valley View Avenue, which left us overwhelmed to even think straight. We couldn’t make it out in the night but the homestay was on the top of a slope and there were huge cloud covered mountains before us from where the waterfall wished us a “good morning” as it merrily flowed down the mountain. 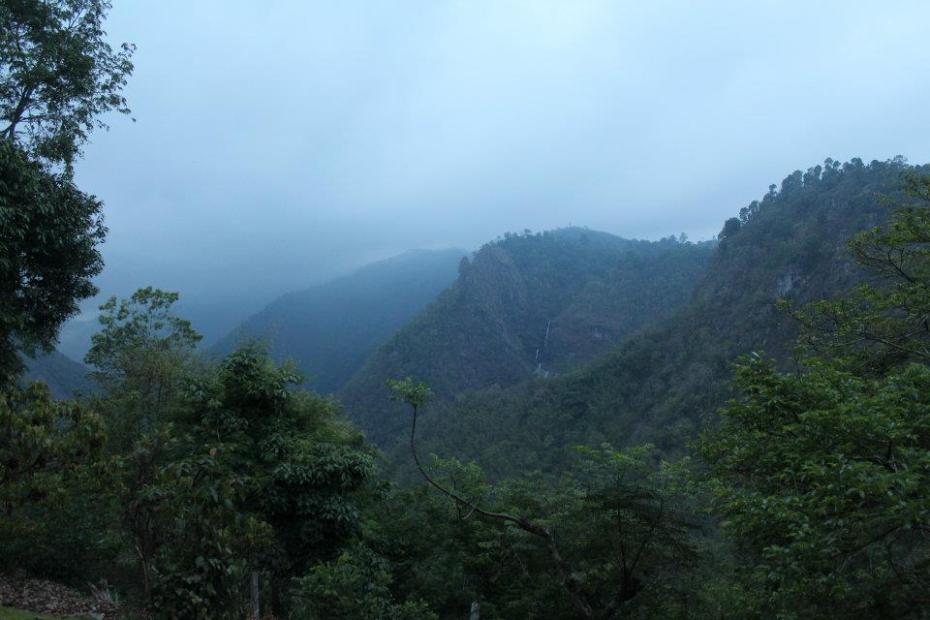 It was breathtaking, mind-numbing, insanely beautiful ! We had not seen anything like that in our lives until then.

Standing here, we just kept staring at the scene before us, unable to find words to describe it.

All we could do was click pictures like we had gone mad ! We clicked pictures of the view from the dining area,

from our rooms, now this is what you would call “A room with a view”.

It looked like the view decided to follow us into every corner of the homestay, wherever we went, we just stopped and sighed at the beauty, we did not even realise that we had not even washed our faces since we woke up !

Hot cups of super strong coffee were savoured with the enchanting view as an accompaniment. Every time we looked up, it looked more beautiful. With the scenery and the coffee giving us a kick, we went around exploring the homestay.

The homestay is very picturesque, located amidst thick woods ending in a mountain slope. 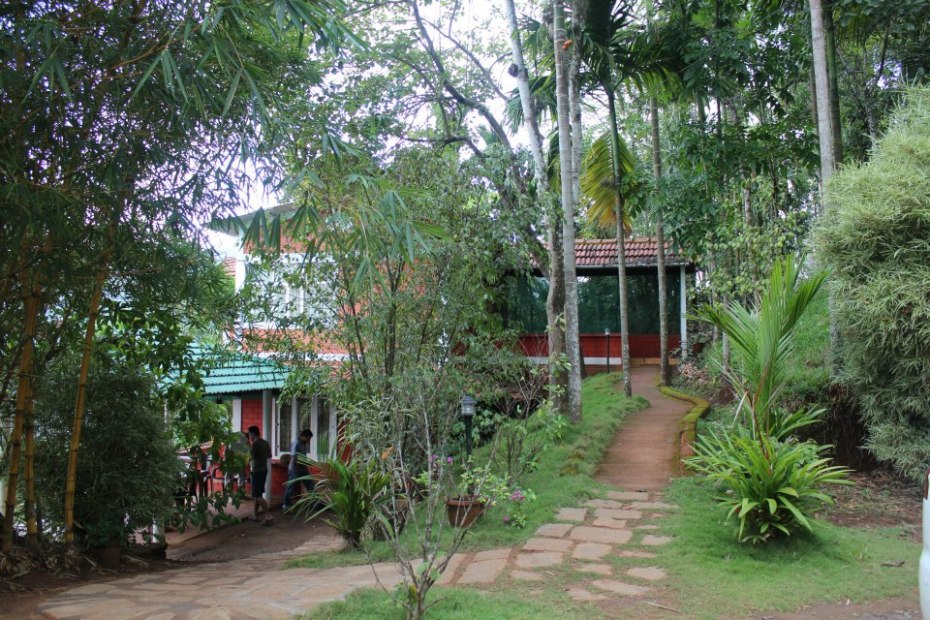 The entire path leading to the homestay is bordered with greenery, predominantly jackfruit trees, we picked up one huge jackfruit that had ripened and fallen from the tree.

Further down the slope, there were a few families living in the area, it was such a refreshing sight to see the smoke from their chimneys early in the morning. The men became boys as they plucked different varieties of fruits from the many fruit laden trees around.

We even found a pineapple but didn’t pluck it because it was sitting pretty between the leaves ! 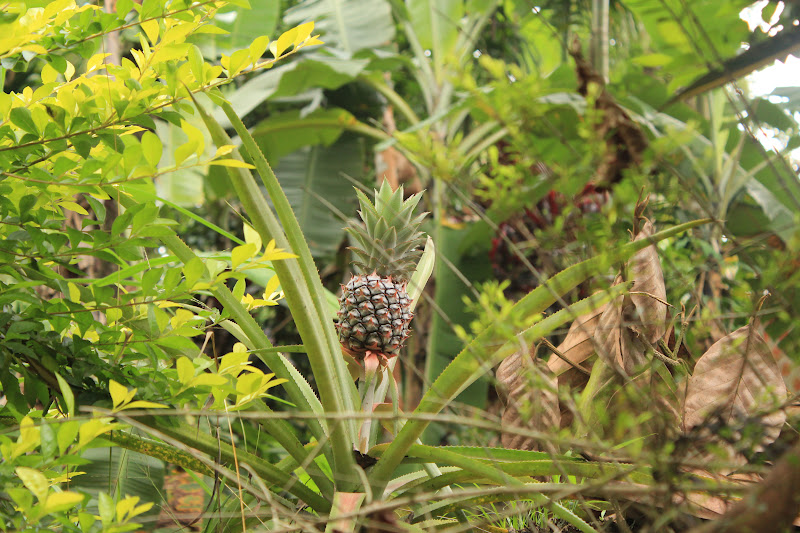 The homestay is run by Mr.Jenoy, a very pleasant and friendly person who goes out of his way to make you comfortable. There is also an attendant, Mr.Joby who is has a warm smile always. This is where Mr.Jenoy lives, a simple, cozy cottage nestled in the middle of nature at its best – what life ! 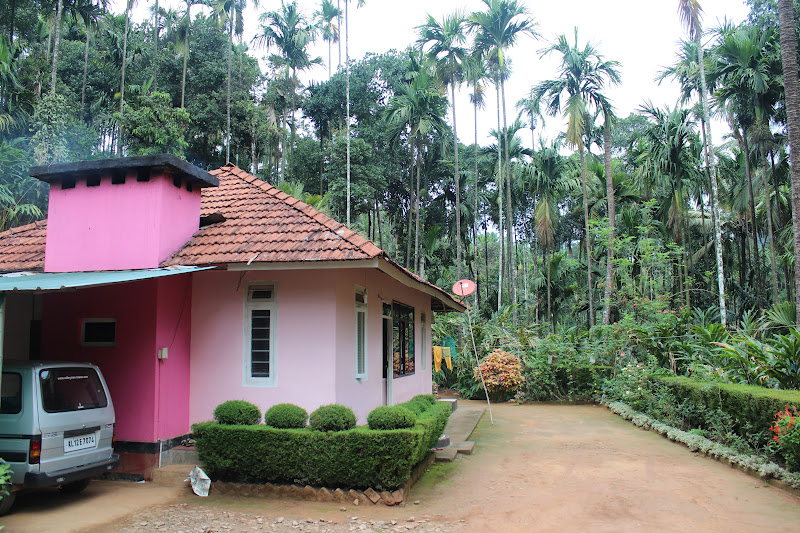 Breakfast was waiting for us when we went back, piping hot pooris and potato curry. The hot pooris, cool weather and the great view made a perfect combination, topped with round after round of coffee. It tasted like filter coffee but it seems it was the usual instant coffee, it is a skill to make instant coffee taste like filter coffee, the once upon a time Bru coffee advertisement (“Filter coffee?? Idhu Bru, Ma!”) made perfect sense !

Local sight-seeing was up next. Wayanad has quite a number of local sight-seeing options including waterfalls, lakes, treks, caves. The Edakkal Caves have prehistoric drawings/writings dating back to atleast 7000 thousand years, a history lover would give anything to visit those caves but no matter what we were ready to give, we couldn’t visit them that day because it was a Monday and ASI maintained sites are closed on Mondays. So the next option was the Kanthanpara Waterfalls, a 15 minute walk from our homestay. The walk was through a winding, narrow road, where one had to get off the road to let other people and vehicles pass by !

Wayanad must be a treasure house of waterfalls with those huge mountains. Kanthanpara Falls are one of those many, some inaccessible waterfalls. Kanthanpara Falls are very elegant and cascade down a slope to form a pool at the bottom. We were highly impressed with the waterfalls that had lot of water even in Summer, unlike those in Andhra Pradesh which are reduced to a trickle in Summer, you feel so sorry for them, you would want to pour water from your water cans ! One can walk along the falls from where they start to right down to the end, it is a relatively easy trek on the rocks. 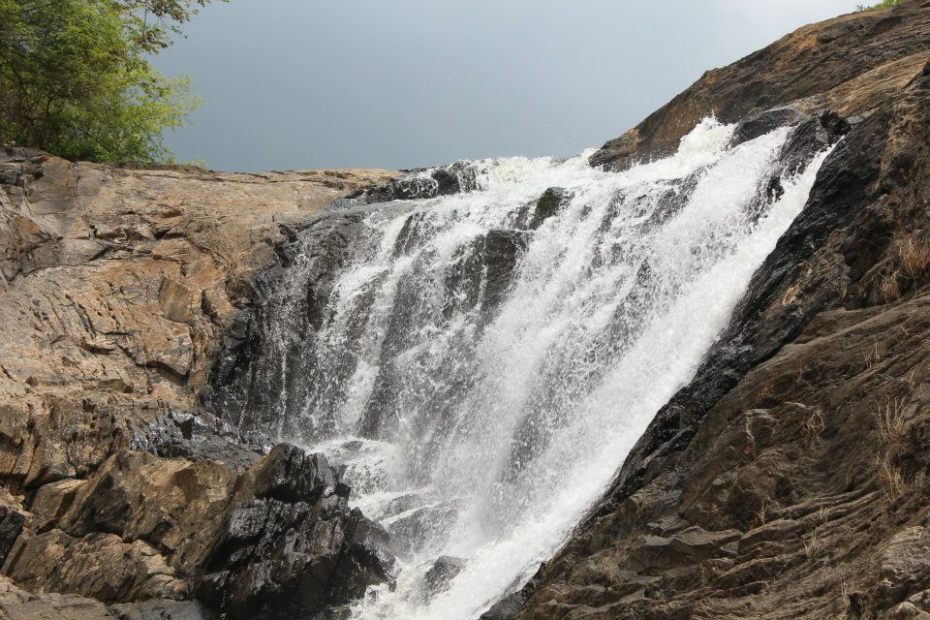 A waterfall like this meant an elaborate photo session of the waterfalls from different angles !

The boys had fun going right down to the pool, splashing around and posing for pictures. For others it was a feast for the eyes. No matter how many waterfalls you visit and how frequently you get to see them, they never cease to fascinate, you cannot but wonder at the sheer force of water gushing down in a roar !

The walk back was not as easy, it was almost noon, it got a little hot and we had exerted ourselves at the waterfall. The road back to the homestay was steep and we were short of breath on our way to the homestay. Enroute, we got some superb views of the huge mountains in the background that were covered by clouds when we first went to the waterfall in the morning. In the excitement of taking pictures, this writer did not notice an electric fencing and had a narrow escape thanks to an alert friend !

Lunch in the clouds

It was lunch time by then, the menu included the famous Kerala fish curry and jackfruit fry, the recipe was shared by one of our boys, who hails from East Godavari district of Andhra Pradesh where the dish is very popular. The food is cooked by Mr.Jenoy’s wife and his mother, so one can be treated to authentic home made Kerala food, they also sportingly prepared the jackfruit fry as per our request. The food was served on the banana leaves that we picked from the estate, even costliest plates cannot match the taste of eating from banana leaves !

Halfway through lunch, the entire place went under a cloud cover and it looked like it was covered completely by a white sheet. Even as we looked on, clouds after clouds covered the mountains. It was such an unbelievable sight that we got up from lunch to click pictures.

One group of clouds cleared to make way for another set.

The rocks peeping out of the clouds looked like steps to heaven !

True, it was a heavenly experience !

The clouds finally cleared every where and settled down on the mountain that had our waterfall.

We finished our lunch, stared at the scenes for as long as we could and chatted, in places like Wayanad, time is a dimension that is forgotten.

Then we decided to visit the Pookote Lake nearby. The drive to the lake was through tea estates, it felt like driving in between a green carpet. The famous Rippon tea plantations are at Wayanad. At one place, we stopped to click some pictures. As usual the clouds had descended on to the mountains. As we were looking, the clouds cleared a bit and revealed a grey mountain that seemed never ending. We could only gape, wonder struck, when we realised that the grey patch way, way above the clouds was actually a huge peak ! It was beautiful, awesome and frightening – all at once ! 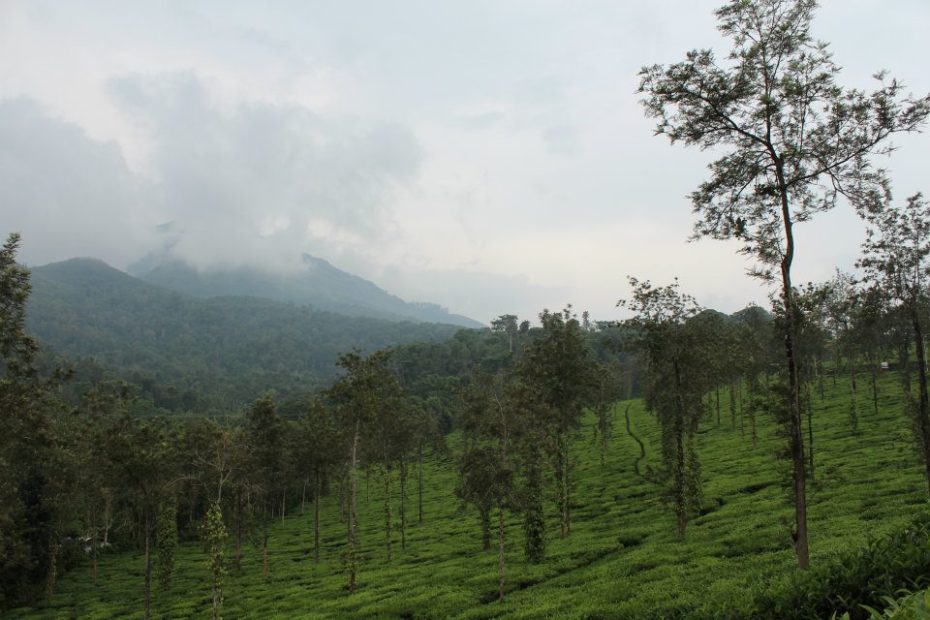 We reached Pookote Lake around 5 PM. It being a Sunday, the place was over crowded, vehicles were parked almost half a kilometer away. The lake area is closed for visitors by 6 PM. There were too many people, having seen hardly anybody at the homestay, it felt like we had come to a different world, we couldn’t associate ourselves among people !! The heavy crowd seemed to rob the peace of the place but the lake was very serene.

One can go boating on the lake, we gave it a miss because there was a long queue. There is a walkway around the entire radius of the lake, the walk around here is very pleasant under a canopy of green trees. The walk takes around 45 minutes and is much more relaxing than the boating. The lake is filled with pretty water lily flowers. 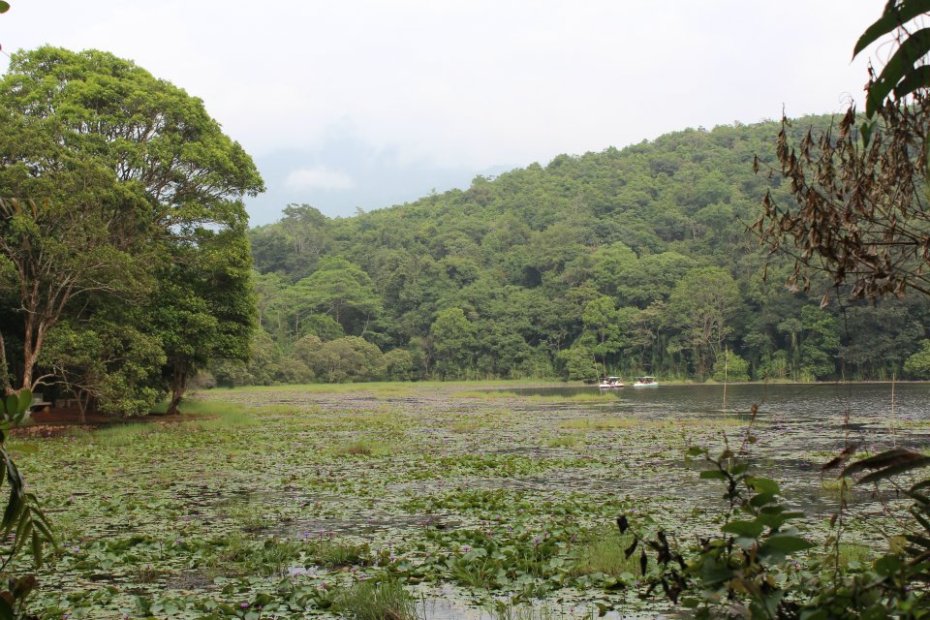 There is also a small souvenir shop selling Kerala handicrafts. The handicrafts are quite attractive but equally expensive, we wanted to buy something to bring back as a memory but the cost was a big put off.

Done with the lake, we drove back to the homestay and went back to doing our favourite thing – sipping hot tea, chatting and drinking in the sights. Despite the summer, the area was very cool and pleasant. As twilight time neared, the sun, unable to fight through the thick clouds, paled down its bright orange to pink ! The whiteness we were used to the entire day was suddenly pink all over. If we were to paint the scenes we had seen since morning, we would have exhausted all the colours on our painting box !

Darkness took over slowly. There was complete silence except for the waterfall jabbering on non-stop. We had a music session of evergreen hits of the 60s and tried to match the waterfall with our non-stop chatting. Once again the clouds launched an attack, this time, they passed over us. We could see our own shadows on the thick cloud cover ! We tried to capture our shadows on the clouds but it was too dark for our cameras. The camera flash could only catch the vapour of the clouds.

We also had a visitor – a glowing blue coloured bird, it had blue feathers that glowed in the dark which made it look like a glow toy ! We tried to capture it on the camera but it was too quick for us, it flew over our heads, onto the ceiling, on treetops and eventually disappeared in the darkness!

Soon it was dinner time and we were treated to another round of mouth watering food. The payasam that was served as a dessert was so good that we not only licked the bowl clean but also asked for one more big bowl, poor Mr.Joby must have given up his share for us !

We finally wound up, after gossiping into the night. There was only one thought on the mind – If God had really chosen Kerala as his own country, well, Dear God, it was a great choice !