Like all good things, our road trip across Malanadu was coming to an end. On 2nd October, the last day of the trip, we woke up to a heavily raining morning. We were up and ready by 6.30 AM to visit the Gokarna Mahabala Deva or Mahabaleshwar temple. We were to start back to Hyderabad after a visit to the temple and to the OM Beach.

We drove to the temple as it poured and poured outside. There is a legend associated with this temple which says that Ravana obtained the Atma Linga from Lord Shiva at Kailash and was returning back to Lanka. The Atma Linga was not supposed to be placed on the ground for it would get stuck to the ground. To prevent somebody like Ravana from having possession of a powerful weapon like Atma Linga, Lord Ganesha disguised as a young cowherd tricked Ravana while the latter was doing his evening prayers and placed the Atma Linga on the ground and the Atma Linga wouldn’t budge from there. The place where that incident happened is now the famous pilgrimage centre, Gokarna.

The Gokarna temple is simple and was almost deserted early in the morning.

The Atma Linga is actually under the ground and one can only touch the upper part of the Linga. It seems the entire Linga can be viewed only once in 30 years. We were not told how many years it was since the last 30 year darshan.

From the temple, our next stop was OM Beach. At the entrance of the Gokarna town, there was a board which read Gokarna Temple – 9 kms, OM Beach 10 kms, so our understanding was that OM Beach was 1 km from the temple. As we drove in the heavy rain, the distance to OM Beach seemed to vary, while some boards said 4 kms, others indiciated 9 kms. The route was not clear too, it took us some time to understand that the OM Beach was not 1 km from the temple but 1o kms from the sign board on a different route ! In the entire confusion, Eagle 1 disappeared.

After getting lost and finding our way, we managed to reach OM Beach, Eagle 1 was still missing, the mobile signals were weak and we could not understand where they were lost.

OM Beach gets its name because from a viewpoint on the nearby hills, the beach is in the shape of the Devanagari symbol of OM. You could say it also looks like 3.  From the viewpoint where the road leads to, it looks like an inverted OM/3.

OM or 3, the rock strewn beach is lovely.

A few steps from the view point lead you down to the beach. It was still drizzling when we reached the beach, the sea seemed very calm with no waves, you could actually mistake it for a gigantic lake ! 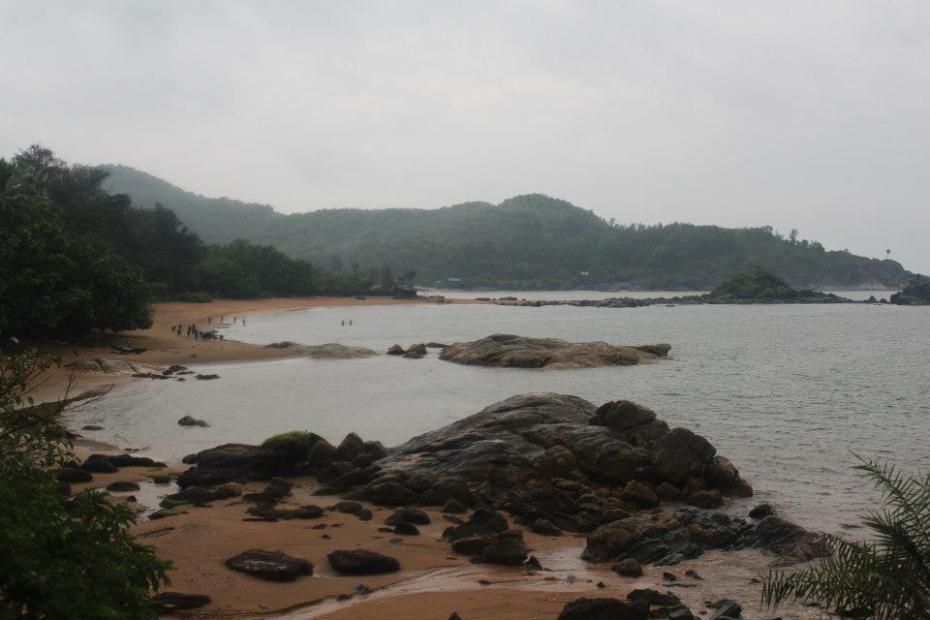 Beaches are always so much fun, once you get your feet in the water, it is difficult to get yourself out. We had planned for a 45 minute visit but it was all soon forgotten. Eagle 1 finally found its way and made it to the beach, it seems they wanted to see the actual OM shape and went off on a road where they had to meditate on OM to keep their cool ! The boys had a whale of a time swimming, jumping, posing for pictures, some of them coming out of water could give John Abraham a run for his money !

As morning drew on, the sea became rough and we decided it was time to head back. There are 2 other famous beaches here the Paradise Beach and Half Moon Beach but we gave them a miss because we were running short of time.

While returning back to Makara Village, we spotted a car garage. Since it was a long way back home, we thought it was good idea to get Eagle 2’s tyre fixed. It turned out the the tyre’s valve was a goner and had to replaced. The garage had only one new valve and the mechanic in his enthusiasm to impress us tried so hard that the only available valve broke and we couldn’t do anything else other than dumping the rim and tyre in the boot and heading back ! The entire exercise cost us almost an hour and Rs.24 for a watery, tasteless chai but how can you go without chai on a rainy morning, especially when a hot kettle sits right in front you, too tempting to let go !

Back at the resort, we scrambled here and there to get ready to leave, gobbled down a heavy breakfast of Upma, Bread/butter/Omlette. Makara Village Resort is a great place to stay at Gokarna. 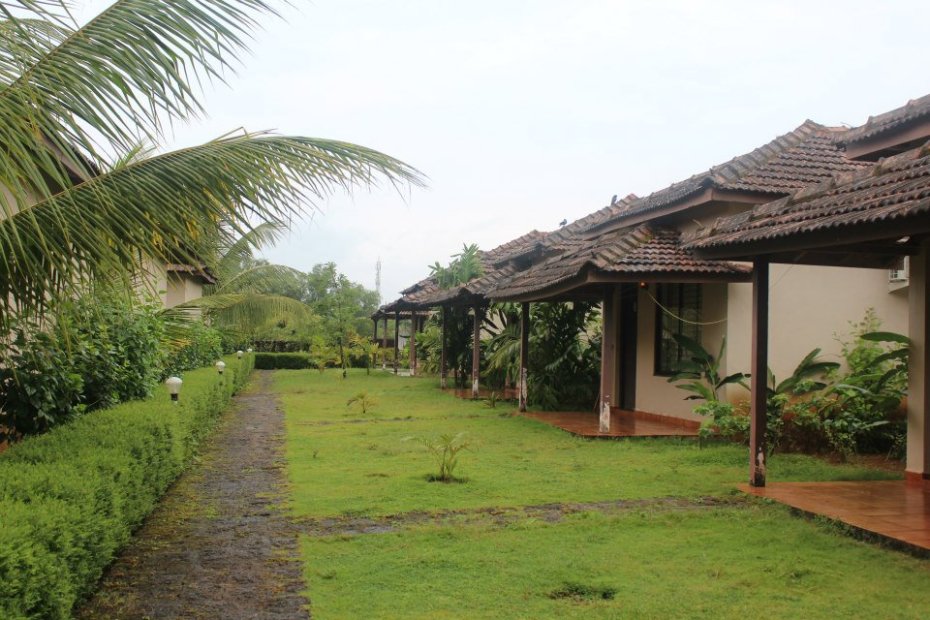 Soon we were ready to get, set and go, homeward bound ! The drive back home was 650 kms through Hubli, Bijapur and Gulbarga, we chose this route because the entire stretch was NH 218. It was 12 noon when we started our journey back. The plan was to stop at Hubli which was 150 kms away,  one of the guys had to board a train at 7 PM from Hubli to his hometown, we had estimated a 2 hour journey, ideal to drop him off and stop for lunch.

Ditched by the road

We reached Hubli in decent time by 2.30 PM, gave Eagle 2’s tyre a new lease of life and entered the town to have lunch. The famous Kamat Hotels are headquartered in Hubli and for foodies, it was like a pilgrimage. One look inside the hotel confirmed the pilgrimage idea because the crowd there was no less in comparison to Tirupati. There was a waiting time of 45 minutes, the manager told us very proudly ! Every other hotel all over Hubli was overflowing with people, looked like the entire population of Hubli town decided to close their kitchens that day ! We had wasted more than an hour in looking for hotels, gave up and dropped one of our guys at the railway station as he was headed to his hometown. People on Eagle 1, on the way back from the railway station, found a hotel and reserved seats but Eagle 2 and 3 were in some other corner of the town and driving back in the traffic meant more time lost and so branding Hubli as an inhospitable town, which couldn’t feed its visitors, we resumed our journey at 3.30 PM without stopping for lunch. The 4 day old Karachi biscuits and warm Tropicana fruit juice were our saviours.

By then, we stopped complaining about the roads because they began to get worse by the minute, hours flew by but the kilometers refused to move even at a snail’s pace. At 6PM, we were still at Bagalkot, stopping for a cup of tea as rain lashed outside. The hotel guy tempted us with dosas if we were willing to wait for 15 mins, we gave in to the temptation, only to be told half an hour later that there was a technical problem with dosa batter and the dosas were not working out ! One of the good things about traveling is that it throws up some insane situations that teach you to laugh when you actually want to break something.

We had grand plans of visiting the Gol Gumbaz at Bijapur and we got to see the silhouette of the Gol Gumbaz in the 7 PM darkness. The only time pass in between was a huge river bridge that we crossed somewhere after Bagalkot, the bridge seemed never ending and even after 1 hour of browsing, Google could not tell us what that bridge was, all we could get was that it was the Ghataprabha River.

We stopped making time estimations and counting kilometers, the phrase “the road is pathetic” was banned because of its over dose. At 9 PM, we landed in the dingiest of dhabas near Gulbarga, who served us one of the tastiest dinners we had in the trip. The dal fry and tomato fry was so good that if we didn’t have a milestone reminding us of the scary distance we had to travel, we would have gone on feasting the whole night !

A train journey by car

By 10.30 PM, we were on the road again with home 220 kms away. People drove on with numb minds, some slept, some chatted on, some like this writer blabbered in a semi-conscious state and had to recheck every now and then if something was said in a dream or actually spoken ! There was nothing left to be said about the road because there was no road anymore, it was now only a surface where vehicles lumbered on .

A good 3 hours later, we stopped for a cup of tea at 1.30 AM, a welcome break which pepped us up for a while. Close to 3.30 AM, we were in the precincts of Zaheerabad, the 4 way and the supposedly better road was anything but better. NH 218’s betrayal shall go down as the greatest of all, not even Brutus comes close !

At 4.30 AM as the day began to dawn, the distance to Hyderabad came down to double digits and we could have cried for joy when the ORR finally made its appearance. We split up from here, headed to the direction of our homes, it was 5.30 AM when we reached Hyderabad and home after a 18 hour long marathon drive ! The drive was almost like a train journey, you board the train in the evening and reach your destination the next morning !

Some of the guys who worked on morning shifts just had enough time to go home and rush to work, while the rest did not know how and when they reached home and crashed on the bed. The spirit of our team deserves an ovation because everybody turned up at work the same afternoon !

Even before the trip was planned, one of our guys wanted to do something legendary during the long weekend. His wish came true and how ! We just have to ensure that people are careful and specific when they wish for something from now on !