Leaving Kondapalli, we reached Vijayawada, discussing history through the 20 minute drive. As you reach Vijayawada, a sign board proudly welcomes you to the city.

Vijayawada, the most important city in Andhra Pradesh after Hyderabad, is one of the busiest trade centres and railway junctions in the country. Its location on India map is strategic as it lies on the route to all major centres in the country. Adding to its attraction is the River Krishna on whose banks this city is located.

Vijayawada is one of the oldest cities in the state and has all the drawbacks of old cities, narrow, dusty, crowded roads, poor infrastructure, indiscipline and the like. All that apart, Vijayawada is the heartland of Andhra Pradesh, the centre of Telugu culture. The purest form of the Telugu language is spoken in Krishna District of which Vijayawada is a part.

When you talk about culture, food figures on the top of the list. Vijayawada specialises in authentic Andhra food and one of the most popular hotels in Vijayawada is Sri Ramayya Mess located in Governorpet, a happening market place with maddening traffic, crowd, diversions, one ways – in one word – chaos  ! Through this chaos, we went in circles in the same place to find Ramayya Mess.

Ramayya Mess is a very old hotel, yet its popularity remains unchanged over the years. At lunch time, the place is teeming with crowds. They have separate halls based on the rates, a separate AC hall for Rs.85/- meal, an AC hall for Rs.100/- meal and a non-AC hall for the regular Rs.60 meal ! A good idea for crowd management.

The hotel serves the best and authentic Andhra meal, complete with pickles, spicy powders, dals and Ulava Charu, a preparation made out of Horse Gram and a trademark cuisine of these parts, it is served with cream as an accompaniment. With food like this on our plates, we ate without a care in the world. We work hard all our lives for three square meals a day and when you have food like this, you feel like all your hard work has paid off !!

Too full to walk, we dragged ourselves to that car and again went in circles to find a decent hotel to check in to. A word of caution, if you plan to stay in Vijayawada, it is advisable to stay in 3 star class hotels even if it costs higher. Other hotels seem to have a bad reputation of police raids for illegal activities. One of the hotels told us they wouldn’t give accommodation if didn’t carry luggage when we walked in with a backpack, leaving our weeklong luggage in the car, they told us it was for our own safety because we would have to prove ourselves if there was a police raid. We ran out of that hotel !

AP Tourism runs a resort called Berm Park on the banks of River Krishna, the resort was full when we enquired. We, finally, checked into Hotel Manorama on M.G.Road, a safe bet. A standard double occupancy room costs Rs.1800 here. A quick break later, we set out to explore some more of Vijayawada.

Our next stop was Undavalli Caves. The caves are located 6 kms from Vijayawada. One has to cross the Prakasam Barrage towards Undavalli Centre near Tadepalli and then a deviation to Undavalli caves.

Undavalli Caves are rock-cut cave temples built around the 5th century A.D. Rock cut cave temples are usually temples carved out of rocks on mountains and hills. The structures look like caves. There is no clear record of the history of the caves. The popular belief is that these caves were built during the Vishnukundina Dynasty, another lesser known dynasty that ruled the South Central part of India including Orissa between the 5th and 6th Centuries A.D.

We reached the caves at 5.30 PM with only half an hour before closing time. There is an entrance fee of Rs.5/-

The caves are three storied and were probably built for Buddhist monks as the Vishnukundina kings were patrons of Buddhism, later somehow, Hinduism seems to have made its place in these caves.

The caves on the ground floor and first floor are devoid of any sculpture, they are empty chambers and were probably used for meditation. There are rows of pillars inside the caves, some have lotus sculpted on them, must be a symbolism of Buddhism.

The second floor is where all the action happens. Outside the caves on the second floor, there are statues of sages and lions. The statues of the lions were probably older than those of the sages or were later touched up. 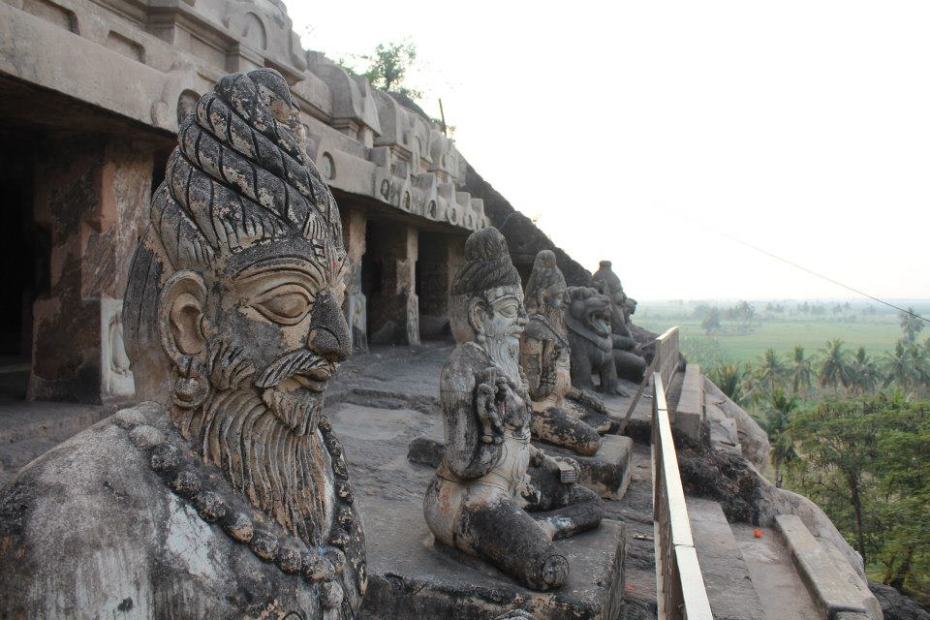 When you enter the caves, inside a dark chamber (lit by a tubelight so technically not dark), rests a 15 feet idol of Lord Anantha Padmanabha, with his entourage of deities. 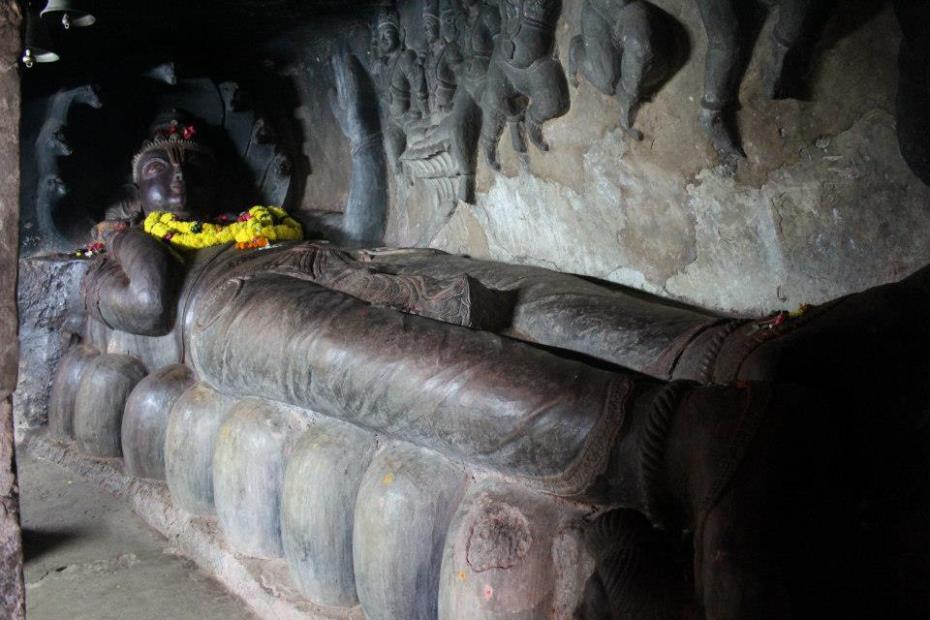 The idol looks imposing, even scary. Imagine standing this close to a huge idol of Anantha Padmanabha and the Lord suddenly decides to wake up and take you to task for intruding ! Silly imagination, but that is what an idol of this magnitude in a dark chamber does to your mind !

We climbed further to the third floor, here again the chambers are empty. Here and there around the caves, there are figures of Hindu gods. The hill on which these caves are built, overlooks the village of Undavalli and the fields. 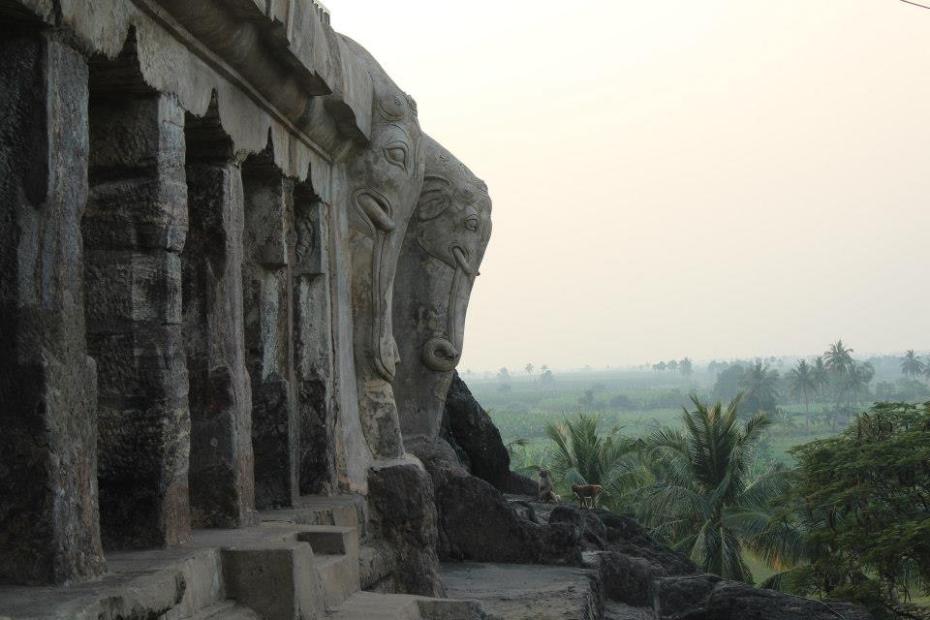 The elephant figures in the above picture, again a Buddhist symbolism. Also, if you have been to Mahabalipuram in Tamil Nadu, you will find similarities to the rock cut cave temples there. There are some more rock-cut temples called Moghalarajpuram caves within Vijayawada city itself, these are much smaller caves, more like a miniature of the Undavalli caves.

As the sun began to set, we drove back to Vijayawada and stopped at the Prakasam Barrage over the Krishna River.

The Prakasam Barrage was built to harness the River Krishna for irrigation purposes. From here we got some beautiful views of the river turning orange under the setting sun.

The Goddess of Vijayawada

From here, we headed to the most important destination of Vijayawada, the Bezawada Kanaka Durga Temple. Bezawada is the historic name of Vijayawada, that is why Indian Railways still uses “BZA” for Vijayawada station code ! The temple is located atop the Indrakeeladri Hill on the banks of the Krishna River. Indrakeeladri is associated with the Mahabharata as this is believed to be the place of Arjuna’s penance in the name of Lord Shiva for obtaining the Pasupatha Astra. It is also believed to be the place where Goddess Durga rested after killing Mahishasura. There is another legend that at the end of Kaliyuga, the River Krishna will raise upto the level of the temple and touch the nose ring of the Goddess, marking the end of the world !

The history of the temple is lost in antiquity but it seem there are records of its existence before 6th Century A.D. Today, the temple is one of the very important pilgrim centres in Andhra Pradesh.

There is a small ghat road leading upto the hill. The temple is not very crowded on normal days, during Dussera, the Navaratri festival is celebrated with much pomp. Normally, there are special darshan tickets of Rs.50/- and Rs.100/- in addition to various sevas and the free darshan. The temple is open from 4 AM to 9 PM. We had a good darshan, in all our visits to this temple so far, we always find the Goddess smiling like a little girl.

Once outside, we spent almost an hour experimenting with our camera to get a good picture of the gold covered Gopuram of the temple, shining brightly under the lights.

From the hill, there is a lovely view of the Vijayawada city and the Krishna River, some more time went into trying to capture the river in the darkness. 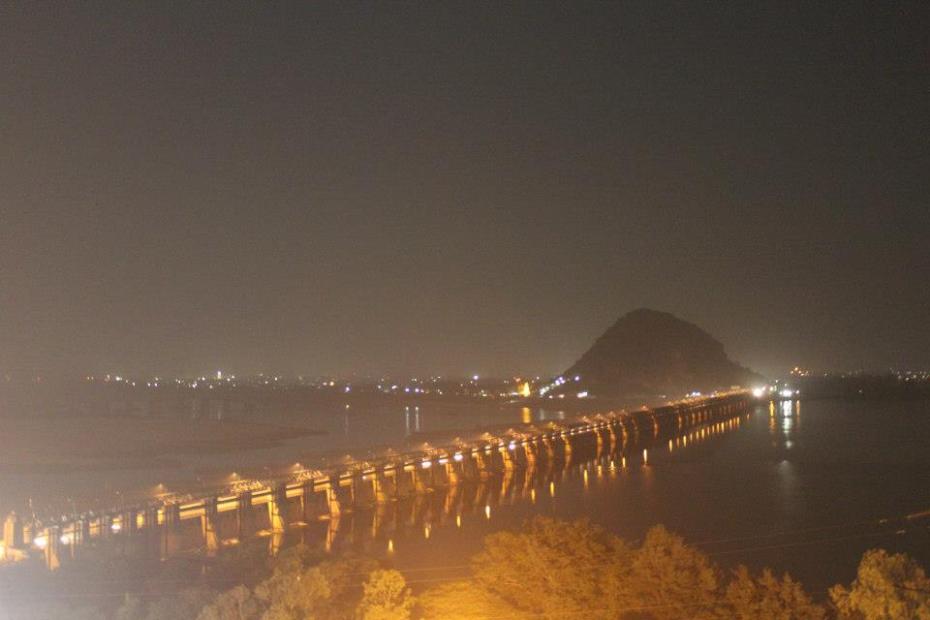 We finally left the temple, wanting to come back again the next morning to get the same view during day time.

The heavy lunch we had that morning meant that we were nowhere close to being hungry even at 9 PM, so we decided to just have a light dinner and went to a tiffin centre. Vijayawada tiffin centres are also popular for the lip smacking idlies, dosas and vadas. We ordered for a special idly which came soaked in Ghee !! That was followed by a dosa, vada and coffee, did somebody say they were not hungry?

Early next morning, we checked out of our hotel and went to the Indrakeeladri again for a sunrise view. It was foggy as usual and even at 7 AM, the sun showed no signs of coming out.

The sun was just peeking out when we finally left the place and started to Nellore. Halfway through the Prakasam Barrage, the sun decided to pose for us. The rising sun setting the river below on fire with the rail bridge seeming to form a barrier between the sky and the river – a magical scene !

Anybody who has travelled by train from the South to the North and vice versa, would have crossed this rail bridge.

Early morning walkers were going about their routine on the Prakasam Barrage and as the sun grew bolder, we caught a goods train quietly making its way through the bridge. Trains are always fascinating to watch, wonder why?

We had to tear ourselves away from these sights and drive on. 13 kms from Vijayawada towards NH5 is Mangalagiri, famous for the Narasimha Swamy Temple and also for the cotton handloom textiles. We had visited the temple earlier and no textile shops were open at 8 AM and so we drove on.

It was time for breakfast and we were closer to Guntur, so we did what any devout food lover would do. We took a detour all the way to Guntur to have breakfast at the famous Sri Sankara Vilas hotel.

This again is one of the oldest legendary hotels in Guntur. First came the idlies, then the pongals, dosas and vadas and finally the show stopper – filter coffee. The filter coffee that we were served is by far the best we’ve ever had in our lives, what aroma, what flavour, what taste !

Sri Sankara Vilas and Sri Ramayya Mess are pilgrim centres for a foodie and having had lunch and breakfast darshan at these two places, we had attained food nirvana !

Happier than ever, we took the NH5 to Nellore. 6 laning work is on but doesn’t seem to have progressed much and the quality of the road between Vijayawada and Nellore is slightly down because of it. At one of the toll plazas, when we asked the attendant when the work would be completed, he very philosophically told us “when you and I go up” !! Nevertheless, NH5 is still NH5 and in a little over 3 hours, we were home !