On Bhogi morning, we were up and ready by 7 AM, when we stepped out onto the streets, realisation dawned that we were standing in the very place that was once a centre of great power and prosperity, the capital of one the greatest kingdoms this country has known, the symbol of the Chalukyan glory – Vatapi or as it is called today – Badami !

It was a cold, foggy morning, we missed lighting the traditional Bhogi fire but the Bhogi fires in front of almost every shop on the main road of Badami, more than made up for it. On a day when people burn old things and look forward to the new, we set out to explore one of the oldest Indian kingdoms.

Before that, it was breakfast time for us and we went to the only hotel serving breakfast that early in the morning, Hotel Mahakooteshwara, a dingy, little food joint. They had only one item for breakfast – Puffed rice Poha !

Boy, it was delicious ! Absolutely no spice, light on the stomach, healthy food. This is the kind of stuff one should be eating for a healthier life but then, what is life if you don’t binge ! The tea was one of the best we ever had, obviously we didn’t stop with one cup. Though predominantly a Maharashtrian delicacy, Poha seemed to be the popular breakfast food here. This part of North Karnataka is closer to the Maharashtra-Karnataka border and there is a cultural mix.

With that, we began our tour of Badami. Badami is located in the midst of rocky red sandstone ravines, the rocks have an almond (Badam) colour and hence the name Badami. The ravines gave a natural protection to the place and the Chalukyas made it their capital, it was originally called Vatapi.

If you were a good, obedient kid who listened to grandmom’s stories, you would know the story of “Vatapi Jeernam”, the story of Asura Vatapi, who took the form of food and enticed his victims, when his victims ate the food, his brother Ilvala, would call out to him and Vatapi would take his Asura form inside the victim and kill him. This went on until Sage Agatsaya, ate Vatapi in his food avatar and before his brother could call him out, Sage Agatsya rubbed his stomach and said “Vatapi Jeernam” (Vatapi, may you be digested) and lo poor Vatapi was digested ! This story was an all-time favourite ! This post is dedicated to that grandmom who would say “Vatapi Jeernam” and lovingly rub the tummies of her grandkids, who had become immobile because they stuffed themselves with too much food !

The place where Vatapi’s story took place was named after him. There are two rocky hills jutting out of the land with a lake between them, these rocks are said to be Vatapi and his brother and the lake is called Agatsya Theertham ! The two hills and the lake is now the centre of action at Badami.

The first on the list are the Badami Cave temples. The temples are open from 6 AM to 6PM and we were there at 8 AM, the crowds were just milling in.

These rock-cut cave temples were carved out of one of the two rocky hills, the Badami fort is built on the other. These caves are over 1400 years, dating back to 6th Century A.D.

These cave temples are basically caves carved out of rocks, can you imagine carving out rocks into caves and making temples out of them !

There are 4 cave temples at Badami, each cave at a different level.

The first cave is dedicated to Lord Shiva. 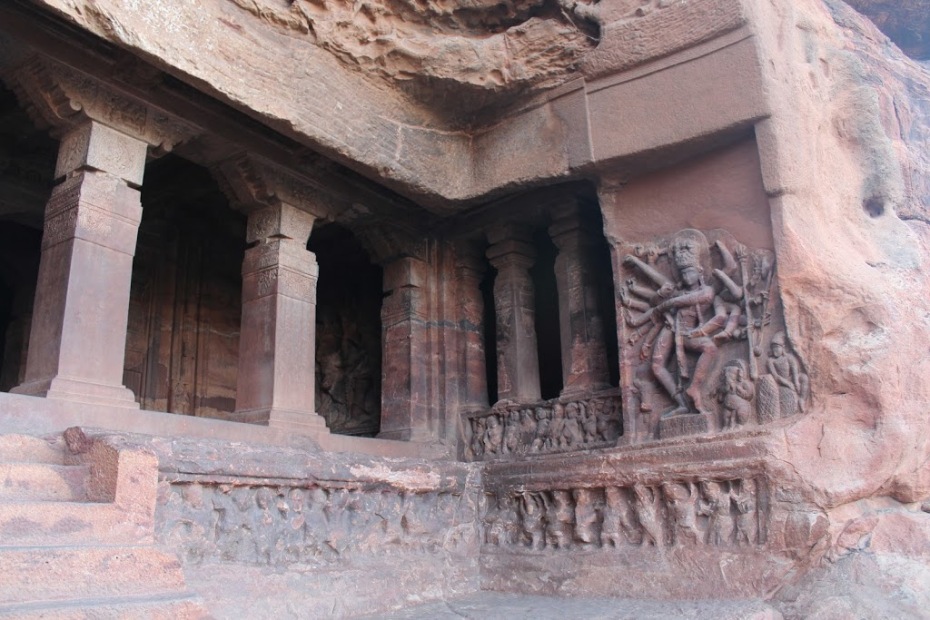 All these caves follow the same pattern, the have pillared halls leading to the sanctum sanctorum with exquisite sculpture adorning the walls and ceiling. These cave temples were probably the forerunners to so many other cave temples across the country including the Ellora Caves and the cave temples at Mahabalipuram. You will be surprised to note the similarity between all these three places and why not? The Chalukyas and the Pallavas were contemporaries who were constantly in war with each other. The Rashtrakutas, who are credited with the Ellora Caves were after the Chalukyas and must have been inspired by these temple styles.

The Chalukyas were a mighty dynasty that ruled a major part of South-Central India during the 5th-6th Century A.D. They were pioneers in art and architecture and most of the temple styles that we see in South India today began during the Chalukyan rule, even to this day, temples built in this fashion are called the “Chalukyan Style” temples.

These temples were also trendsetters in sculptural style. Near the steps of this cave temple, you will find a two-in-one figure of an ox and an elephant sculpted in such a way that the head of the elephant is also the ox’s head. Go on and count the number of other temples throughout South India where you will find the same idea !

The second cave is dedicated to Lord Vishnu and has  “larger than life” size sculpture of Vishnu in different avatars, there is a sculpture of Varaha avatar and Vamana avatar.

The fine sculpture style, perfected by the Hoyasalas, probably had its beginnings here, there are figures ranging from life size to minute ones, with intricate details. The ceilings are ornate with complex sculpture including this Matsya yantra.

How did the sculptors of yore achieve such consistency and perfection in every figure? They probably had only a hammer and a chisel !

Between Cave 2 and Cave 3, there is a natural cave from where you can get a breathtaking view of the Badami fort on the opposite hill and the Agatsya lake below.

Moving on to Cave 3, the biggest and the grandest of the caves, this one is also dedicated to Lord Vishnu.

It is interesting to note that at the time of the Chalukyan rule, there didn’t seem to be much of a divide between Shaivism and Vaishnavism, you can find Vishnu figures in Shiva temples and vice versa.

On the ceiling of the temple, you can find faded fresco paintings.

It seems the colours were made out of natural dyes that have stayed put for 1400  years !

The third cave is truly majestic with a big interior pillared hall. 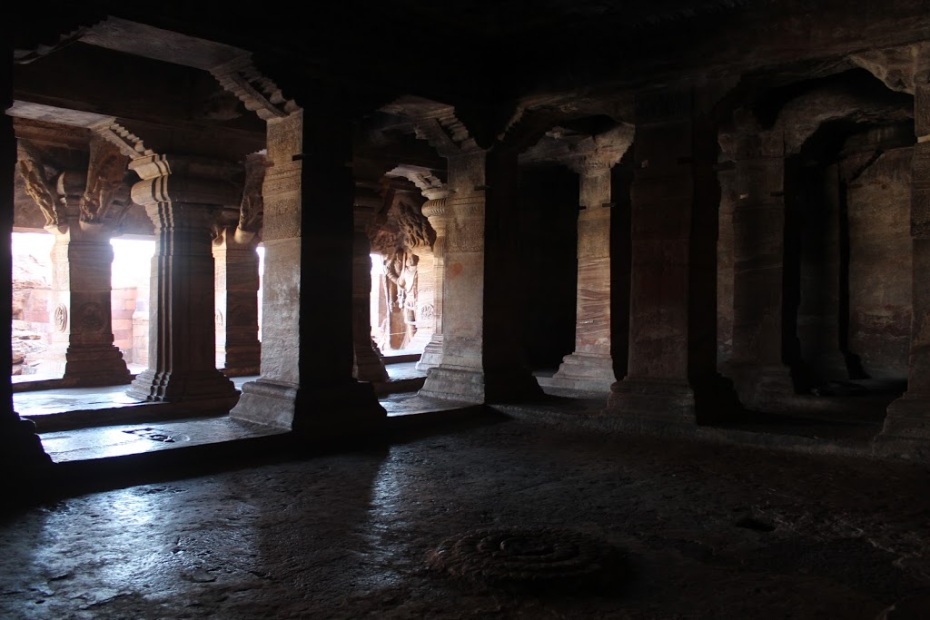 The sanctum sanctorums of all the temples are devoid of the idols, only the pedestals are left.

We climbed further up to the fourth cave, the smallest of the caves. Before that we got some more amazing views of the Badami fort and the Bhootanatha temple at the edge of the Agatsya Lake.

While Caves 1-3 are dedicated to Hindu Gods, the fourth cave is a Jain cave, dedicated to Mahavira. There are figures of Jain Trithankaras and the sanctum sanctorum houses a figure of Mahavira.

It was close to 10.30 AM and people were crowding the caves, we thought we did a good thing by visiting them early, we could visit them in peace. There was a huge group of students though, we were ahead of them throughout and had the caves to ourselves until they invaded the quiet.

One more point of caution, the caves are full of monkeys, people keep warning you about them. They do not seem to disturb you unless they find interesting things in your hand, say food, water bottles, flowers etc, we did not have any untoward incidents involving monkeys, though this writer was terrified in the beginning.

We wound up our cave temple visit and headed towards the Badami fort. One can walk the half a kilometer but beware you have to walk through stinking lanes. We walked down to the lake, its water is green with moss and people don’t seem to have any hesitation in using the lake for washing clothes ! One more heritage structure fallen to growing civilisation.

We sat on the steps on the bank, taking in the sights of Badami and refreshing oursevles in the cool lake breeze, a quick break before our next schedule.