Badami-Pattadakal-Aihole, that is how this tourist circuit in Karnataka is always referred as. So Badami becomes the most important place, followed by Pattadakal, the World Heritage Site and then Aihole joins the group because it is located nearby. Almost all websites, books, information centers highlight Badami and Pattadakal. People usually plan the trip dedicating maximum time to Badami and Pattadakal and if time permits they make a trip to Aihole.

Like all good tourists, we followed the same sequence and landed at Aihole on Sankranthi morning after the Poha breakfast at Badami for the last time before leaving the almond coloured landscape. As far as we knew from the research on the internet, we would need around 2 hours for Aihole and then our idea was to drive back to Hyderabad as Aihole is located enroute Hyderabad from Badami.

Aihole, the first capital of the Chalukyas is a 45 minute drive from Badami, one passes Pattadakal on the way. When we refer to Badami-Pattadakal-Aihole, it probably refers to the order of their location. The drive is through the pretty looking country side, it was 7 AM when we started for Aihole and the fog had not yet cleared, in some places we could see the layers of fog suspended in the middle of the road like a white sheet. Green fields, white fog, early morning breeze, country roads – we will leave the rest to your imagination !

We reached Aihole by 8 AM. We were surprised that for a place of such tourist importance, Aihole is actually a tiny, remote village. As we parked our car near a temple at the village entrance, we saw oxen being brought out of a small house, people actually tied their oxen inside houses ! Actually, it is not very surprising because we know of pampered little calves in villages that walk inside homes and demand to be fed their favourite food !! The first of the surprises Aihole threw at us.

The first temple we walked into was the Huchchapayana Math, if you are travelling from Badami, you will come across this temple complex first.

There are two small temples in this complex. It was very early in the morning and there was nobody else apart from us. We opened the door and walked into the dark interiors of the sanctum sanctorum, it was a Shiva temple. The ceiling was heavily adorned with sculpture depicting the Trimurthy (Trinity of Brahma, Vishnu and Shiva). Like all Vishnu’s of Chalukyan temples, here too Lord Vishnu is in a seated pose.

Up next or in the center is Lord Shiva seated on the Nandi surrounded by his entourage.

Close to the Garba Griha is Lord Brahma on his Hamsa (Swan) Vahana, nowhere can you find such a depiction of Brahma.

Together the three of them symbolize the universe or the meaning of God – generation, organization, destruction !

A short walk from the Huchchapayna Math is the Kontigudi complex, a group of 4 small temples built during the 7th Century A.D. To reach these temples, we had to walk through garbage dump yards and open drains where pigs were busy with their breakfast ! It was a huge shock for us, it is hard to imagine that this is being allowed near monuments of such importance.

If you manage to close your eyes and nose for 2 minutes, the Kontigudi temples will make you forget all that. 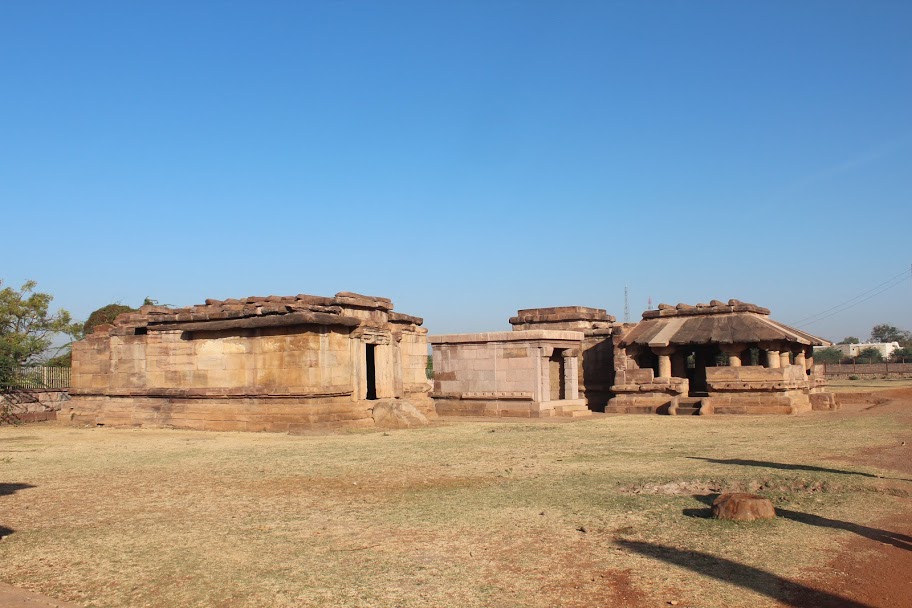 We just cannot begin to tell you how “cute” these temples are. Almost all the temples are dedicated to Lord Shiva. This one was the cutest of the lot, it looked like a toy temple.

Each of the four temples is built in a different style. Check out this one in the Dravidian style and another one in the Jain temple style. 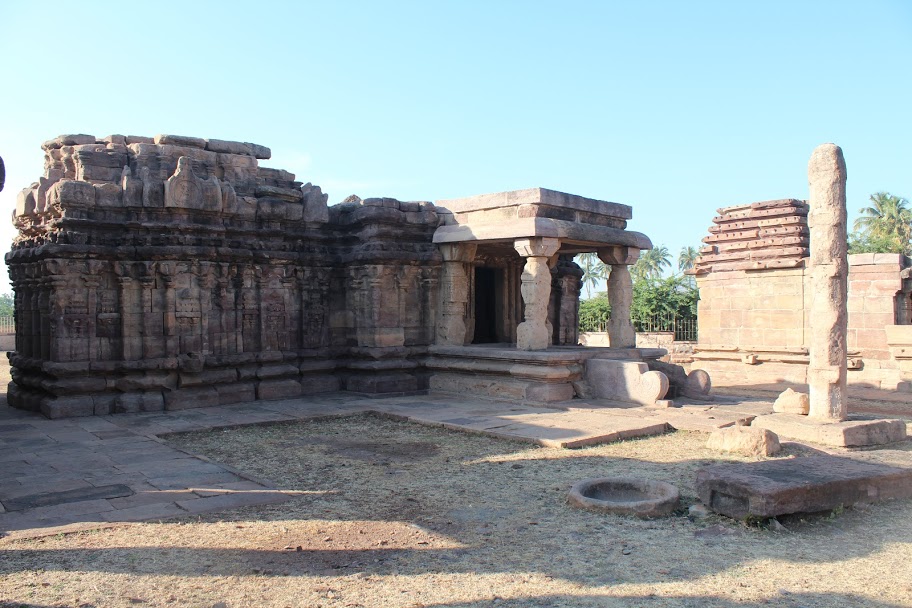 The temple complex also has a tank with this beautifully sculpted thorana. 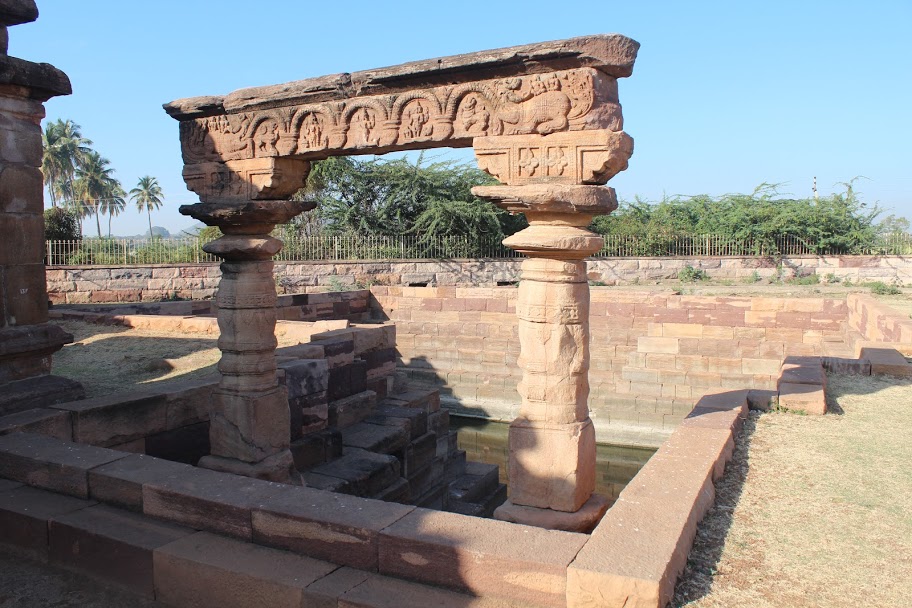 A little distance by walk from the Kontigudi is the Rachi Gudi, a 11th Century temple. The sloping roof style is something unique to the temples in Aihole. 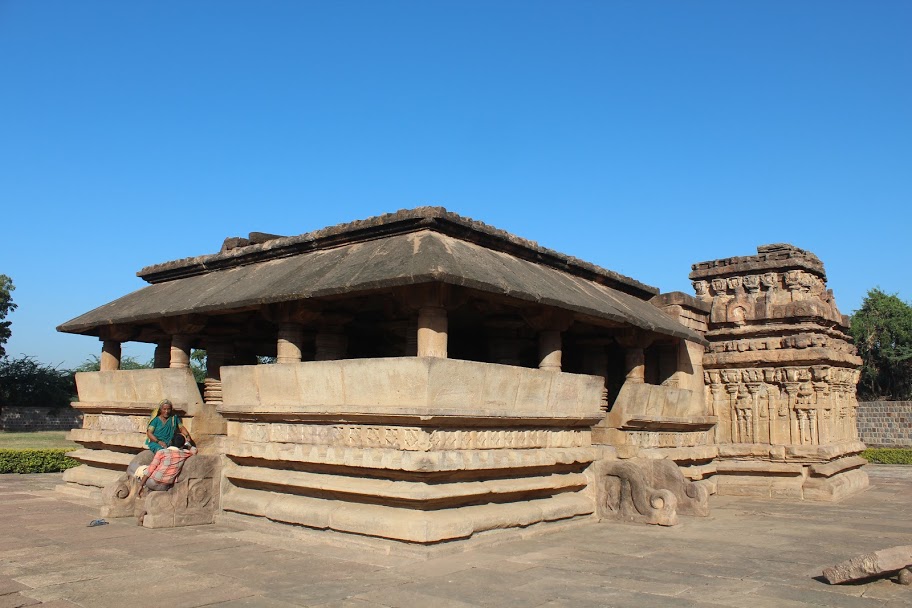 This old lady is the caretaker of the temple and showed us around, we paid her Rs.20 for her “guide” services.

When you search for Aihole, the internet shows you mostly the famous Durga Temple and mentions other temples in the area, with brief descriptions. You would think Aihole would take only a few hours, like what we thought. Only when you visit Aihole, you will know, that every corner in Aihole has temples, all you can see around you are temples. It seems there are close to 120 temples within that small village !

We had absolutely no clue that Aihole had so much to see and know, we did not even bother to charge the camera thinking it was only a matter of few temples. As it turned out, our camera hit the danger signal even before we finished visiting the Huchachapayana Math and we panicked when we realised we had a village full of temples to see ! Aihole threw a googly that had us clean bowled !

Deciding on a plan for optimum utilization of the remaining battery, we moved on.

Charanthimatha group and other temples

By then, our heads were almost spinning trying to keep track of the temples we were visiting. Our limited battery reserve meant we couldn’t click pictures of every information board. Very close to the Konti Gudi complex, there are other temples called Charanthimatha temples, Jyotirlinga group of temples, Maddinagudi and so on. Some of them are Jain temples but with sculptures of Hindu Gods. They were built during various phases of the Chalukyan era and there is an intermix between Jain and Hindu images.

This particular temple stood out for us, it had a beautiful thorana connecting two shrines.

Behind one of the shrines there is a stone ladder leading up to probably a smaller chamber.

These temples make you wonder what were the Chalukyas thinking when they built them ! Just imagine, building temples in every nook and corner, each temple with unique, creative styles, you can only bow down to the genius !

How to spoil heritage?

This is one lesson we, Indians, can teach the world. Our people are experts in vandalising heritage monuments, defacing them with graffiti and encroaching upon heritage sites. Aihole is the shining example of all these. Every inch of the heritage site of Aihole has been encroached. We were shocked out of our wits to open drains, filth, pigs, settlements, cattle, ferocious dogs charge at you as if the temples are their property. In the middle of all this, these historically sacred temples stand helpless ! Sad ! Karnataka Tourism is trying to obtain World Heritage status for Aihole, it deserves it more than any other place, it could even give Hampi a run for its money but the state in which it stands today, there is still a long way to go before Aihole gets the respect it deserves.

It was very difficult to find angles for photos without encroachments peeping into the picture, especially with dogs demanding that you leave the place immediately ! Here are a couple of pictures to give you an idea of the encroachments.

The Tryambakeshwara group of temples are located just adjacent to this group of houses. 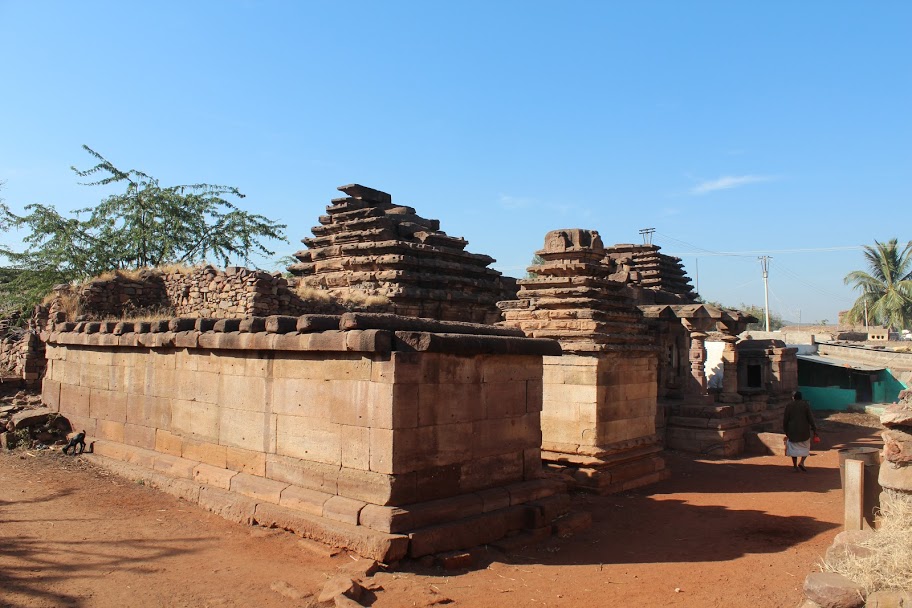 The other part of the temple group is a make shift cowshed ! 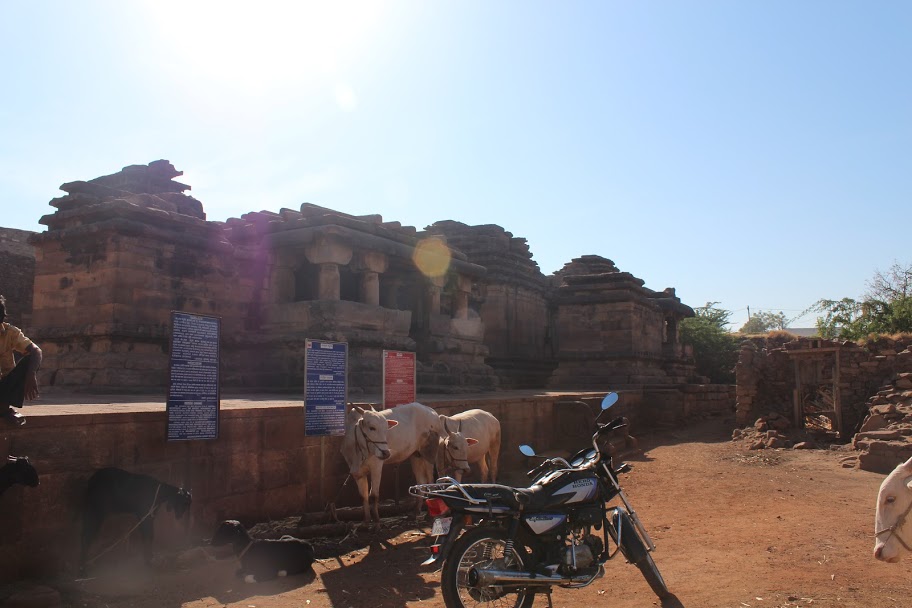 It is ironical that the oxen and goats stand right next to the board which declares the temples as “Protected Monuments”. As the dogs chased us out and the oxen looked ready to charge, we consoled ourselves that they were probably the temple guards and were “protecting” the monuments !

When we checked the time, it hit us that we had spent more than an hour and had only covered one part of Aihole, there was still the Aihole fort, the famous Durga temple complex and numerous other temples ! The very thought was tiring as the sun grew stronger but we were determined to explore Aihole to its ends and took out the car towards Aihole fort. The dogs continued to bark and chase our car !

As with other places in this circuit, it is advisable to take your own vehicle or hire a cab.

There are too many temple groups in Aihole, you could park your vehicle and walk to the groups close by.

This side of Aihole does not have any shops, advisable to carry enough water.

Beware of dogs and pigs, don’t run. Just remember the adage “when elephants walk, dogs bark” ! The pigs are harmless though, they are too busy eating like themselves !!