That was the scene at sunrise at Kolluru.

When your day begins like this, you would not find a reason to complain about your day !

When we woke up, the rest of the resort was just stirring up. We took the early risers’ advantage and freshened up before the washrooms could get in demand.

From our vantage point, it was a most calming, peaceful sight ! We watched the cloud-kissed hills and savoured the fresh morning breeze.

Slowly, people began to wake up and from up the mound, the resort looked like a pre-historic settlement. Tents, huts, river banks, hills, people ambling about ! A stay at Kolluru is like a travel back in time.

The moon seemed to have a good time too, not wanting to leave even at 6.30 AM !

A not-so great but refreshing cup of coffee later, we walked along the river bank. The sun had not made an appearance yet. It was pleasant, except for the stray dog that seemed to enjoy our company and followed us wherever we went !

Nature and philosophy go together

For the nth time, we cannot find the right words to describe how breathtaking the sights around were, we will leave the burden on the pictures, which we are sure are as incapable as us !

The setting was perfect to just sit and take some time off for yourself, places like these seem to get you face to face with your inner feelings, which is good because instead of finding an escape route, in places like these you would want to sit and think about the real purpose of your life and funnily enough, such places seem to tell you that life has just one purpose – to be alive !

In the midst of such very “profound” thoughts, the sun began to light up a patch of the hill, while still hiding behind the clouds.

We walked further and climbed a few rocks on the banks, this time just to feel the silence, around us, within us which made us realise that we are but a part of this nature, what lay around us, was within us too !

By then, the dog seemed to have enough of the philosophy and became restless, actually, it finally seemed to dawn on it that we were not going to him anything for breakfast ! As in cue, there was an announcement on the public address system informing us that breakfast was ready. For all our philosophical thoughts and ideas, nothing makes us more happy than the thought of food !

Breakfast was served outside the owner’s cottage. While we feasted, we could see the other side of life at Kolluru. Women carrying pots of water all the way from the river, up to the village, the walk in the sand is tough and it is a wonder how the women manage it with heavy pots on their heads. 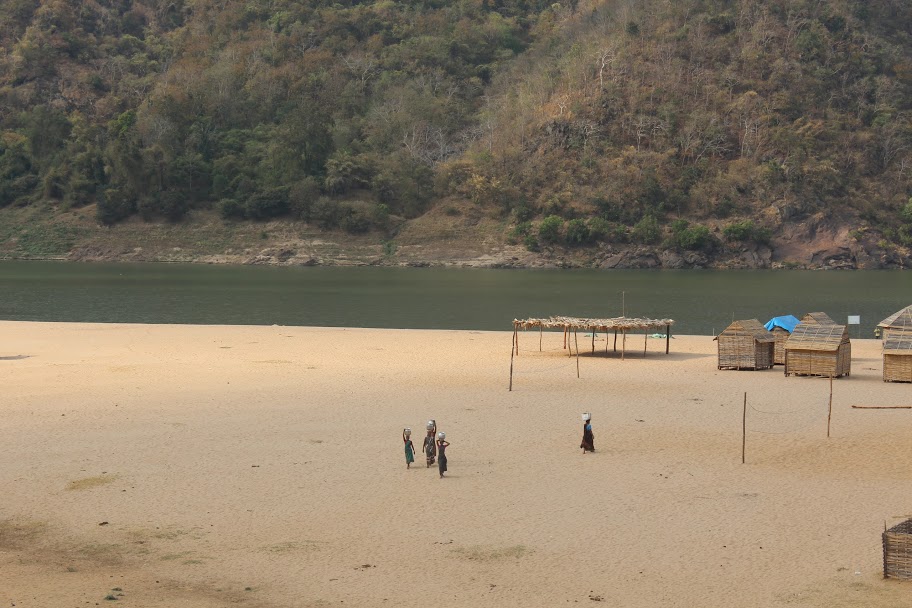 The matter of fact approach that these people have towards their struggles, the dignity in their humble living are lessons we learn when visiting places like these.

Breakfast done, we went in search of our guide, Kishore who would accompany us to the Pamuleru, a small stream of Godavari, flowing deep inside the woods. Soon, we were walking through Kolluru village on our way to Pamuleru.

Kolluru has a primary school for tribal children, a most welcome development. 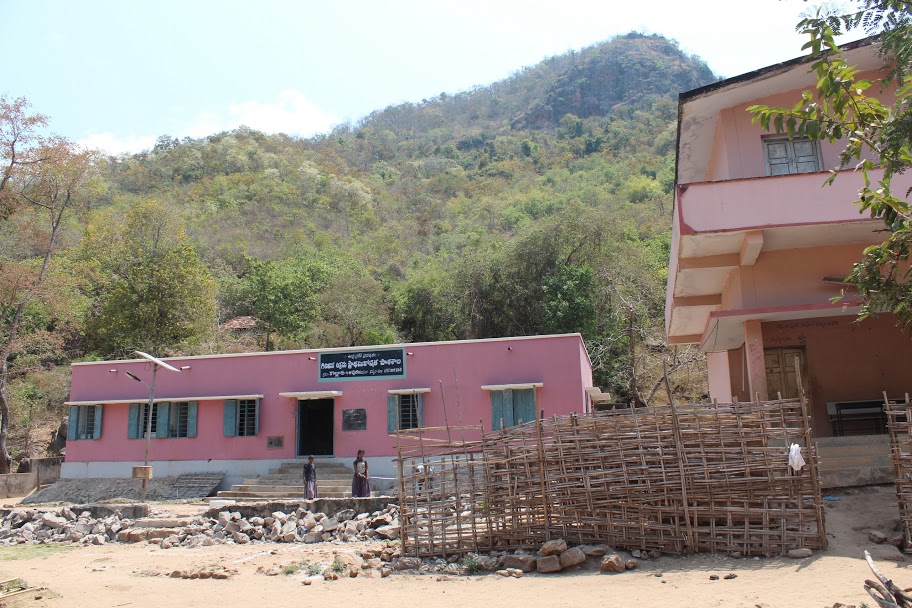 Further up, we caught up with a few villagers who told us about their daily life. It seems, there are no hospitals in Kolluru, the sick have to be taken on the boats to nearby villages where they can find doctors. They had their share of extreme hardships but the bountiful nature never leaves their side.

There were pretty sights everywhere, red chillies put out to dry,

a riot of colours – the blues, whites, oranges, greens, browns ! What can you say when nature decides to out to herself, every single time ! 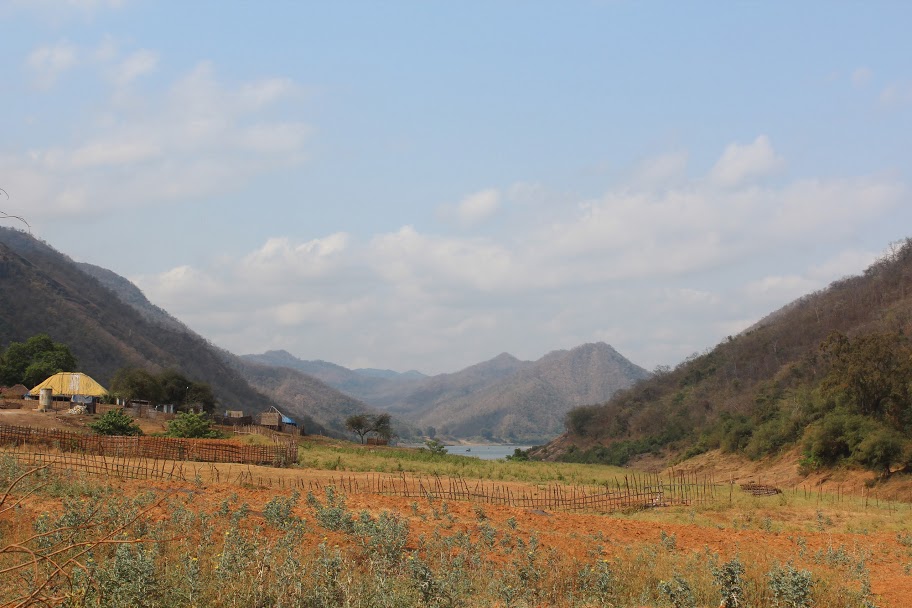 The village gives way to thick woods as you near the stream.

It takes about 20 minutes to walk from the village to the stream. Pamuleru is your quintessential mountain stream, that is the best we can tell you about it. It is time we enroll ourselves for an English course to hone our adjectives’s skills ! Forget us, look at this beauty !

There we were, for the next 2 hours, the only things that existed were the hills, the rock strewn bank and the stream ! 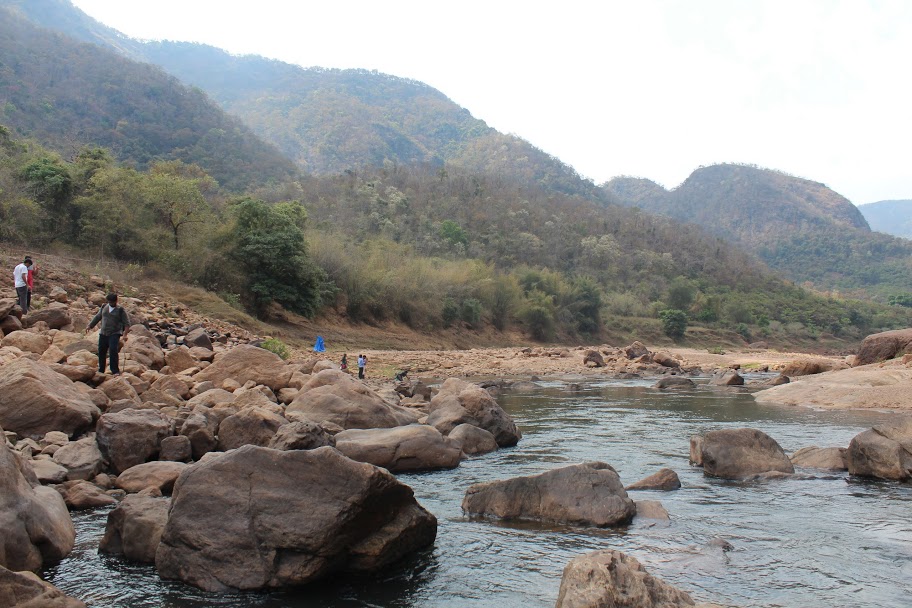 The sound of gushing water is the best music you can ever hear, water excites people, young and old like nothing else can, what is this bond that we share with water?

All around, people seemed to be having a whale of a time as they swam, splashed, lay down, bathed, played in the water, some like this writer were happy to click pictures of the joy on people’s faces. Though we couldn’t have enough of it, ever, it was soon 11 o’ clock and time to leave. It was getting hot by the moment too and by the time we walked back to the village, we were drained of our energies !

As we reached the owner’s cottage, a massive fish was waiting to be cooked.

It meant, lunch time was round the corner.

We walked down to our tents, interrupted by this writer’s nasty fall on the way down, tense moments followed when the camera cover refused to open because of the fall but thankfully all was well when the episode ended well !

The sun snarled at us as we showered in the open roofed bathrooms, our bare feet burned on the bathroom floor but the cool water and breeze made up for everything. The most enjoyable shower we had in a long time !

Lunch was done by 1 PM and the heat had reached its peak, it was horribly hot and humid and we had very heavy stomachs, need we say more? We were too scared to even think about going near the tents, who would want to turn into a stuffed, roasted piece of human??

Kishore, the wise man, advised to wait near one of the cottages on the mound till our launch boats arrived, they were expected between 2 PM – 3 PM, we had another hour and it was spent listening to Kishore’s wise cracks and sombre sermon about life in general, politics, weather and everything under the sun, the sun was happy and shone his choicest, hottest blessings on us !

Around 2 PM, an announcement was made asking everybody to pack up as it was time for the boats to arrive. When we started this trip, we had doubts if we would get bored at Kolluru, considering that there was nothing to do other than laze around. As it turns out, we had no clue where the last 24 hours had disappeared !