Srisailam for the nth time – I – The evergreen drive !

In the last 12 years since Hyderabad became home, trips to Srisailam have figured 7 times ! There was time when we visited the place 4 years in a row. And, why not? Srisailam is a holy, pilgrim place, ancient temples, scenic beauty, a mighty river, waterfalls, dense forests, wildlife, treks, dam and a great drive – what more can a travel enthusiast ask for?

We never miss a chance to drive to Srisailam. The 3rd weekend of June saw us heading to Srisailam, while we drove from Hyderabad, our family joined us from Nellore, via the Markapur-Dornala route.

Stopped in our tracks !

Our journey began at 6.45 AM, we took the old city route via Chaderghat instead of our favourite ORR to catch up with our abroad bound cousin. We lost our way a couple of times and wasted around 45 minutes but no complaints because we got to drive past the Falaknuma Palace. When we finally hit the Srisailam highway it was 8 AM.

This highway seems to be getting better with ever trip, it was a super smooth drive upto Kalwakurthy where we stopped for breakfast at 9 AM at a roadside hotel and feasted on hot puris and spicy dosa.

Half an hour later, we were stopped in our tracks in a village near Amangal ! There was a Telengana Bandh that day and some TRS activists blocked the highway stopping the traffic on either side. If we had reached the place 2 minutes earlier, we could have escaped but we reached the village just when they were stopping vehicles !

The activists squatted on the highway shouting slogans.

We were stuck on the road with no other way to go. The policeman who stood guard at the place told us that they were waiting for a local reporter to come and take pictures and then they would clear the place !

With nothing else to do, people got down from their vehicles and took pictures of the protests, some were found fooling around and having fun.

The party flags were in great demand as people wanted them as souvenirs, one of the activists was telling us they were running short of the flags !

After about 45 minutes, the reports seemed to have arrived, the shouts grew louder and an effigy was burnt. Everybody wanted to take pictures and the activists were kind enough to give us some space to take pictures !

Shortly after, the road was cleared. Further ahead, there was another blockade but this time people had enough of the drama and took another route through the town bypassing the rasta roko ! One wonders what do these political parties achieve by these stunts? Blocking roads and troubling ordinary citizens on whose behalf they claim to fight.

Welcome to the jungle !

While driving from Hyderabad, you pass by Dindi reservoir. One can stop here for a while, climb down to the reservoir and enjoy the breeze.

An hour’s drive from Dindi will lead you to the entrance of Srisailam Ghat Road. Everytime we visit this place, we make it a point to stop and click a picture of the the straight road merging into the mountain and encircling it. In fact, as we near the Nallamala Hill range, our excitement picks up in anticipation of this road. 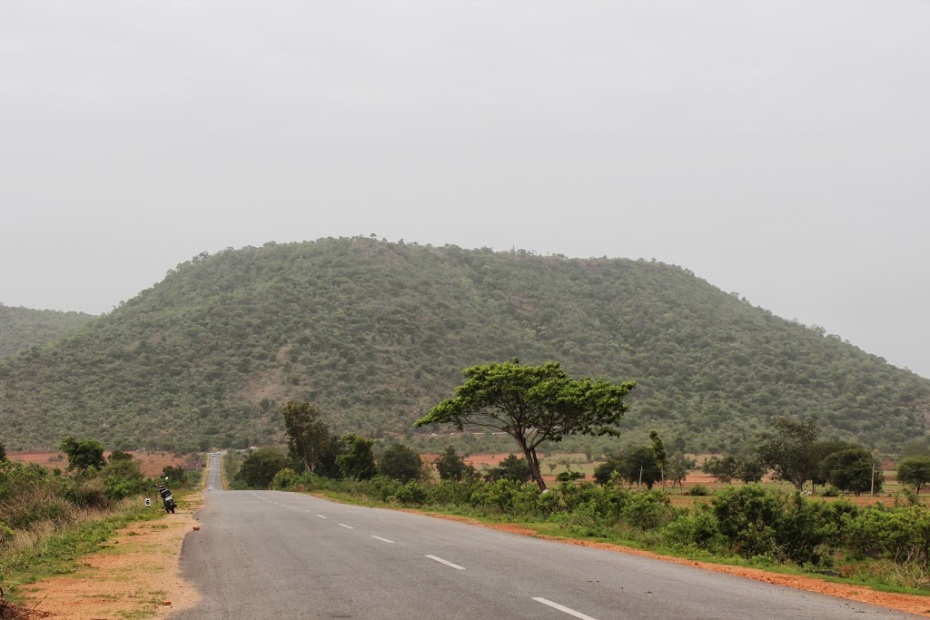 A short drive later, you arrive at the Mannanur Checkpost, the official entry point to the Srisailam Reserve Forest. 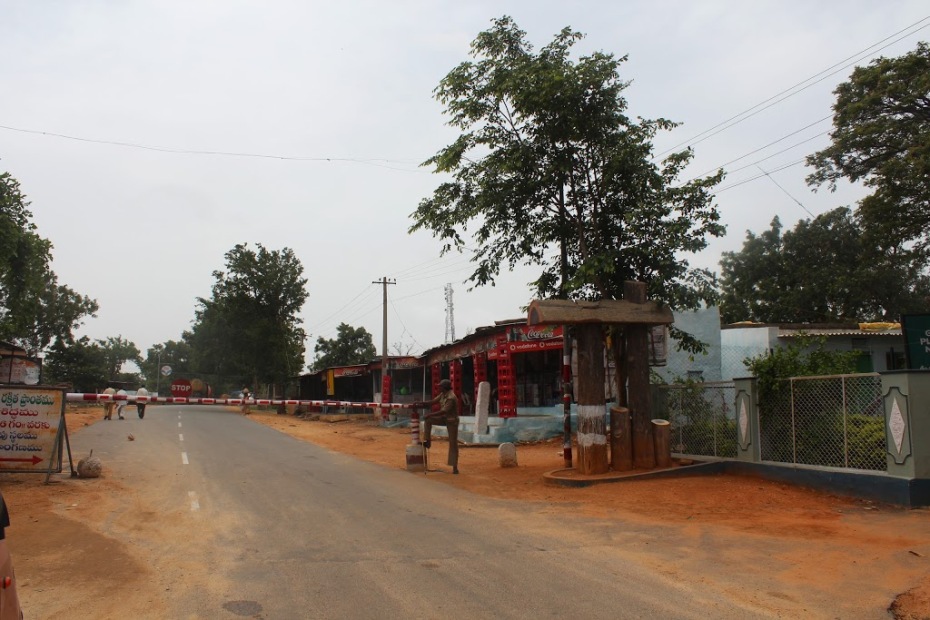 One has to enter their name and car number in the checkpost records. Also, entry into the Srisailam Ghat is not permitted between 9 PM and 6 AM. Make sure you plan your arrival timing accordingly.

Mannanur Checkpost is usually a pitstop before heading to Srisailam. You can find dhabas, eating joints, clean restrooms and dormitories. We stopped for a cup of tea even as monkeys ran here and there and on rooftops, thanks to them, we could not relish our tea in peace !

A short drive from here brings you to the entry point of Eco-tourism Safari and Farahabad View Point, a huge tiger statue greets you at the entrance. The safari is open from 7 AM to 4 PM and lasts about 1 hour 30 mins. Private vehicles are not allowed and one has to take the jeep safari, they charge Rs.800 per trip and a minimum of 6 people per jeep is a must. So, if your group is less than 6, you will have to wait till the jeep is full.

The safari is supposed to be a tiger safari but we were told spotting tigers was very rare but spotting birds and other animals like Sambar Deer, bears etc was common. The Farahabad viewpoint promises a breathtaking view of the Nallamala Hills and a lake nestled in between.

We gave it a miss because there were only two of us and since it was close to noon time, chances of spotting a tiger would be impossible.

A short distance from here is Mallelatheertham waterfall, we had visited this waterfall in our earlier trips.

The beauty of the drive to Srisailam actually begins from here as you drive deeper into the forest. The road is mind-blowing, with greenery everywhere, the weather was lovely too. The recent rains seemed to have made the forest very happy as it had an extra glow of green ! 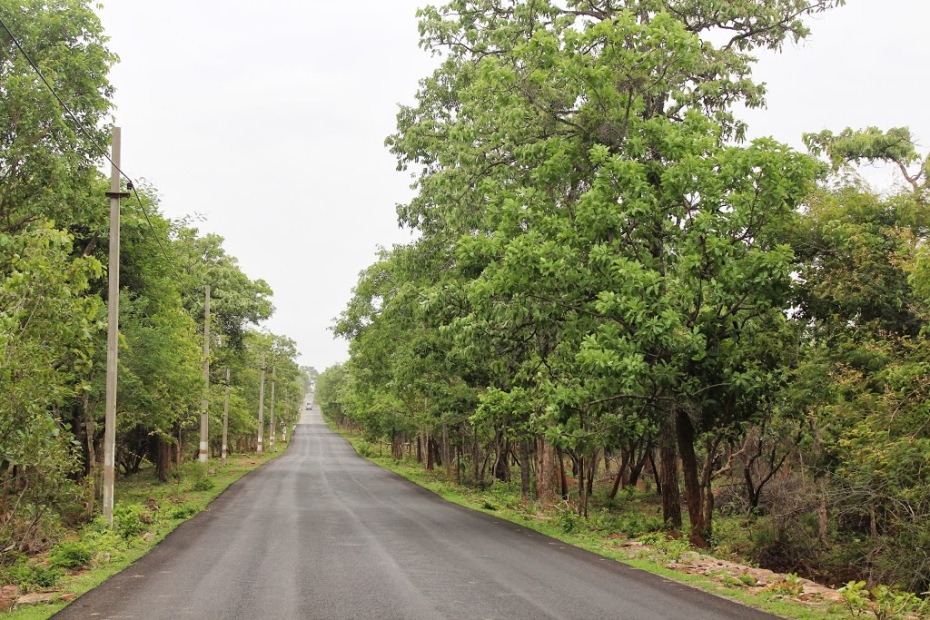 If you drive here after dark, you might spot an animal or two, during daytime you can only see monkeys. You will find ant hills wherever you look and are mostly likely to mistake it for some animal !

Though the road is excellent, we suggest you slow down, switch off the AC, roll down the windows and breathe in the fresh air and feel the peace within ! We just love this drive, remains ever green and we mean that literally.

Enroute, there is another viewpoint called the “Octopus Viewpoint”, it looked like you had to trek a little further, since it was only the two of us, we did not venture there.

Srisailam is home to the Chenchu Tribe, you will find tribal villages dotting the route. Some of them have even taken to farming, you can see open farmlands along the road.

As you near Srisailam, out of the blue, just after a turning the Krishna River arrests your attention from this viewpoint !

The Srisailam town can also been seen at a distance. The Nallamala hills never looked this green, it was a cloudy and hazy day but the greenery could not be missed. All our previous trips had been either in winter or summer, this monsoon look of Srisailam was fabulous!

Next to make an appearance is the imposing Srisailam Dam. As the ghat road winds closer to the dam, one can get a very close view of it. The Hydroelectric power station can also be seen from here. It seems the power station goes 7 storeys underground.

In earlier times, the traffic used to pass over the dam, now a bridge has been built to protect the dam. The bridge runs exactly opposite the dam, stop for a while to take some pictures of the dam and the river. In this case, we could only see the dry river bed of the Krishna, the rains were yet to bring heavy inflows. 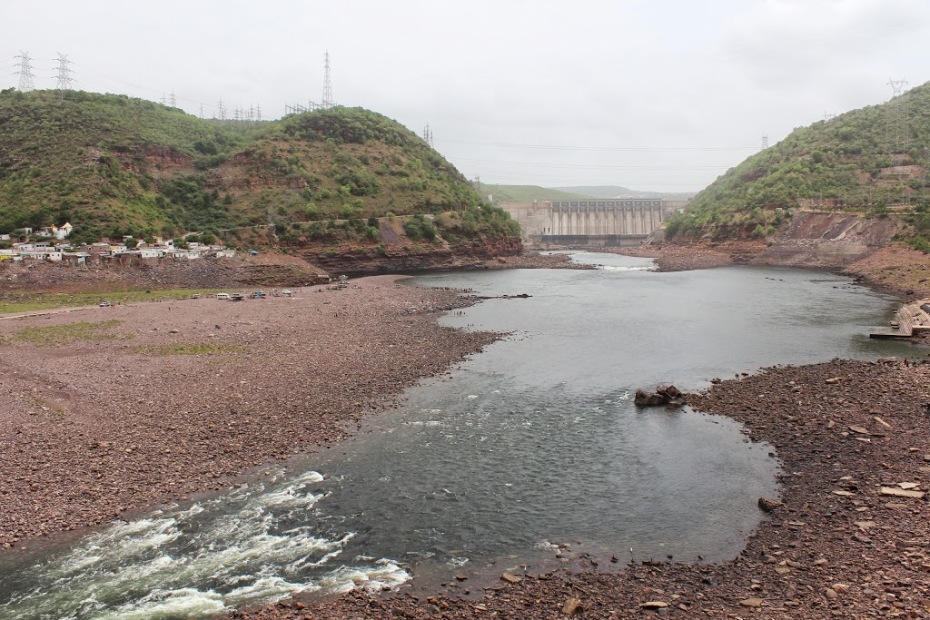 Just after you cross the bridge, there is a small, dirty track leading all the way down to the river. If you have an all terrain vehicle or your car can survive a steep, rocky, bumpy, mud path, you could drive down. This is not recommended when the river is in flow.

Further up, there are steps leading to Pathala Ganga, as the Krishna is known here, stop here for a holy dip in the river but the road is too narrow to park your vehicles.

There are two other viewpoints that give you a lovely view from above the dam. Do stop by and enjoy the view alongwith some ice cream or a snack.

The Srisailam Dam can be seen only while driving from Hyderabad or on the Hyderabad-Srisailam route, those coming to Srisailam from the Dornala side cannot get a view of the dam.

The Ghat winds up from the dam and as you leave it behind, you enter the realms of the holy town of Srisailam.

– There are no petrol filling stations or air filling/tyre replacement bunks on the ghat, make sure your vehicle is in good condition !

22 thoughts on “Srisailam for the nth time – I – The evergreen drive !”