Weekends are what life is all about, what you do on weekdays is just to sustain that life ! Weekends are, thus, the most important days of our lives and you would want to make the best out of them. With that profound “gyaan”, during the weekend of 21st September, we planned a trek to Khajaguda hills in Hyderabad.

The city with its Deccan Plateau roots, is a paradise for adventure seekers, rock climbers, trekkers and Khajaguda hills located in the Khajaguda village, close to the IT hub of the city, is one of the popular trekking and rock climbing spots. The place is just a stone’s throw from where we live. Everyday, while driving to work through the ORR, we pass by these hills and boulders, those sights play a big role in motivating us to get to work !

On that Saturday morning, we set out for the trek, not having slept a wink the previous night because, oh, why else? We were having a Friday night out at home. It was raining early in the morning, thankfully, it cleared up soon. We drove upto Khajaguda village, parked our cars on the road and began our trek around 7 AM. The initial 10 minutes walk is through the village, the path leads you to the hills. There is not standard starting point to the trek, you could stop anywhere near the hills, even on the ORR service road and begin your trek.

The trek to the top is relatively easy too. There is no fixed path for the trek, you just walk about as you please. A little up the hill, we were greeted by Hyderabad’s trademark boulders.

As we climbed up, we spotted people already up there and practicing rock climbing. It was amazing to watch people climb rocks without any equipment, just holding on to the gaps and cracks in the rocks and climbing up like a human lizard ! Makes you wonder if much before man became what he is, did he have reptile instincts?? We of course, had no such talents and stuck to our trek.

There seemed to be some road laying work going on here, we followed a tractor track and arrived at a cave like opening where Avatar Meher Baba, a godman, had meditated for sometime. There was a fencing around the cave, so we didn’t try to go near it. 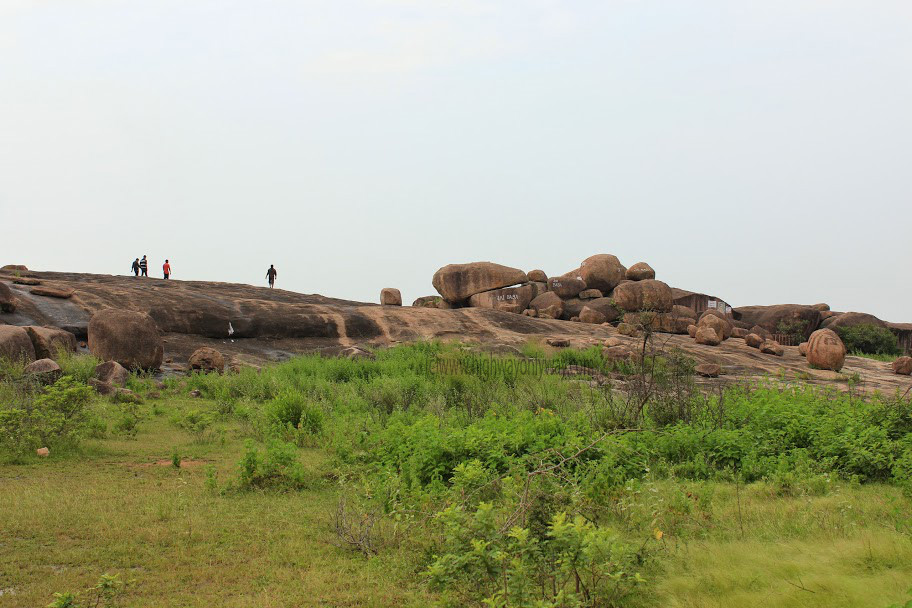 The hill slopes were green thanks to the recent rains. From here, you can get a lovely view of the city skyline. 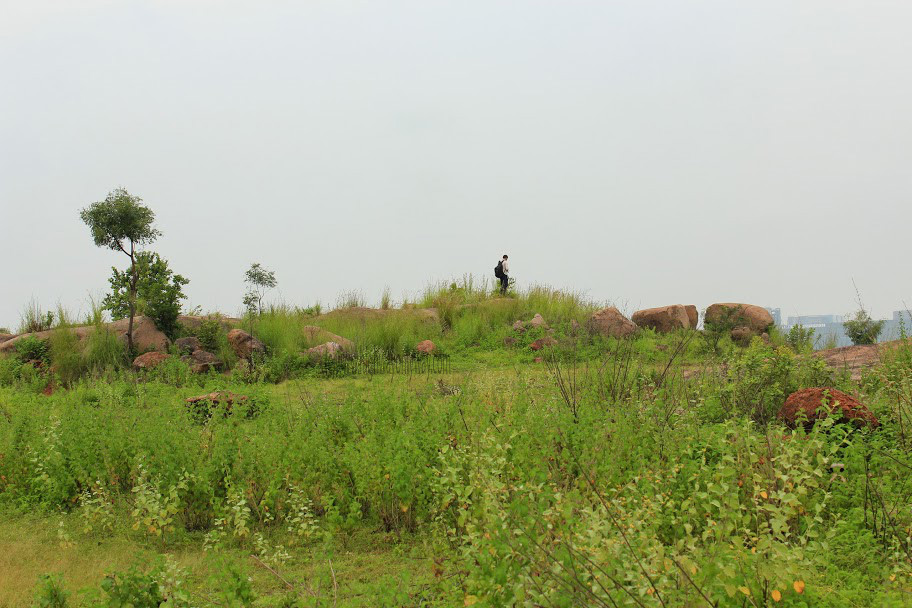 The fresh air, the silence broken only by the call of the peacocks, rocks and greenery all around- you would forget you were in a city if not for the IT companies’ buildings stretching before you. It felt like a dream world meeting your real world !

The trek re-energized us, none of us seemed to remember that we hadn’t slept the whole night ! We walked further up and reached the other end of the slope. In the distance, perched on the rocks, we found a couple of peacocks, gazing out at the city, probably enjoying their early morning chat.

By the time we could click pictures, one of them flew away, they did not give us the time to switch to a bigger camera lens. So, now spot the peacock in the picture !

Every species on earth seems to have a fascination for scenic views !

The grand old rocks of the world !

After some more walking along the slopes, we reached a spot where the rocks had been piled up like a “rock burger” ! 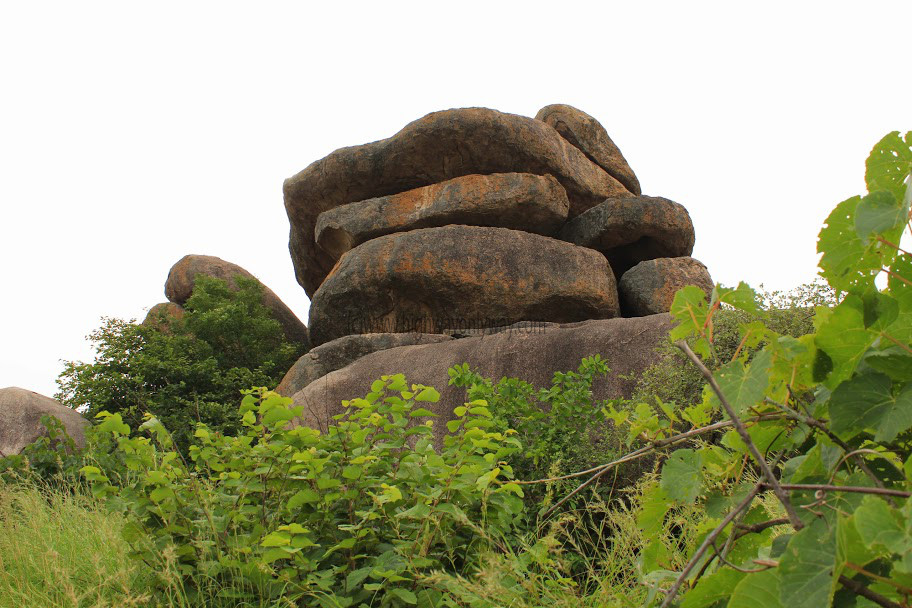 Hyderabad is blessed with these natural rock formations, the city landscape is strewn with such rocks, even in middle of the most busy centers of the city, you would find a few rocks and boulders ! The internet says, these rocks are mostly grey granite and estimated to be around 2500 million years old, formed around the time the earth’s crust cooled down ! This makes the rocks of Hyderabad one of the oldest geological formations in the world !

Sadly, these oldest inhabitants of the earth are being driven out today. As the city expands, these rocks are bearing the brunt of it, they are simply blasted off to make way for modern roads, buildings and homes ! The rate at which they are disappearing, the heritage rocks would soon be a thing of the past. There are few organizations, though, that are trying to increase awareness about these precious rocks.

When you look at these huge boulders, you wonder how they hold up ! It looks like a small push and they would all come tumbling down and yet they haven’t moved in millions and millions of years !

They’ve stood like this since the Earth evolved, may be they even offered shelter to the early forms of life and to early humans through their caves and crevices. 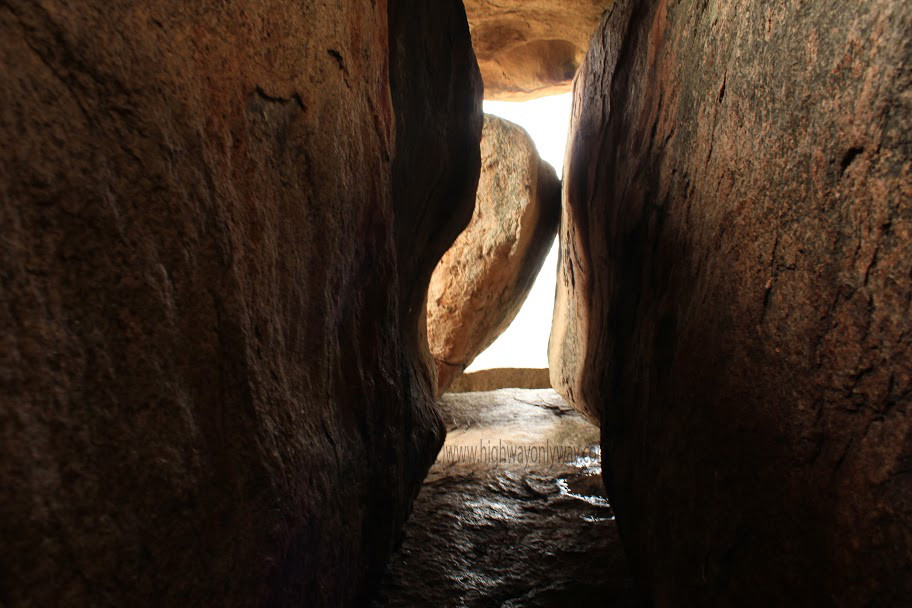 While here, the guys wanted to try a hand at rock climbing. There was another group with their instructor, who taught our guys some techniques of rock climbing like the “Chimney Rock climbing”. The less adventurous of us were happy walking in and out of the cave like structures and clicking pictures of the others !

From where we stood, we could see the city suburbs, green fields and the ORR in the hazy distance.

To our left, we could see the Golconda Fort and the Qutub Shahi Tombs, all blurry due to the fog. 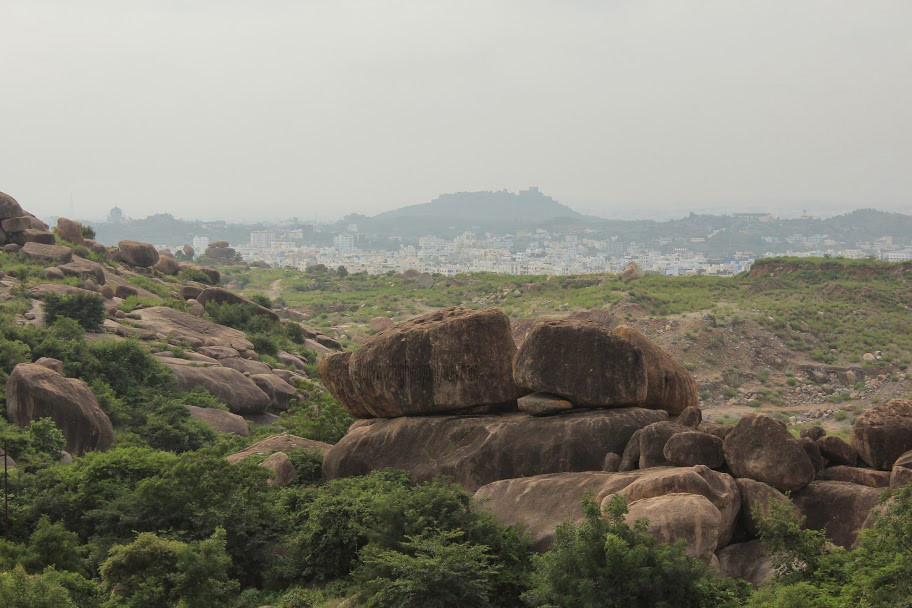 It was 9.30 AM and hunger had set in and we decided to head back. While trekking back, we found a few wild custard apple trees and plucked lots of fruits. God knows how these trees survive in the rocky terrain !

The fruits were not ready for immediate consumption, we tried ripening them at home later with disastrous results ! Lesson learnt – leave nature to itself !

On our way back, when we reached the Meher Baba cave area, there was a digger machine busy with the road laying work, the driver obliged one of our guys with a ride on the digger’s bucket. The workers there told us the road they were building would lead to a very old temple dedicated to Lord Anantha Padmanabha, located below one of the slopes. They asked us to trek down and visit the temple.

The trek down was a little steep and we had to pass sideways through a narrow opening between two rocks. There, at the end of the slope in a small clearing, was a very ancient looking temple.

It looked like those temples described in archeological thriller novels ! Nobody knows its history. Who would have thought of building a temple deep down a hill slope surrounded by boulders? Does the temple carry any secrets?

The image of Lord Anantha Padmanabha has been carved on one of the rocks. The idol is carved on the surface of the rock behind the arch like structure. We didn’t take a closer picture because we have a policy of not taking direct pictures of presiding deities inside temples !

Adjacent to this is the dilapidated shrine we spotted first when we reached the spot. 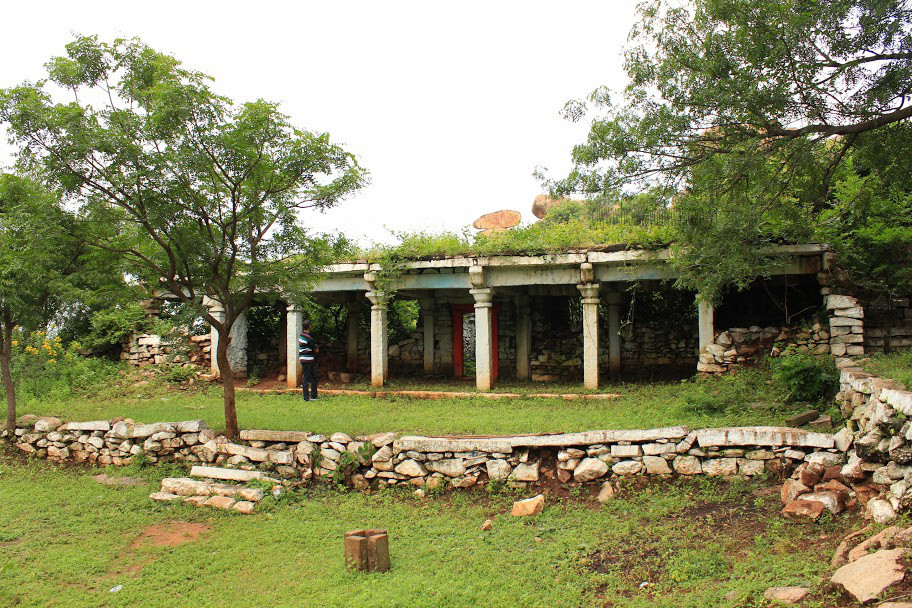 Most of the shrine has collapsed, we don’t even know if it was meant to be a temple or a shrine. There is a small ruined chamber that has a figure of Lord Vishnu carved on a slab of stone. Somebody painted it red in recent times !

We came up with our own theories about the temple, some of which were no less than a historical thriller ! This temple was the icing on the cake of our trek to Khajaguda !

The cake talk reminded us about breakfast and so we headed to Haritha Restaurant at the historical Taramati Baradari for a breakfast of hot puris and kurma.

When we drove by the rocks on Monday morning, we are sure we saw the rocks smiling back at us !

– The best time to trek at Khajaguda is early morning, you will love the fresh air and the crispness of the morning. People do some night treks as well, always advisable to go in groups.

– There is not much chance of getting lost even though there is no fixed path that you need to take.