Temples of Telangana – VI – Kaleshwaram – The Givers of Moksha !

The ancient Trilinga Desa (the land of the Three Linga) from which the words Telugu, Telangana are believed to have been derived, refers to the land between the three major Shiva Kshetras – Srisailam, Draksharamam and Kaleshwaram, on a map, they resemble a triangle. Kaleshwaram forms the northern most boundary of the Trilinga Desa and our journey to the temples of Telangana took us to this unique temple, 132 kms from Karimnagar, 64 kms from Manthani.

Driving from Manthani, the route to Kaleshwaram took us along the course of the Godavari river, for most part of this trip, the Godavari kept us company, suddenly emerging out of corners and giving us a beautiful surprise like this one.

The road was decent enough from Manthani until we reached Mahadevpur, we stopped here for a breather and a cup of tea. From Mahadevpur, the next 16 kms were slightly scary. To begin with, Mahadevpur seems like the last bustling village in this part of the state. Just after Mahadevpur, you enter the thick jungle, roads become narrower, rough and the jungle seems to be closing in on you. It is totally isolated, there are no phone signals and for the last 10 kms, there is practically no road, only path of gravel ! If you are lucky, you might have an APSRTC bus as your travel companion, we took some comfort that there were other humans around !

It took us close to 2 hours to cover the 60 odd kms between Manthani and Kaleshwaram. We reached Kaleshwaram around 5.30 PM, there was no one at the temple, all was quiet.

The Lord of the End and Liberation

At the entrance of the temple, we found an information board directing us to the Adi Mukteswara Temple, which, as per the tradition, had to be visited first to get the real spiritual benefits of your pilgrimage to Kaleshwaram. We tried walking to the temple, people told us it was only a short distance but the more we walked, the farther it seemed. It took us through the village of Kaleshwaram, a sleepy little one at that. The walk also gave us a nice view of one side of the temple, the colour contrasts of the temple walls, the overgrowth around it with the blue and white background of the sky presented a pretty picture.

Normally, we would have continued walking but our thoughts went back to the jungle route we had to take on the return and didn’t want to drive there in the dark and so, we decided to check out the Adi Mukteswara Temple later and went to the main temple.

The Kaleshwara-Mukteswara Temple is a unique temple, the temple houses two Shiva Lingas on the same platform. One is believed to be a manifestation of Kaleshwara or Lord Yama, the God of death, the End. The other Linga is Mukteswara or Lord Shiva, the Liberator, freeing you from the cycle of life, together Kaleshwara and Mukteswara are the givers of Moksha, the ultimate salvation ! You can go right inside the Garbha Griha and offer your prayers.

Though the temple of Kaleshwaram goes back in antiquity, the present structure is a renovated one but very pleasant and well maintained. We were not sure if we could click pictures but nobody seemed to object so we took a few pictures of the temple, avoiding the Sanctum Sanctorum. 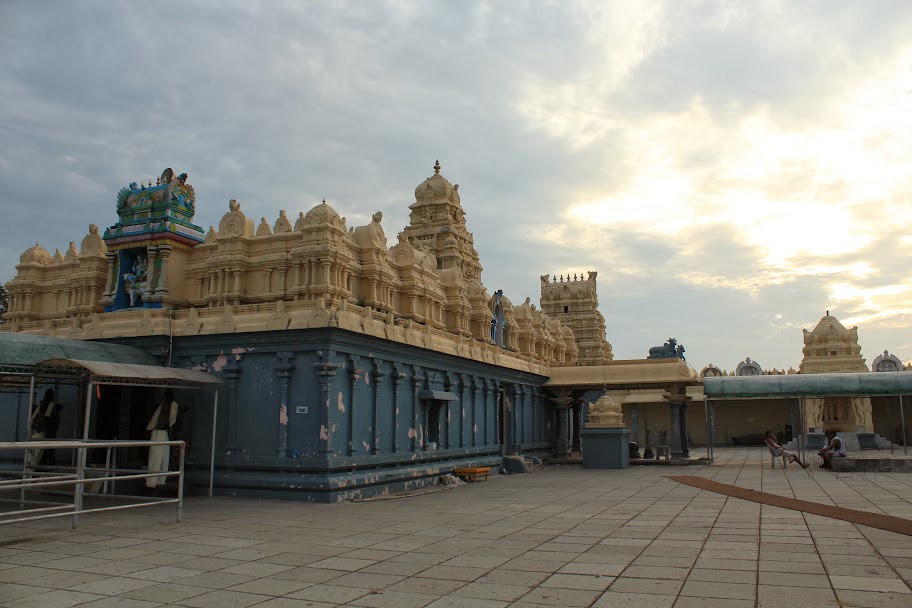 We were told the temple draws crowds mostly during Shiva Ratri and Karthika month, otherwise the temple is calm and peaceful on most days. There are a few stone sculptures around the temple, there is not much information about which era they belong to. Of all the figures, this one is interesting, a giant Matsya !

Near the Garbha Griha, there is a four sided arch called the “Yama Konam”.

It says Rs.10/- to pass through the arch, we had no idea what it was for, nobody was around to tell us. Later, we read on one of the blogs that there is a belief that if you manage to pass through the arch without your head/body touching the roof, Lord Yama would go easy on you in hell !! We didn’t try going through, we are sure, for all that we did in this life, not even the “Yama Konam” can save us from the wrath of Lord Yama !

We wound up our visit to the temple and drove down to the river. Kaleshwaram is located on the banks of the Godavari. The place is also considered the “Dakshina Triveni Sangam” since this is where the Godavari meets its tributary River Pranahita, the third river, as usual, is the Saraswathi, believed to flow as “Antarvahini” (Invisible river). Though the Saraswathi dried up thousands of years ago, it keeps popping up here and there as the invisible river, sometimes at Allahabad, sometimes at Srisailam, Kaleshwaram, it would be interesting to trace how these beliefs came about.

As you stand on the banks of the Godavari, the river stretches before you as far as you can see and the land on the other bank, we were told, is the Sironcha District of Maharashtra ! The Godavari forms the natural boundary between Andhra Pradesh and Maharashtra. 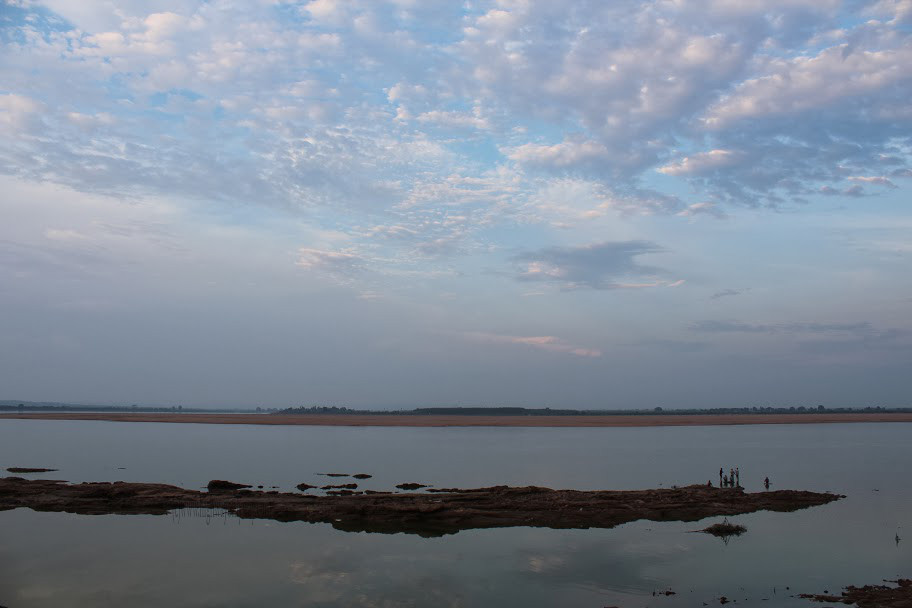 We found it exciting to see the Political map of Andhra and Maharashtra live !

Boats ply on the river carrying people to and fro between the 2 state boundaries, we met a family that was just alighting from a boat who were coming back from a trip to Maharashtra, they told us, people in and around Kaleshwaram found it convenient to take a boat ride to Sironcha for most of their daily needs than taking a bus to a nearby town in Andhra Pradesh !

We couldn’t spend as much time as we wanted to near the river, one, we were getting late and two, the place is highly polluted, slush, moss and what not, we wouldn’t say it is exactly a great place to sit on a pleasant evening !

Before we took leave of Kaleshwaram, we wanted to visit the Adi Mukteswara temple. The drive from the river takes you through the narrow lanes of the village, it was an exciting feeling to drive through the last village within the Andhra Pradesh boundary !

The Adi Mukteswara temple is a small shrine located in the middle of fields, about 1 & 1/2 kms from the main temple.

The setting is very peaceful. We offered our prayers here, hoping Lord Yama would be kind to us !

Darkness of the jungle !

Evening was closing in on us as we left Kaleshwaram, we had a few jitters thinking of the drive back through the forest area with the terrible road. This time we did not even have the APSRTC bus for company. That did not stop us from stopping by to click pictures of the sunset colours.

We tried taking pictures of the gravel road and the dark forest, not a great catch but couldn’t do any better because we were feeling very exposed outside the car, so we just clicked whatever we could and rushed into the safety of the car ! We don’t even remember what the camera settings were, the camera seemed to have decided something on its own because the view that we had was not half as bright as this. Was it the camera or was it something else? Spooky !!

The drive was scary but thrilling, we even switched off the headlights for a second and boy, you must experience the stillness, silence and the darkness around !

Closer to Mahadevpur, we came across people heading towards Kaleshwaram area on bikes/cycles, must be very brave people but probably for them, it is their daily routine, their fight for survival takes them through isolated forest area, how do they manage if they have a flat tyre or their vehicle breaks down? When you see such things, you suddenly feel how blessed you are to have your comforts.

With such philosophical thoughts, we reached Mahadevpur, it was a relief to be back in din of the town. From Mahadevpur, our next destination was Warangal, 102 kms away, where we were to stop over for the night and continue our trip the next day. With decent roads, we reached Warangal by 7.30 PM and checked in to AP Tourism’s newly opened hotel Haritha Kakatiya, for the heck of it, we chose a Suite, it cost us Rs.2500/- but it was fun. Our long, adventure filled day ended in sheer comfort and luxury !

– Kaleshwaram can be reached by bus from Karimnagar, Manthani, Godavarikhani, Warangal. If you want to take a train, Ramagundam would be your nearest railway station at 92 kms.

– On most days the temple is not crowded at all, Shiva Ratri and Karthika month may is usually the peak season. The place could also attract huge crowds during the Saraswathi/Godavari/Pranahita Pushkara time.

– There are a few choultries run by the temple if you want to stay at Kaleshwaram. For more information on the accommodation, sevas and temple timings you could check their website http://kaleshwaram.org/

– There are a few shops and small food stalls near the temple.

– Be a little careful while driving through the forest area, we might exaggerate a bit but there is nothing much to worry, just make sure you don’t end up with a flat tyre or without a spare tyre, especially after dark. You never know what lurks in the dense forests !

6 thoughts on “Temples of Telangana – VI – Kaleshwaram – The Givers of Moksha !”