We would not have known about the Ghanpur temples if not for the old watchman of the house where we previously lived. He hailed from Ghanpur and usually spoke volumes about his village. Out of curiosity, we turned to the internet and found out that there were 2 Ghanpurs in Warangal, we were familiar with one having passed by the railway station countless times between Hyderabad and Warangal, the other one got our interest as it was home to some ancient temples, the Ghanpur group of temples or Kotagullu in the local language.

Though very close to the illustrious Ramappa Temple, Ghanpur doesn’t usually figure in the tourist destinations of Warangal because until a few years ago, the temples were almost forgotten. We were wary of venturing here on our own but we read on the internet that the 2013 Kakatiya Festival had just concluded at Ghanpur which meant there would atleast be a reasonable access to the temples !

From Warangal, it took us about an hour to reach Ghanpur, the road was beautiful with greenery around, especially as we neared Ghanpur. Enroute we passed by the Ghanpur Lake, another one of the brilliant irrigation ideas of the Kakatiyas !

The milestones indicated that Palampet, where the famous Ramappa Temple is located, was only 9 kms from Ghanpur. So, basically, the Kakatiyas dug up these lakes and built beautiful temples close to their banks, the Ramappa temple too is located on the banks of the Ramappa Lake.

Ghanpur, probably named after the famous Kakatiya king Ganapatideva, is today a tiny village, we had no problem in finding our way to the temple, thanks to the Kakatiya Festival that had concluded just a week before, the cut outs and welcome boards were still in place to show us the way.

As we entered the temple complex at the end of the village, the first thing that got our attention was the brand new AP Tourism’s restaurant, Haritha Ghanpur !

And then, we saw the Ghanpur temple, slightly restored, mostly in ruins but its beauty intact !

Inspite of it being a National Holiday, there was nobody at the temple except a few kids playing cricket in the open area before the temple and a few workers going about the restoration work. It is wonderful when you can visit places like these when it is all calm and quiet, just be cautious if there is no one around, though !

The temple is almost in shambles, stones and sculpture strewn everywhere, From the pictures on the internet, you can see that it was in a much more bad state before the restoration works began, atleast now there is some hope.

At the entrance, 5 small shrines stand in a row like soldiers guarding the temple, there is no trace of the Deities inside these shrines.

The main temple is flanked by two other temples, both of which are almost crumbling but even in that state, you cannot miss the architectural brilliance !

This is all that is left of the temple inside.

To the left of the main temple, there is a mandapa that is in ruins, the pillars are all ready to collapse, only ASI’s restoration works and its own will to stand the tests of time seem to be holding it ! 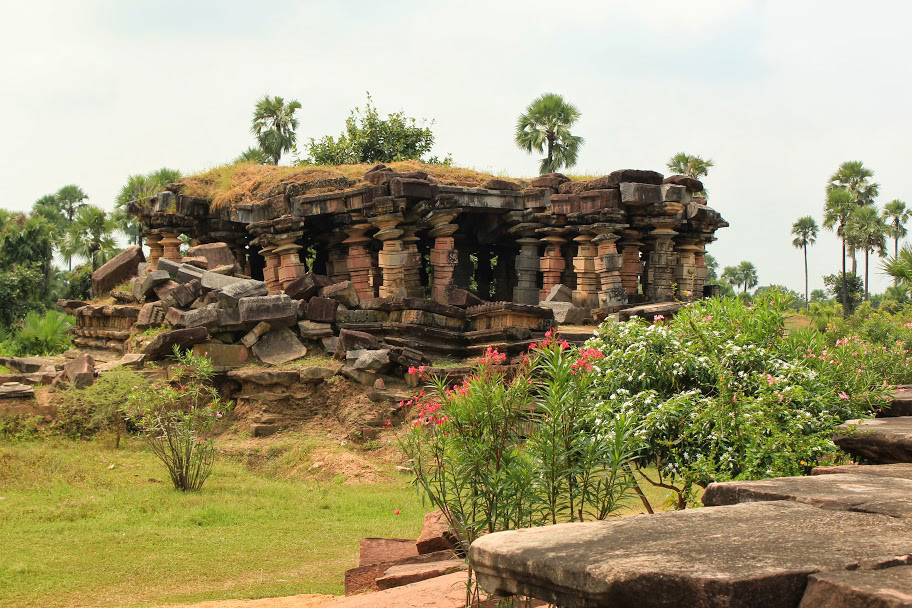 Was this mandapa some kind of an audience hall? Was this where people enjoyed dance, music and arts?

The stone blocks look like they are ready to fall any moment, how long before they are restored? Would restoration rob them of their original charm?

Between these two structures stands the grand temple of Ghanpur ! 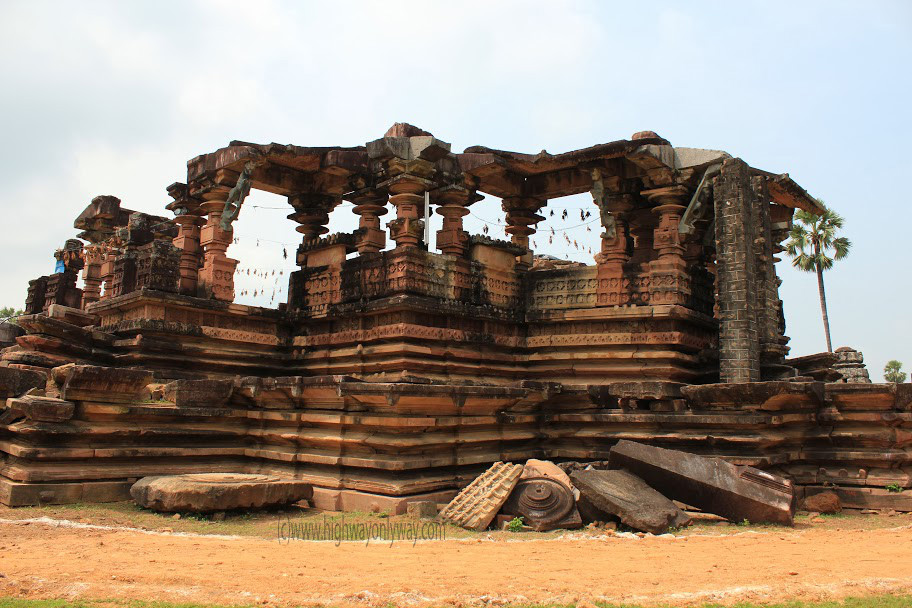 The roof has collapsed, the gopuram gone but its similarity to the Ramappa temple is striking !

May be it is because of the open to air interiors of the temple as it stands today, it does look bigger and grander than the Ramappa Temple. 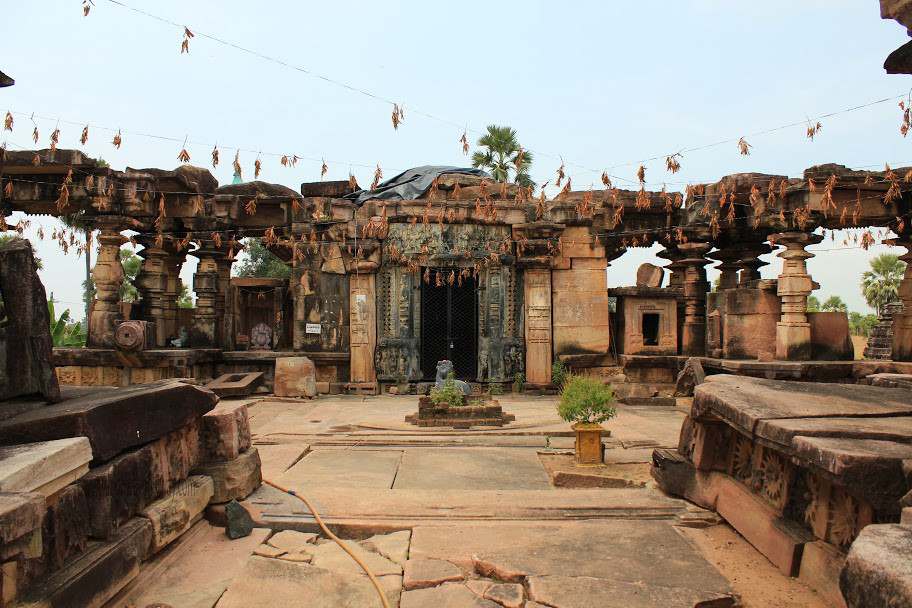 The temple is not a live temple but some pujas are performed daily. A lone Nandi stands in the middle of the temple, opposite the Sanctum Sanctorum, waiting on Lord Shiva, the presiding Deity. The temple is a sight to behold, you cannot but wonder why, with all our advancements in construction techniques, we haven’t been able to build such masterpieces?

You could call the Ramappa and the Ghanpur temples as “twin temples”, both the temples were probably built around the same time period, under the reign of the same king Ganapati Devi, both have lakes built by the Kakatiyas nearby and are so alike in their architecture and sculpture !

Take this panel at the entrance of the Garbha Griha for example. 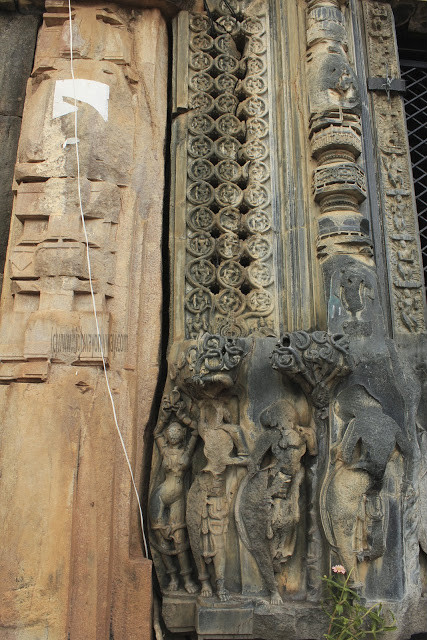 This is another figure that seems to be a popular design of the time, you will find this not just at the Ramappa temple but in several other temples in South India ! 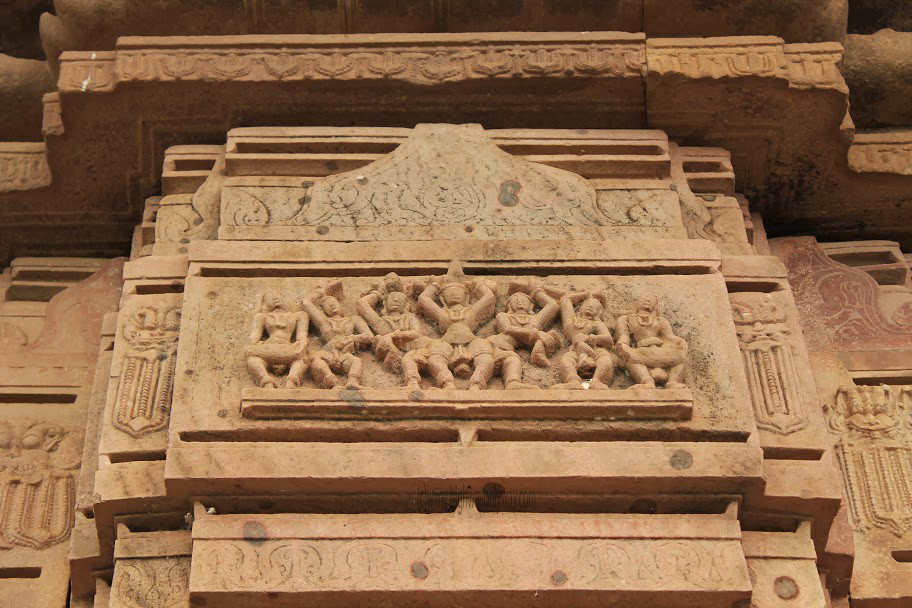 The elegant Madanikas of the Ramappa temple find their way to the one at Ghanpur, only the beautiful ladies of the Ghanpur temple are hidden behind these support pillars and lack the lustre of their counterparts. 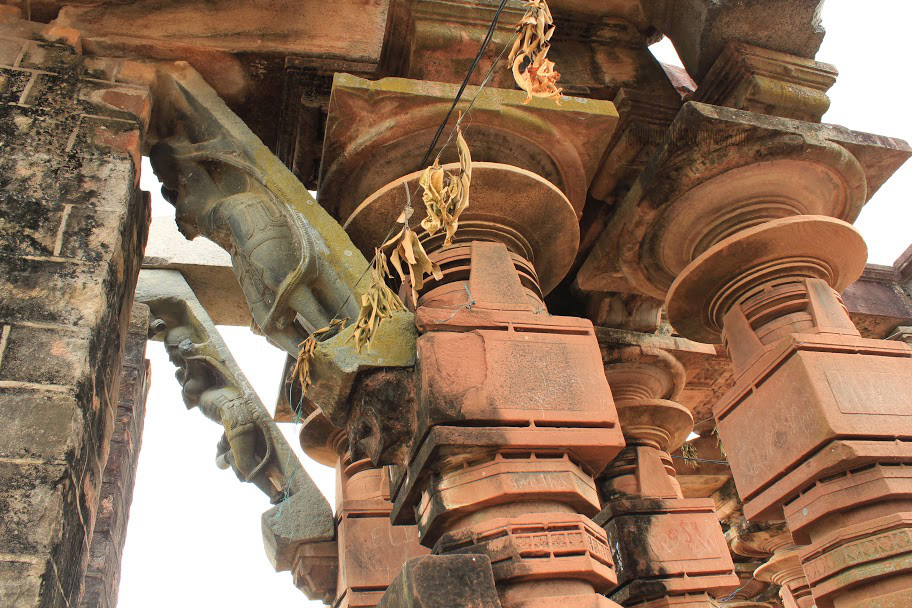 Rows of elephants, sculpture of women and other designs adorn the outer walls, again a similarity between both the temples.

Like all twins, these two temples have some differences, the most significant being the sculptures of “Gaja Kesari” at the Ghanpur temple. Gaja Kesari is a mythical figure of half lion, half-human, half horse mounted on an elephant’s head and a half lion, half horse, again standing on an elephant ! We don’t remember seeing these at the other temple. 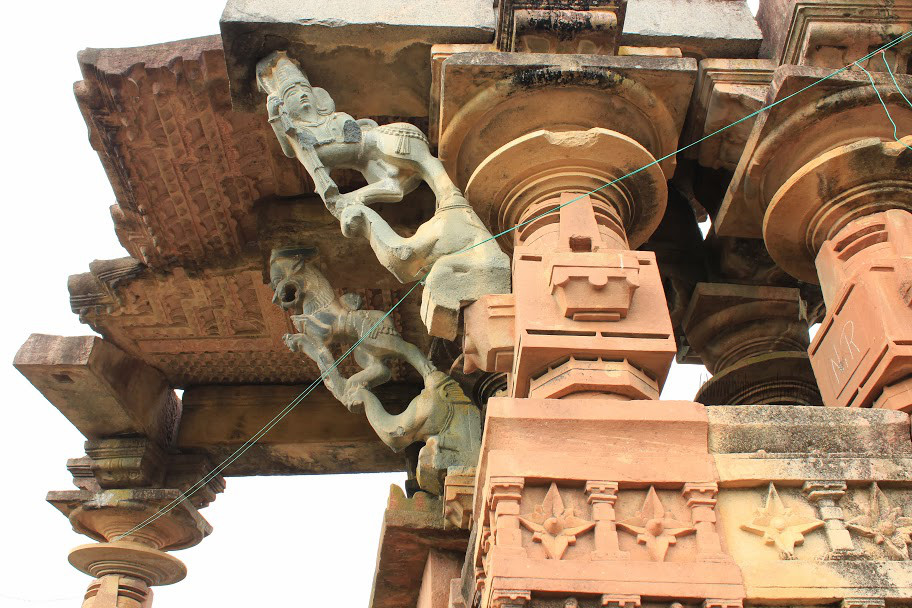 Wish we know what these figures mean, how did the sculptors decide which design went where? Was it random or did they have a plan? Fascinating to think !

Without even realizing, we had spent an hour at the temple and we still couldn’t stop admiring it and clicking pictures !

We, finally left around 12 noon, when another group of visitors came along. Before we left, we overheard an amusing conversation about how an Andhra leader had laid the foundation for the restoration works of this Telangana temple ! About the temple, they too had the same thing to say “how did they build such temples 800 years ago without any machinery, why haven’t we been able to do even half of this today?” Well, 800 years ago or today, the watchwords seem to be passion and commitment !

On our way back to the parking lot, we found a few sculpture panels at the Haritha restaurant, they originally belonged to the temple, now they are in display near the restaurant. This huntress pulling out a thorn from her foot, again a favorite of most ancient temples !

The Haritha Ghanpur restaurant did not have even a water bottle, we don’t hold it against them because the restaurant had just started and there were hardly any visitors yet. The people there told us, they would start stocking up when the tourism activity picked up at Ghanpur. We hope it happens fast !

We also stopped near the Ghanpur Lake on the return for some pictures but did not venture near the lake. We reached Warangal by lunch time, Haritha Kakatiya offered a simple, delicious lunch. A few hours of rest later (the rest was to get the maximum out of the Rs.2400/- we paid for the Suite) and then started back to Hyderabad, we had one more place to visit before we headed home.

– Ghanpur is an hour’s drive from Warangal and about 20 minutes from Ramappa Temple. You can cover both in one trip. It might be a little difficult to find transport to Ghanpur, advisable to have a vehicle of your own or a cab.

– There are no specific timings for the temple, you could probably go after 9 AM and before 5 PM.

– Though the restaurant is not fully functional at the moment, as it picks up business, food should not be a problem here.

– Unlike the Ramappa lake, there is no boating activity at Ghanpur lake.

– The Haritha resort at Ramappa temple is the nearest place for accommodation, the best option is Warangal.