Our last trip to Ahobilam in January 2012 ended a little abruptly because we were too exhausted after trekking 14 kms to one of the Nava Narasimha Temple. Since then, Ahobilam would crop up in our travel plans every now and then but either it was too hot or it was just after the rains and risky to trek. Finally, close to 2 years after our first trip, during the 2nd week of December 2013, we set off on another trip to Ahobilam, a group of 10 people in 3 cars.

Being punctual to the Hyderabad Standard Time, we started our journey at 11 AM, 2 hours behind schedule. Where we had planned to have lunch at Ahobilam directly at 2 PM, we stopped for lunch at Kurnool at the New Taj Palace hotel, located just after the Kurnool Toll Plaza. These days, driving on NH44 upto Kurnool is nothing short of driving in the city ! There were no complaints though, the food was simply awesome. Most restaurants in Hyderabad seem to be following the same standard recipes and the food isn’t different from one restaurant to the other and so the spicy hot food at Kurnool was a welcome break.

We took the Nandyal road from Kurnool towards Ahobilam, while the National Highway is sleek as ever, this road is in a terrible shape. Potholes everywhere, in some places there is no road at all, just a gravel and dirt track. In fact, when we reached Nandyal, there was chaos, roads being laid, flyover construction, traffic and pigs running in the middle of the din ! On the bright side, the road was being relaid, so hopefully the next time we pass through the Kurnool-Nandyal highway, things would have improved.

By the time we inched our way out of the bad roads, the sun was already setting for day.

It was 7 PM when we reached Ahobilam, an 8 hour journey for 350 kms ! We checked into AP Tourism’s hotel, the rooms had been booked earlier through the internet. Haritha hotels are usually pleasant to stay at.

We visited the Prahalada Varada Temple at Diguva (Lower) Ahobilam and spent some time at the temple admiring the sculpture and having a story telling session on Lord Narasimha Avatar, there were some people in our group who didn’t the know story !

Dinner was at the Udipi Hotel near the temple. This humble hotel offers the best food in Ahobilam. Run by an elderly Brahmin, the hotel serves you simple vegetarian food, the food tastes heavenly !

Reaching Ahobilam late meant, we had to drop our plans of visiting Bhargava Narasimha temple, one more unfinished task at Ahobilam. We turned in early for the night as we had a long trek ahead of us.

Our trek began early next morning after breakfast at the same Udipi Hotel. After our guide from the temple dumped us by not turning up, we engaged another guide associated with AP Tourism hotel.

The trek to Jwala Narasimha Temple is not very taxing, though you have to negotiate your way through rocky paths like this. 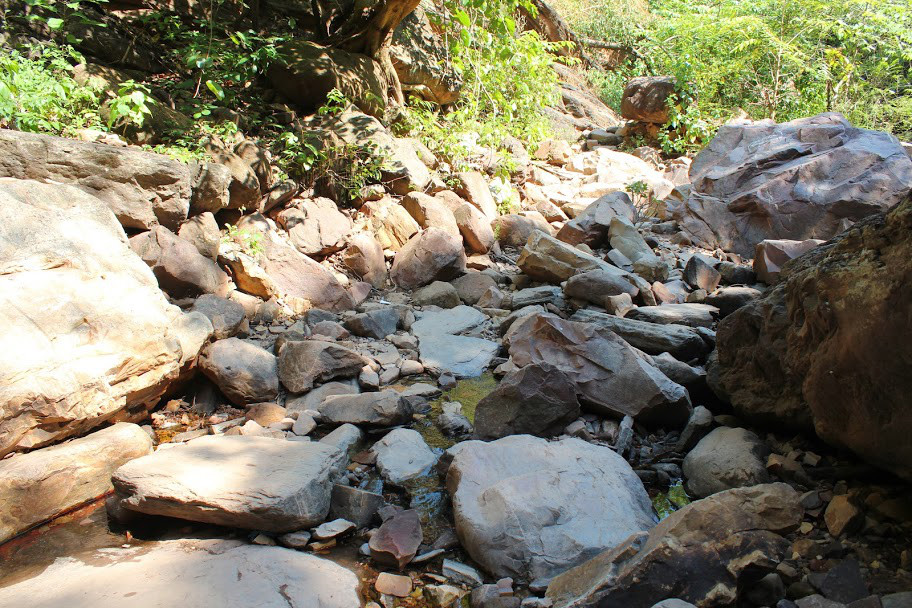 The 30 minute trek will leave you a little tired, especially if it is a hot day but the silence of the forest and the greenery of the hills somehow seem to give you all the energy. Half way up the trek, we spotted the Ugra Sthambham, our next trek destination. One look at it was enough to give this writer some serious jitters ! 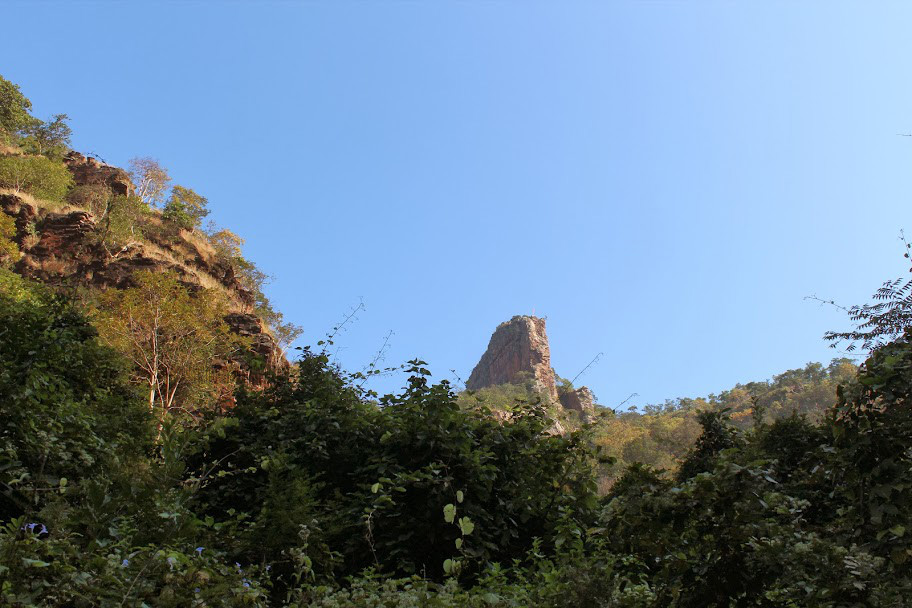 We joked a bit about the trek and the risks until our guide chided us politely that trekking in Ahobilam was supposed to be done with sincerity and total surrender to Lord Narasimha, he said the treks were little risky, the forests were full of wild animals and the grace of Lord Narasimha alone would get us back safely ! While we respected his point of view and decided to shut up, it also got us thinking why do we link fear to devotion? Was the fear of the unknown the main reason why man began considering an all protective Divine Force in the first place?

Centre of all the action !

Moving on, the Jwala Narasimha Swamy Temple is on the edge of a hill, almost like a rock cave temple, when you see it from a distance, it looks like an opening on the face of the hill.

As you reach the narrow path leading to the temple, this view is sure to leave you stunned ! 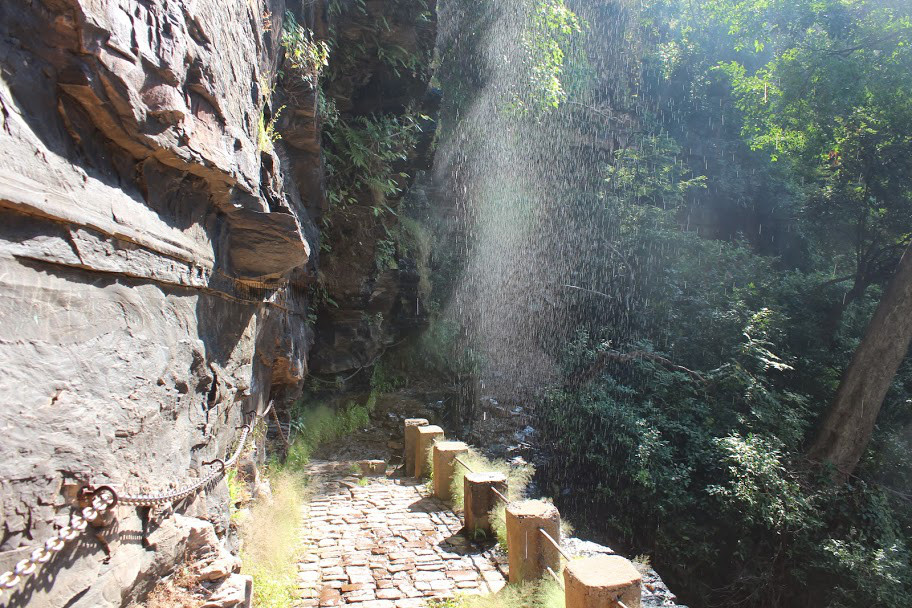 A waterfall cascades down the hill forming curtain over the narrow pathway leading to the temple and you actually walk behind this waterfall. There was just a spray of water in December, if you visit this place just after the rains, you will have to walk behind a full fledged waterfall. Even walking behind that light drizzle of waterfall was a thrilling experience for us, just imagine if the waterfall was full !

We were told this waterfall is called the “Akasha Ganga”, the waterfall is believed to have been sent down from Heaven to cool down Lord Narasimha’s anger after killing the demon Hiranyakasipu.

It is a little slippery here and the path runs along the edge. It ought to be scary but thankfully,there is a barrier between the path and the edge so you don’t stray too close to the edge, just be careful of your step, if you slip you might break your back and slip a little too hard over the barrier, there is no saying where you will land up !

Along the path, you will find a tiny water hole with muddy coloured water oozing out, our guide told us it was called the “Rakhta Kundam”, believed to be a pool of water where Lord Narasimha washed his hands after killing Hiranyakasipu and to this day the water oozing out has a reddish tinge ! You could always say it is because of the colour of the soil but isn’t it more interesting to believe Lord Narasimha really touched these waters? 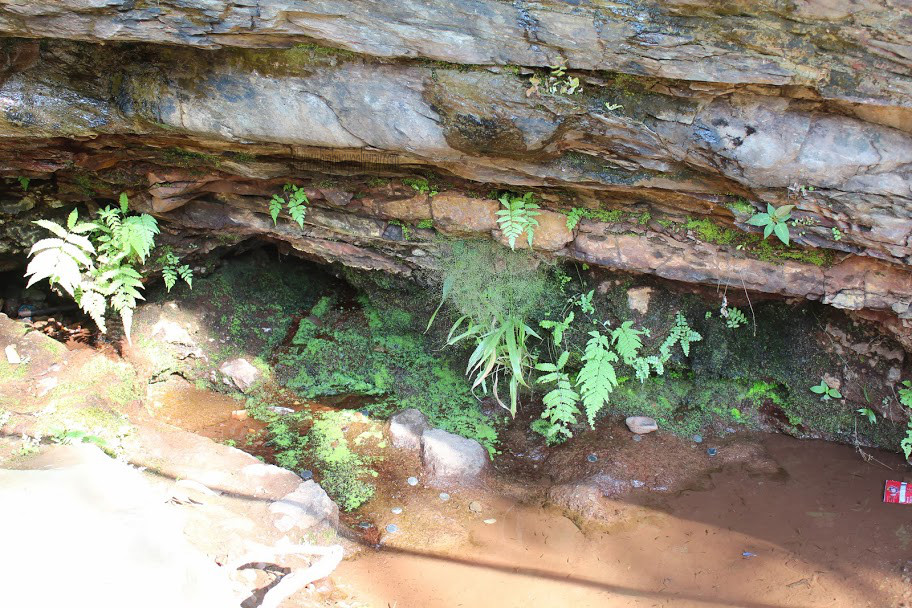 The Jwala Narasimha Swamy temple is actually a small shrine located under a rock shelter, the temple structure is probably a few decades old. Inside there are idols of Lord Narasimha killing the demon with idols of other Gods standing as witnesses. Our guide told us that the entire area of Ahobilam was actually Hiranyakasipu’s palace and it was at the spot where the temple stood that Lord Narasimha actually killed the demon. Jwala means flame and this is where Lord Narasimha was at the peak of his anger.

One of the rock panels on which the idols are sculpted has figures of Lord Narasimha fighting the demon and water drips on only Lord Narasimha from the rocks above while the figure of Hiranyakasipu is dry ! This again was meant to cool the angry Lord. Of course, the idols are positioned in such a way, still, it makes an interesting story !

After offering our prayers, we prepared for ourselves to the most exciting part of our trek, the trek to Ugra Sthambham. Before that, the Akasa Ganga cast a beautiful rainbow as the sun shone through the droplets of the waterfall. 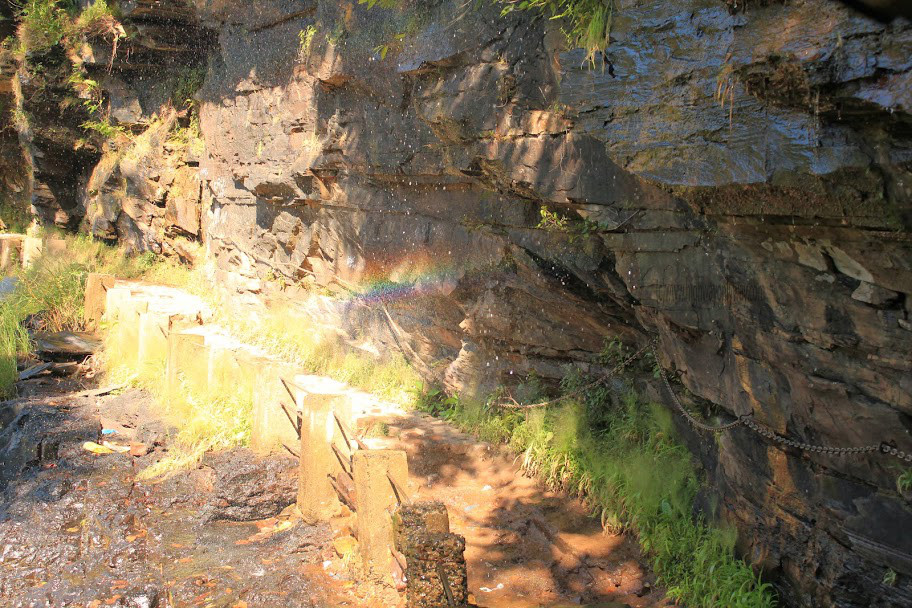 Sometimes, more than the fear of the unknown or the stories of miracles, it is in this simple and soft beauty of nature around you that you really feel presence of Divine !