Since the last decade, every time we visited Tirupati, somehow, a trip to Sri Kalahasti was not on the cards. This glorious temple dedicated to Lord Shiva in the form of the Vayu Linga is one of the Pancha Bhoota Sthalas and only a half an hour drive from Tirupati. This time, we decided to complete this long pending visit to Sri Kalahasti.

Planets to our rescue !

Sri Kalahasti, apart from being an important Shiva temple, is also famous for the Kalasarpa Dosha puja to Rahu and Ketu, the two astrological planets that cause problems in people’s horoscopes and it is believed that performing this puja would remove the bad effects of these two planets. The plan to visit Sri Kalahasti came up because the head of our family thought we needed help from Rahu and Ketu to drive some sense into our lives !

It took us about 2 hours to reach Sri Kalahasti from Nellore. We reached around breakfast time and tried the Chennai Saravana Bhavan hotel. Don’t get carried away by the name, these hotels in Sri Kalahasti are only franchises and close to the original in taste but we suppose it doesn’t matter if you are grabbing a quick bite.

The duration of the puja is around 30 minutes, with the priest instructing you how to go about it.

The Sri Kalahasti temple has a history of over 1000 years starting from the Pallavas to the Cholas, the Vijayanagar kings and so on. In addition to its ancient history, there are several legends and stories associated with it. You could read all these interesting stories on the internet. The temple’s architecture reminds of you of the massive temples of Tamil Nadu, especially the one at Thiruvanaikoil in Srirangam, most of these temple were built around the same time period.

Temples like Sri Kalahasti are like a maze, they are so huge that you are sure to lose your way in the labyrinth of corridors and pillars and your mind will stop recording the thousands of figures and sculpture after a certain point. You don’t just visit these temples, you experience them !

Inside the dark sanctum is the Vayu Linga. They say the lamps inside the Garbhalaya flicker even though there is no window or opening inside the chamber because of the presence of the Vayu Linga. We don’t know if it is true but we did find the lamps swaying slightly. Symbolic of God being Omnipresent like the air?

In the din of the temple, we lost sight of our family and after a few frantic and panic filled moments, found them near the Goddess Prasunamba’s shrine. The view of the Goddess’ idol in the dark sanctum lit up by the oil lamps is an unforgettable sight !

We left the temple around lunch time and headed out to visit a few places in the vicinity.

Before we headed out for lunch, we visited the Bharadwaja Ashram, just a kilometer from the temple. There is a small temple here but the main attraction is the temple tank and its serene surroundings. 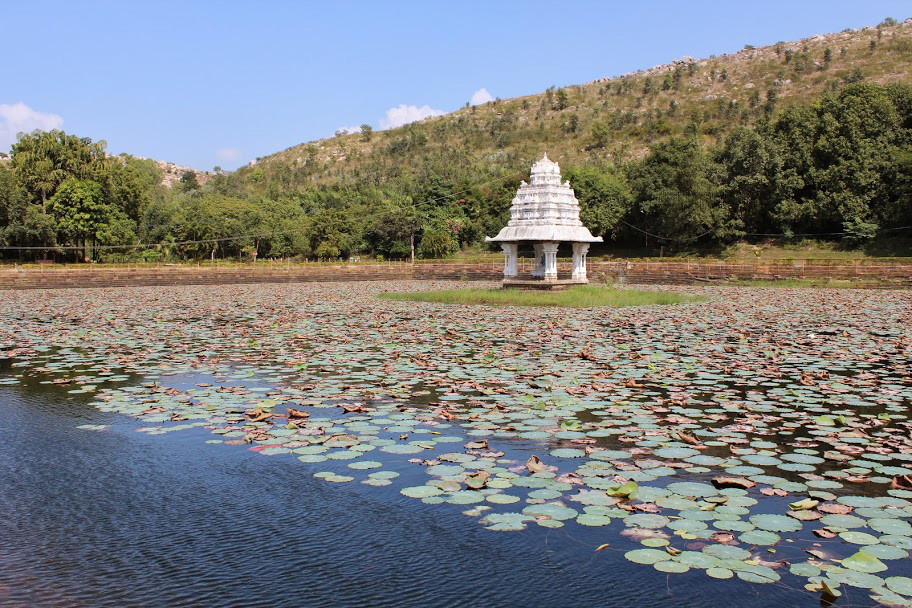 It was a hot afternoon but somehow it felt very cool around here, it could be the breeze or the water or the silence of the ashram, it could even be the sight of these ducks relaxing in the water !

In 2010, the 500 year old Raja Gopuram of Sri Kalahasti temple built during the reign of Sri Krishnadevaraya collapsed due to negligence and some drilling work nearby. The gopuram was one of the tallest temple towers in India. Today, the gopuram’s stones lie in a rubble near at the entrance of the Bharadwaja Ashram.

Some more lie near the parking lot, surrounded by filth and litter. We couldn’t bear to stand there even to get a proper picture, the foul smell was nauseating. 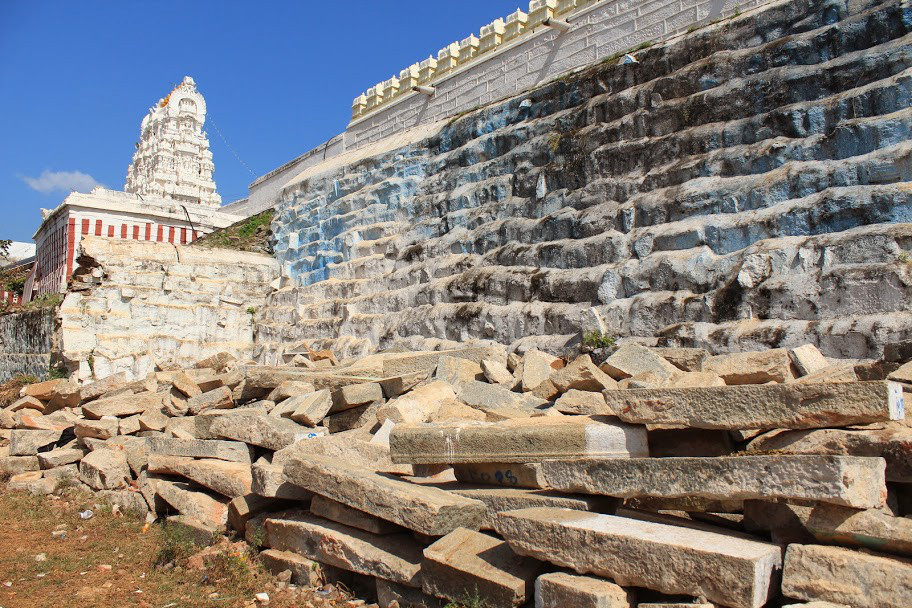 The government is rebuilding the gopuram and it plans to use the same ancient stones. If that is the plan, then why are these remnants of our heritage left out in the open and subjected to such disrespect? Will we ever learn to take care of our ancient history?

We had lunch at another Chennai Saravana Bhavan and as the previous one, the food was just about alright.

One of the popular legends associated with Sri Kalahasti is the story of Bhakta Kannappa, a tribal who a was a devotee of Lord Shiva and worshipped an idol on top a hill near Sri Kalahasti. It is said that being a crude tribal, Kannappa would clean the idol with water held in his mouth and place meat as offerings. So the story goes that Lord Shiva to test his devotion, caused the temple to collapse and when the falling stones injured the idol, the Shiva Linga’s eye bled, he plucked out his eye and placed it in the place of the bleeding eye. The other eye began to bleed too and Kannappa plucked out both his eyes and gave them up for the Lord ! Pleased with his devotion, Lord Shiva restored both this eyes. This story of Kannappa is believed to have happened in a steep hill very close to the temple.

We’ve been meaning to visit this hill during all our previous visits but it materialized this time. We had assumed it to be a difficult climb but it turned out to be a rather easy one, there are about 200 steps and they are not as steep as they look from a distance.

The entrance to the hill is within the temple premises. As you climb up the hill, you get a view of the Kalahasti temple.

The climb also gives you some lovely views of the Swarnamukhi river on whose banks the temple has been built, a hill on the opposite side where a temple for Goddess Durga has been built and a view of the Kalahasti town. You can also see the place where the original Raja Gopuram once stood, construction work is in progress.

At the top of the hill,is the temple where Kannappa is believed to have worshipped Lord Shiva, the Linga has carvings in the shape of eyes.

It is very pleasant up here, even in 3PM heat, the breeze was refreshing. Even more refreshing was the glass of buttermilk that we had on the way down the hill, a few old women climb all the way up here in the hot sun to sell buttermilk. We also spotted to boys walking into the woods with their musical instruments. They told us they came up there to practice.

They even told us that there was route on the other side of the hill that would lead to the Bharadwaja Ashram. As we were leaving, the air was filled with the music from their instruments, though not perfect, the boys seemed to be having fun.

We left Sri Kalahasti with a very happy feeling. Rahu and Ketu seemed to be pleased with our prayers !

– Sri Kalahasti is 32 kms from Tirupati and is easily accessible by train and bus.

– There are a few hotels at Sri Kalahasti if you plan to stay overnight or you could stay at Tirupati.

– On most days, the temple has a decent crowd, weekends and Mondays see bigger crowds. During Shiva Ratri and festivals, the temple is thronged by lakhs of devotees.

– The Sukhabramha Ashram is another place of visit nearby.

One thought on “Vacationing in Vikramasimhapuri – III – Pancha Bhoota Sthala – Sri Kalahasti – Omnipresent like the air !”