Standing out of the cement industrial skyline of Tadipatri, a bustling town in Anantapur district, are two architectural marvels – the Chintala Venkataramana Swamy Temple and the Bugga Ramalingeswara Swamy Temple, the twin temples of Tadipatri. These 500 year old temples belonging to the Vijayanagar period are a perfect treat for those who love history, architecture and sculpture.

After our visit to the natural wonders of Belum Caves, we drove 27 kms to Tadipatri to see the man wonders of the town. We had initially planned to visit Tadipatri on the return but we had lot of time on hand, so ticking off Tadipatri seemed to be a good idea. Chintala Venkataramana Swamy Temple was our first stop.

Our interest in visiting this temple was to see the gigantic ruined base of a Gopuram, we had seen pictures on the internet and were amazed by the sheer size of it. When we reached the Chintala Venkatarama Swamy Temple, somehow the gopuram wasn’t as big as it was supposed to be and it looked like it had been rebuilt, for a minute, we thought we were at the wrong place ! We asked a few people around and they told us that the temple was renovated a few years ago. Forget the size, one look at the sculpture on the base and you know what lies in store inside the temple !

When you enter the temple, all that your eyes can take in is sculpture ! Starting from this stone chariot, a miniature version of the famous stone chariot of the Vittala Temple in Hampi, you will find striking similarities between this temple and the ones in Hampi. This chariot is an absolutely “cute” piece of sculpture !

This pretty Tulasi Kootam is nearby, you would find a similar looking one next to the stone chariot at Vittala Temple.

The temples at Tadipatri were built by local chieftains of the Vijayanagar empire. We had written in an earlier post about how the sculptors of ancient times seemed to have some strict sculptural standards, how else did they ensure that their temples had the same signature style across the entire kingdom? Hampi and Tadipatri are 200 kms apart, yet, the temple style is so alike !

The outer walls of the temple are flooded with sculpture, mostly scenes from Ramayana that remind you of the Hazara Rama Temple at Hampi.

Check this panel depicting Lord Anjaneya’s adventures in Lanka while searching for Sita – seeking Lord Rama’s blessings, meeting Sita and receiving her Choodamani as proof for Lord Rama, destroying Asoka Vana, getting captured and his face to face with the 10 headed Ravana, they have even included the scene where Anjaneya uses his tail to make a seat higher than Ravana’s when the latter insults him by not offering a seat ! Now, what can you say about such artistic brilliance? 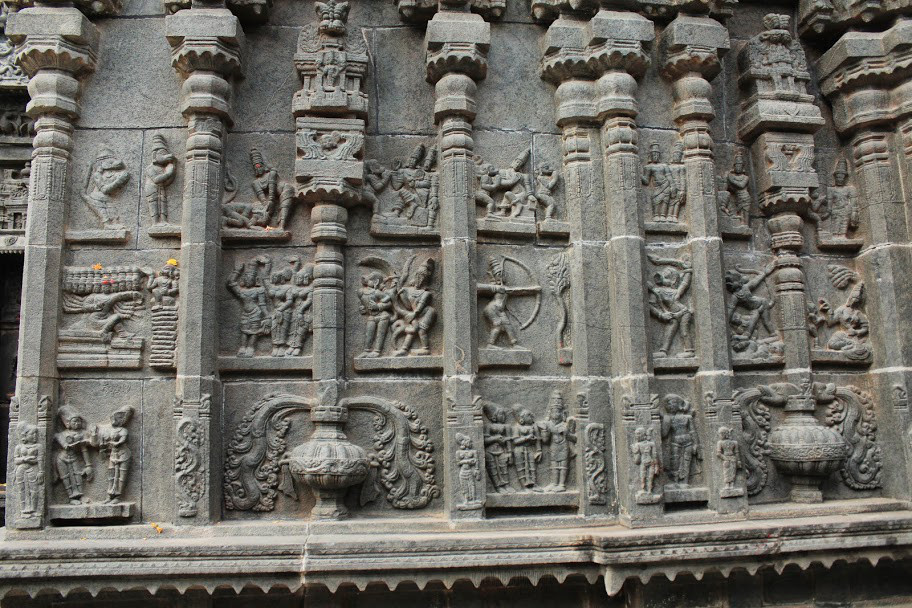 These ornate pillared corridors again took us back to Hampi, this time to the Virupaksha Temple.

One difference between the temples Hampi and Tadipatri is the kind of stones used to build them, unlike the Hampi temples, the ones at Tadipatri seem to have been built using black stone. Even to this day, Tadipatri is well known for its black stone industry.

Take a stroll around the temple and lose yourself in stories from Hindu mythology, beautifully etched in stone ! 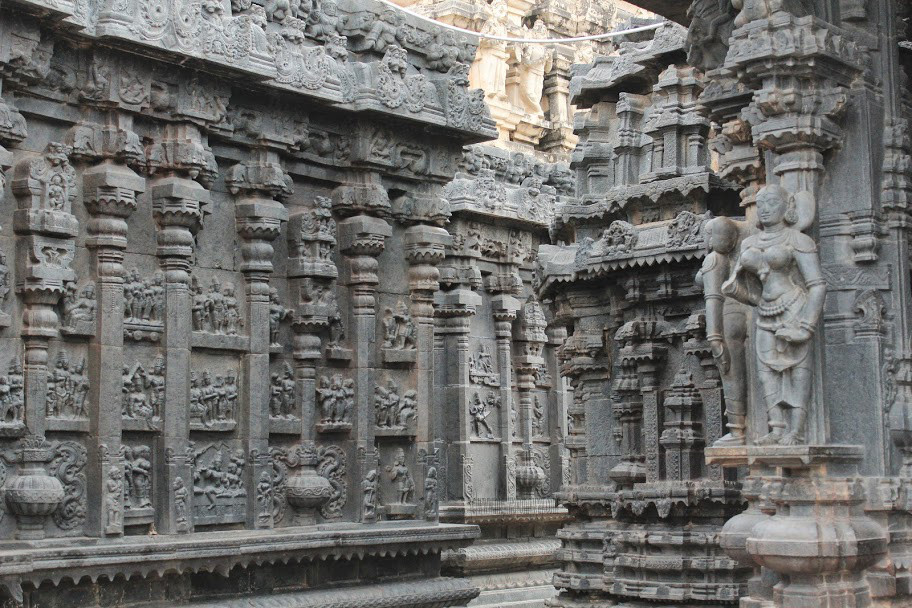 The Garbha Griha is again typical of all the grand Vijayanagar Temple. Lord Vishnu, as Venkata Ramana Swamy holds court inside the Garbhalaya.

Flag bearers of culture and heritage

While we were busy admiring the art and sharing notes, an old man walked up to us and admonished us for conversing in English in a temple when we should have been speaking in either Telugu or atleast Hindi.Before we could figure out what his problem was, he walked off with an expression that said “these westernised youngsters ! No respect for their culture and heritage !”

We could have gone behind him and told him that we were so well versed in as many as 4 languages that we usually switched between them at intervals but we only smiled after him deciding to let the “fanatic old man” be. It is sad that standing in a land that was once ruled by Sri Krishna Deva Raya, who embraced Telugu, a language that was not his own, we are still talking about linguistic intolerance ! We love our languages, our dialects, culture, our heritage but we also know we are citizens of the world and no single culture or language can be exalted above the rest.

As we turned around to take just that one more picture of the temple, we could see the evening crowd chanting the Vishnu Sahasranamam. These temples were built as seats of learning, to promote art and culture and serve as community platforms. For 500 years they have stood as reminders of our heritage and for years to come, they shall ensure that we don’t forget it, we might write about them in a foreign language but the essence remains the same.

Less than a kilometre from Chintala Venkataramana Swamy Temple is its twin, the Bugga Ramalingeswara Swamy Temple. Both these temples were built around the same time period but were commissioned by two different chieftains. You could check the internet for interesting stories on how the temples got their names and some legends associated with them.

The Bugga Ramalingeswara Swamy Temple is located on the banks of the Penna river. Today, there is nothing left of the river except its dry bed.

For someone like this photographer, who hails from Nellore, that is a very familiar sight, in fact, we’d be surprised if the Penna had water ! Yet, for the love of our river, a picture of the Penna is mandatory, especially when the sun rays seem to touch down on it.

Walking beside the Penna banks from the parking lot, you are greeted by the plain, simple looking, differently shaped Gopuram of the Bugga Ramalingeswara Swamy temple. 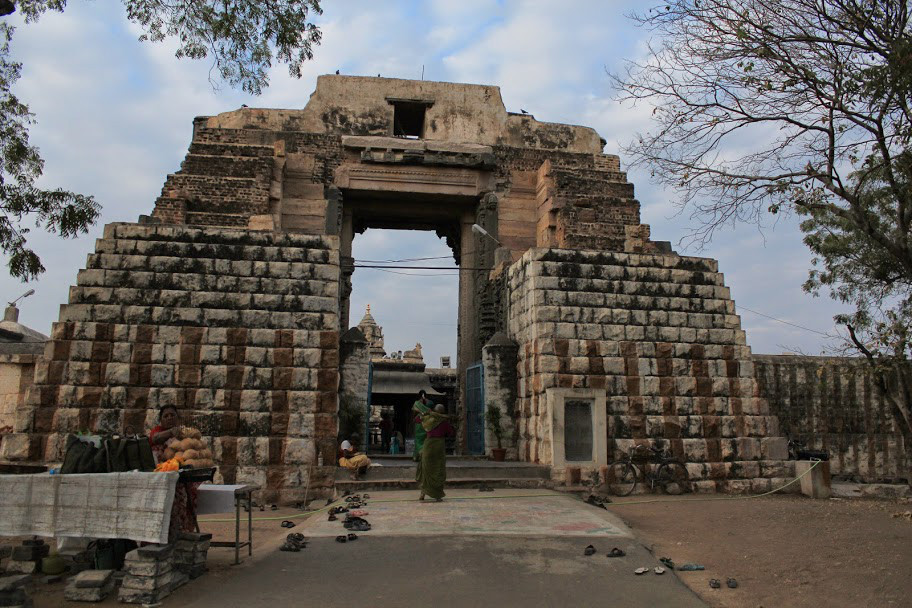 It took us some observation to realise that a support wall has been built around it to hold the existing structure, this side of the Gopuram and the main part of the Gopuram seem to have fallen off ! And then, when you cross over to the other side, the stunning face of the base of the Gopuram emerges. The imposing structure stands before, bejewelled with such richness of sculpture that will make you go “whoa” !

After several attempts, some to the amusement of onlookers, we finally managed to capture the whole base structure in one frame !

Dedicated to Lord Shiva, the Bugga Ramalingeswara temple gets is name from a stream that is believed to flow underground which oozes water around the Shiva Linga.

We need not enumerate the identical styles of the twin temple of Tadipatri. This picture will give you an idea.

A few differences stand out like the Ramalingeswara Temple faces West, the Garbhagriha and the mandapa are not as decked up with sculpture as the Venkata Ramana temple, this comes across as a simpler version with stories of Lord Shiva.

That is what we thought until we went around the temple for a Pradakshina and saw this and almost fell back in surprise !

The massive, mountain-like, heavily sculpted, frighteningly beautiful but incomplete North Gopuram ! This is what we had seen on the internet but we were too taken in by the enormity of the structure to even get excited that we had finally seen it ! Should we even attempt to give adjectives to it it? Mind you, this is only supposed to be the base of the Gopuram, we do not know what was the planned size of the tower that was never built.

Why was this giant of a structure was left incomplete? Were the architects and the sculptors drained of their energy by the time the base was complete? Were there financial/political reasons? What could have happened that stopped the construction of this masterpiece? We would love to know the story behind it but unfortunately, we do not have any records, in fact, hardly anybody outside Tadipatri or the nearby districts even know about this temple. May be, some stories are better left incomplete !

You will probably have to spend half a day at the temple if you want to check out the figures on this gopuram alone ! Looks like the sculptors made up for simplicity of the main shrine by creating a riot of sculpture on these two gopurams. 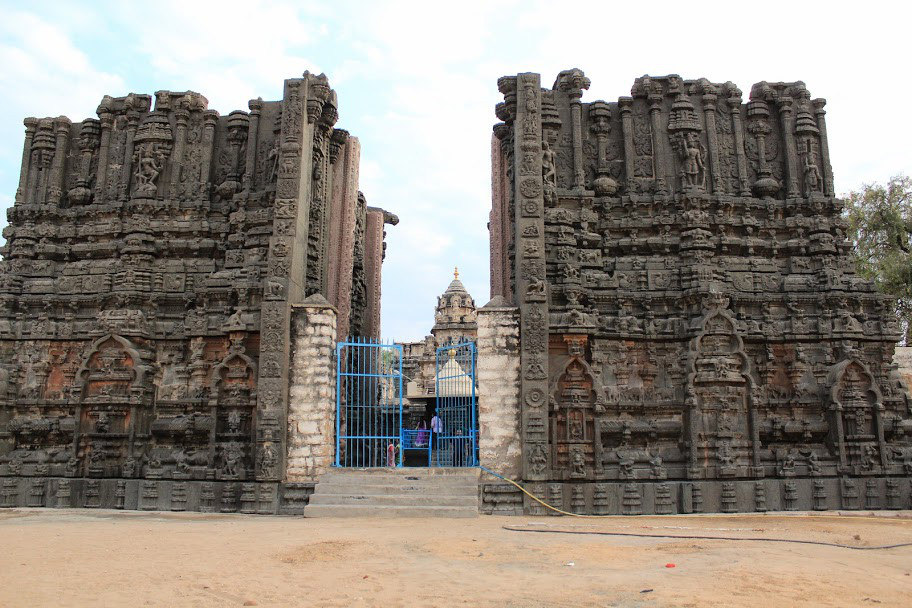 The North Gopuram opens out to the Penna river. This was probably meant to be the entrance for people visiting the temple from the river side. With the dry river bed on all sides, the Gopuram looks like a black mountain wall in the middle of a desert !

The black stone wouldn’t reflect any natural light and we had a tough time getting a good picture, either the gopuram would black out or the sky would become too white if we tried to adjust our camera settings ! The best thing to do was just stand and stare as if under magic, black magic ! We had to force ourselves to break out of its spell and wrap up our visit to the temple. Whether a lover of ancient architecture or not, do not miss visiting these little known but vast treasures of Rayalaseema.

Ever heard of crime zone?

It was past sun set by the time we left the temple and turned our wheels towards Gandikota, our next destination. The 77 kms drive to Gandikota gave us some jittery moments especially when we passed through Muddanar, the faction crime centre of Rayalaseema. We even found sign boards on the road warning us to be careful as we were entering a crime zone, we have seen “Accident prone zone” boards on highway but a “Crime prone area” sign was scary ! Being election time most cars were stopped for security and black money checks. We had to shell out some white money as fine for an expired pollution certificate !

As we reached Gandikota, driving on the deserted, eerie roads leading to the AP Tourism resort in the dark was an experience in itself. One of our cars totally lost their way and almost headed off towards a nearby reservoir, the others lost and found their way and all of us finally made it to the resort. The refreshing Haritha Resort and the piping hot, spicy and delicious dinner was the icing on the cake for a perfect tourist’s day !

– Tadipatri is an important town in Anantapur district and well connected by trains and buses from various centres in the state.

– The temples are located in the heart of the town and you could probably hire an auto rickshaw to go around if you do not have your own vehicle. It will probably take an hour or two to visit these temples, again that depends on how much of a sculpture and architecture lover you are.

– Food and accommodation is not a problem here.

– You could visit Belum Caves, Tadipatri and Gandikota in a day. We suggest a stay at Gandikota for a pleasant experience.