Adventures in the Konkan land – V- Sindhudurg Fort – Where Shivaji is the Lord !

In India, it is rather rare to see people celebrating a king who lived centuries ago, except in the history textbooks, we hardly ever remember any of them. The people of Maharashtra are an exception, it is heart warming to see how people still worship Chatrapati Shivaji and no where is it more evident than at Sindhudurg Fort in Malvan.

When we actually saw it the first time we reached Malvan, we thought it was some island in the distance, we realised it was the fort only when we zoomed in our camera lens.

Built by Shivaji in the 1600s, Sindhudurg Fort, stands on a small islet in the middle of the Arabian sea. The fort was built to guard the land frontier and even today there is a Coast Guard base near Sindhudurg.

To reach the fort, you have to take a 15 minute boat ride, sitting on those boat and venturing into the middle of the sea is an adventure in itself !

A temple for Shivaji

As you get off the boat and walk towards the fort, you cannot but wonder how they built such a big fort in the middle of the sea ! How could they transport the building materials needed to build a fort of such huge dimensions !

This mighty fort was once the guardian of the Arabian Sea. Strategically, it would have protected against sea faring enemies and would have been hard to capture a fort out there in the middle of the sea even if the enemy attacked from the land !

They say, from a distance, it is very difficult to find the entrance of the fort, unless you go very close to it. The entrance to the fort is a narrow opening between two fort walls. As you enter, the giant, black walls seem to look down on you, they still seem to be doing their duty of frightening a trespasser !

Today, there is not much left of the fort but the first thing that grabs your interest is the temple for Shivaji Maharaj, the only one of its kind in India.

In a country that easily builds temples for film heroes, this is probably the only temple in honour of a historical hero ! There is an idol of Shivaji inside. The priest asked all of us to pay attention as he narrated the history of the fort and temple but unfortunately for us, it was in Marathi/Konkani (we couldn’t understand which of the 2 languages were being spoken) and except for some information like “this is Shivaji Maharaj’s Temple”, “it was built in the 16th Century A.D by Shivaji”, we had to stare at the priest and nod our heads as if we understood everything ! To know about the fort, read the note on Maharastra Tourism website.

As we said, there isn’t much remaining of the fort except a few wells and a small temple for Lord Shiva. 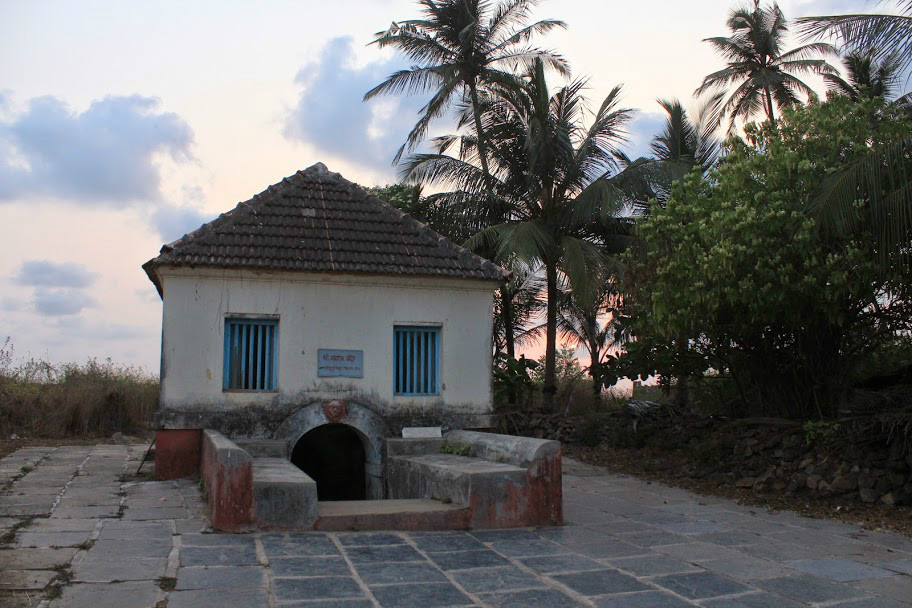 As you walk around, you will find some shops selling soft drinks, snacks and so on, there also seemed to be some people living still living inside the fort. Imagine, living in an ancient fort in the middle of sea, wonder how the nights are around here !

In one of the shops, we found a picture showing the aerial view of the entire Sindhudurg Fort. 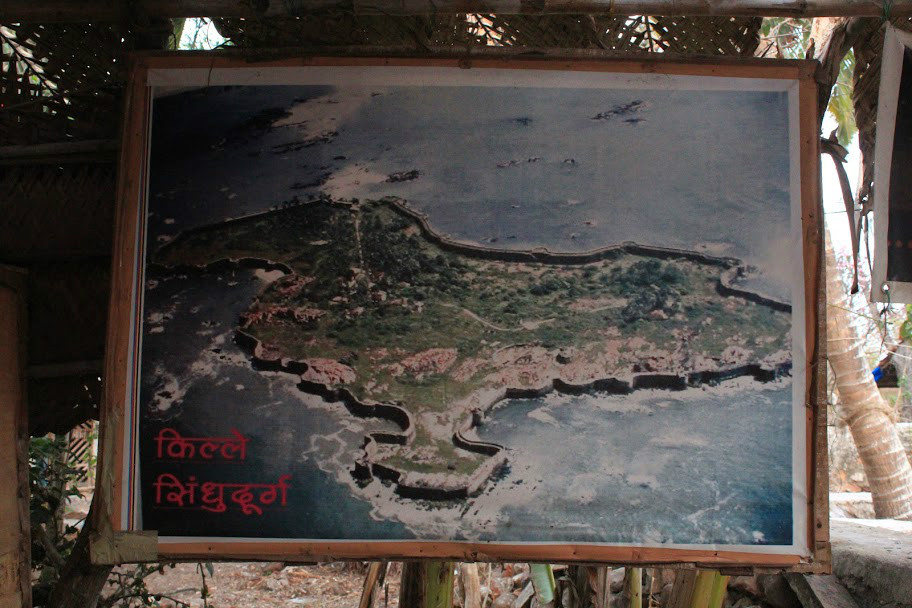 That should give you some idea about how far the fort walls extend ! A major portion of the fort’s boundary wall is still intact.

Further up, we found a watch tower overlooking the sea. A perfect spot to view the sunset. 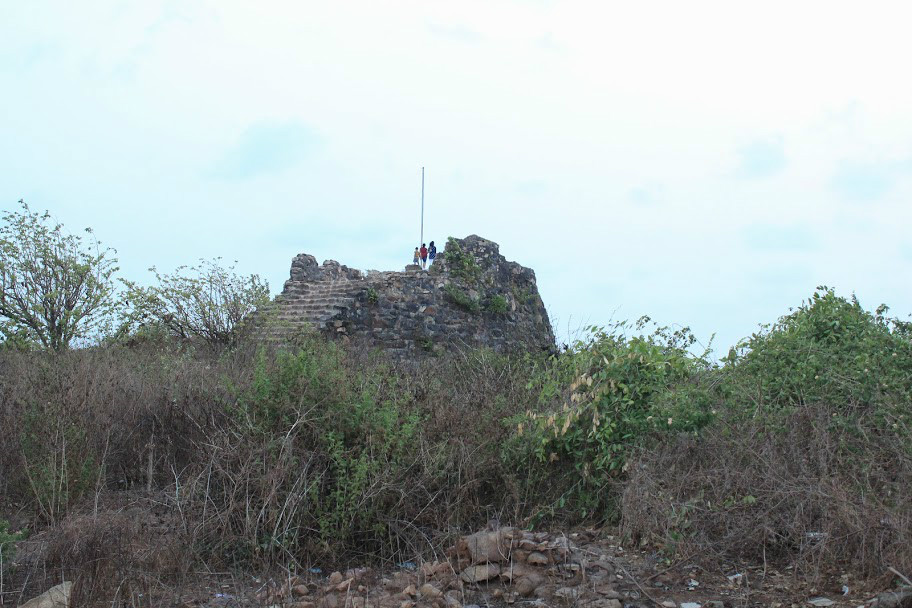 From there we could see the boundary walls stretching for miles around the islet. The sun began to set slowly, the lovely breeze of the open sea – your perfect evening of bliss !

The only regret was that we weren’t carrying a bigger lens with us and had to adjust with a normal one. As we always believe, no camera can catch the beauty and the dimensions of the human eye and mind.

It was getting dark and we had to leave the fort in time to catch the last boat for the day just after sunset. One cannot write enough about these architectural wonders. Building a mighty fort in the middle of the sea some 4 centuries ago, try beating it !

While waiting for the boat, we found some construction activity near the fort which included big trucks and huge cement mixers. 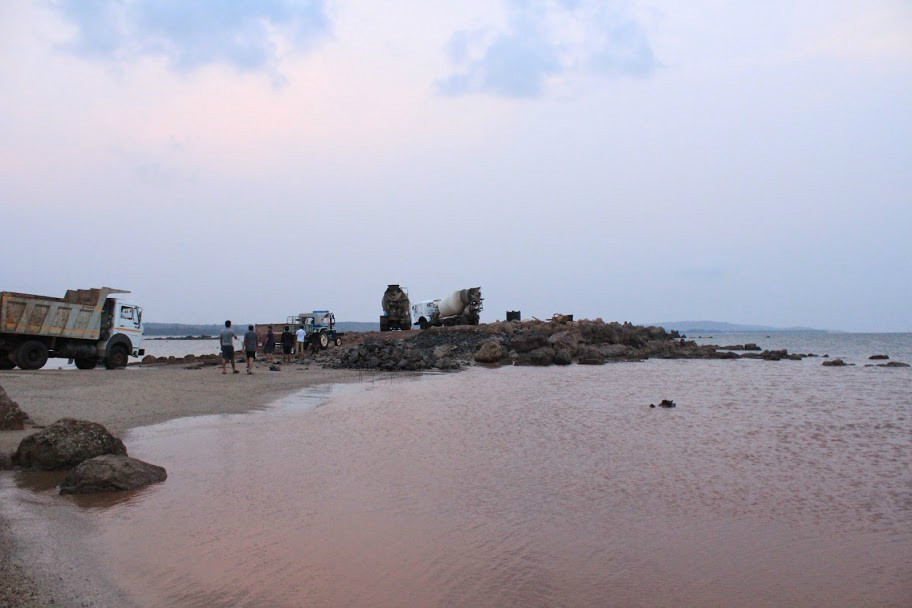 Earlier, we found some trucks being transported to the islet on rafts attached to steamer boats, these engineering and mechanical stuff is always interesting.

Our boat arrived as it was getting dark and we were asked to sit in the order instructed by those manning the boat because they told us, the tide was high, sea was rough and since it was getting dark, it would be difficult to spot and manoeuver over the under water rocks ! We knew this was going to be a bigger adventure than our Scuba diving experience !

The boat rocked rather roughly, at times it felt like we were going to be thrown off. Here and there, black rocks would be visible underwater and sometimes the bottom of the boat would scrape past the rocks, making people let out a collective scream !

In between all this, there were some beautiful views of the boats in the sea with their beacon light showing the way, under the cresent moon. We tried to capture the moment, if you find the picture slightly askew, well, you know why !

You can’t hold the camera still on a boat that is being tossed up, down, right, left in the middle of the Arabian Sea !

For all the fun and frolic and jokes on boat disasters, we have to admit, we were relieved when we reached the shore !

We headed straight to the Scuba diving organiser to collect out pictures and then to our resort. For a change, none of us was very hungry and we sat up watching the TV on the projector screen. We watched some movie trailers that made no sense, it was all about the “feel”, sitting under the coconut trees out in the open on the sea shore and watching something on a giant screen !

That was a day of Scuba Diving, boat riding in the dark, a day when some of us accomplished what we always wanted to do and some others pushed their limits to do what they never imagined they could !

– Sindhudurg Fort is open from 10 AM to around 5PM. The ticket cost Rs.50 per head and can be bought at the ticket counter from where you board your boat.

– Boats ply up and down from the shore to the fort. You are given about 1-2 hours time to finish you visit and come back for your boat. It usually doesn’t take more than that to visit the fort.

– Do not wander off too far and do not try stunts on the boundary walls, it could be a direct fall into the sea.

– The fort is already littered and not very well maintained. Do not add to the garbage !

– There is not much to see around here but visit it as it is one of the important sea forts in India and where you can find a temple for a king. If you can make it around sunset time, you will love the experience.

3 thoughts on “Adventures in the Konkan land – V- Sindhudurg Fort – Where Shivaji is the Lord !”