Independence weekend – I – Ryali – A temple for the mesmerising God(dess)

2014 has been a very kind year, almost every festival/holiday gave us a long weekend including the one for Independence Day. We had a wedding to attend in Tanuku and had grand plans of taking a couple of days off and travel but then work called, the wedding had to be missed and were “this” close to missing out on a trip. Thankfully, work wound up just before the long weekend and 5 of us set off on a 3 day trip to Rajamundry and places nearby.

Why Rajamundry? Because it is home, a perfect place for a long weekend trip from Hyderabad and there are still several places we haven’t explored around.

The original plan was drive down to Rajamundry but our trip was downsized to 3 days, so we made last minute train booking through Tatkal on the LTT-Kakinada Port Express. Getting the tickets through Tatkal was nothing short of a miracle considering the long weekend crowd between Secunderabad and Rajamundry ! 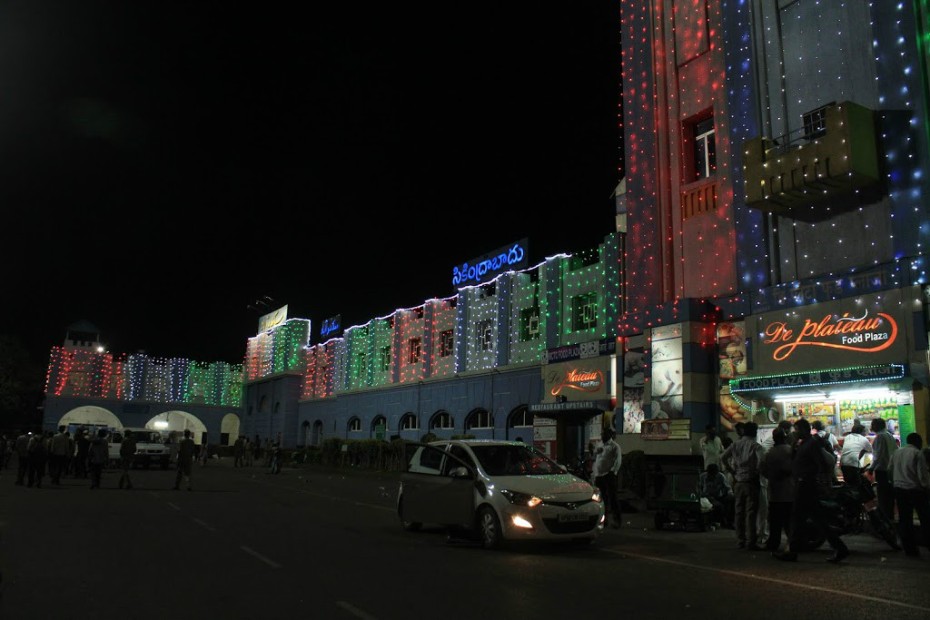 Our train was scheduled to arrive at 2 AM, it was fun roaming around the station past midnight – freedom to be ! A little after 2 AM our train arrived, we boarded the train and were off to sleep even before the train left Secunderabad ! The train wasn’t expected to reach Rajamundry before 11 AM, so we didn’t have to worry about setting alarms and wake up in time to get off at our destination.

It was close to lunch time when we reached Rajamundry, freshened up and sat down for lunch. A little siesta later, at 4 PM the 5 of us were off in our Alto to Ryali to visit the Jagan Mohini Kesava Swamy temple.

It’s the season for Pulasa !

A short drive from Rajamundry, you arrive at Dowleswaram Barrage, where Sir Arthur Cotton first harnessed a canal of Godavari. If there is one sight that overwhelms you always, it has to be the view of the Godavari from Dhavaleswaram (that’s how it should be spelt, Dowleswaram is probably the British version) ! When the river is full and red from the flood water, what a mighty river it is ! 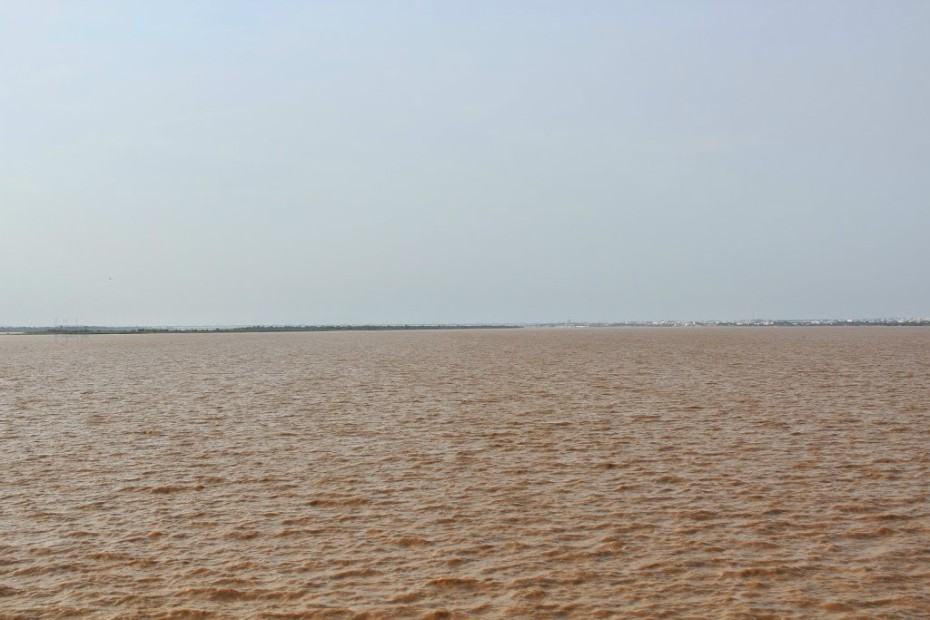 On a clear day, you can see the bridges over the Godavari at Rajamundry some 6 kms away. The Dowleswaram Barrage is over three branches of the Godavari, when you drive, you think you are crossing 3 barrages but technically, it is one huge barrage ! Here is a section of the barrage.

Ignore the bad road, stop your vehicle on the side and feel the river breeze and the bridge shiver as vehicles pass by, it will make you jump every single time !

The flood time is also the season for the famous “Pulasa” variety of fish. This sea fish swims all the way from the sea against the current and finds its way into the Godavari when the river is in flood. Exclusive to the Dowleswaram and nearby regions and found only during the flood, a kilogram of Pulasa costs around Rs.3000/- ! These fishermen must be busy trying to catch the Pulasa, a pricey catch indeed ! 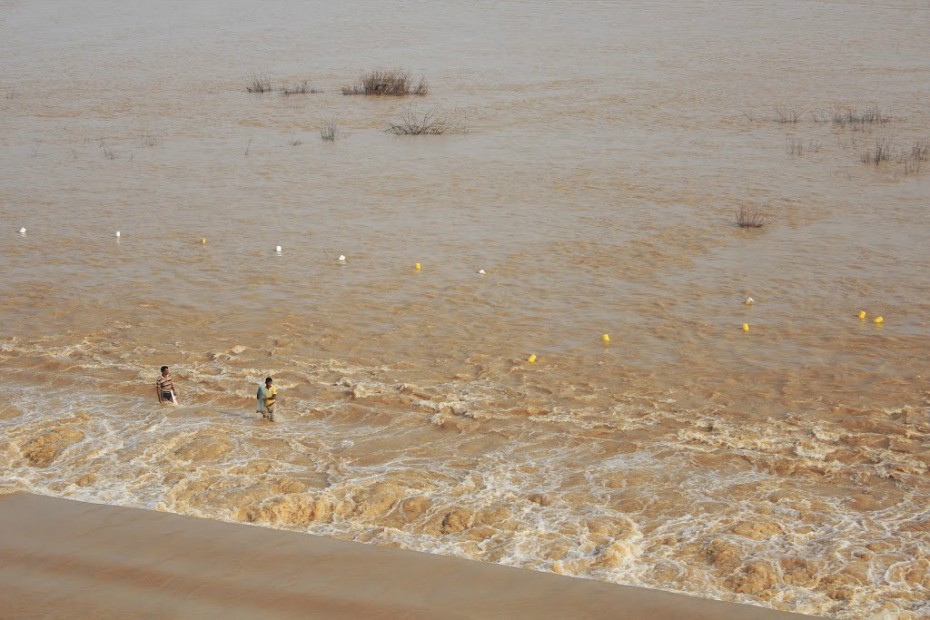 You can the find the freshly caught fish being sold on the roadside near Dowleswaram. If you ever get a chance to have a bite, consider yourself a royalty !

A Green rally to Ryali

Nestled in the greenery of Konaseema, is Ryali, a small village whose claim to fame is the ancient Sri Jaganmohini Kesava Swamy Temple. A trip to Ryali is not just about visiting the temple, the entire 40 kms drive from Rajamundry to Ryali is a visual treat ! 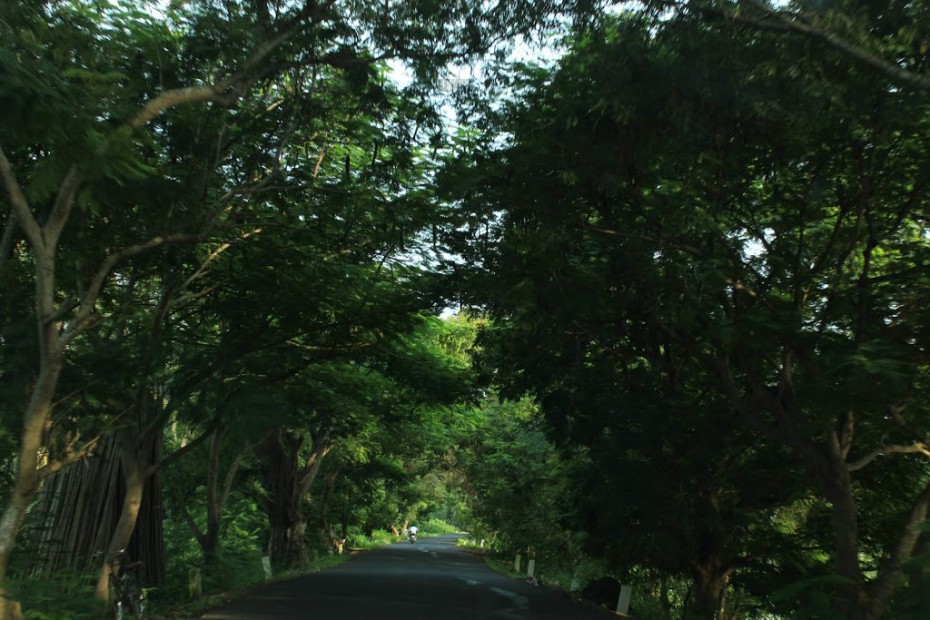 Greenery is synonymous with Konaseema and you will find some of the most beautiful sights you will ever see as green fields, banana plantations and coconut groves make it a sea of green. The roads are good and the drive scenic with canals of the Godavari running parallel to the road bordered by a line of greenest of green trees.

Though the drive time is not more than 40 minutes, you will definitely spend more than a hour on the road as you are compelled to stop and take pictures at every turn, that’s what we did and realised that it was already past 5.30 PM when we reached the temple at Ryali.

Built in 11th Century A.D during the Chola reign over this region, Sri Jaganmohini Kesava Swamy Temple is unique for the reason that it is probably the only temple for the Mohini avatar of Lord Vishnu where the idol has half male and half female form.

An interesting story from the Puranas  is associated with this temple. Lord Vishnu took the form of a beautiful damsel, Mohini avatar, during the churning of the Milky Ocean to distract the Asuras while the Devas finished up the Amrutha (nectar that grants immortality). It seems along with the Asuras, Lord Shiva too was smitten by Mohini and followed her. At Ryali, a flower fell from Mohini’s hair, the word “Raali” is the Telugu word for fall and the place gets its name from this legend. Lord Vishnu realising that Lord Shiva too was taken over by Mohini avatar, showed him his real form while retaining the female form at the back so that the Asuras did not realise the trick ! That is the secret behind the idol at Ryali ! True to the story, there is a Shiva temple built exactly opposite the Kesava Swamy Temple, to represent the place where he stopped after seeing Lord Vishnu’s real form.

The temple structure, as it stands today, was built in the 1980s, there are hardly any traces of its antiquity. 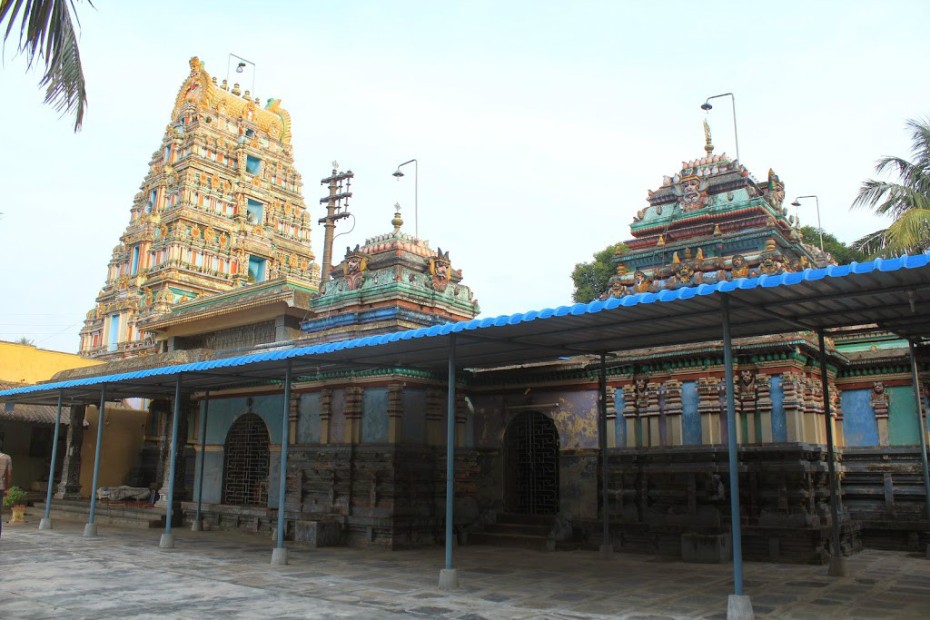 Even the Garbha Griha has been renovated with tiles. In the middle of the Garbha Griha, stands the idol of Jaganmohini Kesava Swamy. Made of Saligrama stone, this 1000 year old idol is a sculptural masterpiece. The front part of the idol has the form of Lord Vishnu and a panel surrounding it with sculpture of the Dasavataras along with his consorts and other celestial beings. But what leaves you speechless are the long nails of the idol. The priest shows you the nails under the light of the oil lamp and you will be stunned to see how life like they are. Though carved out of stone, they look like real long nails of a human. How the sculptors achieved this perfection 1000 years ago is beyond comprehension !

When you walk behind the idol in Pradakshina, you are shown the Mohini from. The idol has been sculpted  to look like a woman from behind with hair tied into a bun with a decorative hair pin, wearing a saree and anklets, even elegant shape of a woman has been sculpted ! The two forms have been blended skilfully. Man and woman are two sides of the same coin, the idol seems to be saying or is it “there is a woman behind a successful man”?

Remember to buy the Archana ticket if you want to go inside the sanctum sanctorum and view the idol in detail. The temple is open from 6 AM to 12 noon and around 4 PM to 8 PM.

Birthplace of the sweetest of sweets !

We left Ryali a little before sunset and drove back to Rajamundry. On the way, we passed by more green fields. This time we stopped and walked along the pathway bordering one the fields. People found the place a perfect setting for some profile photography, pictures were taken and uploaded on Facebook right away while this photographer were happy clicking pictures of Konaseema.

We also drove past a scenic little village called “Lolla”. There is a Lock here which navigates the water canals for irrigation. Known as the “Lolla Lock”, the place is a popular shooting location for Telugu films.

Driving through the Godavari districts fills your mind with some unknown joy, may be because nature here is always bountiful and joyous !

About 27 kms from Rajamundry on the way to Ryali, you will come across a village named Atreyapuram. This is considered birthplace of the popular sweet delicacy of Andhra Pradesh, “Pootharekulu”. The sweet is made of very thin sheets of rice flour dipped in sugar syrup, dried on inverted pots and folded into layers to look like folded paper, giving it the name “Paper sweet”. Pootharekulu, being high on sugar, are extremely sweet and it is difficult to eat more than one at a time, yet, they are the flagship delicacy of the Godavari region. Atreyapuram is where this sweet was developed. The sweets are prepared by the villagers in their homes and sold in the shops in their frontyard. All along the village road, you will find shops selling Pootharekulu.

There are different varieties of the sweet with fillings ranging from sugar, jaggery and dry fruits. We tried one with dry fruit filling. Pootharekulu are now available in every sweet store in Andhra Pradesh, some are exported to other cities and abroad too but buying them at the origin is an experience ! Do you want to take up the Paper Sweet Challenge and try more than one in a single go?

By the time we reached Rajamundry, it was dinner time. We couldn’t miss our favourite Rajamundry Bajjis but since it was late evening, there weren’t too many Bajji carts around. We had a few Bajjis and a mandatory glass of Rose Milk and then headed to River Bay resort on the banks of Godavari for some light dinner. The food was good but the usual pleasant ambience of the restaurant was missing, we even spotted a rat somewhere and decided the restaurant could be given a miss henceforth ! Sad, the resort and restaurant have a great view of the Godavari river.

We went home too sleepy and tired after our drive. On a day when India celebrated Independence Day, we drove through a region that abounds in wonderful legends, diverse culture and beautiful nature, a cross section of all that goes to make this country an incredible one !

“The content and pictures on this blog are owned by the authors of http://www.highwayonlyway.com and are not available for copying or reproducing elsewhere without any written consent from us.