A midsummer trip through Prakasam district

Keeping up our tradition of Mango shopping near Ulavapadu every Summer, we were off on another road trip to Nellore in June. This time the plan included a trip to Srisailam from Nellore, a route we had never explored before.

One of the best things that came out of the Telangana-AP bifurcation is that we now get an extra declared holiday ! The first birthday of Telangana fell on a Tuesday which meant 4 days off, if we could include the Monday in between and that’s exactly what we did. To celebrate TS Day, we decided to travel to AP !

Saturday morning saw us driving to Nellore. Breakfast at Organic Village, Choutuppal has now became a must do these days. From there we were pretty much on cruise mode, passing through Nalgonda, Miryalaguda. The only time we slowed down was to take a quick picture of Krishna River with some flowing water close to the TS-AP border near Damarcherla. 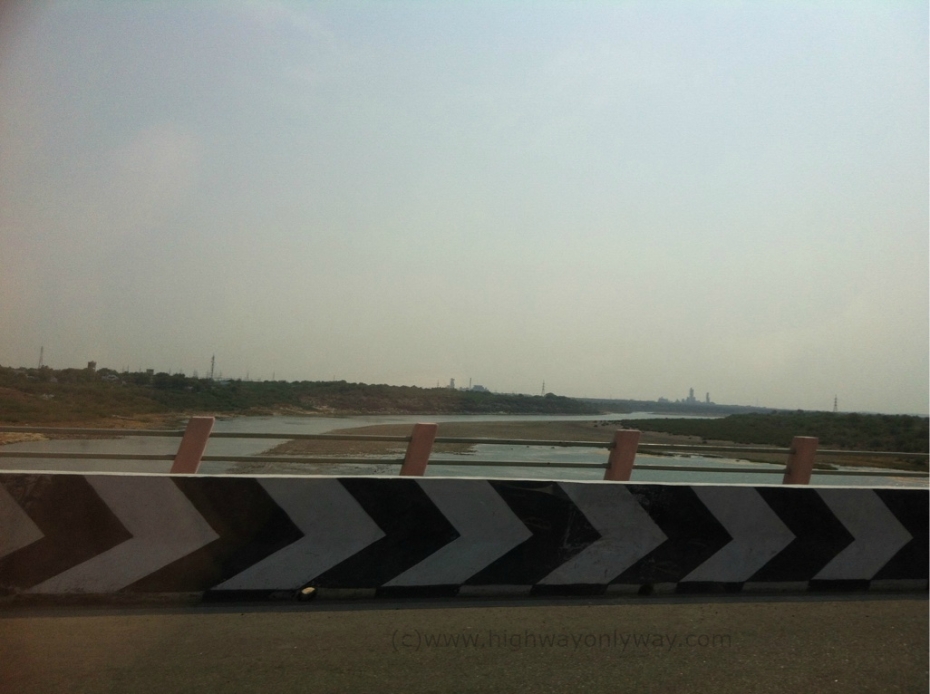 It was surprising to find some flowing water in the river despite the peak Summer. In the background, you can spot the cement factories that dominate the skyline of the Miryalaguda-Damarcherla-Dachepalli stretch.

If you read our previous post, you would know the important research work that we undertook during this journey !

After our mandatory pit stop at Hi5 restaurant, Ongole, our journey slowed down a bit because we spent about 45 minutes mango shopping at Ulavapadu !

With a boot load of mangoes (20kgs !), we reached home in Nellore by lunch time. We chilled at home the next 2 days, for that time of the year, Nellore was refreshingly pleasant.

On TS Day, we began our trip from Nellore to Srisailam, with our parents in tow. Our drive took us through the length of Prakasam district, a first for us because we never ventured beyond Ongole. With breakfast at Ghar Dhaba near Kavali and stopping by at Ulavapadu for another round of mango shopping, this time to take a full load back to Hyderabad, we headed towards the Markapur. It was fun to sit in the back seat while the head of the family took the steering, no matter how old you are, it is a great feeling to be driven around by your dad !

After Ongole, we left the NH5 and turned onto Ongole-Kurnool road, passing through the dry lands of Prakasam district. A few towns popped up here and there, the main among them being Chimakurthy, famous for the granite mines. You can see the massive granite mines right next to the highway. Wonder how those granite mines were formed? Considering that Granite is an igneous rock, were there volcanic explosions in these regions millions of years ago? Most hills seemed to have been blasted out for the granite. Does the planet belong to us or do we belong to the planet? A never ending question.

The dryness of the land and the rocky granite hills added up to the heat, leaving us sweating and drained – just the right kind of Summer !

Along the highway, you can also see slate making industries, it looked like a cottage industry of Chimakurthy, we found people making slates close to their homes. In some places even the houses were made out of the slate slabs !

The roads on this route varied from good to decent to bad, mostly the journey progressed at around 60-70kmph. It was around 11 AM when we were close to Markapur, the biggest town in this region after Ongole. As we reached Markapur, we realised that there was supposed to be a popular temple in the town, a quick check on the internet told us about the Markapur Chennakesava Swamy Temple, we decided we had to stop and visit the temple.

The Chennakesava Swamy Temple was built during the reign of Sri Krishnadevaraya in the early 1500s A.D. You can see the temple even before you enter the town, it’s 135 feet Galigopuram is probably the tallest structure in the entire Prakasam district, a 500 year old skyscraper !

Reaching the temple is not as easy as viewing it from a distance. You will first have to negotiate maze like narrow bye-lanes and then succeed in finding a parking space in the busy market place that surrounds the temple. We were on the verge of giving up our idea of visiting the temple because finding a place to park the car seemed impossible but managed to find a place in the middle of the lane, a few other vehicles were parked there, that looked like the norm in the market !

The clutter and noise of the road is forgotten once you step inside the temple. The Chennakesava Swamy Temple, like most temples has been renovated to look like a recent one, even the Gopuram has been painted to give it a fresh look. We were a tad disappointed that there was nothing left in the temple to tell tales of its history but as we went close to the Garbhalaya, it’s antiquity was evident in the huge, ornate pillars, signature style of the Vijayanagar architecture. All it takes are a few breathtaking pillars in their style and you are left amazed at their sculptural expertise.

Wonder why Sri Krishanadevaraya chose a far off place like Markapuram to build a temple. Was the place once an important trade/culture centre? We tried asking the priest about the history of the temple and it’s significance and he simply pointed towards some ancient Telugu inscriptions on the wall, which, obviously we could not read !

After a short darshan of Lord Chennakesava, we spent about 15 mins in the temple, the burning hot ground and walking barefoot on the stone slabs under the noon sun meant we had to run ! Getting the car out of the narrow road with traffic blocked on all sides was another daunting task. At the end of it when we were back on the road, we were glad that we could make a visit to the historic temple.

Say “once more” to Srisailam !

From Markapur, the next town on this route is Dornala. It was lunch time when we reached Dornala. We had read that AP Tourism had a resort at Dornala and decided to check it out but we reached there only to find a deserted resort and chased away by monkeys ! Thankfully, there are a few small hotels in Dornala and we stopped at one of them for a hot Andhra meal.

The ghat road to Srisailam begins from Dornala. It is always to pleasure driving on the forest ghat roads but we missed the dense forest and amazing views of the Nallamala hills and Srisailam Dam on the Hyderabad-Srisailam ghat road. On this route, the ghat road is about 50 kms but as compared to the Hyderabad route, this has more hair-pin bends.

We reached Srisailam around 3 PM, checked into our room and then headed for the Harathi Darshan at 5.30 PM. Our experience of the mystical harathi was dampened by an unruly crowd who refused to give space for others to view the event, the same old attitude of our people, “me first, all for me” ! When you believe God is omnipresent, it doesn’t matter whether you get to see the harathi or not. The Sparsa darshan followed and we left the temple with contentment, the sole purpose of visiting a religious place, to feel thankful and content for what you have in life.

We started back to Hyderabad the following morning. The Hyderabad-Srisailam route is under road widening process for most part starting from Dindi, so for the next 6 months atleast, the drive may not be a very smooth one. Inspite of that we covered the distance in about 4 hours to reach office in time directly from the highway !

Not many places were covered in this trip, but we got to drive through a part of AP that we had not seen before. Sometimes more than the places you visit, it is the journey and the experiences that matter.

– Markapur is well connected by road from most important towns in the region like Nellore, Ongole, Kurnool, Nandyal and Srisailam.

– If you are interested in touring Prakasam District, in addition to the Chennakesava Swamy Temple, you could check out Bhairavakona, Lakshmi Narasimha Swamy Temple at Singarayakonda, Chirala Beach resorts, Tripurantakam Temple, considered the Eastern Gateway to Srisailam. You could cover all these in a weekend from Hyderabad or Chennai.