Getaway to Godavari – I – Hyderabad to Rajamahendri on a rainy evening

It was on a whim that we decided to make a weekend trip to Rajamundry in the second week of June and visit family. There wasn’t much of a plan except to drive around the Konaseema region. We started on a Friday afternoon from Hyderabad, it was a pleasant day in Hyderabad as we cruised on the now totally familiar NH65. We had to have our mandatory coffee break at Highway 7, Suryapet and then we were on course to Vijayawada.

Anybody who is familiar with the climate of Vijayawada – the hot, sultry, stuffy, sticky, burning climate, would not believe these pictures ! As we were nearing Paritala, heavy rain clouds covered up the sky and in the distance, they descended on the Kondapalli hills, such breathtaking beauty that you had to brake right away and click pictures ! 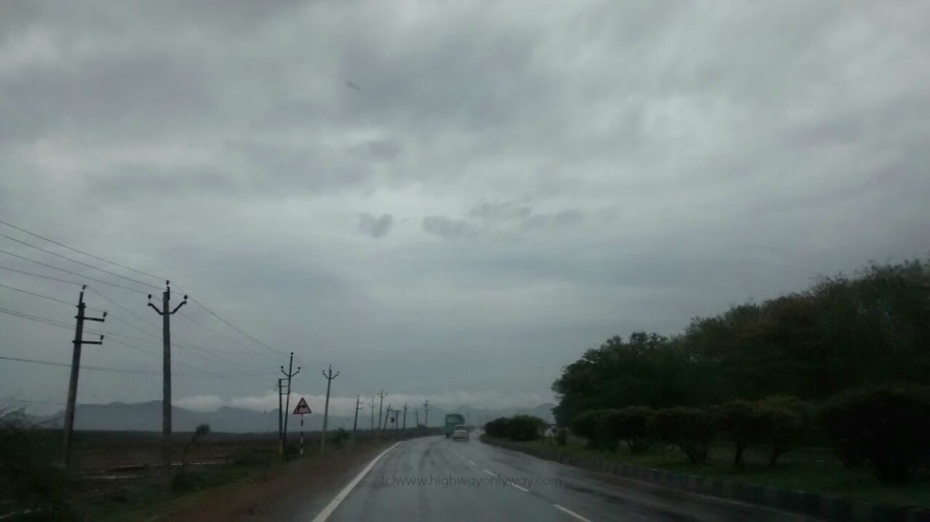 We had never seen such scenes in this part of the country, forget all the popular hill stations, it looked like NH9 near Vijayawada was the place to be at that day !

If not for this board, you wouldn’t believe you were close to Vijayawada but, all you had to do was roll down the glass and you could feel the humidity and the warm weather. Well, somethings never change and perhaps, should not !

There are some moments when you stop and really feel like something divine is happening around you, this was one such moment.

A rude jolt back to reality !

Lost in the lovely weather we sailed through our drive to Vijayawada. On the outskirts, we decided to take the alternate route via Auto Nagar to avoid the heavy traffic of Vijayawada city. We were following Google Maps not to miss the turning towards Auto Nagar. We didn’t miss the turning but some autorickshaw guy missed his driving sense and tried to sneak in between a few stationary vehicles, we managed to evade the auto only to be hit by a lorry behind, a loud “thud” to bring us back from the beauty that our eyes had got used to !

A survey of the damage showed that, luckily, there was no correlation between the sound and the damage. When we heard the sound, we had expected a huge dent on the passenger side on the right but thankfully, though it had been scraped badly, the dent was not ugly.

The lorry driver was surprisingly polite and we were in no mood to pick up a fight and let things be. We resumed our journey, turning to discussions on Butterfly effect, like how that extra 30 seconds of photography could have had an impact on the timing of the incident ! And, thank God for insurance, we could dump our worries on it and drive ahead.

Non-stop to Rajamundry in non-stop rain

Throughout our journey, we got calls from home back in Rajamundry asking us about the weather. It was raining heavily there and they, naturally, got worried about our driving in the rain after dark. They even started admonishing us for making sudden plans when the weather was not right. We tried to reassure them that all was fine and that there was not a drop of rain.

The reality was, the moment we reached Tanuku, 2 hours from Vijayawada, it started raining like the clouds wanted to dump the entire year’s rain in one day in one place ! It was a slightly scary drive with rain lashing outside, we could barely see what was before us. The rain reached frightening levels the closer we got to Rajamundry. At Ravulapalem, driving across the bridge over the Godavari River, was a real adventure ! It was pitch dark except for the lights of the vehicles, raining like buckets were being emptied from above, water had stagnated on the bridge and the feeling of a mighty, swollen river flowing below ! As the car zoomed, the water on the bridge splashed around like the sparks from a Diwali Flower Pot ! Here is a short video of how it felt driving on the bridge that night.

The usually 2.5 hours drive between Vijayawada and Rajamundry took close to 4 hours, it got worse when we reached Rajamundry with the rain not relenting and the roads leading to city flooded. We had a tough time navigating through the roads and finally made it home past midnight, not before struggling to hold our umbrella right outside our apartment because it was raining heavily and the watchman could not even hear us over the sound of the rain !

The rain did not seem to take a break when we went to bed at 1AM. This journey will be added to our list of unforgettable highway adventures.