Celebrating Kongu Nadu – I – Palani – A tale of two hills

If you are a travel enthusiast, anything could be an excuse to travel and a friend’s wedding is one huge excuse ! Ever since our very close friend announced her wedding to be held in Palani in October, serious travel plans started some 5 months before the date ! A family function in hometown Nellore was to follow the wedding in Palani and a 10 day long vacation was duly planned during the Navratri season.

Our more than 1,00,000 kms old Figo was given a rest this time 1. because we had done the same route in December last year, 2. the tyres were already worn out at 70,000 kms and we did not want to risk another long road trip and 3. we would save more time if we travelled at night and we are staunch believers of day time travel. Considering these points, we decided to make it a bus and train trip.

NH44 through the eyes of a Volvo

A lot of people, including this writer, are skeptical about a bus journey, sitting, sleeping and washrooms are major concerns. However, these days, with great roads and multi-axle buses, these journeys have become a lot easier or as this writer discovered, very comfortable !

We started from Hitech City on a Friday evening direct from work, it was only a few minutes before we hit the ORR and from the vantage point of the Volvo bus, ORR looked gorgeous ! We found it very amusing when we were shoulder to shoulder with lorries or could look down upon cars, it was a fun experience.

What’s a bus journey without movies, promptly “Race Gurram” was played, followed by a an hour of “Papanasanam” before it was dinner time near Gooty. For those worried about washroom breaks, the bus stopped every 2 hours for such breaks. It took us only about 15 minutes after the dinner break to doze off and we did not wake up until 4 AM when the bus stopped somewhere near Salem. We woke up 2 hours later as we were nearing Dindigul to click this view of NH7.

What’s special about this picture? Nothing, you don’t get this view when you travel by a car !

We alighted at Dindigul and from the suave Volvo we took a ride to Palani on a rattling TN state transport bus, don’t go by the rattling sounds, these buses can do great speeds !

Back in Lord Muruga’s court

Less than a year from our last trip, we were back in Palani, this time to take part in the wedding festivities, so there were no elaborate sight seeing plans.

It also turned out to be an absolutely delicious trip, from the time we landed at our friend’s place, we were treated to the best of wedding feasts at every meal time ! After some fun and frolic, typical of Indian weddings, it was time to present ourselves before Lord Muruga.

This time, instead of taking the Winch or the Ropeway, we decided to climb the Palani Hill by foot. There are 2 routes to climb up the hill, the regular one has a lot of steps and is quite a steep climb, the other route called the “Yanai Padhai”(Elephant Path), is an easier one. It also gave us some pretty views of Palani town at dusk.

It took us about 20 minutes to reach the hilltop. The darshan via special entry ticket took us another 30 minutes. We offered our prayers to Lord Muruga, the Gyana Pazham or the Divine personification of Wisdom asking him to fill us with wisdom but we could see the Lord smiling, we are sure he thinks we are beyond any hope !

As we began to climb down the hill, the lights of Palani twinkled below us, it was like a star studded sky descended down the hill ! We practised some night photography and here is one of our decent attempts. 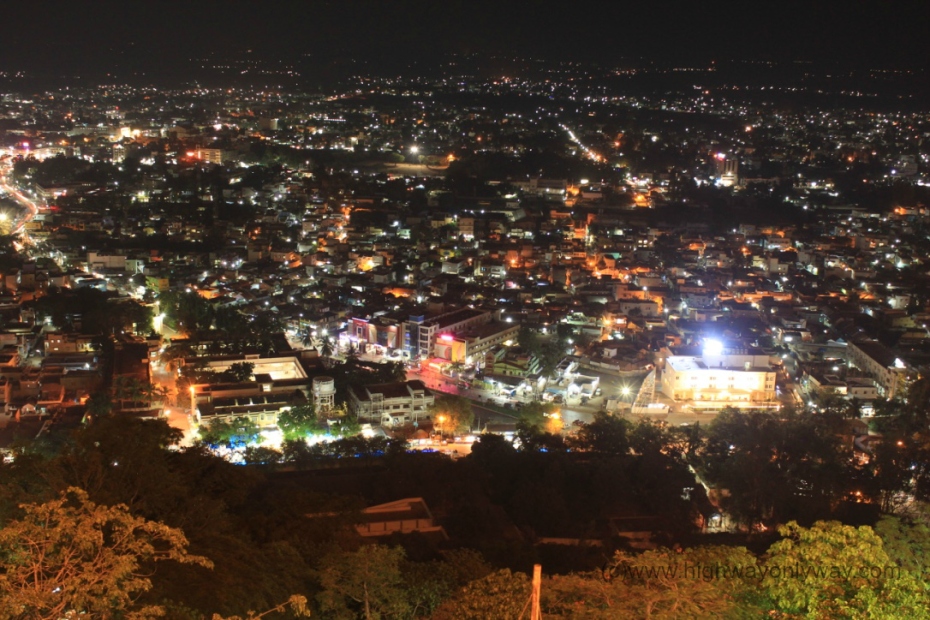 We climbed down the hill and headed straight to the market area for a cup of piping hot Sukku Coffee (Dry Ginger Coffee) and then for dinner at Hotel Nalapakam at the New Tirupur Lodge. The Dosas, Parottas and Kuzhi Paniyarams made our day !

The Demon who moved hills

Opposite the Palani hill, there is another similar looking hill. We did not see it during our last visit but spotted it this time from the terrace of our friend’s home. That’s when we heard Idumban’s story.

Idumban was a demon who became a devotee of Lord Muruga. He was was also a disciple of Sage Agastya. So when Sage Agastya wanted to transport two hills from Kailash down to the South, he asked Idumban to carry the hills. He tied both the hills to a “Kavadi” and carried it across his shoulders. When he reached Palani, he placed the hills on the ground to take some rest and realised he couldn’t move them. He Spotted a young ascetic boy on one of the hills, who refused to vacate, Idumban fought a battle with him where the former was killed. The boy turned out to be Lord Muruga who had given up his abode in Kailash after the Fruit of Wisdom incident. Idumban was brought back to life for his devotion to Lord Muruga and the two hills he was carrying have come to be known as “Skandagiri” and “Shaktigiri”. Palani temple is located on the Skandagiri hill. Exactly opposite the Palani hill is the Shaktigiri, with a temple dedicated to Idumban.

The tradition of carrying of Kavadi during important festivals dedicated to Lord Muruga evolved from this story of Idumban.

On the second day of our stay in Palani, we made a short visit to the Idumban temple, early in the morning.

The temple located on Shaktigiri, can be reached only on foot, there are some 500 odd steps to the top. 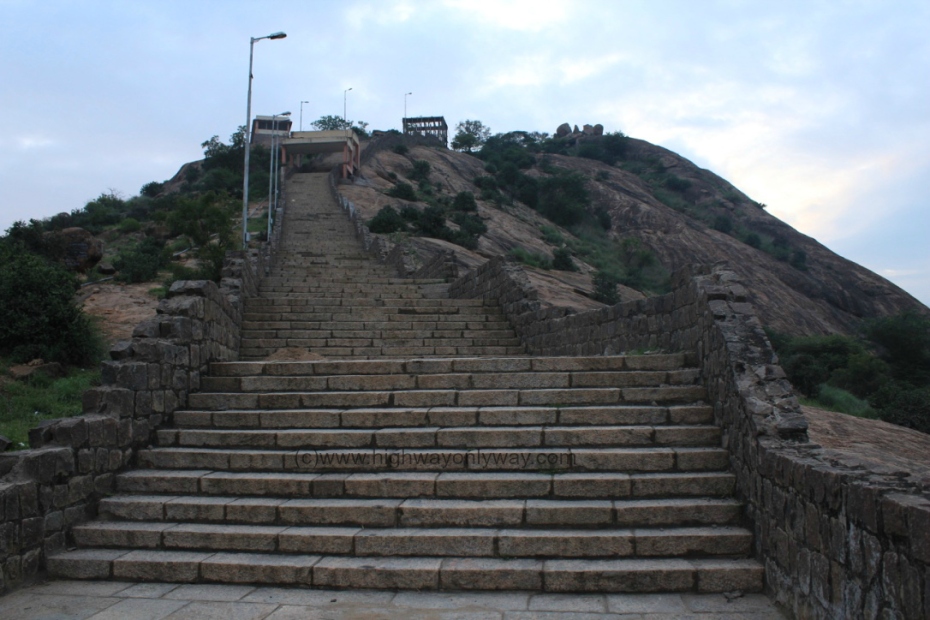 We were told it would be a very difficult, steep climb but it turned out to be a decent one, we puffed and huffed for sure but it was not as bad as people scared us ! Enroute, we were also treated to some early morning pleasant views of Palani and the Kodaikanal hills in the distance. 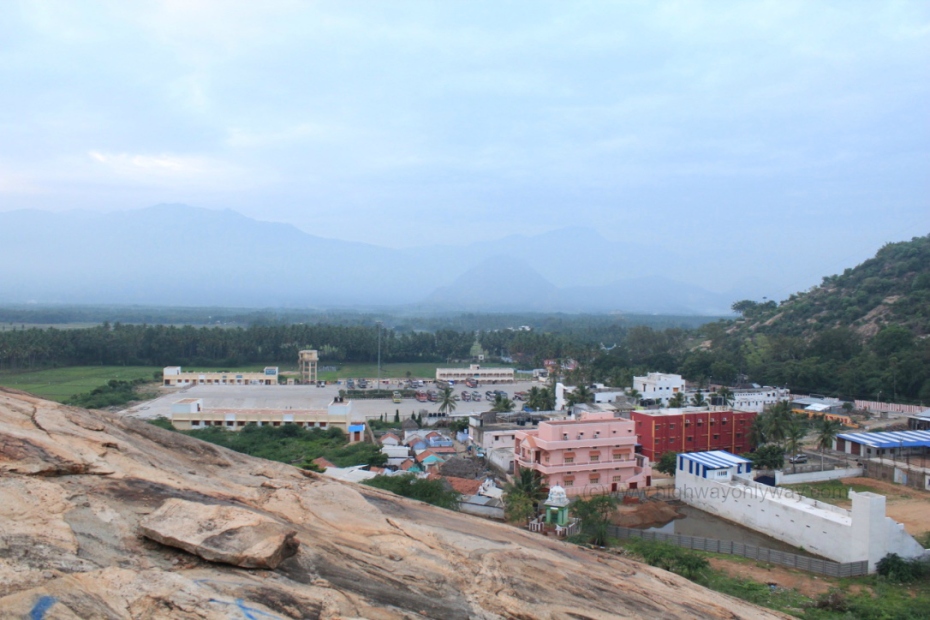 Exactly opposite the Idumban temple hill is the Palanimalai, the abode of Lord Muruga. The two hills of Palani seem to abruptly jut out from a flat land. May be Idumban really did place the two hills there !

Idumban temple is located on the hilltop, it is a small shrine, basically and at 7 AM, the temple was still closed and there was nobody around. The sun had just risen and was lighting up the Palani landscape.

Ever wondered why nature appeals to the human mind so much?

We sat on the boundary wall overlooking the landscape, taking in the morning freshness and cool breeze, for a moment we forgot we were in Palani to attend a wedding, it was like we were in some far off blissful land.

We spent about half an hour soaking in some early morning Vitamin D and the refreshing scenes. People started arriving soon and we decided it was time to head back to the wedding festivities. The temple was still not open, so we had to give it a miss. We tried taking a picture of the temple from outside but an angry looking dog lurked around us and we weren’t going to take a chance by standing there.

As we climbed down, we could see the Palani temple abuzz with devotees and rope cars busy with their up and down shuttle. 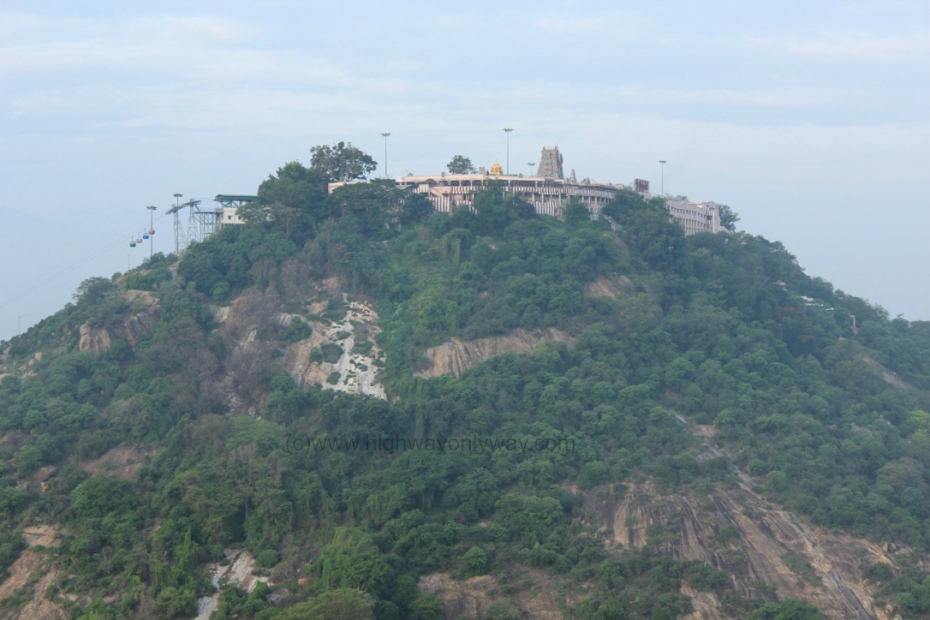 We reached the wedding hall in time for the wedding ceremonies. The wedding itself was like a culture tour as we witnessed some interesting traditions, like the temple elephant of the Thiru Avinankudi Temple being called upon to garland and bless the bride and the groom. We were told, in the past, the groom would arrive at the wedding hall riding on an elephant !

As for the wedding feasts, our cleanly wiped off banana leaves at the end of every meal would tell you how much we binged, unbelievably delicious food. For 2 days straight, we were in gastronomic heaven.

Our Palani trip wound up after the wedding and we headed to our next destination, Coimbatore.