The best way to celebrate India’s Republic Day, according to our people, is to travel and discover a part of India that is little known. That could also go down as Excuse # 287 to travel ! Holidays falling on weekdays are a quick way to refresh and wanting to make the most of it, we planned a day trip to Chandrampalli Dam, 130 odd kms from Hyderabad. The plan also included cooking in the wild. We had read about the place on the internet and it was on our list for a long time.

Our trip was scheduled to start at 6 AM but as it happens always in Hyderabad, by the time we hit the road it was 7.30 AM. The journey was further delayed when we stopped for breakfast at our regular Dosa cart on the Chilkur road. By the time we paid the bill, the cashier lost count of the number of dosas we had ! It was almost 9 AM when we finally began the journey. Since it was supposed to be relaxing drive, we had short breaks for tea and catching up every now and then.

A few kilometres after we crossed into Karnataka we were in a familiar situation – pathetic roads ! The 12 kilometers to Chincholi that you see in the above picture took us almost an hour. By the time we reached our destination, Chandrampalli Dam, it was past 12 noon.

The Dam is located in the village of Chandrampalli but when we reached the village, we could neither find the dam nor the river ! We had read on the internet about the Gottam Gutta forest area behind the Dam site where people could go for a trek, camping and so on. All we could see was a gate with a road beyond leading somewhere and a hill with some building on top of it. It was very hot, dry and we were hungry already, the dosas we had felt like the distant past !

What troubled us was that it was already lunch time and we had grand plans of searching for firewood and cook our lunch in the wild, we had no clue where to start and how long it would take. As the heat began to get to us and most of us were losing our cool, we spotted a villager, who was amused at our plight and gave us directions to the dam site and pointed us to a spot where we could set up our open kitchen. He told us picnicking was a regular thing at the place.

As advised, we drove to a spot which was the back side of the Dam and much to our surprise, there was already a group busy cooking biriyani ! We parked our cars and went scouting for a nice spot. Unfortunately, where people tread, they are sure to leave their trail of litter ! There was not a single spot without plastic covers, bottles and trash. The less we talk about our civic sense, the better. It was hard to find a litter free space and not wanting to waste time, we decided to get going.

Soon, the utensils were brought out and people got busy, some collecting twigs and branches for the fire, some finding stones to set up the stove, some cutting the vegetables, the chefs were busy issuing the orders. After about half an hour of smoke, watery eyes and bouts of cough, the fire was lit and the cooking session began.

Here is our Aloo Kurma getting ready !

For those who love their chicken !

To make things easy, we had done the ground work before starting on the trip, the masalas and other ingredients were made at home. We had a bit of chasing to do for the chicken because the person who was supposed to buy and marinate the chicken had forgotten it and being a National Holiday most meat shops were closed in almost every town ! They bought some Paneer as a back up but finally found a shop selling chicken !

While the cooking was in progress, inspired by the spirit of Swachch Bharat, we decided to stop cribbing about the litter and got about cleaning up the place. We picked the litter as much as we could and almost burnt down the place when we accidentally dumped a burning leaf in the trash cover !

What’s on the menu? Aloo Kurma, Chicken Kurma, Pachi Pulusu and rice. Pachi Pulusu is a traditional dish of Rayalaseema which does not involve cooking as such. It is made of tamarind pulp, roasted dry red chillies and raw onions, mix all the items, pour some water and add salt, your fiery dish is ready. Remember, it is not for the sweet hearted, the spice will set you on fire ! The dish was mostly made by cowherds when they took their cattle for grazing into the dense forests of Nallamala. The cattle would go grazing for about 6 months when it was off peak season for agriculture, the cowherds would carry minimal rations and this dish was easy to make in the wild. Back in this writer’s childhood, watching the cattle return home from their grazing after 6 months was nothing less than a spectacle ! Pachi Pulusu was included in our menu as a tribute to those cowherds and the memory of a bygone era.

While it took 2 hours for the cooking, the food was wiped out in less than 20 minutes ! who would not enjoy a hot, spicy meal prepared by oneself? We shared some of it with a villager who was passing by, he told us he would feed his family.

Lunch done, we cleaned up after us and before anybody was tempted to take a nap, we decided to explore the dam.

The River Bhima is an important tributary of the Krishna River and the Chandrampalli Dam has been built to provide irrigation along the Telangana-Karnataka border.

To reach the dam, one has to scale this steep wall of the bund. There are steps leading to the top but some people like this writer’s friends choose the difficult, steep, rocky path because “what’s the fun in going the easy way?”

The scene gets amazing when you reach the top, the Bhima river makes a sudden appearance. From the other side of the bund, you wouldn’t believe that a scene like this exists beyond the dam wall.

The Chandrampalli Dam is situated between two hillocks and is almost lost between the surrounding hills, it looks like a little child shying in a corner ! 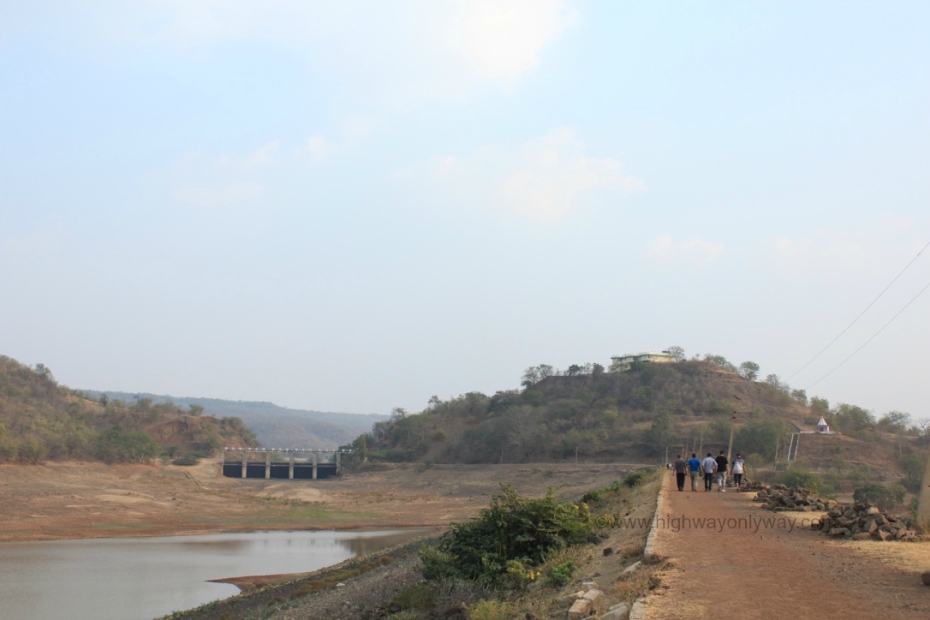 Winter was just ending, so the hills were mostly dry but the greenery post monsoon should be a feast for the eyes. There is a forest area around the hills called the Gottam Gutta and is slowly becoming a trekking/camping getaway for Hyderabadis.

We then began climbing down the bund to the river bed. The trek is entirely on a rock strewn path but no worries, it is an easy one. You just need to make sure you don’t step on a slippery rock and twist your ankle ! 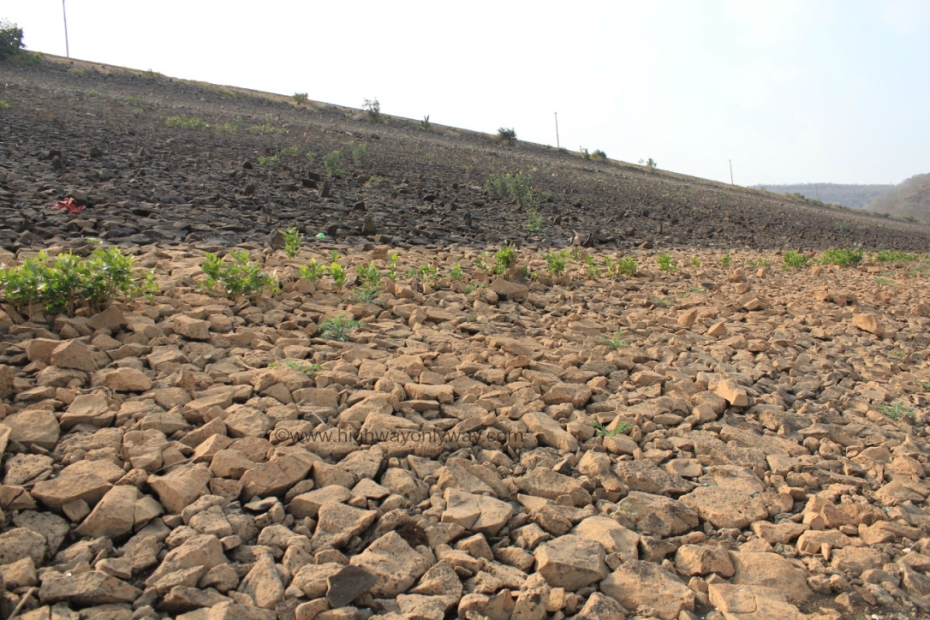 We suppose, peak monsoon season, the water could rise up to this level because we could see some plants and weeds growing on the bed.

Once you reach the river, you can spend some pleasant time, putting your feet in the cold water and savouring the beautiful landscape of the river flowing between the hills.

Imagine these sights after the rains, when the greenery is at its peak !

We chilled on the river bank, taking the peace, calmness and silence of the place. We didn’t realise it was almost 4.30 PM, it was time to wind up and head back. Not wanting to leave so soon, we took a long walk along the river bank and climbed back at the far end of the bund and again walked along the dam wall. We wished we had some more time to explore the forest area beyond the dam.

This time, we took the steps instead of the rough path and managed to click this picture which we call “the stairway to nowhere” !

By the time we walked back to our cars, our feet were aching so much that it felt like they would simply throw out the shoes by themselves ! If you want to know what heaven feels like, remove your shoes after a tiring trek and feel your feet exhale in relief !

A relaxing cup of tea at a nearby tea stall later, we were good to go home. The pathetic roads didn’t seem to matter on the return journey as A.R.Rahman’s immortal hits kept us company through the 3 hour drive.

Enroute at Tandur, we spotted the cement factory belonging to India Cements in the distance. As an intern at India Cements way back in 2000, this writer would proof read Annual Reports and the cement factory at Tandur would figure in every Report. Imagine a decade ago you wondered where this Tandur was and then one fine day, you pass through the same town and see the factory that you read about, it was some kind of an emotional moment !

One more tea break at Anantagiri and then we were home. Nobody was in a mood for dinner, the culinary and visual delights by the Bhima River lingered on.

2 thoughts on “Chandrampalli Dam – Culinary delights by the Bhima River”