It was one of those weekdays in February when we were desperate for a break (looks like 15 days is the maximum we can go without a getaway break !), since we could not take leave, we were looking for weekend options when serendipitiously, we came across a cultural event being held in Kuchipudi, the birth place of Kuchipudi dance. The week long event was to promote the waning Kuchipudi Yakshaganam, the traditional Kuchipudi dance drama and we found the perfect excuse for a weekend trip.

As always we turned to the God of internet, Google, who showed us the path we could take in search of travel destinations. We discovered that within a radius of 60-70 kms from Vijayawada, there is a heritage treasure trove and so we set off on a 2 day trip to the Krishna Delta, tracing our path right to the point where River Krishna meets the sea.

Starting from Hyderabad at 5 AM, we reached Suryapet for our customary break at Highway 7 restaurant. It being the wedding season, the resto was teeming with people but nothing could stop us from our dose of Idly, Vada and Pongal, especially after having dreamt about it for a greater part of the week !

Breakfast done, our plan was to first visit the Srikakulandhra Mahavishnu Temple, 43 kms from Vijayawada. We were doing alright till we reached Vijayawada. The moment we entered the city, there was chaos, diversions, traffic jams, crowd, noise and dust ! Over the last 2 years, passing through Vijayawada has become a hassle, taking up almost an hour of the journey time. Brace yourself for more because this is soon going to become the capital region of Andhra Pradesh !

By the time we crossed Vijayawada, it was almost 11 AM, the Srikakulandhra Mahavishnu temple was atleast an hour’s drive away and the temple would close by 12 noon. We had no hopes of making it in time, but we decided to give it a try.

Starting from Vijayawada, the route to Srikakulam (not to be confused with the Srikakulam near Vizag) goes along the banks of the River Krishna. It is like the river keeps you company by travelling along with you, sometimes hiding behind the fields and trees and sometimes walking close by you. There are places where the road is almost on the river bank. Approaching summer months meant all we could see of the river was the dry, sandy bed with small pools of water here and there.

From Vijayawada, the Krishna river officially begins its journey towards the sea as it splits into various branches and the entire region constitutes the fertile Krishna Delta. This delta served as the cradle for the Andhra civilisation and culture.

The beautiful scenes of the river, bordered by lush green fields and plantain groves made us stop every few meters to click pictures. We even stopped to buy an entire bunch of the “Chakkara Keli” variety of bananas that are very popular in this region, the sweet taste of the fruit gives its name Chakkara (Sugar) Keli. The result of all that – it was way past closing time when we reached Srikakulandhra Mahavishnu temple.

The King who became God

We’ve heard of Srikakulandhra Mahavishnu before but always thought it was an avatar of Lord Vishnu. It wasn’t until just before this trip that we learnt about the history of the place.

Srikakulam was one of the earliest capitals of the Andhra region, going back to pre-Sathavahana times. The Srikakulandhra Mahavishnu is believed to have been one of the earliest kings of Andhra, he was such a great king that his subjects gave him the status of God and built a temple for him ! This legendary king is associated with expanding the Andhra region between Srisailam, Bhimeswaram and Kaleswaram, these 3 places have 3 very important Shiva temples and when plotted on a map form a triangle giving the name “Trilinga Desa” or as it came to be known, Telangana ! So technically, in the times of Andhra Mahavishnu, Andhra and Telangana were one and the same, we have no idea when and how things changed !

There are no proper historical records but the temple is supposed to have been in existence by the time the Sathavahanas came to power. In fact, there is a theory that Srikakulam was an early capital of the Sathahavanas.

In all possibility, the temple’s foundations go back by more than 2000 years, making it one of the oldest temple sites in the country. Today, Srikakulam of Krishna district is a small village, long gone are the years when it was probably a flourishing city on the banks of the River Krishna.

When we reached the temple, we were told the priest had closed the temple Sanctum door a few minutes before. We had been expecting it, so we weren’t too disappointed. For us, setting our feet on the historical place by itself was a big thing !

As it stands today, the temple has no traces of its ancient history. Most part of the temple is completely renovated and newly built. 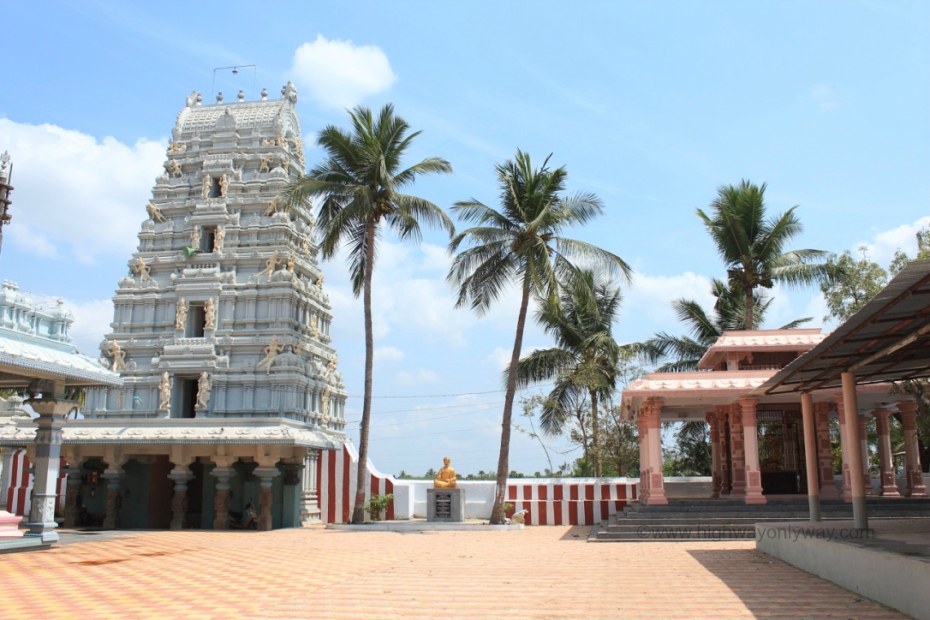 The oldest part of the structure, we read, belongs to the 10th-11th Century A.D.

The Garbhalaya was closed but we managed to peep through a small gap between the doors , we could make out an ancient pillared hall that lead to the Sanctum. We had to be content with a picture of the shrine from outside. 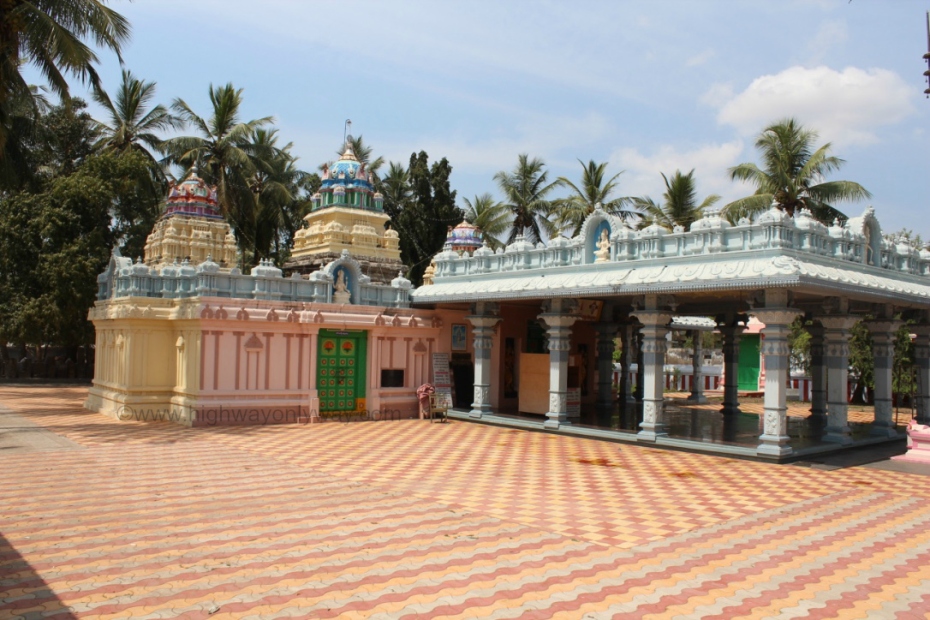 The history of the temple hides itself between the modern construction like these rows of pillars at the base of the Gali Gopuram. 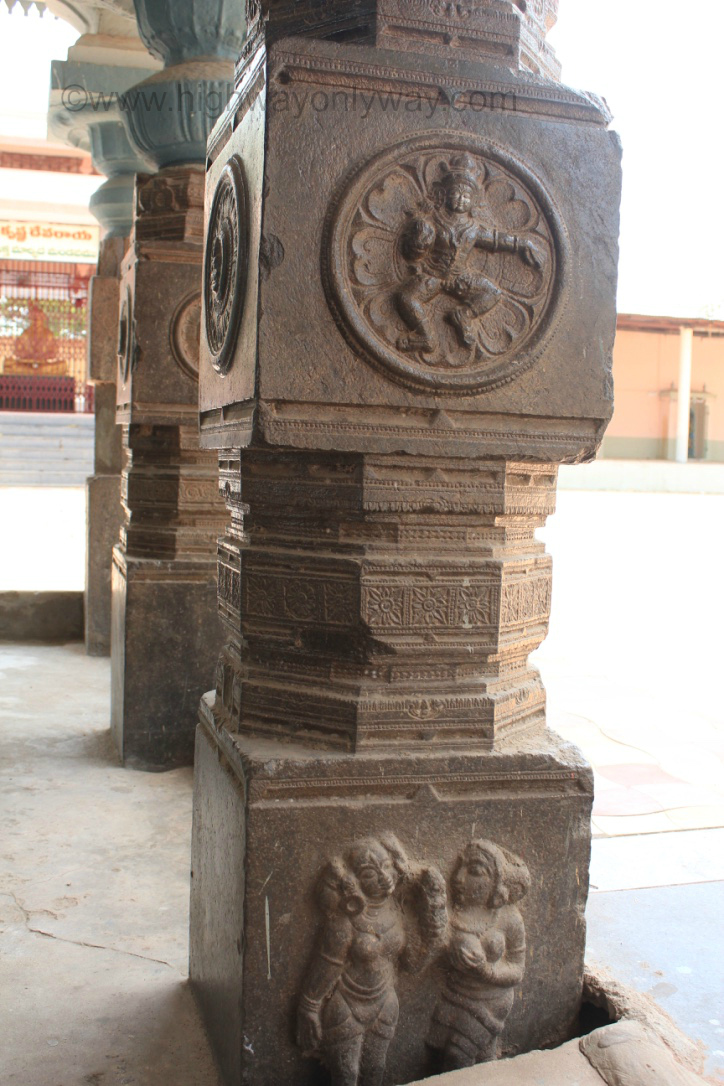 Behind the temple, there is a sloping tile roofed, traditional cottage which is supposed to be the temple administrative office, we found the office very cute. How would you like working in an eco-friendly office like this, far away from the closed, air-conditioned buildings?

We met of a lady who was incharge of cleaning the temple and chatted with her, she told us the temple was renovated and painted in recent years when the Sri Krishnadevaraya Utsavalu (Festival) were initiated.

If you are wondering what Sri Krishnadevaraya had to do with Srikakulandhra Mahavishnu temple, read on !

Some 1500 years after Andhra Mahavishnu, one of the greatest kings to have ruled this country, Sri Krishnadevaraya, wrote his popular Telugu epic poem, “Amuktamalyada”. In the opening chapter of the epic, Sri Krishnadevaraya writes about the inspiration behind his work.

He says while returning from his Kalinga expedition, he set up his camp at Srikakulam by the Krishna River and heard about the famous king Andhra Mahavishnu. He visited the temple and later that night, he dreamt of the Divine king, who asked him to write the story of how he, an avatar of Lord Vishnu married Andal, the daughter of Periyalwar in Srirangam. After appreciating the literary works of the Sri Krishnadevaraya in Sanskrit and other languages, Andhra Mahavishnu asked him to write the epic in Telugu. And thus, “Amuktamalyada”was born.

Sri Krishnadevaraya clarifies why Andhra Mahavishnu asked him to choose Telugu. Here is  goes the verse from Amuktamalyada, Chapter 1, verse 15:

It translates to: “If you ask me why Telugu? My country is Telugu, I am Telugu king, I am one among the Telugus. You, who is served by kings from all regions, know by speaking to them that of all the languages in your kingdom, Telugu is most beautiful”. Sri Krishnadevaraya was a scholar in various languages including Sanskrit, Kannada, Telugu and ruled over almost half the country.  If someone of his stature said that about Telugu, a lover of the language cannot ask for more. A verse that kindles your emotions for the language !

In honour of Sri Krishnadevaraya and his immortal literary work, there is a mandapam called the “Amuktamalyada mandapam” in the temple premises. 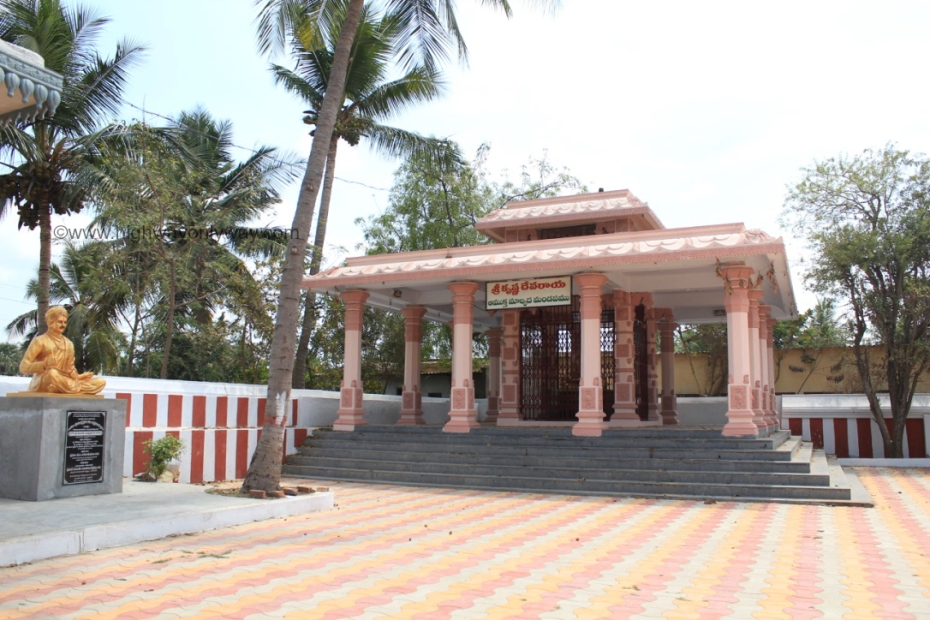 A statue of Sri Krishnadevaraya has been installed inside the Mandapa. 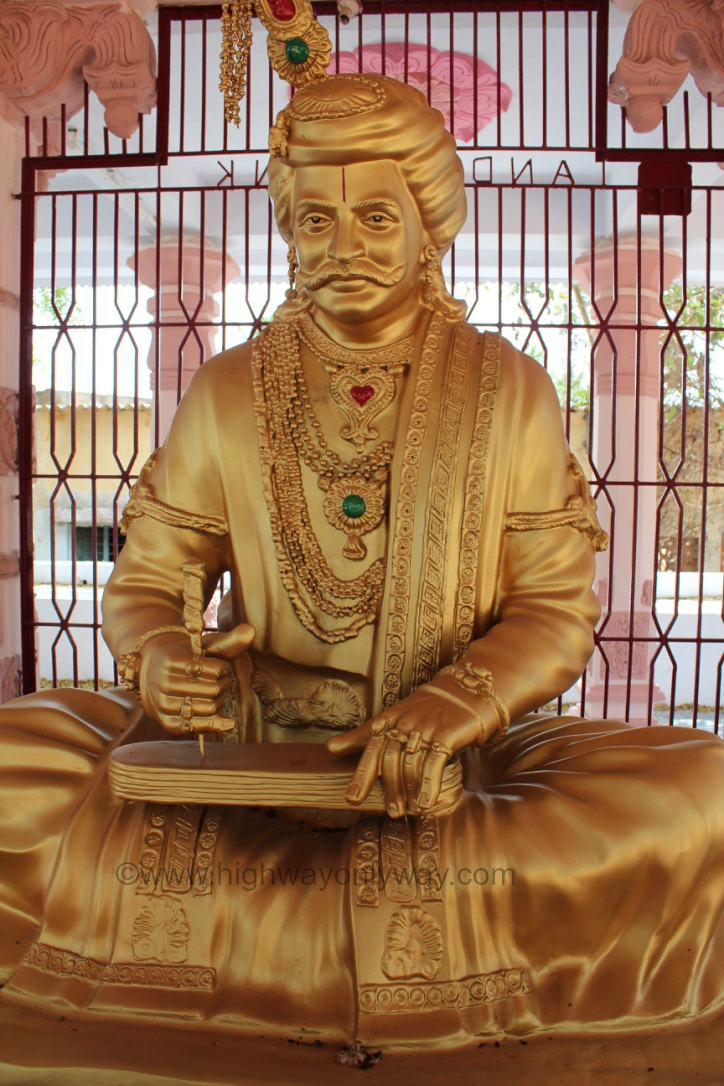 The statue looks more like NTR, who immortalised the king on the screen, the real Sri Krishnadevaraya is not believed to have been so good looking !

On all four sides of the pedestal, there are engravings of verses from Amuktamalyada including descriptions of the glory of Andhra Mahavishnu as he appeared in the king’s dream.

Outside the mandapa, there is another statue of Kasula Purushottama Kavi of the 18th Century, A.D, who hailed from this region and wrote literary works in praise of Andhra Mahavishnu.

It was an overwhelming feeling to be at the place where the titans of Andhra and patrons of the Telugu language once walked. How much do we value this classical language today? How much of this heritage do we really know?

With those thoughts, we left the Sri Kakulandhra Mahavishnu temple, hoping we could make another visit on our return journey if we could make it within the temple timings.

Leave a Reply to HOW Cancel reply