Continuing our drive through the Buddhist hub of Andhra Pradesh, our next halt was Bhattiprolu, an hour’s drive from Ghantasala. Throughout the drive, scenic villages gave us company, good roads were an added blessing. The route takes you to Mopidevi, where there is a very famous temple dedicated to Lord Subramanyeswara. The temple was closed for the afternoon, so we skipped it. You cannot miss the temple because it is located right on the highway.

As it always happens during our weekend trips, we skipped our lunch too. Weekend trips are packed with a long list of places to visit and not stopping for lunch saves some time. Travel is only thing that could make us skip a meal !

Shortly after passing through Mopidevi, we had to cross the River Krishna and enter Guntur District. From here, the River seems to be branching out as it nears the sea, for we crossed 3 bridges across the 3 branches of the river, each one more beautiful than the other !

Who would worry about missing a meal when you have such mesmerising sights and feast for the eyes?

One of the branches is called Pedda Kaluva (Big Canal), Kaluva is usually used to refer to a small water canal and we found it amusing because at that spot, the river Krishna was probably the widest we had seen during this trip !

The river has been the cradle of Telugu civilisation and the source of livelihood and agriculture in the region from time immemorial !

Even to this day, with several dams harnessing her force, agriculture thrives in the region, all thanks to this ever giving river. We passed by rice, vegetables and maize fields, the richness of the soil evident in the acres of fertile land that stretched on either side of the road. The sights were so pretty, you couldn’t pass without capturing the sights.

Pretty soon 35000 acres of agricultural land in the fertile Krishna Delta will soon give way to the new capital city of Andhra Pradesh. Development? Yes, but at what cost? Every time we saw green fields, this thought immediately came to us.

Admiring the sights and sounds of rural Andhra, we reached the vicinity of Bhattiprolu from where the so far good roads gave way to just a pathway of gravel ! For about 5 kilometres, driving was difficult, the hot afternoon sun, making it only worse, add to that our strong principle of not using AC and taking in the fresh village air ! It was hot and sultry but that is how it is supposed to be and your body is actually tuned to it, ACs and other comforts are actually alien to your body, it is our minds that have got used to the comfort !

The road got no better but there were some pleasant views like this one, the rail track to Bhattiprolu surrounded by greenery  and dark clouds !

The dark clouds actually surprised us as we reached the village of Bhattiprolu, suddenly the weather changed, heavy clouds filled the sky with nice, cool breeze blowing all around.

Building blocks of the Telugu script

Just as it was about to drizzle, we reached Bhattiprolu. Now, if you are wondering what the fuss about Bhattiprolu is, the tiny village of today was once an important Buddhist centre and considered one of the oldest known cities of South India. Known as Pratipalapura in ancient times, it probably pre-dated the Satavahanas, going back to sometime in the 3rd Century B.C.

According to the information board at the site of the Stupa, the inscriptions found near the Stupa talk about a King Khubiraka, who commissioned the building of the Stupa and caskets containing relics of the Buddha to be placed inside it. Today, the Stupa looks like a mound of bricks. 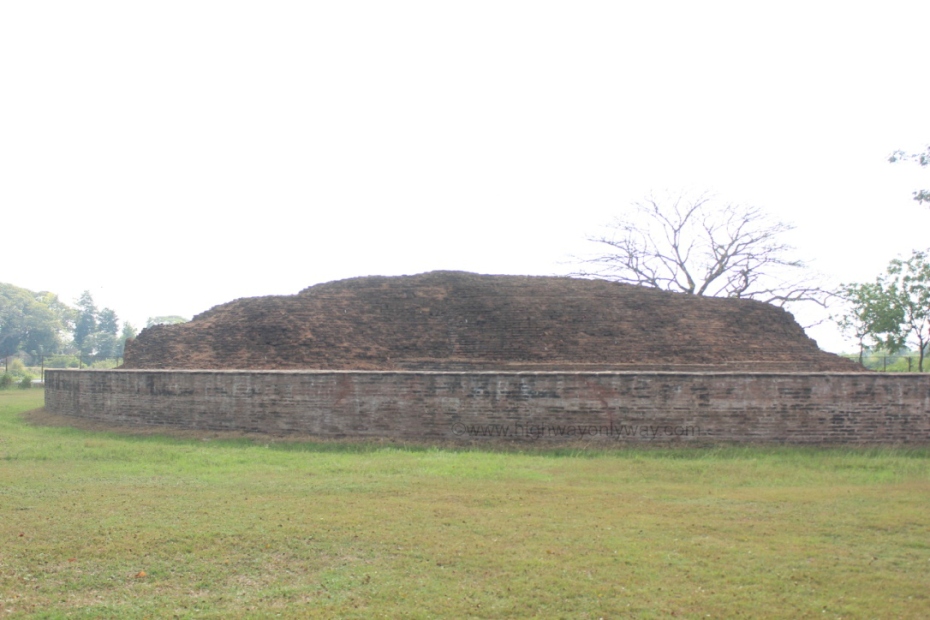 Originally, there were supposed to be 3 Stupas in the village but after all excavations done in the 1800s, this Maha Chaitya is the only remaining monument.

Buddha’s relics and ancient Stupa are not the only reasons why Bhattiprolu is famous in the Indian archaeology. On the urn containing the relics, a form Brahmi script was found. This script, now known as the Bhattiprolu script is believed to be the earliest form of Brahmi that worked as the building blocks of Telugu, Tamil and Kannada scripts. For anybody following ancient history and the evolution of languages, visiting Bhattiprolu is a like a pilgrimage !

Sadly, not many people seem to have a clue about historical value of the place. The Stupa is located at the edge of the village, enclosed by fencing and surrounded by a garden.

There were no tourists at the place, only locals taking an afternoon siesta under the trees and some young boys hanging around and having a gala time.

Ignoring the surprised look on the locals who must have been wondering why anybody would be interested in the mound, we went around the stupa. The Stupa is constructed on a raised platform with a few steps leading to the top. Unlike the Ghantasala Stupa, this one has not been reconstructed.

The ancient bricks have crumbled and you can find grass growing between the gaps, you stand there and think – “wow, 2300 years !”

There was a light rain as we walked around the Stupa, we thought the Buddha was happy with us and was cheering us with some rain !

There is technically nothing left of the Stupa to see as such, it is all about the feeling of standing before a monument that was witness to those times when our history was taking shape ! In addition to the Stupa, there were a few remains of probably a marble pillar which was once a part of the main structure. 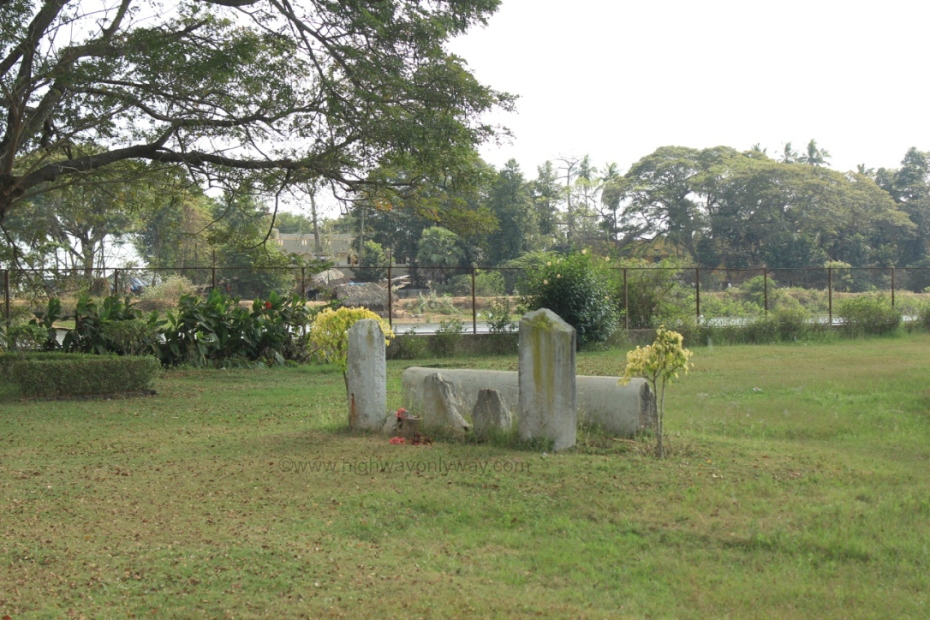 Just beside the Stupa, there is a small lake, we found it difficult to click pictures with both the Stupa and the lake in frame because the dark bricks weren’t giving off enough light against the cloudy sky and the pictures turned out dark. We hadn’t planned this picture to turn out like this but we thought it had that “mystic, ancient” feel to it !

If we adjusted the settings to throw some light on the Stupa, the sky became too light ! It wasn’t capturing the beautiful clouds. This is the only image that looked a little better.

The picture hardly tells you the story – one side there was ancient monument, venerated by monks, kings and public, on the other, the pleasant blue lake, green trees around, light drizzle and cool breeze. You simply wanted stand there for another 2000 years !

But, worldly things like time and hunger remind that you can stand there only for 20 minutes and so it was time to get going. It was past 4 PM, the day was ending but our schedule for the day hadn’t.

After some tiring yet thoroughly enjoyable hours of travel, we had to re-energize ourselves. Despite the light rain, it was still humid and sultry and we needed something cold to drink, water or soft drinks weren’t going to do the trick. A few meters away from the Stupa site, we found a fruit juice stall selling water melons, the perfect relief against the heat !

After a couple of slices of water melon, we spotted the Chakkarakeli Bananas and ordered a Banana milk shake. The sugary sweet variety of banana was mixed with chilled milk, ice and topped with a sprinkle of Horlicks powder – one sip and we almost screamed out in joy like the Minions – “Bananaaaa” ! That was the best, refreshing milkshake we ever had in our entire life ! If not for the history, we wouldn’t mind visiting Bhattiprolu once again for that Banana milk shake alone !

Still revelling over the milk shake, we turned our car towards Machilipatnam. We took the Repalle route this time, slightly longer but we could avoid the bad roads. The idea was to reach Machilipatnam, check in at our hotel, take a quick break before heading to Kuchipudi. It was going to be a 1 hour 30 minute drive to Machilipatnam, we had to take the same route back for half the journey, we crossed the Pedda Kaluva and Mopidevi again.

Technically, Bhattiprolu was a little out of the way but the detour was nothing compared to the experience of being visiting the birthplace of our written word and Horlicks laden Chakkarakeli juice !