Though we blogged about it, the trip to Pithapuram and Annavaram doesn’t technically qualify as a trip, so the weekend after we returned from Pithapuram, we made a short trip to Uma Maheswaram. There was no specific reason,just a random day trip, so random that we did not even take our camera, we wanted to try the camera of our new iPhone.

Uma Maheswaram is located at the foothills of the Nallamala Hills and considered the Northern gateway to Srisailam. As we all know, Srisailam is supposed to have 4 gateways, Uma Maheswaram in the North, Tripurantakam near Ongole to the East, Alampur in the West and Siddavatam near Kadapa to the South. When you plot these places on the map, each of these places are at the edge of the Nallamala Hill range or from where the hill range starts on each direction and Srisailam is located deep in the Nallamala Hill range. It is very interesting how these associations came about over centuries !

A mini version of Srisailam

It was mid-morning, nice and bright and we almost had the road for ourselves. We reached Uma Maheswaram around a little after 11 AM. It was a shocker for this writer, the moment we stepped out from car, the place is a full of monkeys ! Monkeys to the left, right and centre ! If anybody has a phobia of monkeys, this place will rid you of it !

If you can look beyond the monkeys, Uma Maheswaram is a serene place. Nestled in the middle of Nallamala forest, the temple is cut into the face of a hill with the mandapa built around it. The temple’s recorded history goes back to the Kakatiya times. 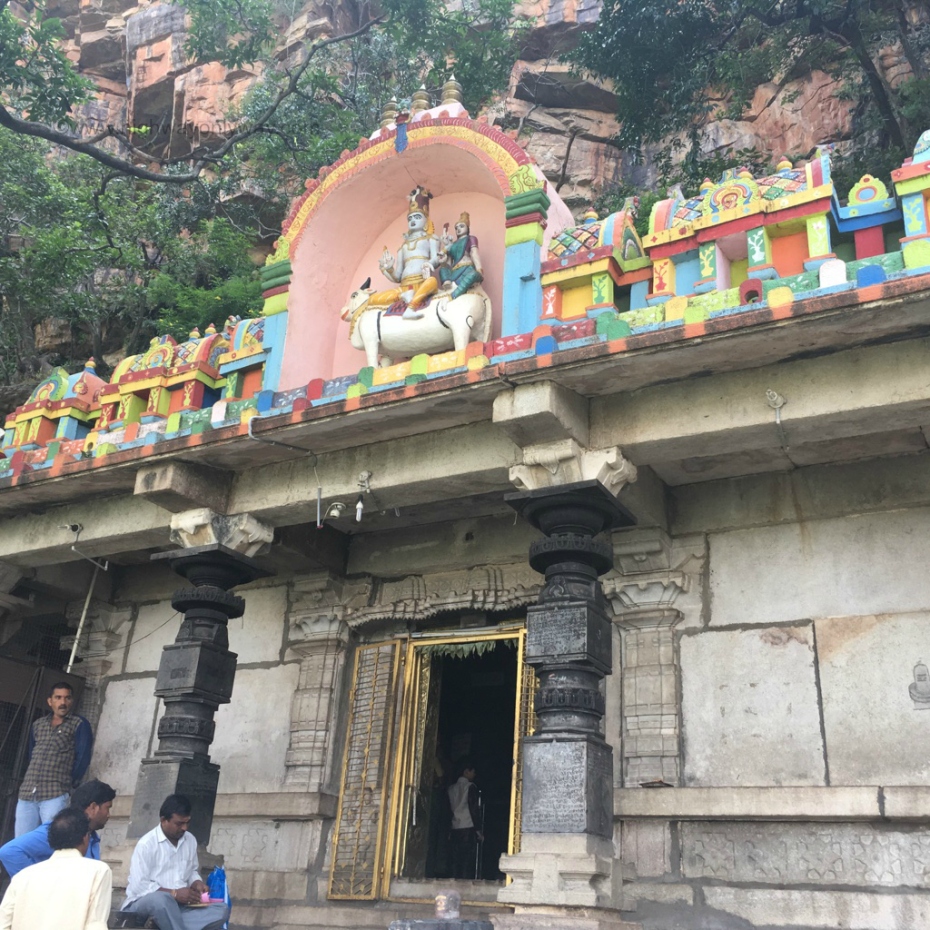 With hardly any crowd our darshan was complete in 5 minutes. There were a few people performing Abhishekam, like Srisailam, at Uma Maheswaram too, you can personally perform the Abhishekam.

Navigating our way through the monkey groups, we lounged outside the temple, taking in the picturesque landscape of the Nallamala Hills.

These Hills form some of the most dense forest ranges of our country.

Eternally washing away your sins

A short walk from the temple, will take you to Papanasanam, a small stream that flows beneath the mountain rocks. The speciality of Papanasanam is that, the stream flows into a small pit and at any given time, you can scoop out a mug of water and the moment you take some water out, it refills itself within seconds ! The belief is, sprinkling this water over you will wash away your sins.

The pathway is along the edge of the cliff, on one side, the hills will leave you blinded by green ! 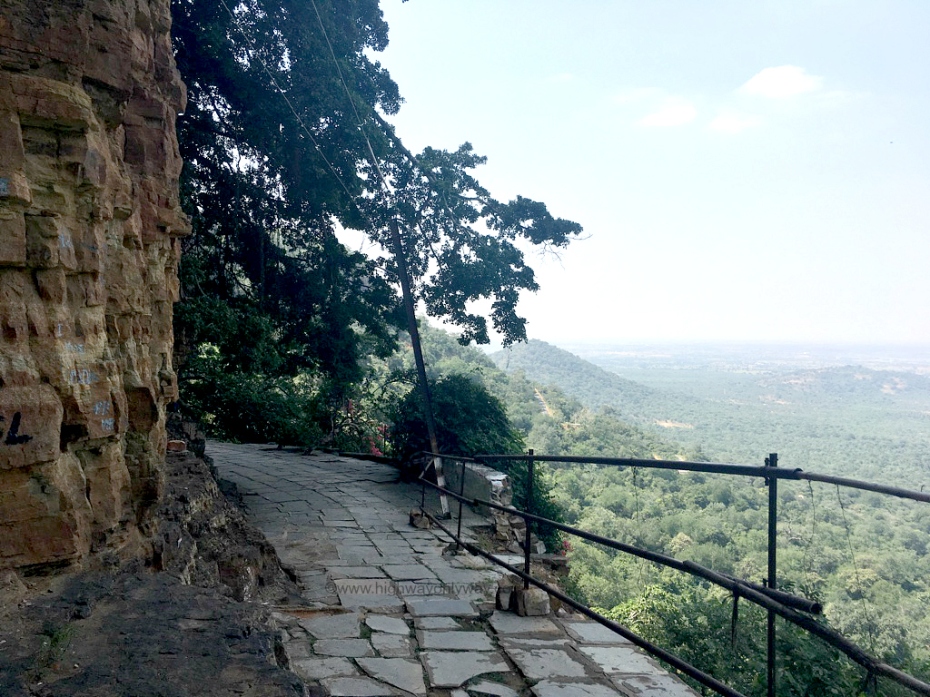 On the other side, you have the rugged, brown, wind weathered rocks. This particular gap in the rocks looks like a cave, there are a few idols of Naga Devathas. 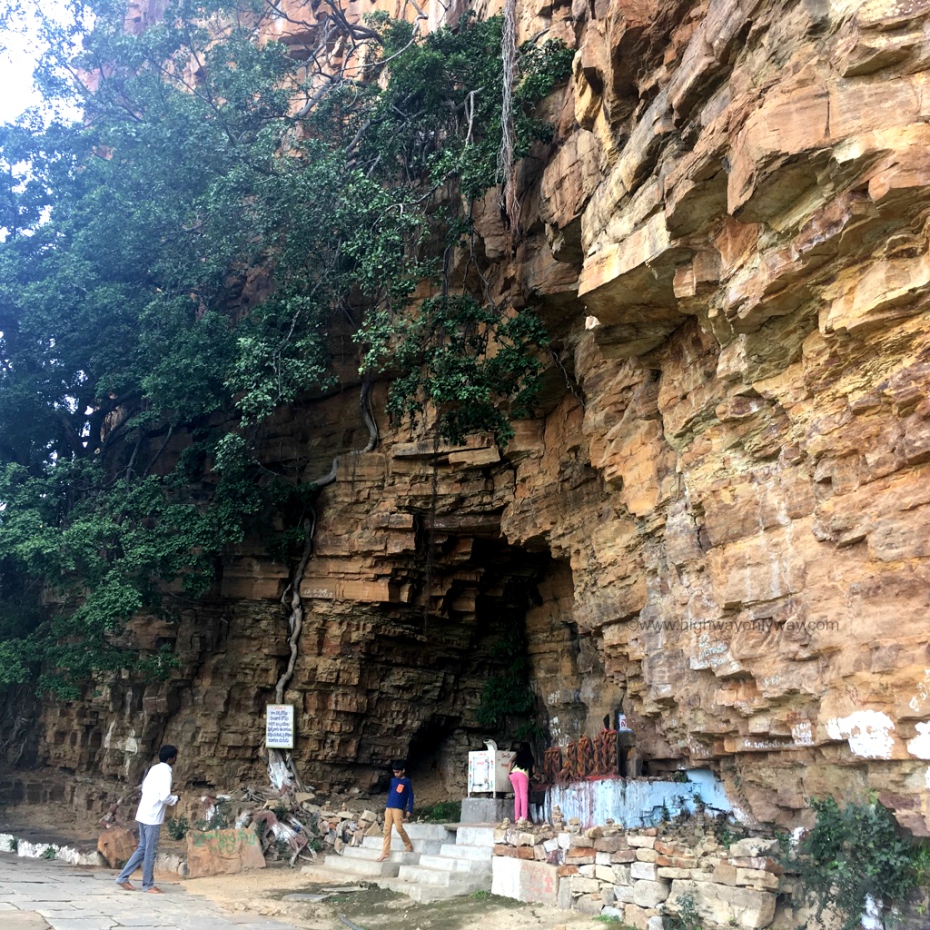 The rocks are entwined by massive branches and roots of Banyans trees, growing off them for hundreds of years ! Some have taken the shape of an archway welcoming you to a breathtaking view of the hills. 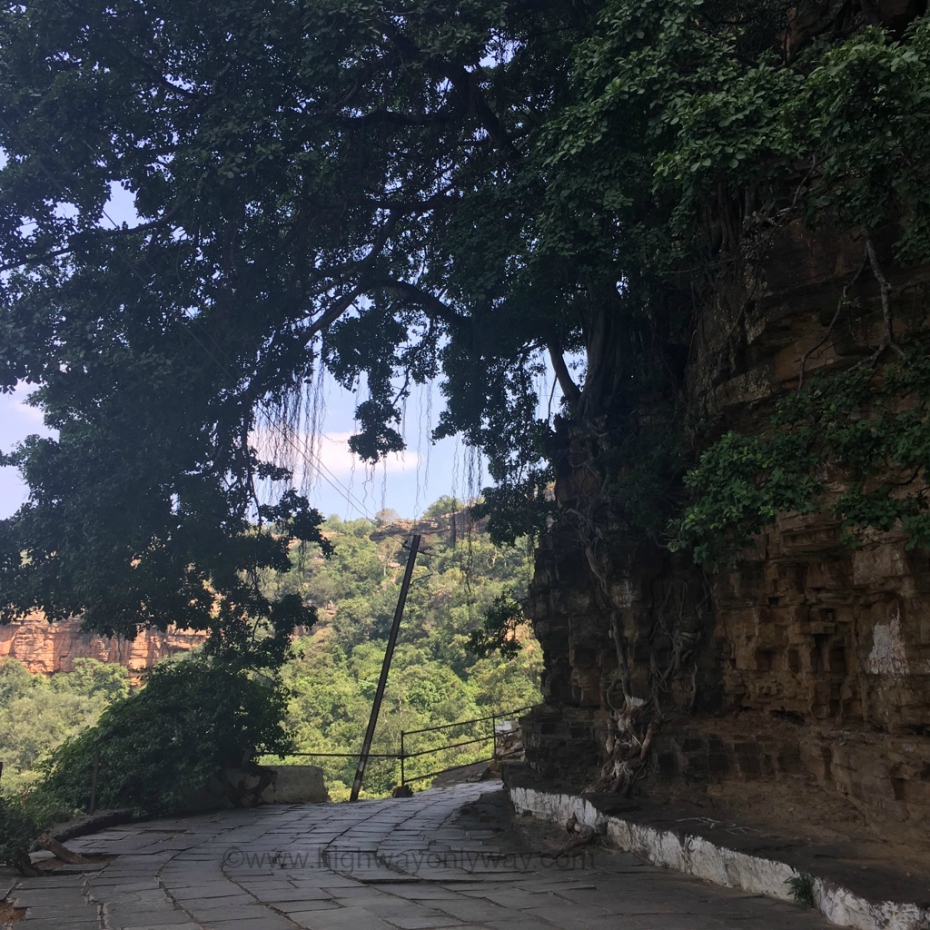 You can sit under the shade of these trees and breathe the cool, fresh, unpolluted air.

Take a few steps under the Banyan trees on your way to Papanasanam. 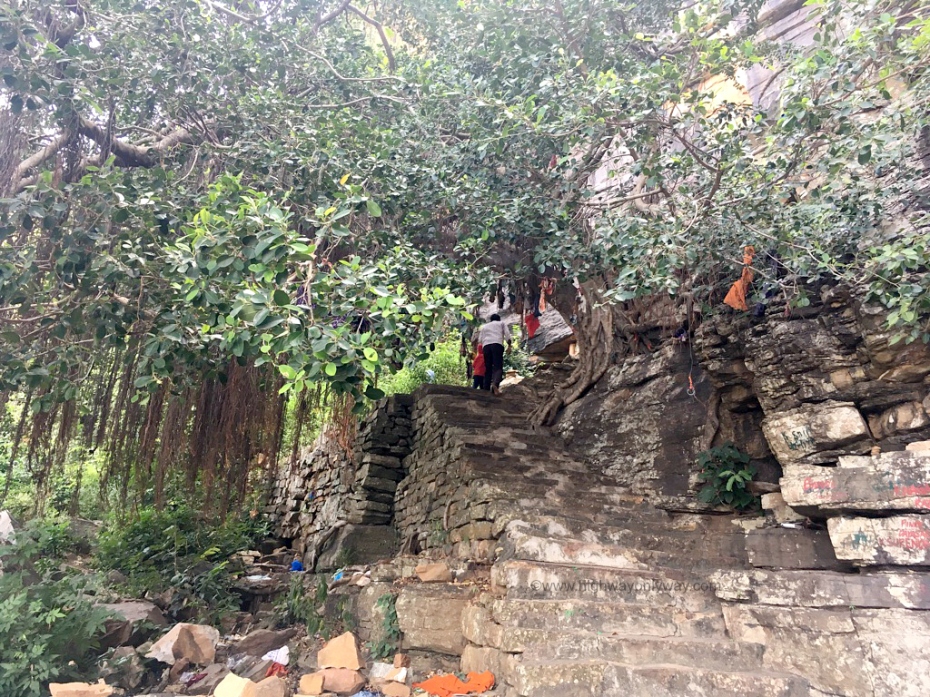 Our people haven’t spared the roots of these Banyan trees, you will find cloth swings, bangles and ribbons tied to them in belief that their wishes come true. Some times. you are stuck between laughing at such beliefs and respecting people’s beliefs ! To each his own, is what you tend to conclude. 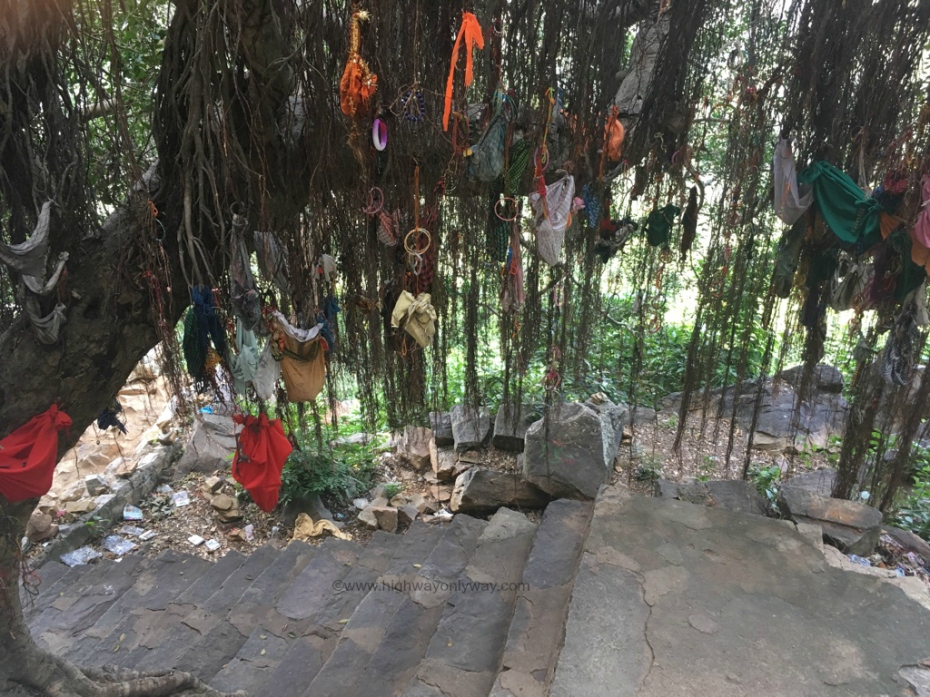 All along the path, you will find monkeys lined up, they don’t seem to bother unless you have something interesting in your hands.

Further up, the path way opens up to the rock face of the hill that looks like a massive fort wall turned black from millions of years of water flowing down, we suppose.

The Papanasanam stream flows from somewhere under these rocks.

And, this is the magical water pit.

You can hardly see the water flowing from the stream but this pit is always full of water, probably the water oozes from under the rocks continuously or some such geological logic ! We have to read up more on the wonders of our planet and its geology !

People were washing their feet and sprinkling the water over themselves, we followed the process too, not that our sins would be washed away (you can’t redeem chronic sinners) but simply to get the “feel” !

Our visit to the temple and Papanasam was done in all about 30 minutes, including lazing around under the trees, we would have sat there for some more time if not for the monkeys. They don’t really trouble you but for someone with a phobia of monkeys, it could get a little uncomfortable, sitting under the trees while the monkeys happily play around.

We were past lunch time and decided to head back. The road was still so deserted that we stopped the car, stood in the middle of the road and managed to click pictures. The long, straight road disappearing into the hills, was a must click !

Somehow, this photographer wasn’t very happy with the iPhone camera experiment. The pictures look great on the phone but when transferred onto a bigger screen, they are no longer so good looking. Give the photographer a Canon any day but then some people in the group would say, it is not about the camera but it all about the photographer !

On the way, we took the Srisailam Ghat road and drove up to Mannanur check post because we love the Srisailam road. We stopped for Mannanur check post for a quick break and even bought some traditional mats, way cheaper than what you find in the city. We were briefly tempted to make a trip to Srisailam but had to drop the plan because we had to return to Hyderabad the same evening and it would have gotten hectic.

Lunch was a typical Andhra meal at a restaurant near Kalwakurthy and then we were back home by late evening. A short trip that was full on the “joy of travel” quotient.