“Sri Rangapura Vihara, Jaya Kodanda Ramavatara”, Carnatic music followers would know this gem of a keerthana composed by Muthuswamy Dikshitar and made famous by the legendary voice of M.S.Subbulakshmi. The song is in praise of Sri Ranganatha of Srirangam, the primary deity of Vaishnavism. The River Kaveri, on whose banks this temple is situated, hosts 2 more famous temples along its course, one at Sri Rangapatna, another one close to Shivasamudram. Inspired by the temples at Sri Rangapatna and Srirangam, 665 kms away in the modern day state of Telangana, another temple was built to venerate the “Rangapura Vihara”. The place has come to be known as Srirangapur.

We in turn, taking some inspiration from this song, made a short trip to Srirangapur on Vaikunta Ekadasi in January this year. When travel is your God, every festival is a reason to go out and see the world.

A Foggy morning on NH44

Srirangapur is a 3 hour drive from Hyderabad on the Bangalore highway. Our trip began at 6.30 AM on a cold, Hyderabadi winter morning, half way through Outer Ring Road, we encountered thick fog, we could barely see the car in front of us and beyond that we could only see the hazard lamps of vehicles before us.

It was slightly scary but thrilling too. The drive through the fog continued all the way till the famous Hill Park restaurant at Balanagar, 20 kms from Jadcherla.

When we got down at the restaurant for breakfast, we were greeted by chill, misty air, we could almost feel the dew on our faces ! Hill Park restaurant is a well known pit stop on the Hyderabad-Bangalore highway. The restaurant is a drive-in restaurant and the food is great ! We had a delicious breakfast of Idly, Dosa and Pongal served with one of the tastiest sambar we had outside Tamil Nadu. Try hot Pongal on a cold day, you will not forget the experience for the rest of your life !

Srirangam of the North

Driving further on the Bangalore highway, we were quite surprised to find several new food joints, a few years ago, after Jadcherla, there were very few decent hotels till the AP border at Penukonda. We don’t know if there is any change beyond Kurnool because, just after Pebbair, we left NH44 and deviated towards Srirangapur. We arrived at Srirangapur around 10.30 AM.

At the entrance stands the Gali Gopuram, one look at it and it felt like we were transported to all the previous Ranganatha Swamy temples we had visited before – Srirangam, Srirangapatna, Nellore. 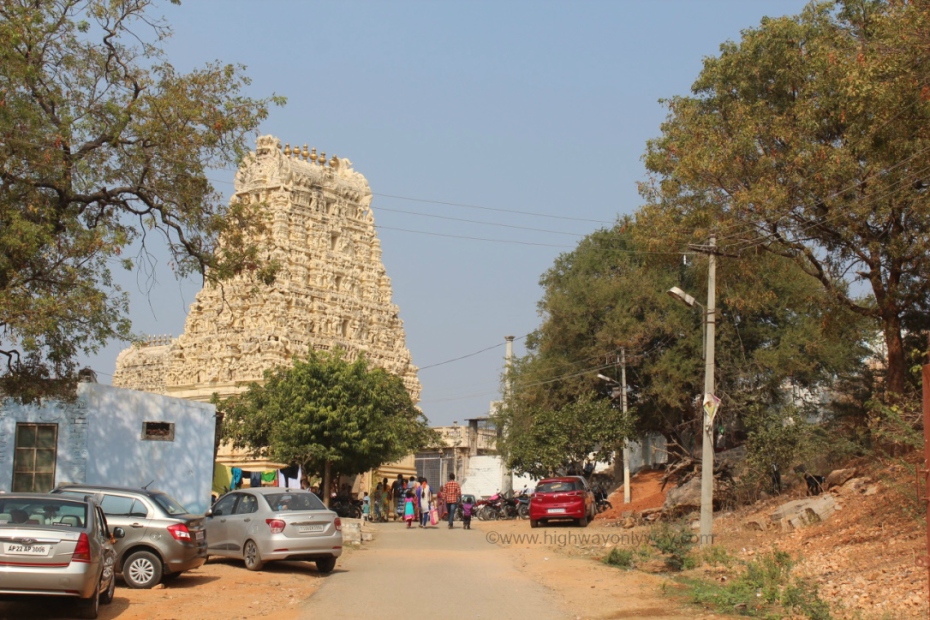 According to historical records, the story of Srirangapur goes back to sometime in 1660s A.D., when a king named Gopala Rao of the Wanaparthy Samsthanam visited Srirangapatna near Mysore, was mesmerised by the temple and decided he wanted to built a similar one in his kingdom. Srirangapur was chosen as the spot for the temple because, the place had a river stream flowing beside like the Kaveri on all three sides of the Srirangapatna temple. The stream has now been made a reservoir and is called “Ranga Samudram”.

The king invited sculptors from Mysore and Tamil Nadu to get the feel of Srirangapatnam and Srirangam. The construction of the temple began in 1670 A.D and was completed in 1680 A.D. The king’s successors and descendants have since taken care of the maintenance of the temple, the culmination of all their efforts is this beautiful temple at Srirangapur ! 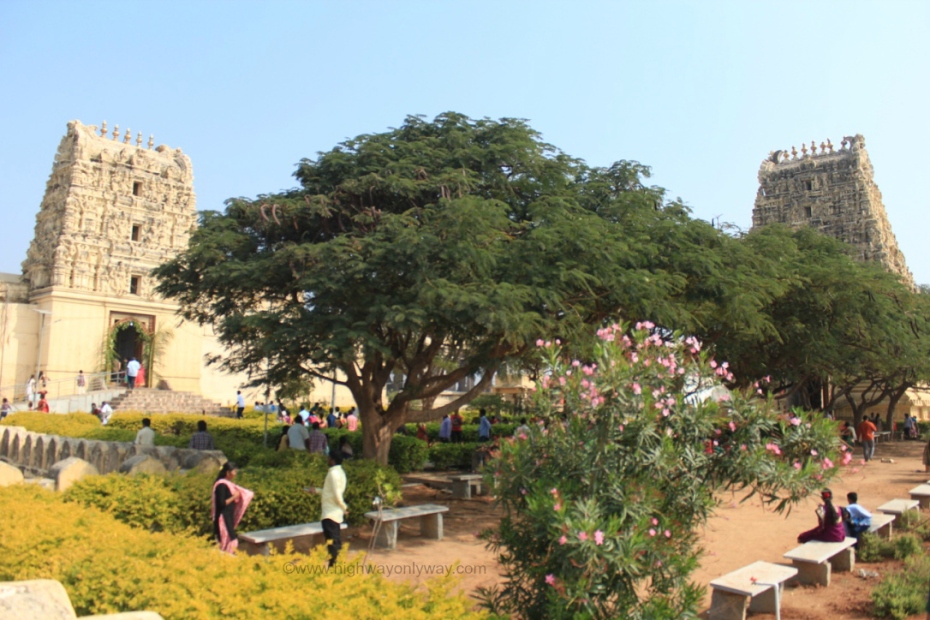 An interesting point is that, historically, Telangana has been a Shaivaite region, it is quite unusual to find such a grand temple dedicated to Lord Vishnu.

The environs are well maintained and the water body nearby makes it a very peaceful place to sit and relax your mind.

As you step inside the temple, there is a sculptural panel of Lord Ranganatha on the Gopuram walls, a scaled down model the main idol.

Beside it is another panel with a sculpture of Sri Ramanuja, the Vaishnava Guru and a stone edict detailing the history of the temple and the Wanaparthy kings involved in its expansion and maintenance over the years.

With the Vaishnava Urdhava Pundra (Tilak) drawn everywhere, you know who is the “Boss” at Srirangapur !

Walking through the pleasant gardens with views of the Ranga Samudram, you arrive at another gopuram enclosing the Sanctum, this architecture is slightly different from the regular gopurams.

Enter inside and you will be surprised to see how closely the interiors resemble the ones at Srirangam. 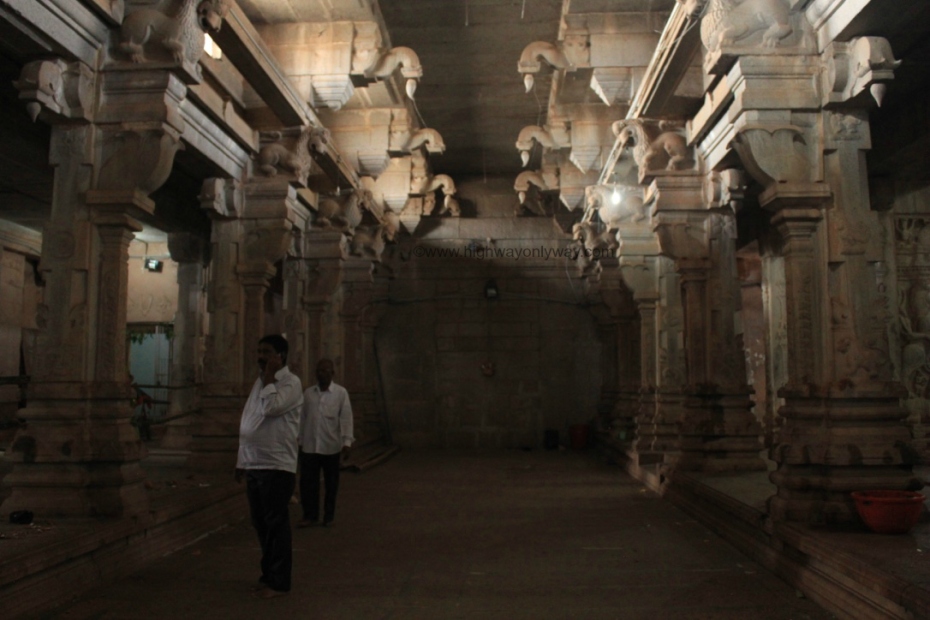 It is almost like a mini version of the Srirangam temple.

This kind of sculpture is almost a replica of the famous 1000 pillared hall of Srirangam, must have been the influence of sculptors from Tamil Nadu.

It is rare to find this kind of architecture and sculpture in temples North of the Krishna because the Tamil Nadu and later the Vijayanagara architecture did not extend much influence beyond the Krishna River.

As of now, you are allowed to click pictures inside the temple except pictures of the Garba Griha and the main idol.

The temple was crowded owing to Vaikunta Ekadasi, we took the special darshan tickets, which made it slightly easier for us. The idol of Lord Ranganatha reclining on Adisesha, is always a sight to behold ! The temple doesn’t seem to have the “Uttara Dwara Darsanam” or the darshan from North entrance, which is the significance of Vaikunta Ekadasi.

We spent some time walking around the Sanctum, admiring the architecture and sculpture and stepped outside to feel the breeze around the Kalyana Mandapam.

One side of the Mandapam opens out to the lake and the view is refreshing. One can enjoy the views better if not for the monkeys having lot of fun pulling the mango leaves and stealing bananas from the thoranas. Beware, there are a lot of them jumping everywhere !

The constant feature of this temple is the Ranga Samudram lake. Wherever we turned, we could the bright blue water lit up by the mid day sun.

The Prakara (outer walls) of the temple have been built to look like a fort wall and at places there are steps leading down to the lake. 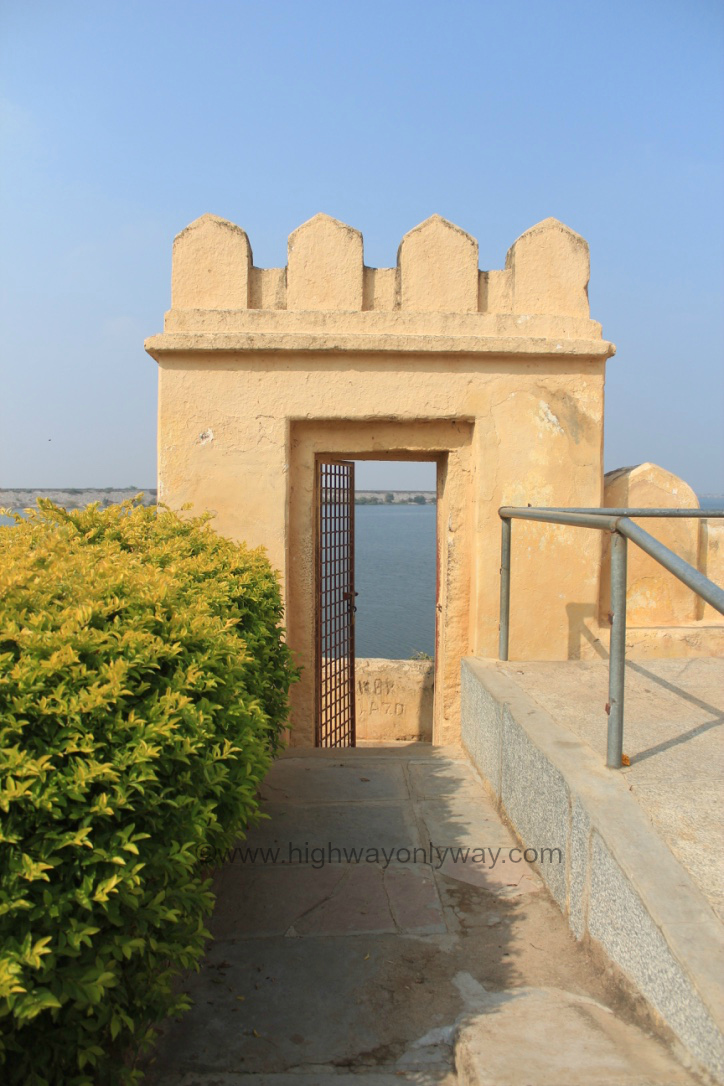 In the distance, you can also see a ruined structure, which was supposed to be some kind of a dancing hall.

We sat under the trees and shared stories of India’s temples, architecture and history before making our way out of the temple, feeling amazed at the cultural heritage that we have bequeathed !

A few yards away from the temple premises, is a step well built 200 years ago. Of course, it now looks like a dump yard with all the plastic covers and filth.

Why is it that we are very enthusiastic about forwarding messages on India’s ancient glory social media but don’t give a damn to safeguarding the very remnants of those times?

We had read about the temple before visiting and sort of knew what to expect but any new place you visit has something so special that you can never really prepare for the experience. Such was our trip to Srirangapur.

Travel and food is all we need

It was lunch time when we headed back but we were still in the mood for more travel, we stopped at one of the swanky looking hotels for a quick bite but one of our guys decided he needed a full fledged Andhra meal which the hotel did not have, so we walked out, not before spotting a board listing all the tourist places within a 70 kms radius from where we were. “Jurala?” “This is not the season”, “Kollapur?” “Temples will be closed till 4PM”, “Alampur?” “All three of us have already been there!” After such deliberations, we decided Pillalamarri Banyan tree was the best option because it was on our way back to Hyderabad and one of our team member had not been there before. This writer didn’t vote for it but in a democracy, majority wins or when travelling, the man behind the wheels, decides the route !

The only condition this writer had – “food first” ! Pillalamarri, the 800 year old Banyan tree is 5 kms from Mahbubnagar. We stopped for lunch at a hotel in Mahbubnagar which served us a thoroughly satiated our craving for a proper Andhra Meal, what was more, it was a buffet and we are sure, the hotel manager regretted having set up a buffet ! There was this particular Tomato curry that we devoured, almost emptying the entire dish ! We don’t remember the name of the hotel after 3 months now but the Tomato curry is still fresh in our minds. Long live the Tomato curry !

When we visited Pillalamarri, the place was full of school kids on a picnic. What kind of a sadistic school brings kids on picnic on a Sunday? Picnics are meant to be on weekdays when you can miss classes for day and have fun ! We relaxed for about an hour under the shade of the Banyan tree going back in time to when we were school kids enjoying a picnic (the Banyan tree must have been a young one then !). This writer refused to click any pictures because the place had already been visited and written about but this one picture had to be clicked.

The Banyan tree was heavily fruit laden bearing, one doesn’t get to see a fruit bearing 800 year old Banyan tree, every day !

A quick look at the mini zoo of Pillalamarri and we were back on the road home. Next Vaikunta Ekadasi, you know where to go !

One thought on ““Sri Rangapura Vihara” !”