After 2 months of chanting “no leave during notice period”, the floodgates were opened a day before Bhogi this year when our travel partner became a free bird for 20 days before taking up a new work engagement. What do travel enthusiasts do when given 20 days? Travel, of course !

Even before the break began, trips were promptly planned, one would be a family trip to the South and another a long pending trip to the North. The South trip began on Bhogi day with our ever favourite drive from Hyderabad to Nellore. Starting a trip on a happy morning like this one, should be considered one of the most liberating feelings in the world ! 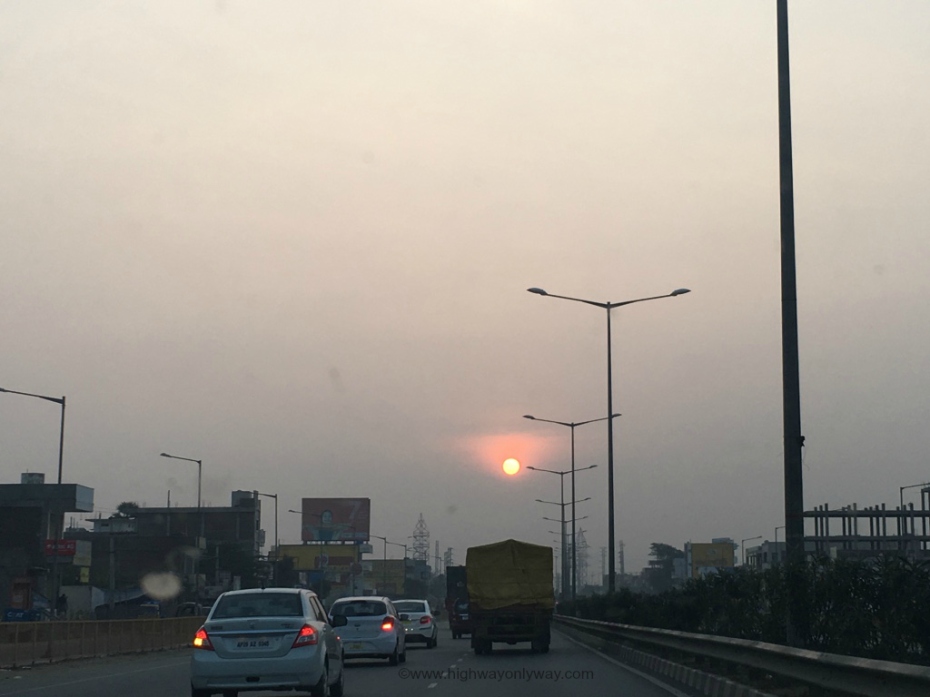 The whole idea was to chill, so we took our own time to reach Nellore, had a whale of time catching up with family and after a Sankranthi festival breakfast at home, our trip officially took off ! Chennai-Kumbakonam-Pondicherry, that’s where we were headed. Figo was given some rest and our family’s Vento with a TN registration would go with us on the trip.

A trip back in time

Warning: The rest of the post is a sentimental write up of this author’s love for Chennai city !

A visit to Madras is always like opening an old photo album. The memory box opens up the moment we step on the highway, back to the days when the NH5 was only a 2 lane highway, the days when there were no bypasses to towns and waiting at railway crossings ! The drive to Chennai in this trip was a breeze, being a festival day, there was hardly any traffic, it took us only about 2.5 hours to drive from Nellore.

We stopped for lunch at Sangeethas, one of the many outlets of the famous chain. We don’t even remember the area where we stopped, Chennai seems to have extended way beyond Red Hills.

Madras was home to this writer for 20 years, the moment we step into the city, we can see our growing up years in the 80s-90s flash before us, that was where it all began for us. The city’s landscape has changed but at every corner, memories peek out.

During this trip, we were to stay at Radisson Blue at Egmore because our frequent traveller brother had a few credit points we could use. Thanks to him, we had the luck of staying in a 5 star hotel in a metropolis like Chennai ! Before checking into the hotel, we wanted to visit the Chennai Museum. The last time this writer visited the museum was some 25 years ago for a painting competition, it is a different story that the writer was and is pathetic at art ! Since then, the only time we would look at the museum was while shopping at Fountain Plaza or Alsa Mall to point at the National Art Gallery and say “that’s where the popular song “Chandralekha” was shot !”

The Chennai Museum turned out to be a real treasure house of knowledge. We don’t remember it being such a huge place with so many blocks, galleries and exhibits, each as interesting as the other ! We were able to recall a few exhibits from our memories like the giant skeleton of a whale hanging from the ceiling. This writer almost shouted in joy on seeing the Chozha era Copper Plates with inscriptions. Anybody who follows Chozha history would be able to relate to that feeling !

We had only planned for an hour’s visit but we spend close to 3 hours visiting every gallery, quickly scanning through some and then realised, there was so much to see and learn at the museum that we need atleast half a day. Wonder why this interest never cropped up all those years we lived in Madras? Back then, if the school announced a visit to the museum, we would only groan !

It was past sunset time when we drove to the hotel, refreshed ourselves and visited St.Thomas Mount, another favourite place in our childhood. This historical Church, is now a National Shrine. The Church traces its history back to the time of St.Thomas himself, after whom the hill is named, recorded history goes back to the 15th Century A.D when the Portuguese were making their presence in India.

The place has completely changed, well laid road to the top of the hill, food joints, shelters, building, parking lots, teeming crowds. We couldn’t imagine that this was the same quiet, peaceful place we would simply drive to on an evening to watch the flights take off and land at the Chennai Airport ! We never realised it was more than 2 decades since we stepped onto the the hill !

From St.Thomas Mount, we took a ride on the Chennai Metro all the way to Koyambedu. Enroute we passed by all those places we lived in, went to school, shopped and grew up. Every single place had become massive, changed beyond recognition, even our rusty old Udayam theatre wore a swanky look, this writer spent every morning opposite this theatre waiting for buses to school/college and later office and over the 20 years of waiting, learnt to read Tamil from the cinema posters ! The ride on Chennai Metro was a joy ride, being a holiday, it was not crowded and the state of art stations and facilities made you feel so good about the strides we have taken from the days of travelling in local trains with a cardboard ticket !

Getting off at Koyambedu, the last terminus, we drove around the city passing by our school, our college, our hang out spots and pointing them out to the little ones in the family, who found it amusing that we too had been to school once upon a time !! A quick ride on the beach road was thrown in to wind up our drive.

Our dinner was at Murugan Idli Shop, the sacred destination in Chennai for the devout foodies and Muruga, how we binged on the food ! We ordered literally everything on the menu, multiple rounds of Idli, Kuzhi Paniyaram, Vada, Dosa, buckets of Sambhar and coffee ! This picture is only a teaser of what we had !

When the stomachs were ready to go on a strike for being over worked, someone suggested Sweet Pongal ! If the Idli was godly, the Sweet Pongal was even beyond the realms of divine ! God is where Pongal is !

Hardly able to walk to the car, we somehow managed to haul our heavy selves into the hotel to call it a day.

Ever heard of hangover from over eating? When you indulge in a food bout the previous night, you begin your day with green tea and promise yourself that you won’t repeat that again (only to break that promise at breakfast !)

Sipping our green tea, we sat by the window and watched the dawn turn into morning. 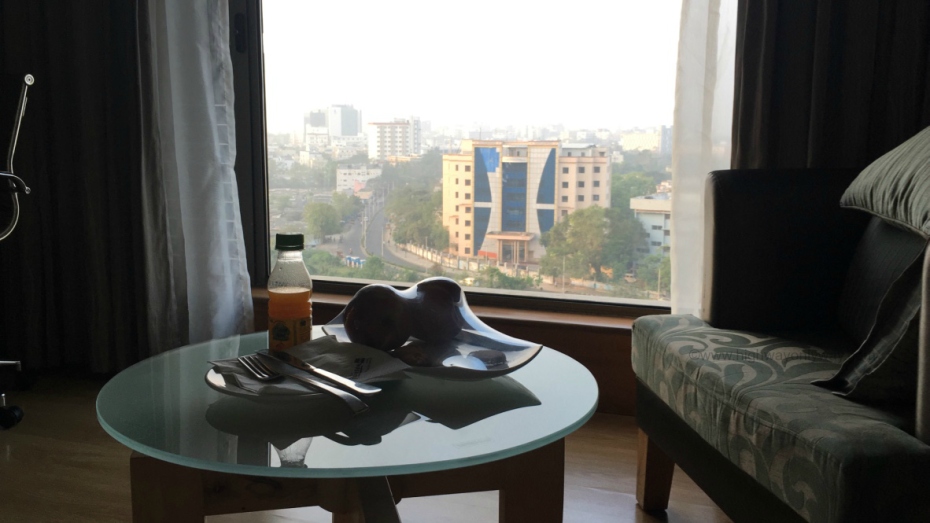 We were in for a surprise to find that the window also offered a view of the iconic river of Chennai. Cooum, this river has its place in the city’s heritage as a once navigable river, trade waterway during the British and today, the most polluted river in Tamil Nadu and Chennai’s sewerage ! It is so polluted with drainage that while growing up in Madras, “Cooum” was considered a word of profanity, kids from good schools were not expected to use the word Cooum !

Probably, we were feeling a bit sentimental about memories of Chennai, the Cooum river looked elegant as it flowed beside the hotel. Our convent schools would have approved of the word “Cooum” if they saw this view !

The shelter on the river bank is proof that boats plied on this river back in the time. The river is a butt of jokes in Chennai but isn’t it sad that our civilisation is growing at the expense of our natural resources?

We had a plan to visit the Parthasarathy temple at Triplicane – one, it is a beautiful temple and two the Adirasam and Sweet Pongal prasadam is a world beater ! However, we lazed around that morning and couldn’t make it to the temple.

After a king’s breakfast at the hotel, we were all set to begin our journey to the land of the Cholas.

Leave a Reply to A French Note Cancel reply