If there is one place that deserves the name “Temple Town”, it has to be Kumbakonam. We were told that within Kumbakonam administrative limits, there are about 180 temples, all atleast 800 or more years old. Steeped in ancient Tamil culture and history, this city has been inhabited right from the Sangam Age, we are talking about some 2000 years !  During the Chola times, Kumbakonam was also known as Kundanthai and was probably an important cultural centre with the first Chola capital of Pazhayarai located very close to Kumbakonam.

It was a very pleasant morning in our homestay, a traditional, Kumbakonam house. We took a quick walk to a nearby tea stall to have coffee. Though we weren’t served the authentic Kumbakonam Degree coffee, we were given coffee in a glass, double the size of the tea/coffee glass we are used to in Hyderabad for almost the same price !

Since we were travelling with 2 young kids, during this trip, we decided to start our daily tours after 9 AM, so that the kids have enough time to wake up and get ready. We set out at 9 AM, the first on our list of temples for the day was the Airavateswara Temple at Darasuram. Before that, we had to have Pongal for breakfast, we stopped at a hotel enroute Darasuram, we won’t say more about our love for Pongal and sambhar !

Completing the trilogy of the Great Living Chola Temples, is the Airavateswara Temple at Darasuram, built around 125 years after Gangaikondacholapuram, in 1162 A.D by Raja Raja Chola II. The Darasuram temple is a masterpiece, the outstanding example of Chola architecture and sculpture.

This was our second visit to the temple, the last time we visited it in 2009, it was raining heavily and we couldn’t spend much time at the temple.

Unlike the gigantic Vimanas of its predecessors, this one is modest but follows the same architectural style. At the entrance is the gopuram and a few steps lead you down to the entry, where you can see the Nandi Mandapam and the Bali Peetam.

The Bali Peetam has 7 steps leading to the a pedestal for Lord Ganesha, these stone steps are supposed to produce sound of the Sapta Swaras. They are now protected by a metal enclosure as you can see in the picture. Honestly, we did not know about the Sapta Swara steps until we read about it on the internet later, we would have clicked a better picture if we had known. Goes to show how little information we have about these marvellous works of architecture.

From the entrance, you can also see the ruined Gopuram, only the base remains, this must have been the original entrance to the temple. 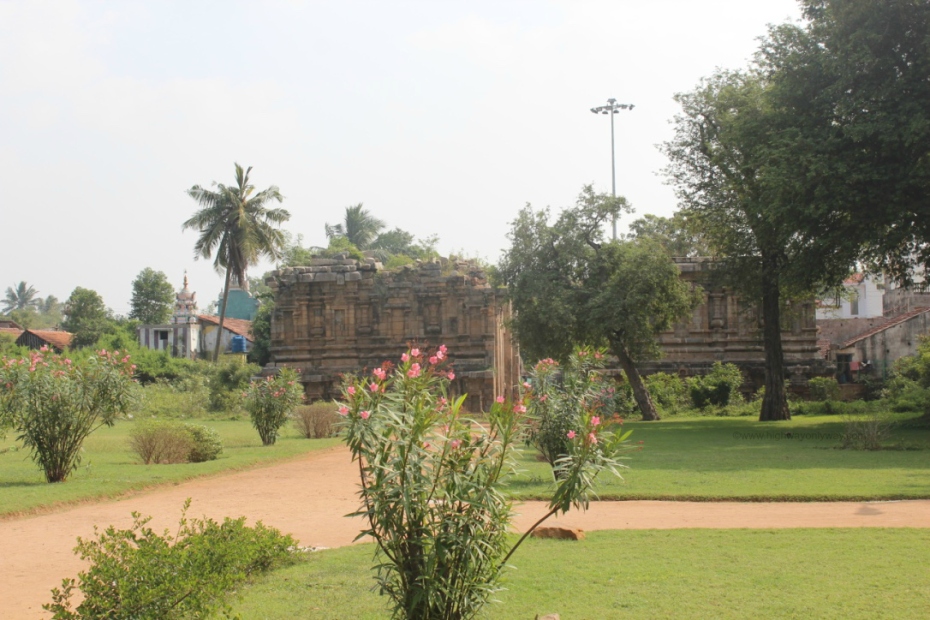 When you step inside the temple premises, you realise the modesty ends with the height of the Vimana. The Airavateswara temple is one of the most exquisitely sculpted temples in India, the Chola architecture and sculpture reaching its peak and at its best !

There is richness of sculpture everywhere, starting with the mandapa at the entrance, which is designed like a chariot. The mandapa has pillars being supported by the mythical animals called Yali.

The Yali here is has multiple animals combined to form a mythical animal, an elephant, bull, horse, lion, ram, pig, all sculpted to form a single animal and the parts of different animals blend in perfectly.

Begin your tour of the temple by taking a walk along the corridors, marvelling at the precision of the position of each pillar, the alignment is just perfect, we are talking of hundreds of pillars and not one is out of alignment !

This is something you will find in every temple and it is a wonder how they managed to do it right every time !

From the corridors, you can view the sprawling premises of the temple, the more you stand and gaze, the more you are wonderstruck at the architectural skill of our ancient craftsmen and builders. 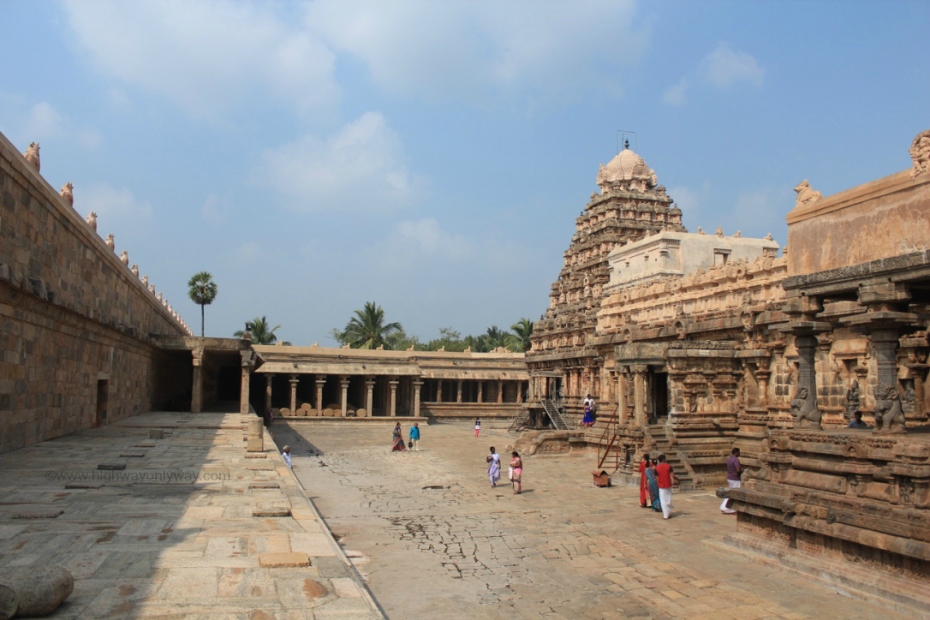 The view of the temple complex is picture perfect, we tried to get a little creative (so we think !), trying to frame a view of the entrance from between two pillars.

The Vimana and structure is a scaled down version of the Thanjavur and Gangaikondacholapuram temples. We also spotted some Chola era paintings on the walls of the Vimana. 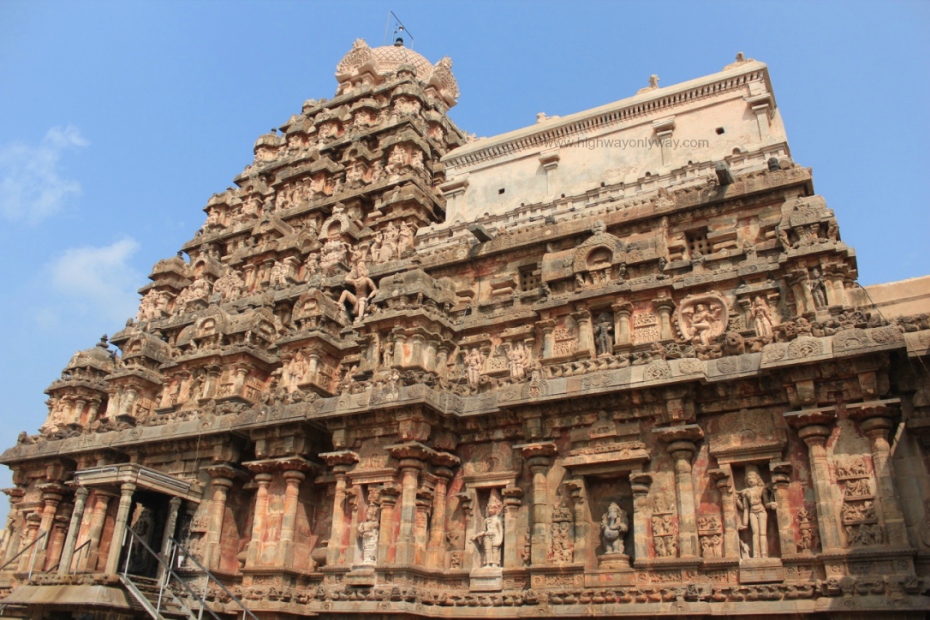 When you step inside the main shrine, you will first find yourself in a pillared hall. Beyond the pillared hall is the Sanctum where Lord Shiva in the form of Airavateswara resides.

After the darshan, turn your attention back to the hall and you will be boggled to find rows and rows of pillars, each pillar drenched in sculpture !

The sculpture has varied themes ranging from Bharatanatyam,

to stories from Puranas and epics, here is Lord Shiva in a procession.

Some figures are hardly 2-3 inches but every detail including features and jewellery is intricately carved, it is difficult to capture those miniature sculptures on the camera, the mandapa is dim lit and the figures too tiny to get a good picture.

Then you have some more creative sculptures like this one. 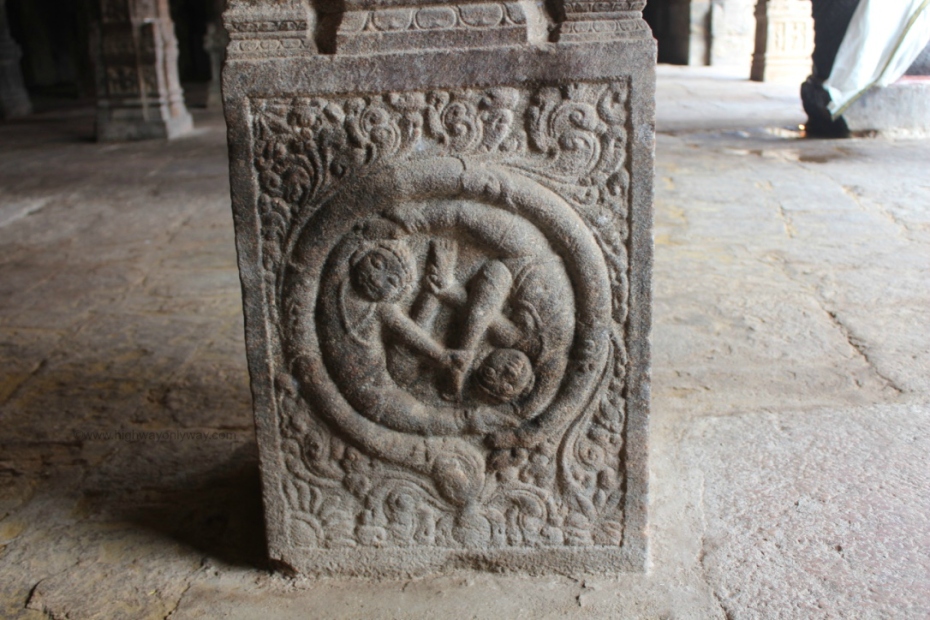 Closer to the Sanctum, the hall is almost devoid of light, except for a few rays of sunlight streaming in through the vents on the wall, the effect is magical ! 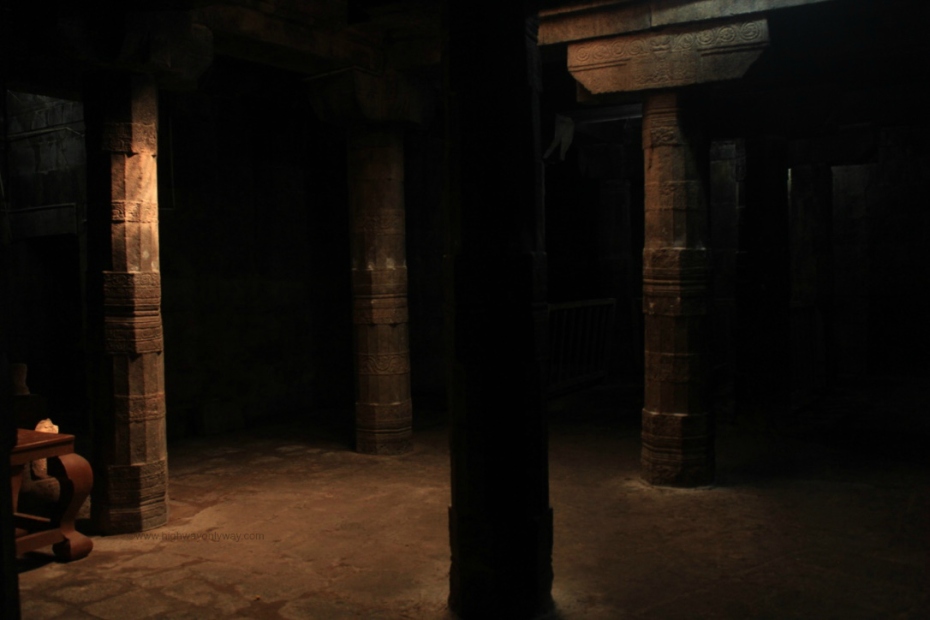 We then, stepped out into the court yard and took a stroll around the temple, every bit of the temple is an artwork par excellence.

After spending an hour of telling ourselves how lucky we were to be able to see all these architectural wonders, we decided it was time to move to the next destination. This writer, however, was not satisfied because we had not been able to spot the creative sculpture that became a favourite of ours after our previous visit to Darasuram in 2009.

So, we took a walk again around the entire temple, looking for sculptures near railings of steps, it was like a thriller novel where the hero goes looking for a particular carving in some ancient monument !

After an entire Pradakshina, we finally spotted the sculpture we were looking for, tucked away underneath the railing of steps leading to the corridor to the right of the main temple.

Just see how perfectly two animals have been blended into one. How did the sculptors come up with such ideas? Was it entirely random ideas or did they have a plan?

This is seems to be a popular sculpture and has been replicated in other temples across south India, especially in temples built by Vijayanagara kings. We have seen this in a couple of other temples too but all of them are dated after the Airavateswara temple. So, was this the original or this too was replicated from elsewhere? We will never know because there are hundreds of ancient temples in South India alone and almost all the temples are rich in sculpture, kingdoms have come and gone, these temples have been renovated and restored over the centuries. What were their stories?

We left Darasuram with this image of the temple. 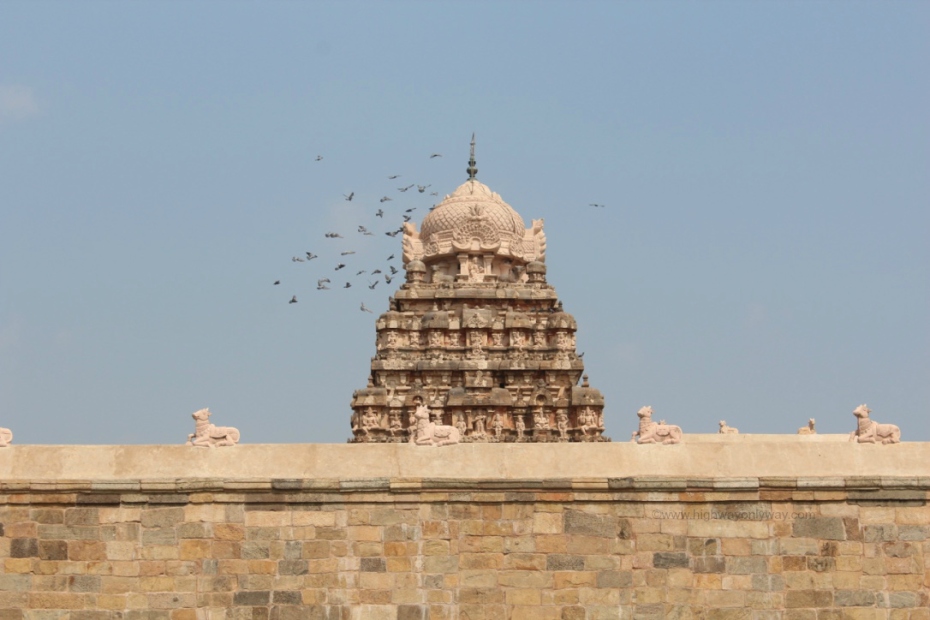 We repeat this often but we will say it once more because it is a recurring thought, how fortunate we are to be part of a heritage such a this !