This year around Ugadi time, we randomly decided we wanted to go somewhere (it’s another thing that we are always on the “we want to go somewhere” mode) but since our travel partner had to work, even if it was remote, we couldn’t go any place that did not have an internet connection. In situations like these, we always have our hometown Nellore to fall back upon. Ugadi fell on a Wednesday but we decided to take the intervening Monday and Tuesday off and make it a work from home holiday. Just to give it a feel of a trip, we were going to stay at our all time favourite spot, Nagarjuna Sagar before heading to Nellore.

We started to Nagarjuna Sagar on the Saturday afternoon before Ugadi after watching an absolutely non-sensical Telugu movie. We were taking the Nagarjuna Sagar route after a long time and were quite surprised to find a 4 lane road till Ibrahimpatnam but the traffic was quite heavy and it took us more than 3 hours to reach Sagar.

Checking into Vijay Vihar, Telangana Tourism’s resort at Sagar, we had a relaxing evening. If you are looking for a quick getaway from Hyderabad, head to Nagarjuna Sagar. Even if you have been here a 100 times, the place will not bore you.

Mornings are the best time at Vijay Vihar, you can wake up early in the morning freshness and watch the Krishna River from the comfort of your balcony. 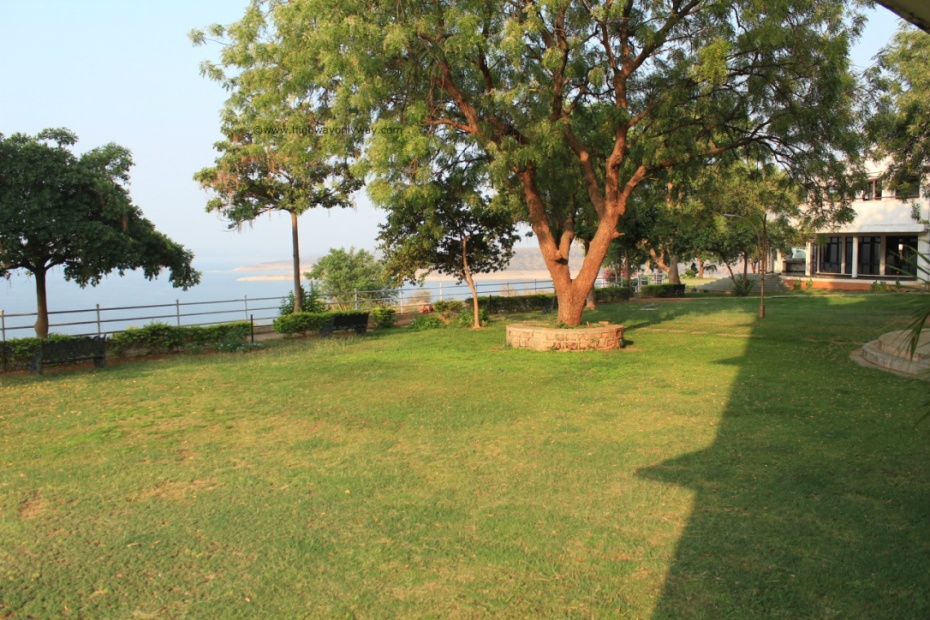 The waves of the Krishna River quietly flow upto the dam and then seem to turn back. Not for once should we think that we have managed to harness the river, when the day comes, the river will be too hard to control and we will have to bow down, open the gates and let the mighty river pass !

After a leisure time at the resort and a nice complimentary breakfast, we checked out and headed towards Anupu, a place that has been on our “to visit” for far too long. Anupu is about 18 kms from Nagarjuna Sagar on the banks of the Krishna, where ASI has reconstructed the ruins of the university and Buddhist monasteries that was established under Acharya Nagarjuna, the celebrated Buddhist teacher, philosopher and an expert in chemistry or Ramayana, as it was known in ancient India.

This was our first visit post Telangana and we were quite amused to find a new boat launch station to Nagarjuna Konda on the Telangana side in addition to the old one, which is now part of Andhra. Technically, the Nagarjuna Sagar dam is part of Telangana and everything else on the other side bank of the river is Andhra !

Enroute Anupu from Hyderabad, one has to cross the Krishna River, this bridge is always awe inspiring.

As is this human engineering marvel, the Nagarjuna Sagar Dam.

It took us about 30 minutes to drive to Anupu on a single road that was slightly away from regular traffic and which leads you directly to the archaeological site with a view of the Krishna river in the distance.

This road directly leads to the Krishna River, the ruins are located on either side. The road ends near the river and from there a stony path takes you close to the river bed. Since this is the Pushkaram year for Krishna River, the government has built ghats and a few facilities.

The river, of course, flows quietly, unmindful of the Pushkaram or the constructions, it has done so for eons and would continue to, we just hope the humans would let it ! 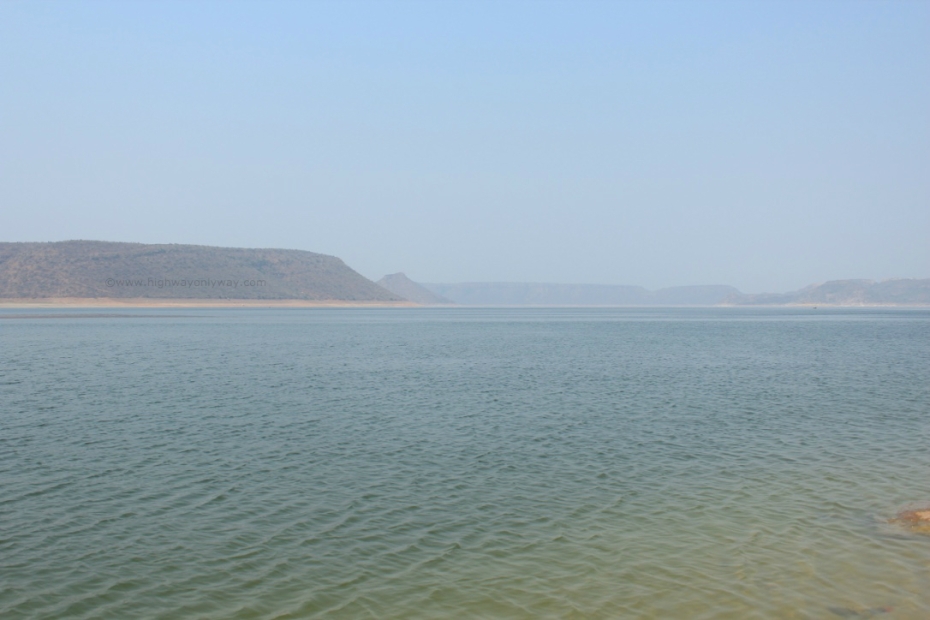 We drove to the main archaeological park and walked around. Anupu, as we, mentioned at the start of the blog, houses the remnants of the Buddhist monasteries and university that thrived under Acharya Nagarjuna. By that, we are talking about the 1st-2nd Century A.D.

These ruins were originally located in the Krishna Valley and were under the danger of being submerged when the Nagarjuna Sagar Dam was built in the 1960s. ASI carefully removed the ruins and reconstructed them at Anupu and some more at Nagarjuna Konda. This is called Salvage Archaeology.

The archaeological site at Anupu is very well maintained. One can find the ruins of the quarters for monks, students, meditation centres and Stupas. 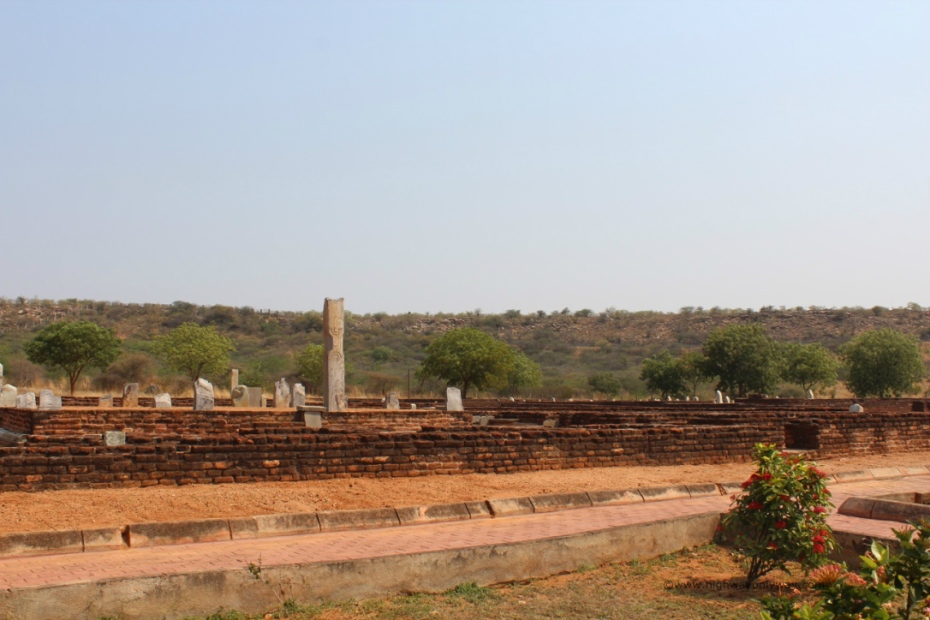 This was probably a meditation cubicle.

Not very different from our modern day cubicles, isn’t it? If only we could meditate in ours and find some peace !

A short distance away is the most interesting part of Anupu, the amphitheatre.

Inspired by the Roman amphitheatres, the one at Anupu could go down as one the oldest amphitheatres around the world.

The amphitheatre belongs to the 3rd or 4th Century A.D, so 1700 years ago, these bricks must have witnessed many a sporting event !

There are steps and a ramp leading to the top of the amphitheatre. It was a hot, sultry day and climbing up these steps left us breathless. From here, you get an an absolutely breathtaking view of the Anupu ruins, hills and the Krishna river.

Add blissful silence to this scene, you really would want to become a monk !

At the top, there are more ruins, this must have been some kind of a pillared hall. 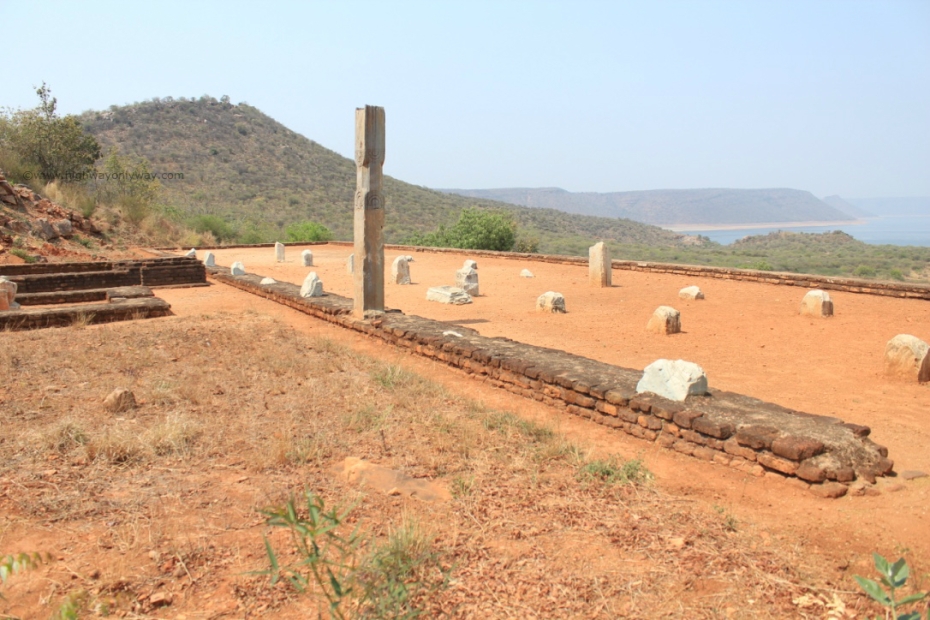 This lone pillar alone seems to have withstood the test of time. 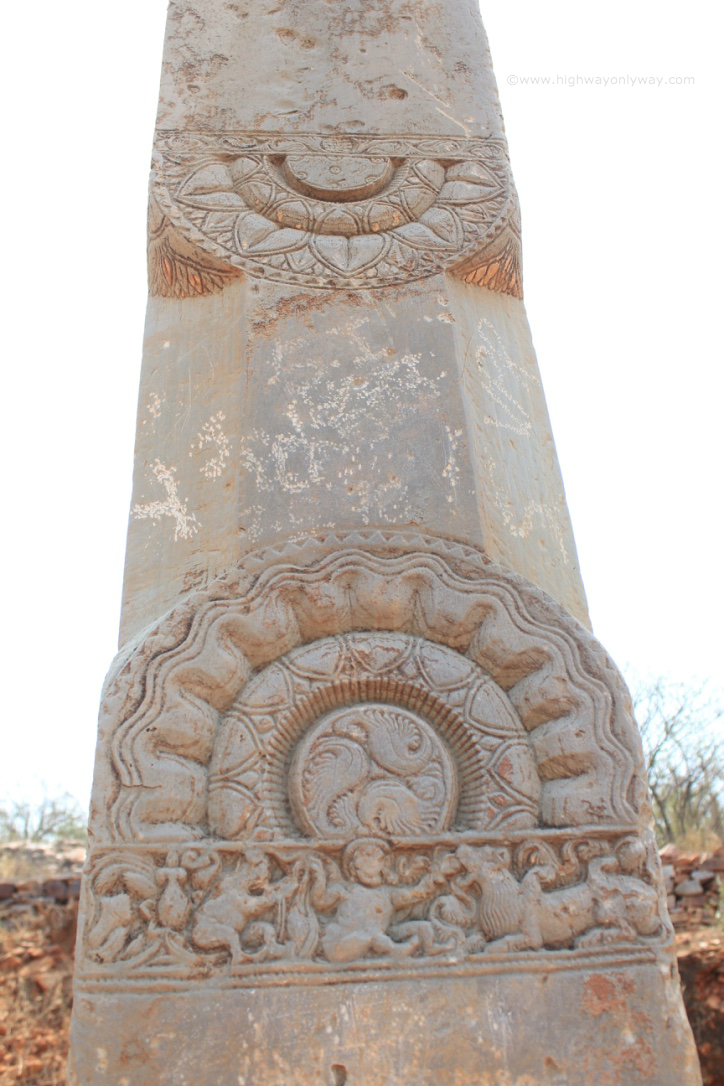 There is a broken statue of a Goddess, identified as the Buddhist Goddess Harathi. 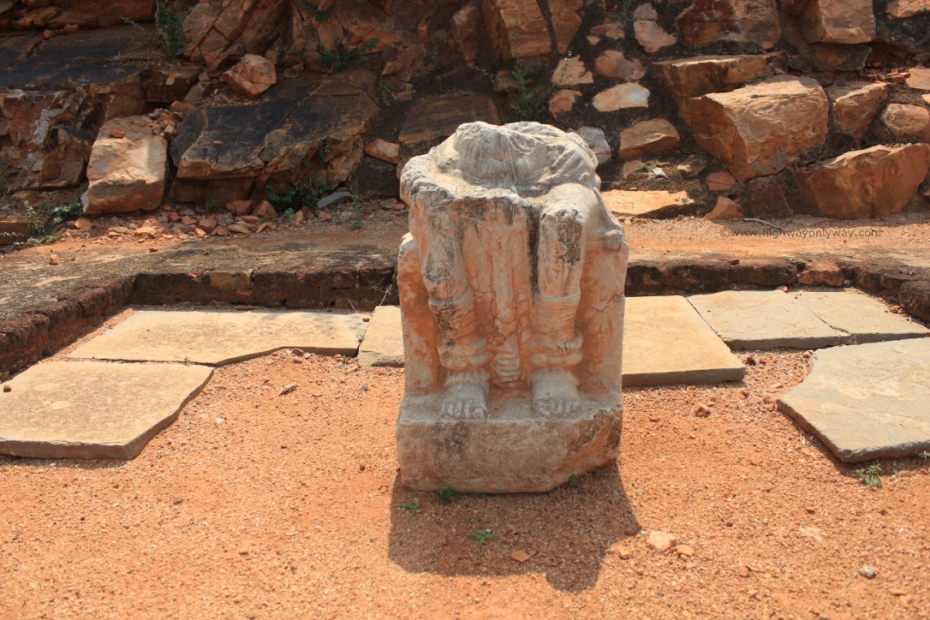 These ruins including the pillars must have been part of the temple dedicated to the Goddess.

We would have spent the whole time gazing at the Krishna and imagining Buddhist monks holding philosophical and scientific discussions with Acharya Nagarjuna but we had the present day to take care of and we left Anupu, in wonderment, one more time, at the ancient world. Today’s Acharya Nagarjuna University in Guntur was named after this legendary Buddhist teacher.

Siva-Vishnu, 2 sides of the same coin

We resumed our journey to Nellore through Macherla, stopping by for a quick visit to the Chennakesava Temple.

Macherla, has an important role in the history of Andhra, being the centre stage of the “Palanati Yuddham” or the Battle of Palanadu dating back to the 12th Century A.D. You could call it the Kurukshetra of Andhra history, with brothers up in arms, cock fight gambling, exile and a great war which resulted in the entire royal family of Palanadu being wiped out. Stories of Palanati Brahma Naidu and Nagamma, the main characters of this historical event, were part of every Telugu student’s growing up years.

The Chennakesava temple at Macherla is believed to have been built sometime in the 1100 A.D. The structure that stands today, of course, must have been subjected to renovations and restorations.

The ancient structures have been whitewashed too !

The real antiquity is visible inside the temple, one can see the ancient pillars and the exquisite sculpture.

In the courtyard, there is a slab with inscriptions, probably detailing the grants, history of the temple.

The story of the temple is that, it was originally a Saivite Temple which was converted to a Vaishnava temple by Palanati Brahma Naidu.

Adjacent to the Chennakesva Temple is an older temple dedicated to Lord Shiva.

This, we were told was the original part of the temple before it was expanded by building the Chennakesava temple. Keeping with the Saiva-Vaishnava debates, a wall was built between the two temples and they were made two separate complexes ! 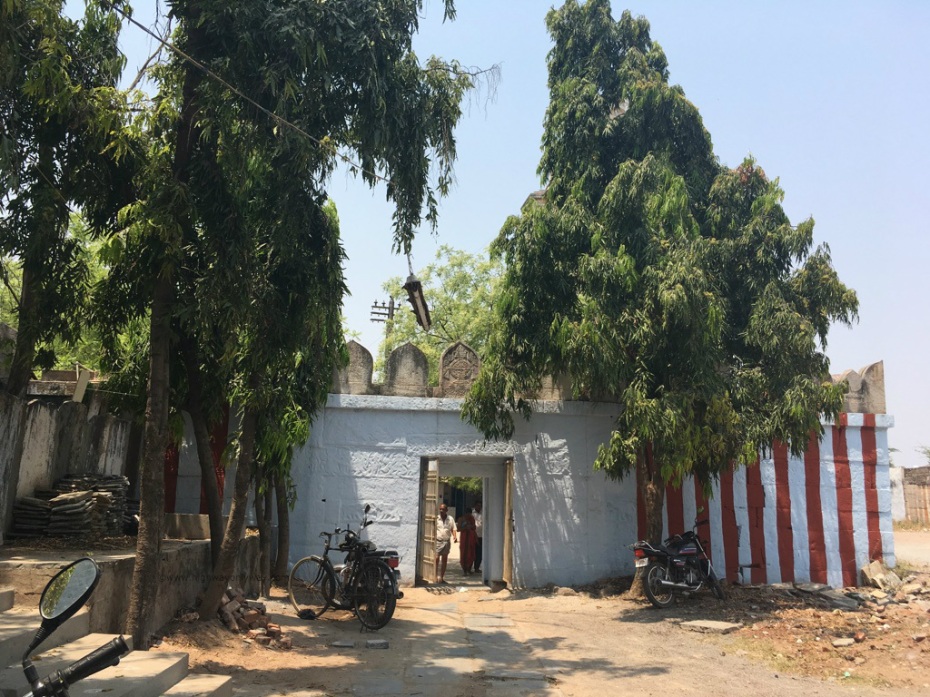 Funny how from time immemorial, difference of beliefs was always a matter of strife ! In fact, some people believe that the Palanadu Battle was also a feud between the Saiva and Vaishnava believers because Nagamma, was supposed to have been a Saivite.

There was hardly anybody in both the temples and the priest showed us around patiently and told us these stories of Macherla. Any student of Telugu in the 1980s would have read the story of Palnati Yuddham as part of their curriculum and we were able to visualise the stories.

We left Macherla and headed towards Karempudi where the actual battle took place. The place is on the highway and one can also see the “Veerula Gudi” where the weapons used in the battle are still preserved and a festival is celebrated for 5 days during the month of Karthika every year. The temple is right beside the road in Karempudi town, however, we did not stop to visit it as we still had a 5 hour journey to Nellore.

The journey time, though, did not deter us from stopping by to click pictures of the “Guntur Mirapakaya”, the famed spicy, hot, red chillies of Guntur.

Fields of bright red Chillies stretched beside the road, you could almost smell the spice !

The rest of our drive to Nellore was as enjoyable as ever. After 4 days of vacation at home, we returned to Hyderabad on the same Nagarjuna Sagar route on Ugadi Day. We stopped at Vijay Vihar once again, this time for lunch and were quite surprised when we were served Ugadi Pachadi.

Notice how Telangana Tourism is serving Ugadi Pachadi in AP Tourism’s cup. Ugadi is a Telugu festival and nothing would be more symbolic than this !

This trip will always remain memorable as it was our last trip with our Figo. A few days after the trip, we bid goodbye to our first and best travel partner, our Figo. The car had been our buddy for 6 years and we shared a bond over 1,40,000 kms ! 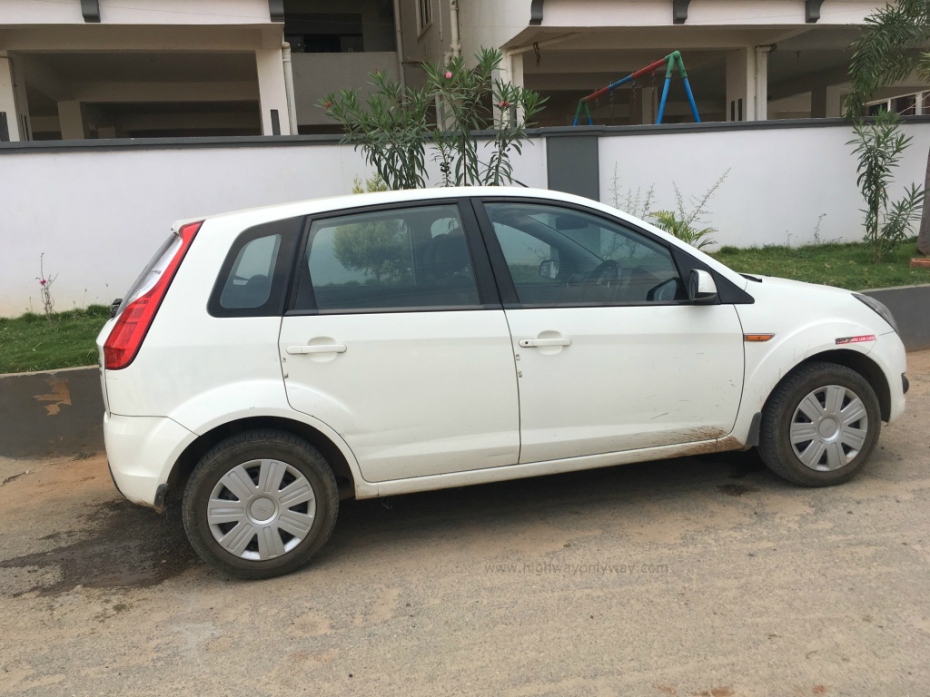 It was time to get a new beast but the old one will remain gold forever !