We would like to take a moment to introduce the new member in travel team !

This guy joined us in May 2017 and we look forward to covering many miles and years together !

Summer months are usually lean travel months for us, with no holidays and heat beating down in every part of the country. Added to that, this year in June, our Chief Driving Officer travelled to USA for a couple of weeks as any IT professional worth his salt would !

Even as the monsoons gave a respite to the heat in July, there didn’t seem a way out of our work schedules, so, one Sunday in July, we decided we had to give a hot-fix to this problem and head somewhere. It started with big brunch plans but we ended up snacking at Subway and then hit the road towards Patancheru. We had no idea where to go when we spotted a hoarding by Telangana Tourism promoting Manjeera Crocodile Sanctuary and we knew where we wanted to go !

Driving on the Medak road, we crossed the Musi River or Muchkunda as it was originally called. This old bridge across the river gave it a scenic look. 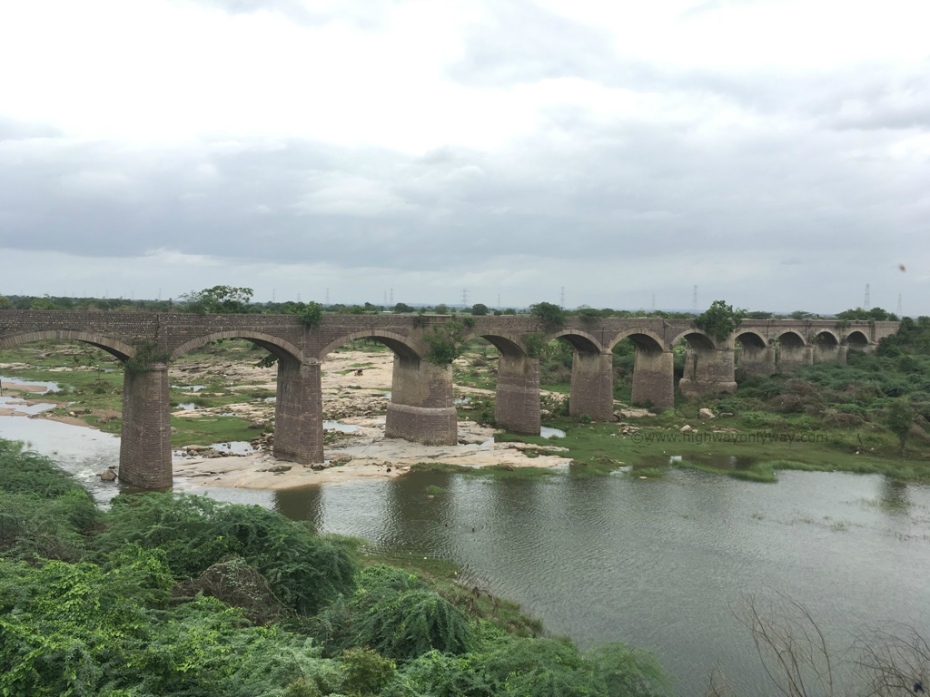 The Manjeera Crocodile Sanctuary is located near the Manjeera Reservoir. We followed Google Maps sincerely and found the reservoir gates at a distance. Driving further, we arrived at a village and as always, we ended up on a dirt track that led nowhere ! The villagers guided us to go back all the way some 15 kms and then take another road which would lead to Manjeera Dam. As a principle we do not get annoyed at Google Maps, considering the memorable adventures we have had thanks to it !

The Manjeera Barrage wouldn’t make you go wow but it is always pleasant to be near a water body.

There was a lovely, cool breeze, we spent a few silent moments enjoying the breeze and the sight of the reservoir and the clouds gathering over head.

We, then, turned towards the Crocodile Breeding centre. The short stretch between the barrage and the breeding centre was lush green, it looked like a mini forest. 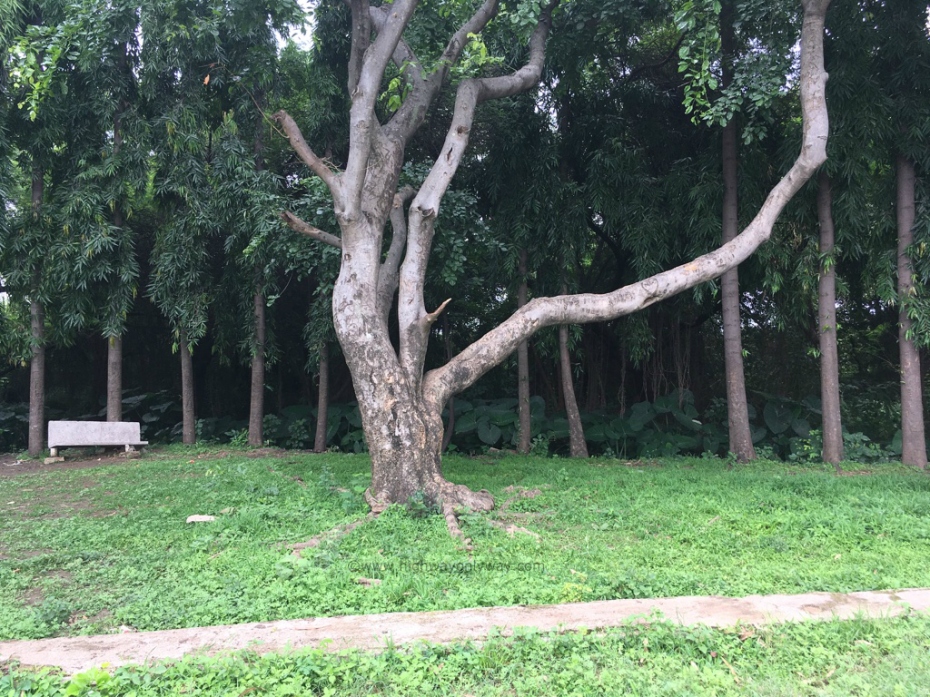 There were a few benches to sit and enjoy the views. Some people had set up an outdoor picnic and were busy cooking something delicious ! It was drizzling lightly and the overcast sky added a deeper shade to the greenery around.

The Crocodile sanctuary is located near a eco-centre giving information about the flora and fauna of Manjeera Wildlife Sanctuary, the Crocodile Breeding centre is supposed to be a part of it.

A small, well maintained garden leads you to a pond where the reptiles rest. Beside that is a mini zoo with a few birds including pheasants, parrots and a peacock.

We moved to the pond to see the Crocodiles. There is a board with information on the Mugger Crocodile that is found in the Manjeera Reservoir. These crocodiles were on the verge of extinction at the time the Manjeera Crocodile Sanctuary was set up in the 1980s. Thanks to the Manjeera Sanctuary, the Muggers have a safe haven.

When we first looked at the pond, we could spot only 2 crocodiles and as we gazed, we could spot several tiny ones. We did not carry our camera, so we were not able to get good pictures.

While the big ones lazed in the grass, the baby crocodiles seemed to be testing the waters, some were lying with their mouths open, some were crawling towards the water, some were just motionless.

There was a second pond, where some more small ones were learning the ropes of life. Some were so tiny that they looked like a garden lizard ! Here and there, we would spot a ripple in the pond and realise it was actually a baby crocodile swimming. Some would crawl near the water and stop, as if to check if it was safe.

Initially, we thought we could count the number of these crocodiles but even as more emerged from the bushes and the grass, we lost count.

We spent about half an hour watching the crocodiles and as we were about to leave, we suddenly noticed this guy ! Can you spot him?

Hidden behind the bushes with its mouth wide open, we initially mistook the crocodile for bark of a tree, it was only on closer examination that we realised that it was a fully grown Mugger, trying to cool itself. This is why a crocodile keeps its mouth wide open. We read that because they do not have sweat glands, by keep the mouth open, a crocodile cools it body heat !

This casual trip turned out to be more than we had expected and as it began to rain lightly, we left Manjeera Wildlife Sanctuary and returned to Hyderabad. Enroute, we passed by the Narsapur forest area. If you are looking for a lovely drive amidst nature close to Hyderabad, head to Narsapur forest. 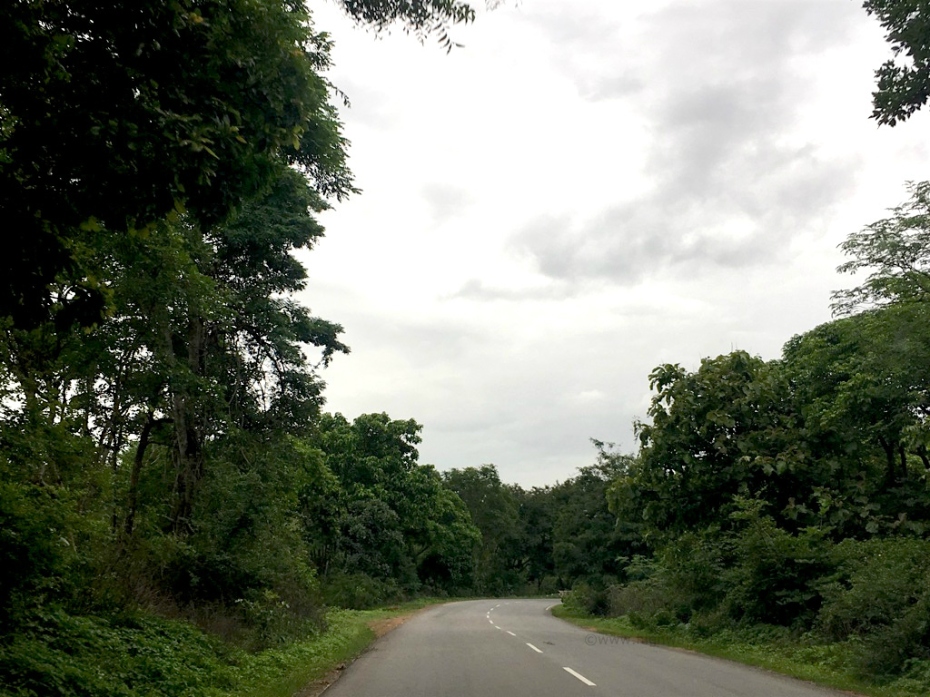 Try it on a rainy day, you will love the experience. Just be careful of the hundreds of monkeys on the road, people throw food at them and these monkeys have got used to roaming on the roads in search of food.

This trip was yet another proof that the destination doesn’t matter, just travel and add more moments to your life.

2 thoughts on “A quick fix trip to Manjeera Crocodile Sanctuary”