We opened our eyes on Day 2 of our Vizag trip to this view by our bed. 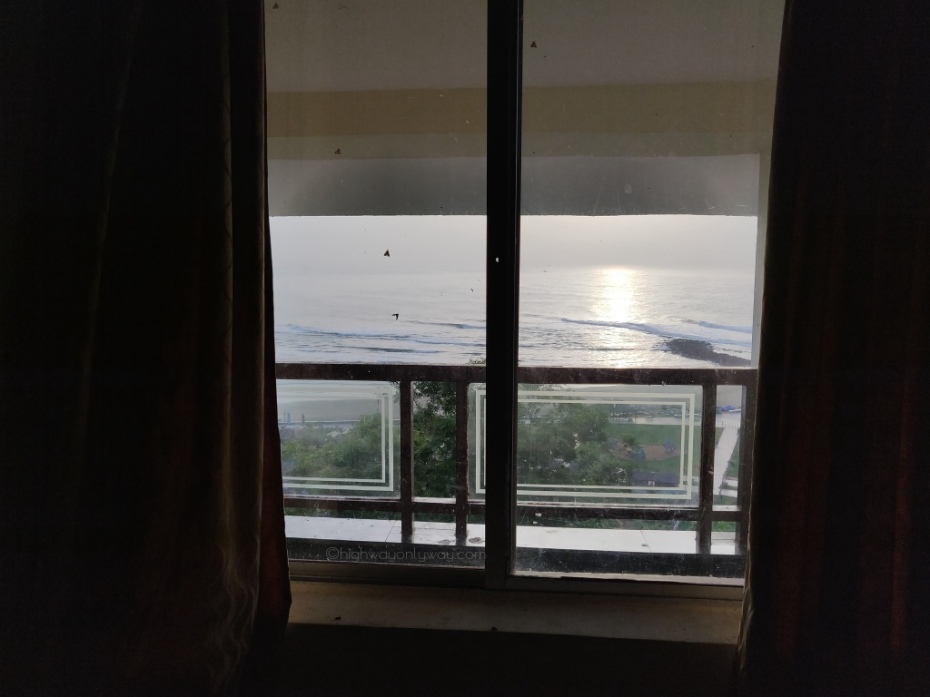 We wanted to catch the sunrise by the sea but it was already past sunrise when we woke up, sometimes one can trade the sunrise over the sea for a much needed sound sleep. Anyway, most of the time near sea coasts, there are clouds in the horizon exactly at sunrise. Whether you watch the sunrise or not, views like these will give you all the positivity you need, that is why, holidays amidst nature are a must ! 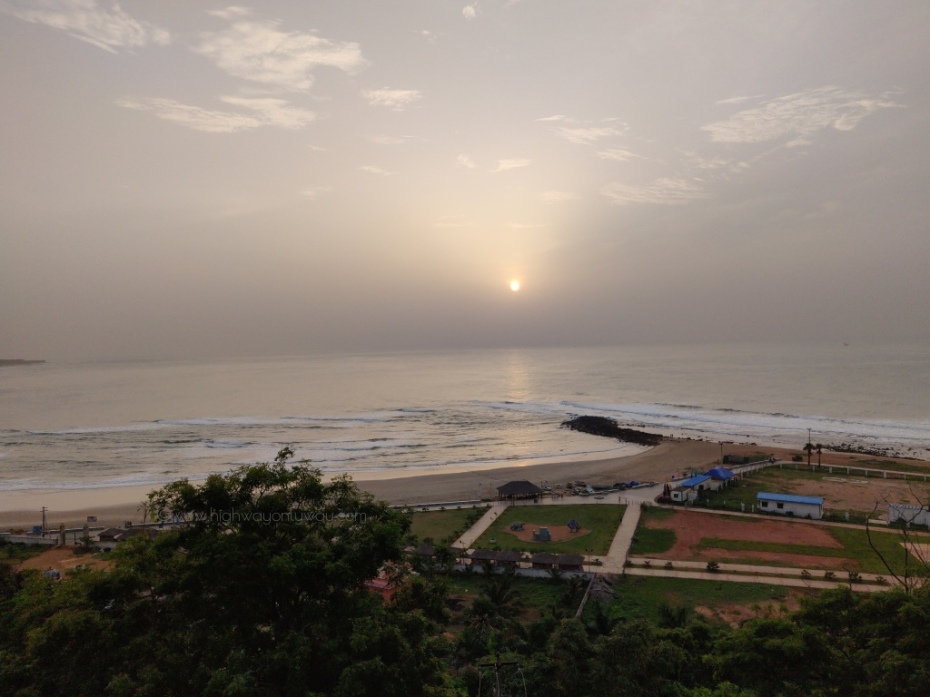 After lazing with family for a while, we went to the resort’s restaurant for breakfast, Idly, Dosa, Upma, Vada – the usual fare, it was decent. Soon, it was check out time and we packed our stuff and left Rushikonda. If you are looking for a simple, economical beach resort with some lovely views of the sea, head to Haritha Beach Resort at Rushikonda.

The first half of the day was spent on some personal work in the city outskrits. While returning, we passed by Simhachalam and stopped for a quick visit to the shrine at the entrance of the ghat road which houses the replica of the original idol at the Simhachalam temple. One can see the half Varaha, half Narasimha avatar merged to form Varaha Lakshmi Narasimha Swamy.

Lunch time set in by the time we drove into the city and the family wanted to have a proper, hearty Andhra Meal. The sibling, who travels to Vizag on work frequently, suggested Tycoon Multicuisine Restaurant and what a feast it was ! Of late, we had been dissatisfied with meals, especially Andhra Thali served in most restaurants in Hyderabad, the taste seems the same in every restaurant and hardly any of the dishes live up to the claims of “authentic Andhra” but the Thali at Tycoon was so good, at the end of it, we thought we were going to explode by over eating and with happiness ! That’s what good food does to most people.

Swimming in the rain

A corporate card had given us a discounted stay at Novotel’s Varun Beach hotel on the Ramakrishna Beach. That was our next check-in place. The best part of Varun Beach hotel is that all rooms face the sea. The moment we stepped into the room allotted to our parents, we were speechless !

The room had the most amazing view of the Ramakrishna Beach Road and the hotel’s infinity pool. All the rooms have such great views but the ones in the centre part of the building have the best view.

We stretched ourselves beside the window and spent the afternoon chit chatting and watching the waves. By 3 PM, dark clouds gathered over the horizon and we wanted to take a swim before it could start raining.

We got the kids ready and just as we stepped into the pool, the sky opened up and it rained buckets ! We were in an infinity pool overlooking the sea, in pouring rain, heavy winds and dangerously loud thunder and lightning in the background. We could not even not keep our eyes open because the rain was hitting us hard, when it got very heavy, it almost felt like someone was pelting stones at you ! The hotel attendants asked us to be careful as the strong wind was throwing the lounge chairs around, the pool umbrellas were flying ! It was frightening yet beautiful. Another interesting thing was while the pool water was cold, the water from above was nice and warm, we could feel two different temperatures of water at the same time. We did a few laps in the rain, total fun !

There was nobody else in the pool and people were looking at us like we had gone mad, for us, it was one of the most thrilling experiences of our life and probably a once in a lifetime one.

Being rule abiding citizens, we were thinking of leaving because the hotel guys were requesting us not to stay in the pool in such heavy rain but thankfully within 15 minutes, the rain subsided and everything returned to normal. For the next 2 hours, we did not step out of the pool, swimming and just relaxing in the pool.

By 5 PM, we decided we had enough cardio exercise for the day (that’s what one thinks when they are short of breath because they hardly ever exercise !), it was time for coffee and a long walk along beach road.

We walked the entire length of R.K.Beach Road, alive with food joints, food trucks, cafes and people having a good time. As the sun set, we took the kids on a quick tour of the INS Kursura Submarine Museum. We had visited the INS Kursura during our previous trip to Vizag in 2016, you could read about it here. That was followed by a visit to the TU 142M Aircraft Museum opposite the submarine where they have exhibited the aircraft that was part of the Indian Navy for 29 years. 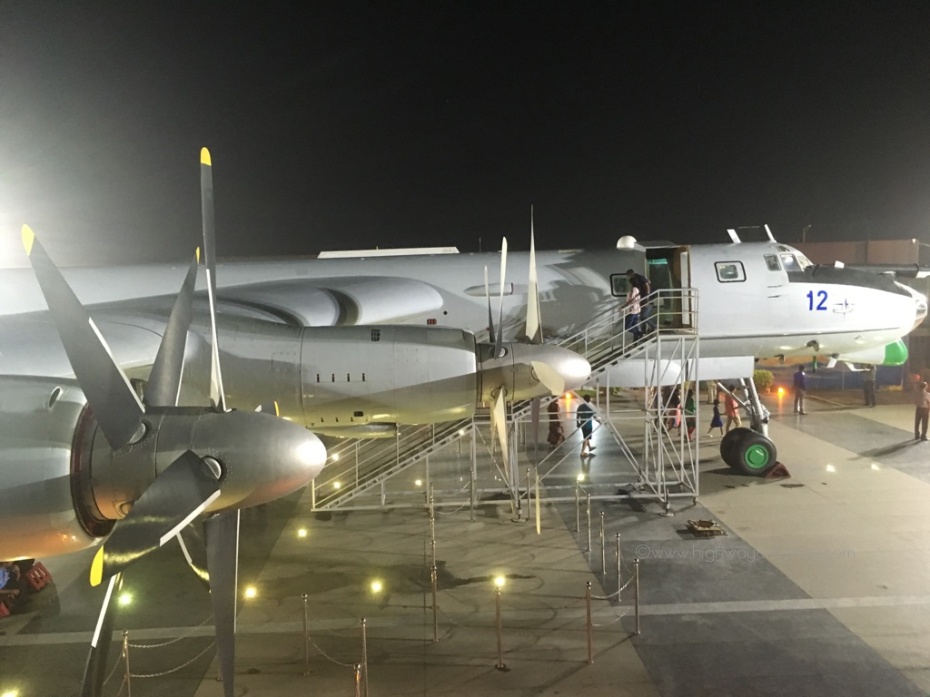 Photography is not allowed inside the museum, we could only click the aircraft from outside. The aircraft is so huge that one cannot fit the entire aircraft in one picture unless you use a panorama effect !

One is always in awe of the Armed Forces, one way of expressing our gratitude for them is to be responsible citizens and do our bit to build a better nation.

Dinner time approached and we headed to the one place everyone said was a must visit in Vizag – Sri Sairam Parlour, the most popular tiffin centre of the city. True to its popularity, even as early as 7 PM, the place was teeming with people, luckily we found a table. With 8 people, the order simply over flowed, from Idly to Dosa, Ghee Karam Dosa, Puri, Chana Batura, Fried Rice and a lot more that we have now forgotten ! The place lived up to the expectation in every way, we were bowled over by their spicy chutney. With three generations of binge eaters, we suppose it runs in our family !

We were back at the hotel by 9 PM and sat by our favourite window and watch the city lights, the illuminated pool and the dark sea. 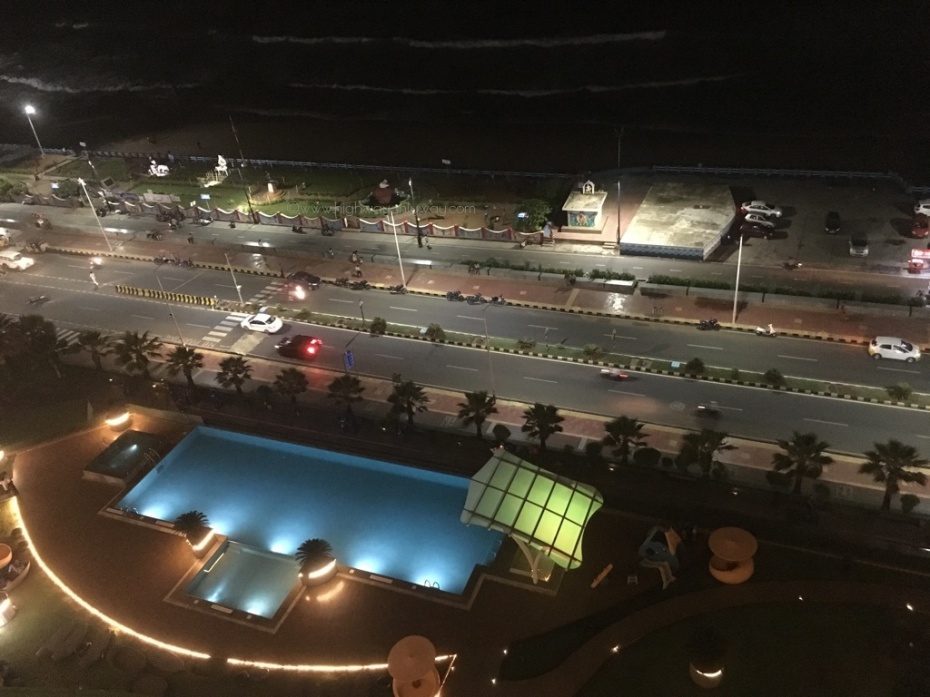 An hour later, we went to the terrace of the hotel, they have a roof-top restaurant and also a walking pathway along the terrace. It was another pleasant experience we had at Novotel Varun Beach, a night stroll on the terrace watching the beach below.

There are some nice lounge chairs on the terrace, we spent some time on family talk before an entire family of mosquitoes began to feast on us !

We called it a day by 10 PM, it struck us that we spent the entire day just watching the sea and we were already making plans for a morning walk by the beach the next day !