When it is time for a vacation to end, we are usually in sulk mode but this was one vacation that had us excited as it drew to a close. We were going to take a ride home to Hyderabad on the Hazrat Nizamuddin-Secunderabad Rajdhani Express, First AC ! Delhi to Hyderabad by train is always considered enjoyable and we wanted to add an extra dose of fun by travelling in First AC, a first for us, we threw caution to the wind and indulged ourselves. The ticket turned out to be costlier than a flight ticket !

Since we booked tickets well in advance, we managed to get a coupe, it looked like a mini, mobile hotel room. 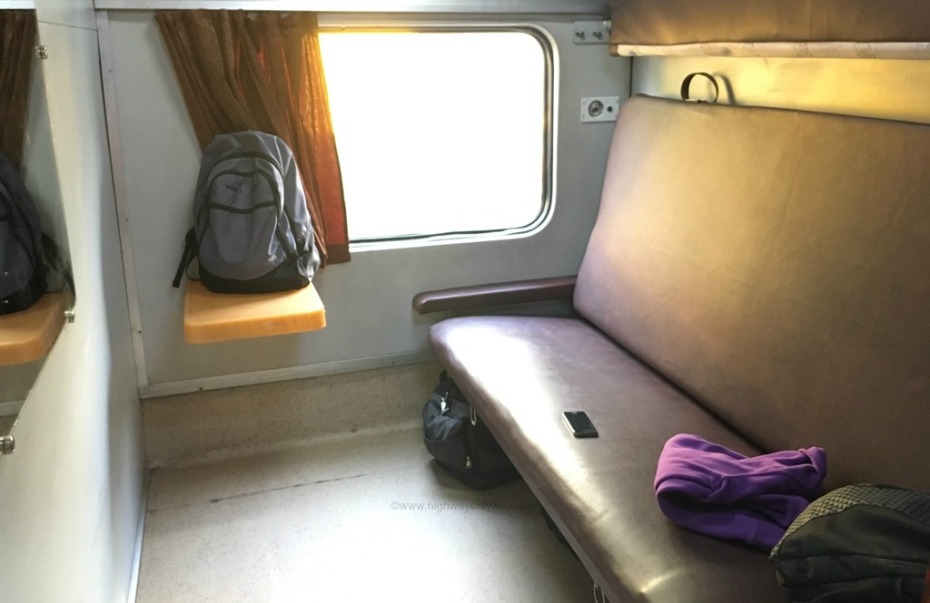 The train started on dot at 3.55 PM and we settled in feeling like some VIP travelling in a train. Within a few minutes, there was a knock on the door, our tea was ready ! Hot milk and dip tea served with biscuits. It was exciting but some where we missed the Chaiwala and the chants “Chai, chai, Chai garam”.

Sipping on our evening tea, we watched fields and villages pass by our window. A message on our mobile welcoming us to Rajasthan told us we were somewhere near the Rajasthan border. Just before sun set, the train reached Agra and like excited country people, we tried to see if we could spot Taj Mahal from the train !

We read a book, stared outside the window, chatted, even dozed a little and shortly after 7 PM, it was soup time ! Hot tomato soup. Our attender, very proudly announced that he would disturb us again at 8 PM with our dinner. The guy probably didn’t know, the very reason were on that train, travelling First AC was for the food !

Dinner included Roti, Paneer and Dal, curd which was finished off with ice cream. For railway standards, the food was really good.

Around 8.30 PM, the train stopped at Jhansi Junction, we stepped onto the platform, just to have it on record that we set our foot in Jhansi, Madhya Pradesh !

We settled in for the night early after reading for sometime under the reading light attached to the berth, this was one of the fun things. For someone who travelled in 2nd Class or at the most 3rd AC so far, this was really a big deal !

The only major complaint we had were the washrooms with bio-toilets. Somehow, our folks don’t seem to be able to get a hang of bio-toilets. Either they have not been installed properly or there is something wrong with the functioning or our fellow citizens don’t understand how to use one. If there is a malfunction, bio-toilets are scary ! With the government planning to go green with bio-toilets on all trains, we shudder to think how nightmarish it is going to be, especially considering our world renowned poor sanitary culture !

We slept through the night, with no disturbance, we did not have people boarding the train at midnight and switching on all the lights and shout around looking for their seats ! We could not hear the announcements which jolt you from your sleep, if you want to know how that feels, travel in 2nd Class by a train that reaches Vijayawada after midnight ! By the time we woke up, we were had crossed Nagpur junction.

We sat by the window watching the day break and listening to M.S.Subbulakshmi’s rendition of “Sriman Narayana”, in moments like these you realise that Sriman Narayana is the beautiful sunlight, the divine voice of M.S.Subbulakshmi and the refreshing cup of tea that was served first thing in the morning ! 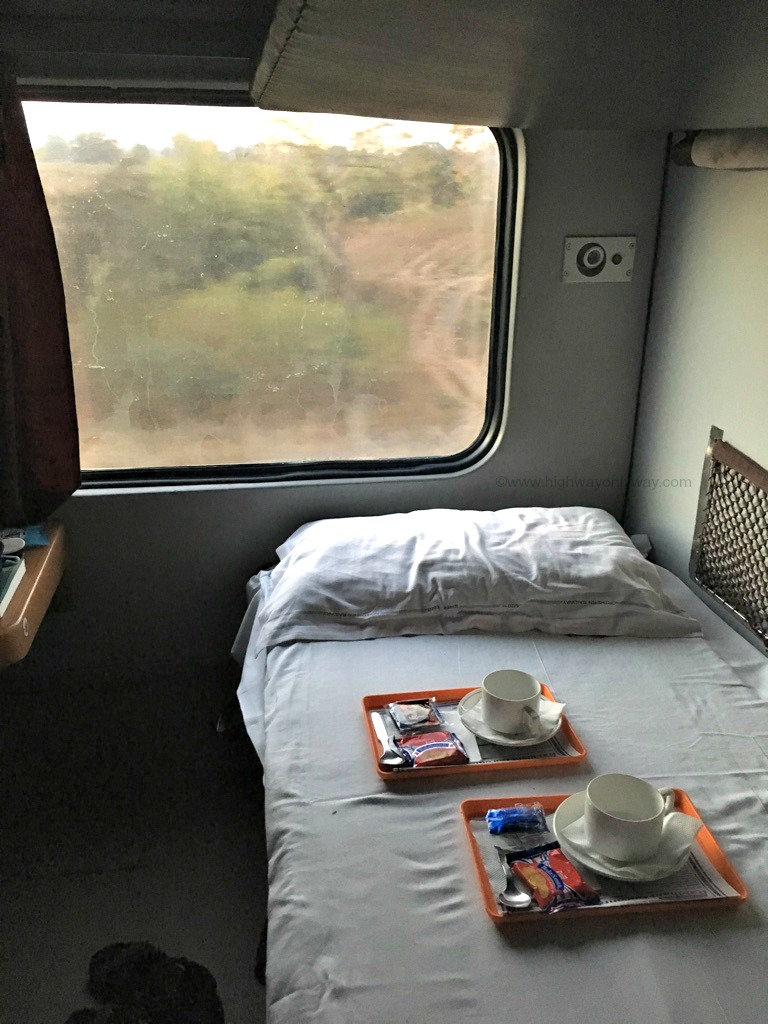 Watching the landscape and stations passing by from the comfort of your own coupe is an experience for a lifetime !

Cornflakes were served around 7 AM and an interesting breakfast followed.

By the time we completed the breakfast ceremony, we were inching towards Balharshah Junction, we could feel a pang, it meant, we were closer home and closer to our vacation ending.

We stretched ourselves on the berth, enjoying the visuals racing past the window, the sheer joy of lazing in bed and watching the world pass by !

The train slowed at one of the station and we let out a shout in excitement on seeing the station name. 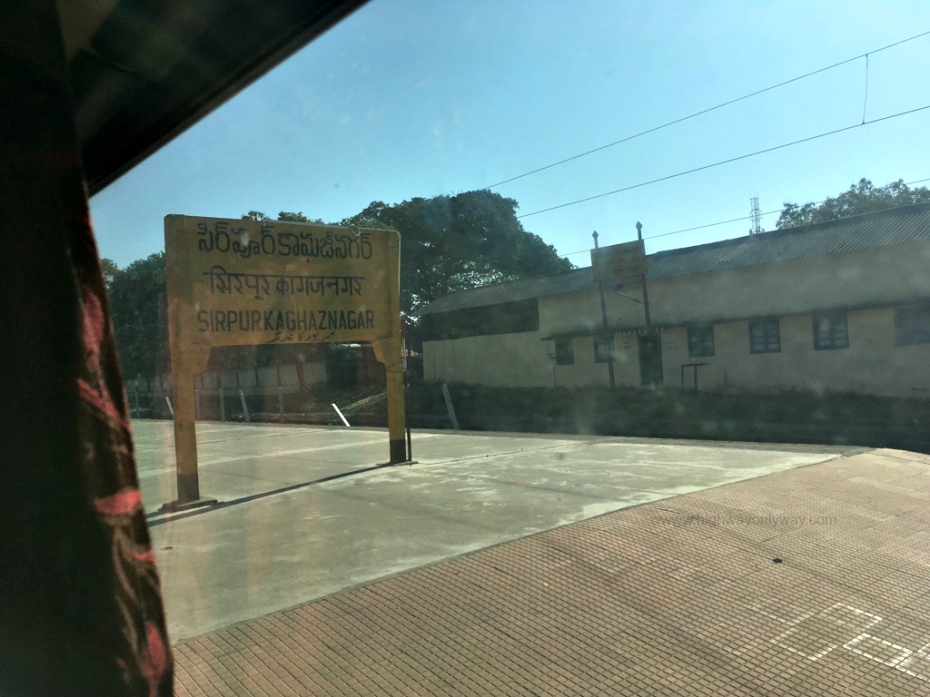 Telugu letters after 4 days ! Sripur Kaghaz Nagar, Telangana, we were back in home state. The first thing some one said was “no more Airtel roaming” ! 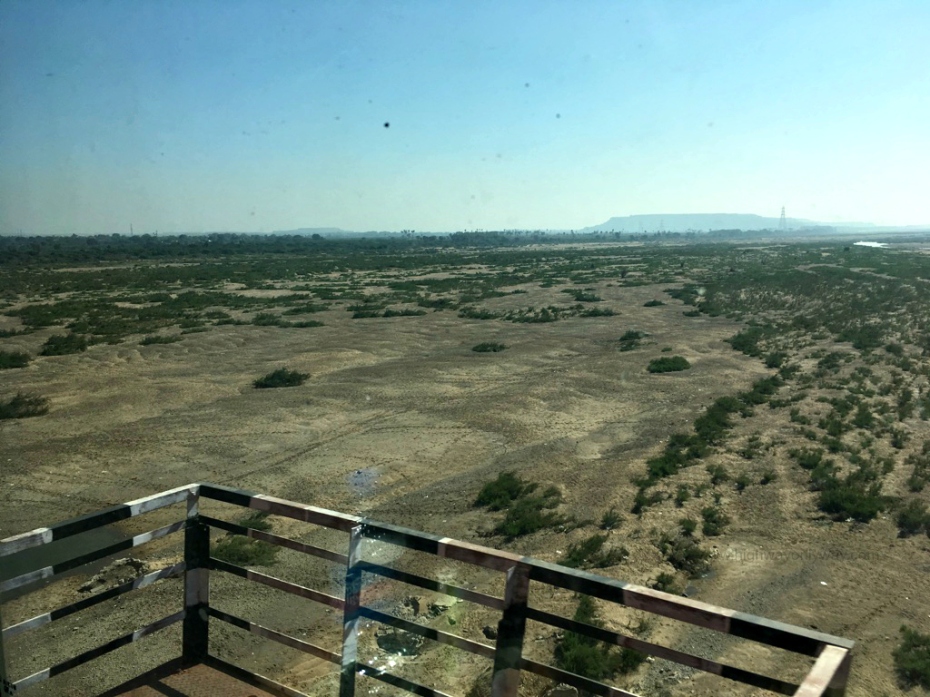 Our friend from Rajamundry refused to believe it was the Godavari ! In fact, it was hard to imagine Godavari without water, we are always used to seeing the river full to the brim at Rajamundry, irrespective of the season.

Every station that passed by gave us a knot in the stomach, our trip was ending, so much for not sulking about a vacation drawing to a close ! As if to cheer us up, our attendant was back with tomato soup at 11 AM, the first part of our lunch. 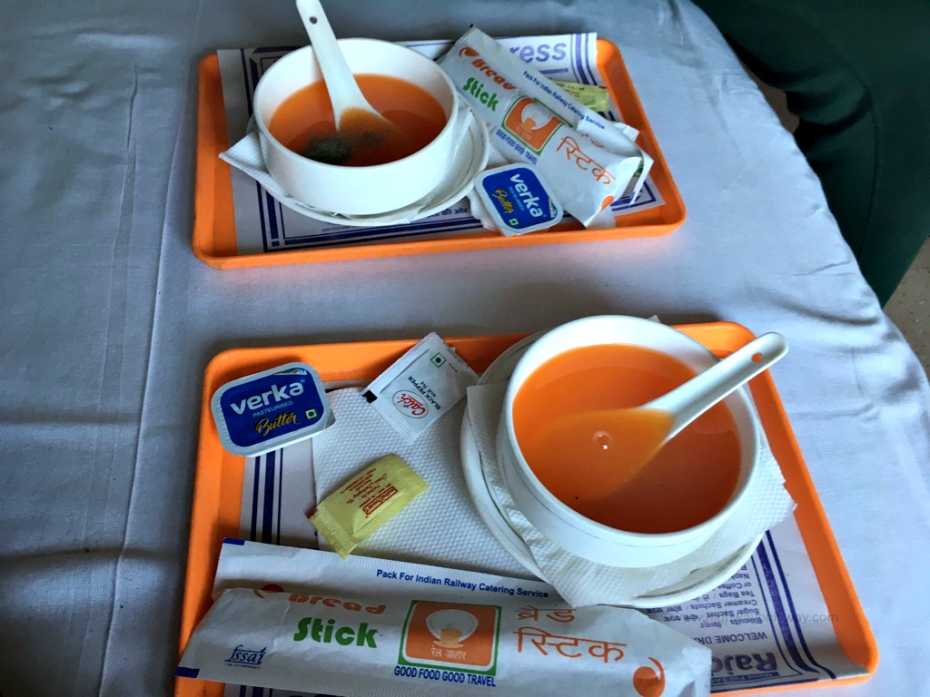 While we savoured our tomato soup, the train was speeding past cotton fields that were in full bloom, it almost looked like the area was covered in snow ! 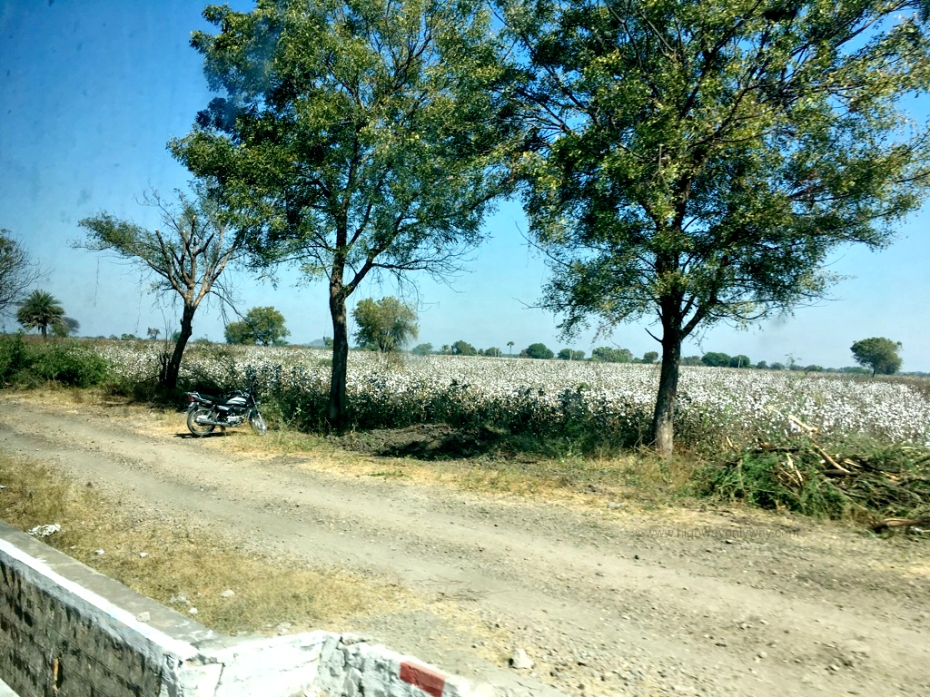 One can never get bored of looking outside a train window, everything seems to be zooming away but you still look forward to whats going to come next, it slows down suddenly, picks up speed, jerks, cruises, a train journey is so similar to life itself.

Before we could get anymore philosophical, our lunch arrived ! 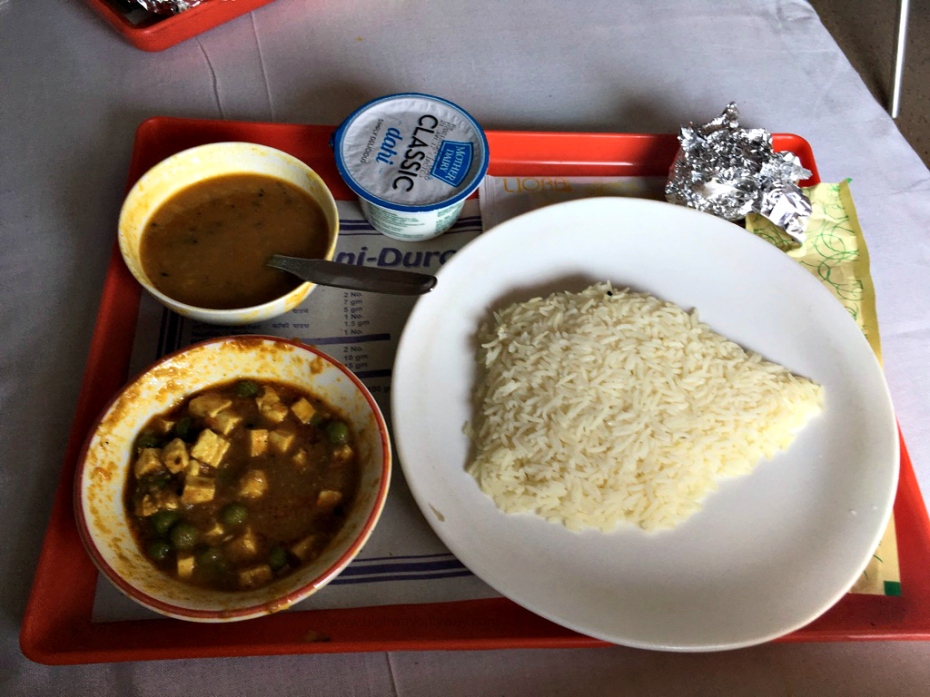 Roti, rice, dal and paneer curry, the rotis are missing in the picture because we finished them off before realising had to click a picture !

We still had about 2 hours of the journey left and the attendant took leave of us, “hamari seva yehi par khatam hota hai” (our service ends here) he said with a smile. We thanked him but missed being served something or the other to much every hour and a half !

It was interesting to see the train enter Kazipet junction from the North, the trains to Vijaywada and beyond usually deviate from Kazipet towards the South East. This was the first time we were entering Kazipet from another direction, we could spot the railway line that deviated towards Vijayawada. Railways are amazing, no wonder there are fan clubs for railways !

When we booked the tickets for Rajdhani, we were quite sure, going by Indian Railways schedules, that a train from Delhi to Secunderabad would atleast be late by an hour and that would give us an extra hour of First AC experience. But our hopes were dashed when Bhongir Fort made an appearance just one hour before our scheduled arrival time. 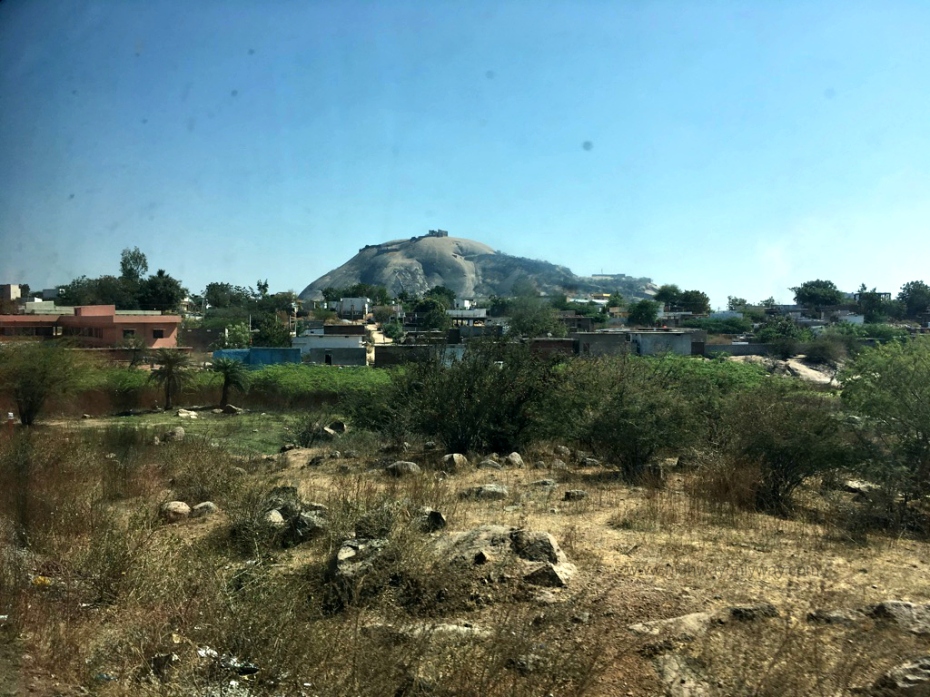 The train was running on dot, perfect timing. We tried to snooze a bit, to catch the last bit of a relaxing holiday. Exactly at 2 PM, the train reached Secunderabad, we almost wanted to bow down in respect for the train and Indian Railways. It is no mean joke to handle thousands of trains and lakhs of passengers every single day ! If you ever come across someone gloating about their experience onboard Rajdhani First AC, you can be sure it’s one of us !

It was curtains on our 20 day vacation, we had a whole new work regime ahead of us. Work is only a exception, vacation and travel should be the norm.