A fresh start to the travel calendar

We are 3 months into 2017 but we need to tell you about a short trip that we made on New Year Day, in keeping with our tradition of travelling on January 1st. After our Vizag trip in December 2016, which was over a weekend, we had really no scope of taking a day off until 2nd week of January because our travel partner was moving to a new job and in the corporate world, as we all know it, when you are under notice period, it is as good as being under Section 144, no leaves, no vacations !

A point to ponder this New Year

So, when New Year dawned, thankfully, on a Sunday, we decided we had to step out and breathe some air. With only a day to spare, we could not even figure where to go. Having heard of Dhaba Dhabi waterfalls and Gavi Siddeshwara cave temple, 130 odd kms from Hyderabad, we thought that would be a decent idea for a drive. More than visiting anything as such, we just wanted to hit the road and since it was only going to be a short trip, our camera didn’t accompany us.

After an insipid breakfast in a eatery on the outskirts of Hyderabad, we drove on the Chevalla road towards Dhaba Dhabi waterfalls. Getting out of the city, is enough to declutter your mind and roadside scenes like this one, will bring back some life into it !

It’s all ok for us to admire such beautiful scenes but one should always remember that these fields belong to someone else and it doesn’t give any of us a right to step into the fields and pose for pictures. A lot of families had stopped their vehicles, entered the fields and were happily clicking pictures while the poor farmers were pleading, shouting at them not to step onto the plants. Their pleas seemed to be falling on deaf ears.

Fields are always a wonderful sight but the land belongs to someone else and walking into their area is trespassing. People need to learn not to take things for granted. We clicked this picture from the road without entering the field but looking at the farmers shouting, it made us feel a little guilty. Were they upset that people were walking in their fields or didn’t they like people clicking pictures? This New Year, let us learn some empathy towards fellow humans.

Dhaba Dhabi waterfalls are 160 kms from Hyderabad on the Pargi route. It is part of Gulbarga district in Karnataka. Crossing a state border is like a ceremony for us, we always stop and click a picture. Here is the Telangana-Karnataka border. 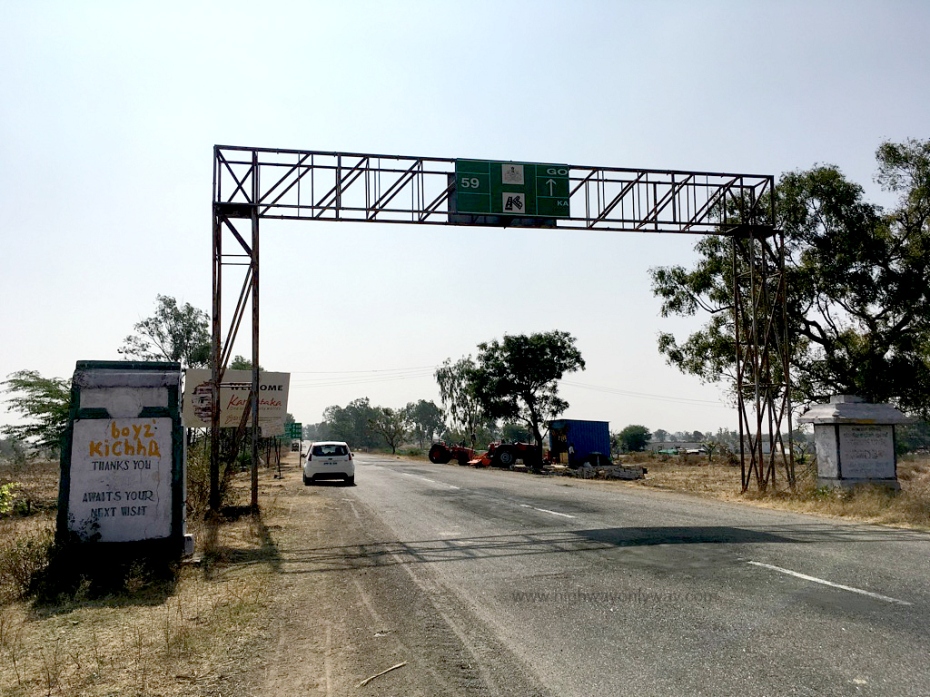 We have no idea who or what “boyz Kichha” is !

The landscape became drier as we drove further into Karnataka, after about an hour’s drive, the plains gave way to dry hills. The winter had turned the grass into hay !

Technically, it was winter but this part of Karnataka was already feeling like a furnace. We had no idea where we were heading, with Google Maps set to Dhaba Dhabi waterfalls, we faithfully followed it, we crossed the town of Gurmatkal. There was no sight of a waterfall or even a board but when Google Maps announced that we had arrived at our destination, as if by magic, a hill range appeared before us, with a stream flowing down from it !

Not expecting to find any water in this season but were overjoyed to find atleast a stream flowing in the name of a waterfall ! The three tiered Dhaba Dhabi waterfalls would be a feast for the eyes in the rainy season.

The road passes through a hill opposite the falls and standing on the hill, you can get a wonderful view of the entire hill range, the waterfalls and the valley through which the stream flows.

This photographer regrets not carrying a proper camera due to sheer laziness, this is the only decent view we can give you for now.

You just sit on the opposite hill and gaze at the waterfall, one has to see the place in person, no camera can ever capture the depth of the valley and the vastness of the hill range !

We spotted a few people below the hill waking towards the base of the waterfall, we couldn’t find a trek path or any other way to walk down the steep, rugged hill, the people must have come from nearby villages at the foothills.

After savouring the breeze and silence, we drove further up and parked the car at a place that seemed to have a path way closer to the waterfalls. Walking through a narrow path, we arrived at this spot. 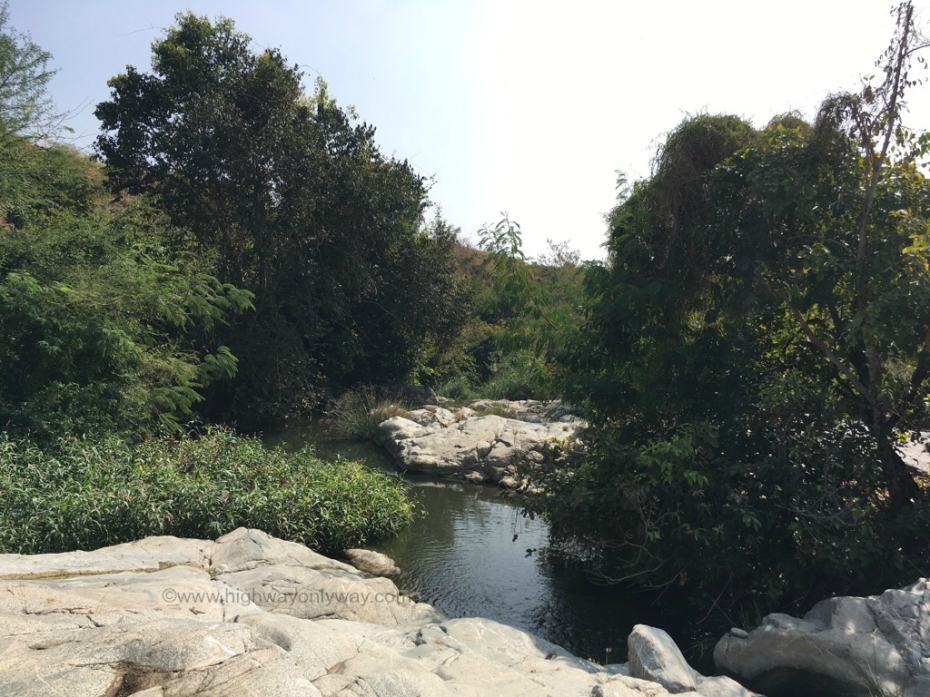 We caught the stream on its way down the hill !

A few metres away, there was a miniature waterfall, as if the stream was practising the waterfall effect before taking the plunge downhill, a kilometre away.

We traced the path of the stream for a few more feet and then the path got lost amidst the thick overgrowth and forest. 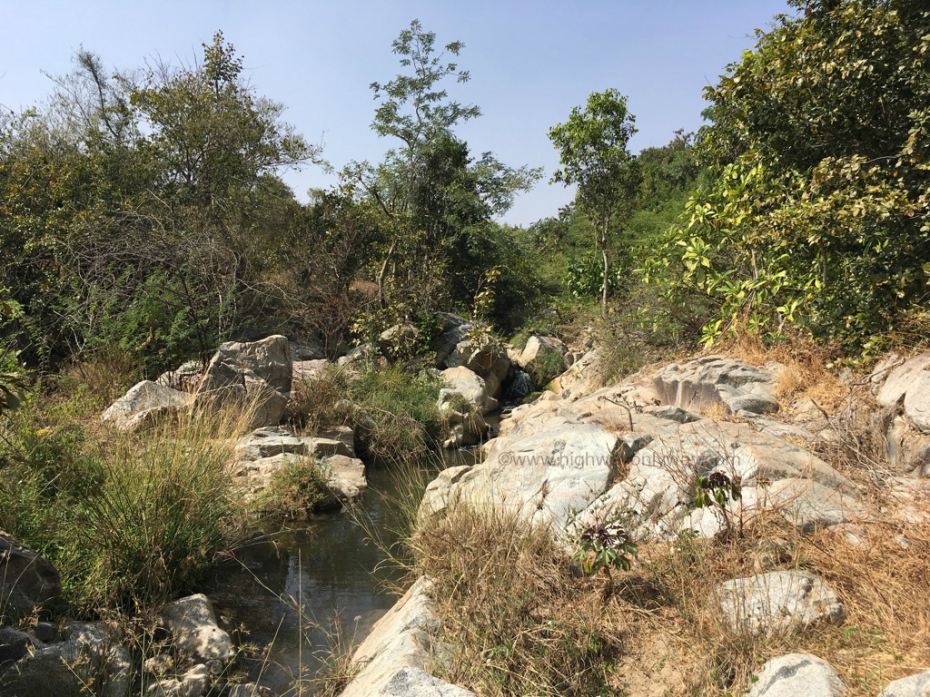 Where do these streams originate? Some are rain water streams, some flow from water oozing out of rocks, some from a rivulet, such a wonderful planet this is and nothing gives us the right take it for granted.

As lunch time closed in, we made our way back to the road, it was time to wind up our short trip. As we stood on the deserted road, to click one more photograph, we could hear ourselves breathing loud and clear, except for our breathing, there was absolute silence !

You don’t always have to travel far or to some exotic place, some unforgettable experiences can be found in the least expected places, you only need to get out and get on the road !

We headed back from Dhaba Dhabi towards Gurmatkal and then realised, we had forgotten to visit the Gavi Siddeswara Cave temple ! Not in the mood to drive back in the heat, we left it for some other time and stopped for lunch at some roadside Dhaba near Gurmatkal and treated ourselves to some spicy food that was as roadside as it could get !

We were back home by evening, the calendar year had just started and we opened our travel account right away !