Bidar Fort – Capital B of the Bahmani Sultans !

Authors of a new chapter in history

If we strain our memories of those boring history classes, we faintly remember hearing about the Bahmani Dynasty. When the Bahmani dynasty was established in the early 14th Century A.D, they were contemporaries of the already declining Kakatiyas and at their peak were sworn enemies of the Vijayanagar Empire. When the Vijayanagar Empire fell to the Deccan Sultans, who were offshoots of the Bahmani Sultans, it was the last of the Hindu kingdoms that had, up until then, ruled South India. Technically, the Bahmani Sultans marked the beginning of Islamic rule in South India.

At the centre of all this action was Bidar, the capital of the Bahmani Sultanate and our destination for our Sunday trip.

The idea to visit Bidar came to us after reading about the Jharni Narasimha Swamy temple, a cave temple near Bidar, we had read that one has to wade through waist deep water in a cave to reach the shrine and we were excited about the adventure.

We started from Hyderabad at day break, good roads took us to Bidar in just about 3 hours with a breakfast break in between. Enroute, when we crossed the Andhra-Karnataka border, we were amused to find “Andhra Pradesh” struck off and Telangana painted on border post. 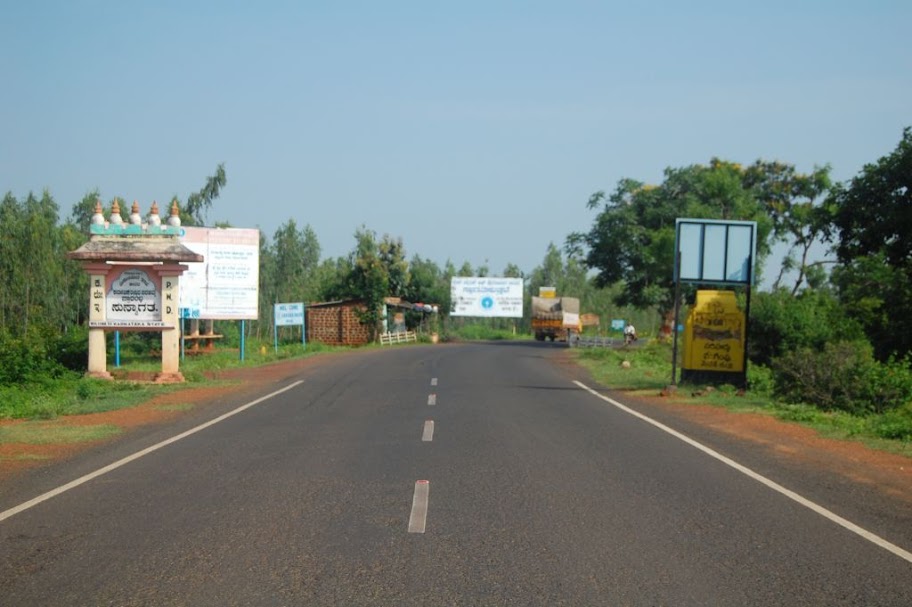 What was also amusing was how the hoardings suddenly switch to a different language, just a few feet away ! One of those little things that we love about our country !

Our first stop was the Jharni Narasimha Swamy Temple. It was still a little early in the morning when we reached the temple and it was not very crowded. We walked to the cave entrance and found groups of people walking in the water towards the shrine. The cave was dimly lit and smelt of bats. We hesitated a bit but decided to go in but right at that moment, we found some people spitting in the water and after that, there was no way we were going inside that water ! We are not usually sticklers for too much cleanliness while traveling because you cannot be too picky on the road but this was something beyond what we could take !

With due apologies to the Lord, we left from the place. We had bought spare clothes to change after visiting the temple, though only our feet got wet, we changed in one of the thatched changing rooms, just for the fun of it !

Bidar Fort – Quite a surprise

Since the trip was a on the spur plan, we hadn’t done much homework on what to visit at Bidar. With the first place not going as per plan, the next option was to visit the Bidar Fort. As we drove towards the fort, we found a clock tower in the middle the road, standing tall like a guard. 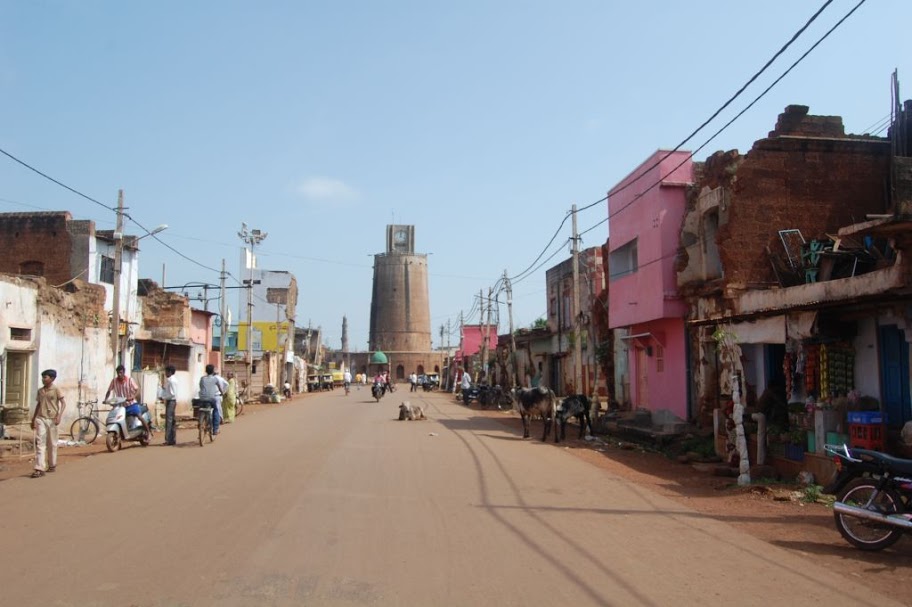 When we reached the gates of the fort, we were surprised that Bidar housed such a huge fort, obviously, we hadn’t studied our history lessons well ! Though the Bahmani kingdom had its beginnings with Gulbarga as its capital, it was later shifted to Bidar and it remained the capital till the end of the Bahmani Dynasty and saw the rise and peak of the Bahmani reign.

We regretted not carrying a proper camera, the only point and shoot that we had was already beyond its retirement age and it stopped working after we clicked a few pictures ! The only other option was using our Nokia N900 phone. 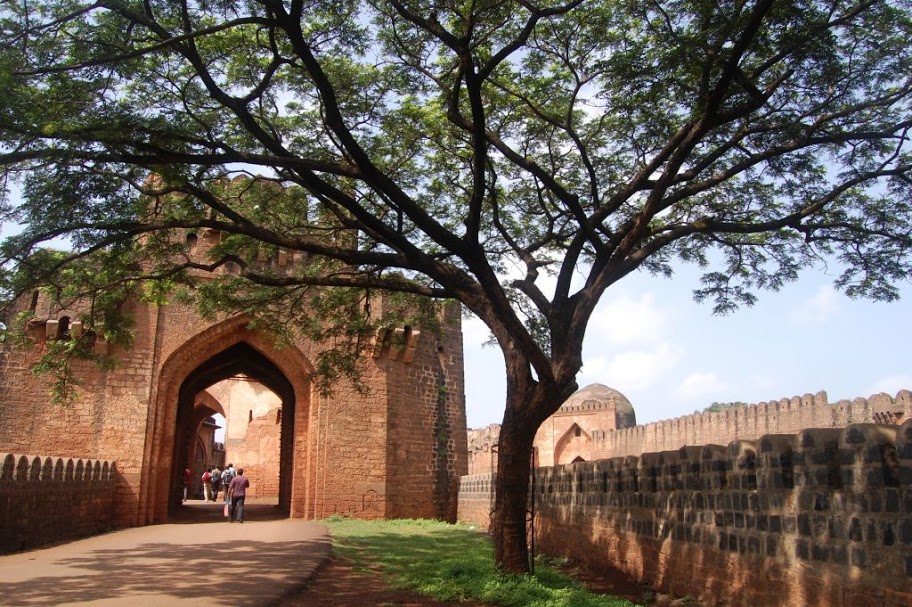 Beyond the entrance lies one of the seven gates of the fort called the Sherz Darwaza, we found it interesting for its painted tiles, we hadn’t seen such tiles in any other fort. Also interesting was the sculpture of two tigers, usually uncommon in Islamic structures. 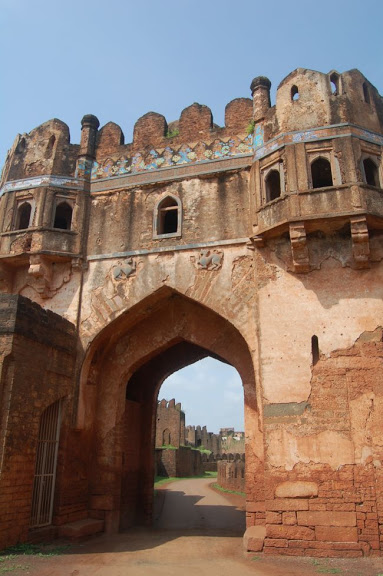 The Sherza Darwaza leads to the Gumbad Darwaza or the Domed Gate, this one looks regal. 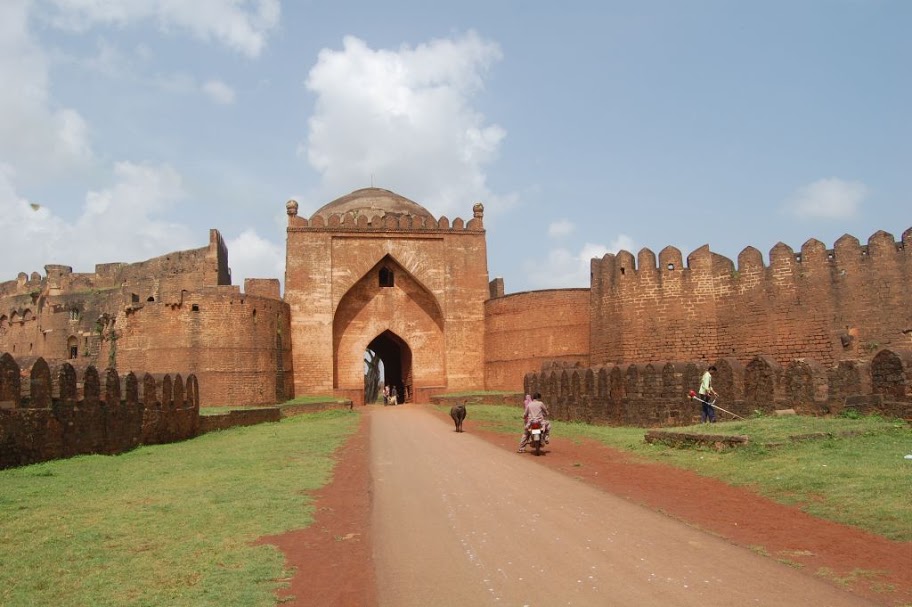 We hadn’t known that the Bidar Fort was one of the mighty forts of the Deccan until we actually visited it. Not much remains of the fort today but the ruins that remain speak volumes of its erstwhile glory. 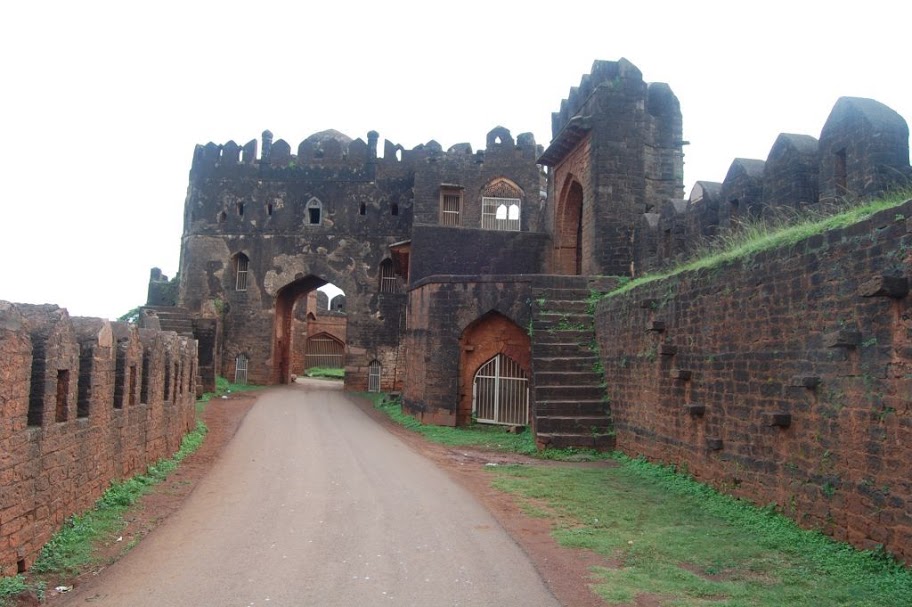 When you look down from these walls, you can see the formidable outer wall and the moat of the fort, gives you an idea of what might the capital city of the Bahmani kings held. 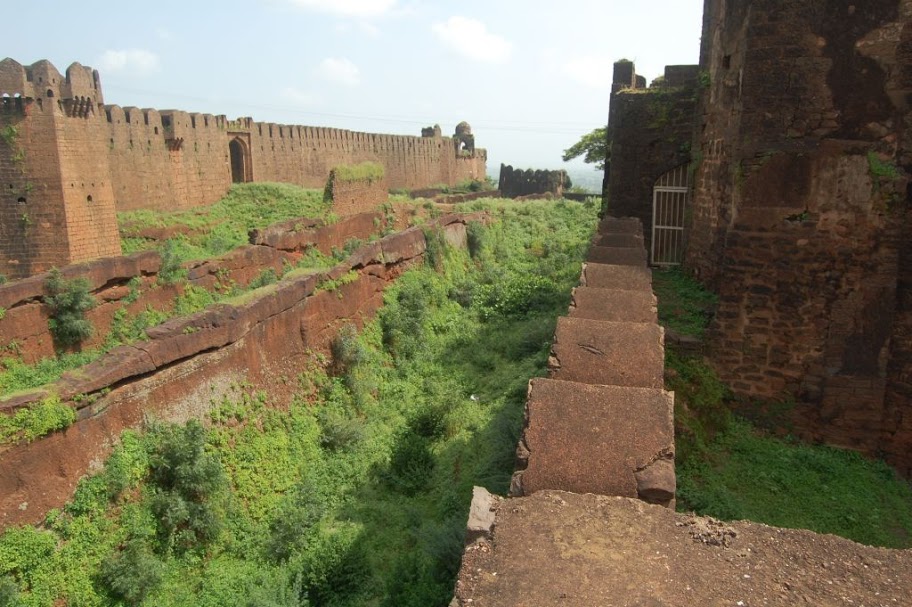 While we were walking around, out of the blue, we heard a roaring noise, for a moment, we thought the fort was coming alive but it turned out to be an Airforce drill ! 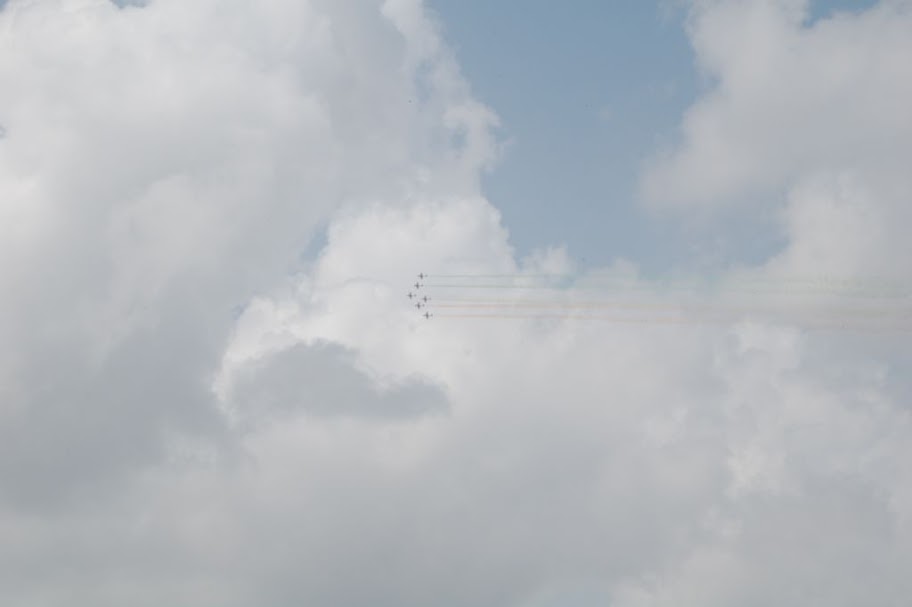 Somewhere near the Gumbad Darwaza there is a Rangin Mahal, it is supposed to have some beautiful painted tile work, we had no idea about the Rangin Mahal until we read about it after the trip, so we missed visiting it.

We walked around for a bit and found a few more ruins and structures. There is not much information about the buildings inside the fort, there is an information board at the entrance but it only talks about the history and briefly describes the fort.

It was a bright sunny day and we got some great views of the fort, heightened by the clear blue sky dotted with training aircrafts, green grass and the worn out brown colour of the fort, if only we had a better camera ! 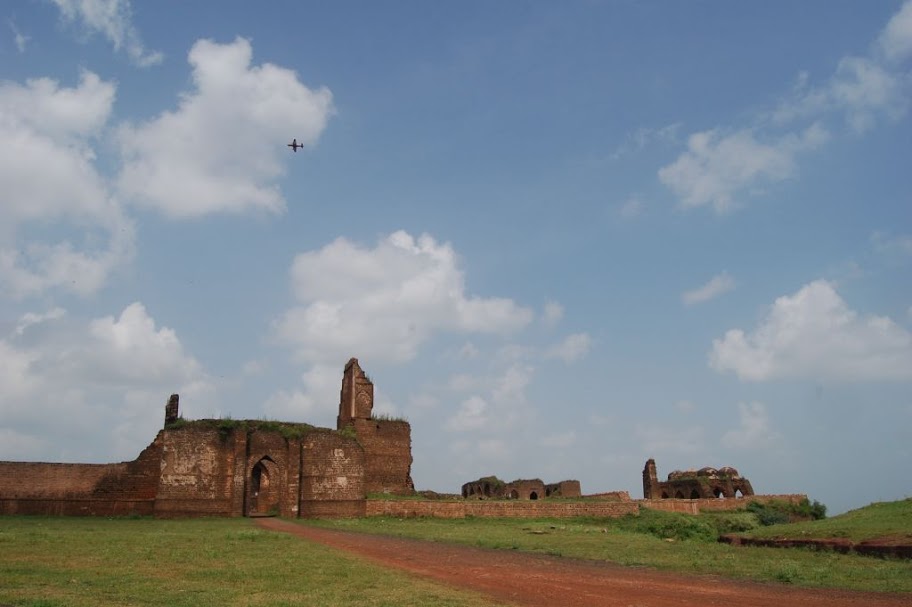 Further up, there was a small pond which we imagined must have been a private pool for the queens ! 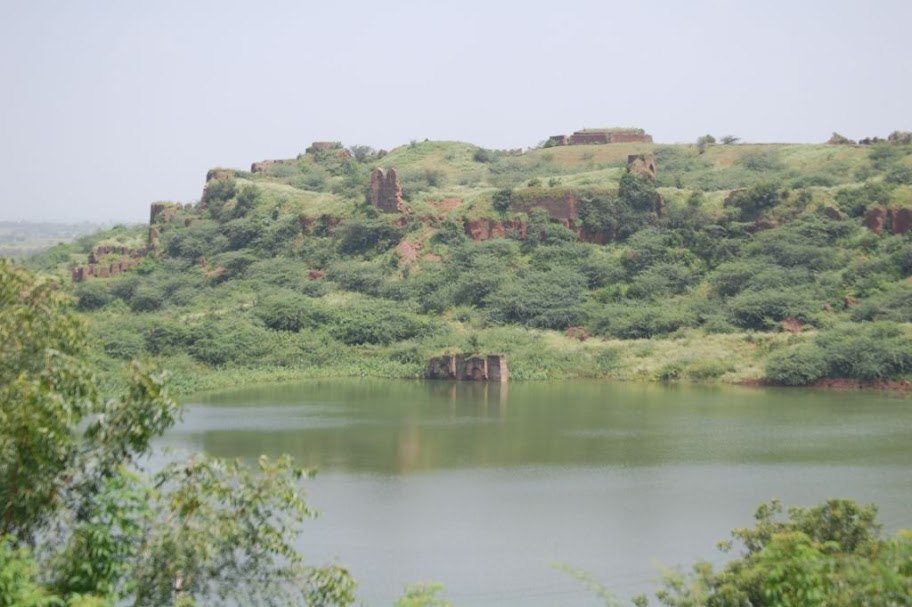 While walking back to the main fort area, we found this structure, it was probably a watch tower. 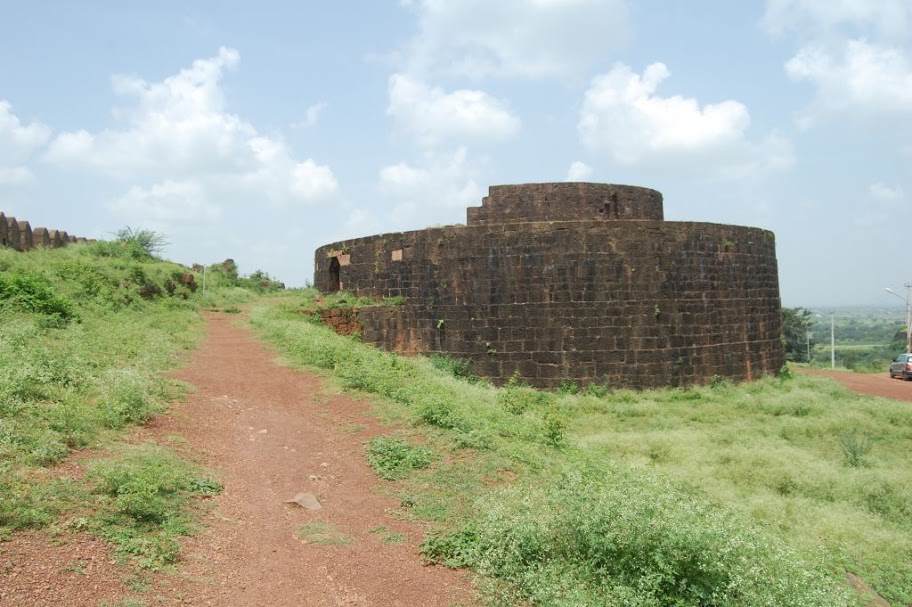 At the top of it was a canon, wonder how many wars and bloodshed this canon must have seen, today it lies quietly as a backdrop while ridiculous people like pose for pictures. No, we are not posting pictures of our ridiculousness ! With a mobile phone camera, we couldn’t even take a complete picture of the canon. 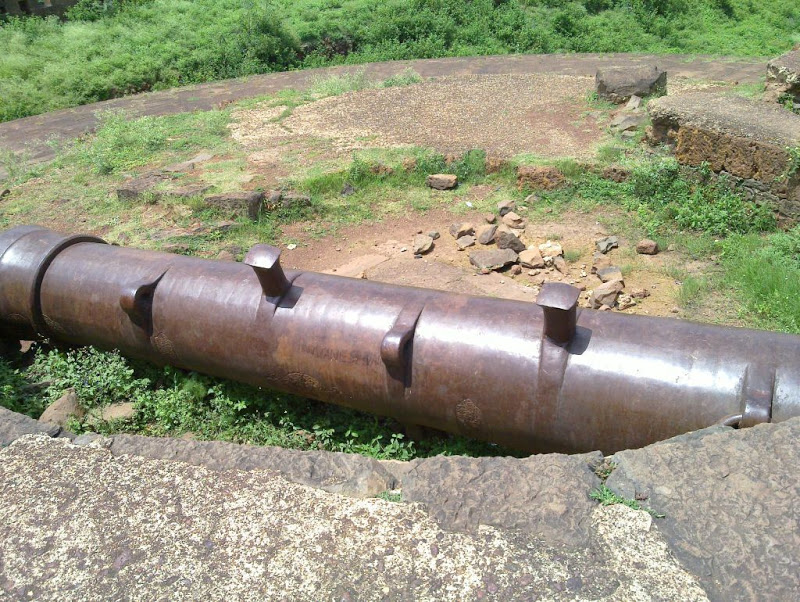 A feast for the eyes !

We then walked up to the main courtyard of the fort which houses the Solah Khamb Masjid and the Gagan Mahal, there is no information at the Fort or we probably missed it, we came to know the names of the structures after reading about them on the internet.

The Solah Khamb Masjid was closed for public when we visited it, we loved this view of the mosque contrasting with the bright colours of the well maintained lawns. 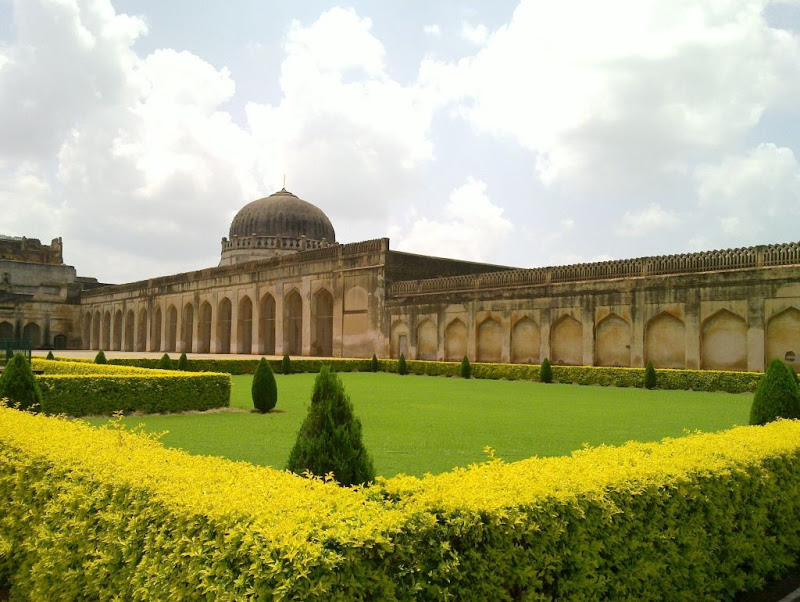 The Gagan Mahal too presented a very pretty picture, it reminded us of the harem buildings of the Golconda fort in Hyderabad and why not? The Qutub Shahi kings were actually a branch of the Bahmani Dynasty. 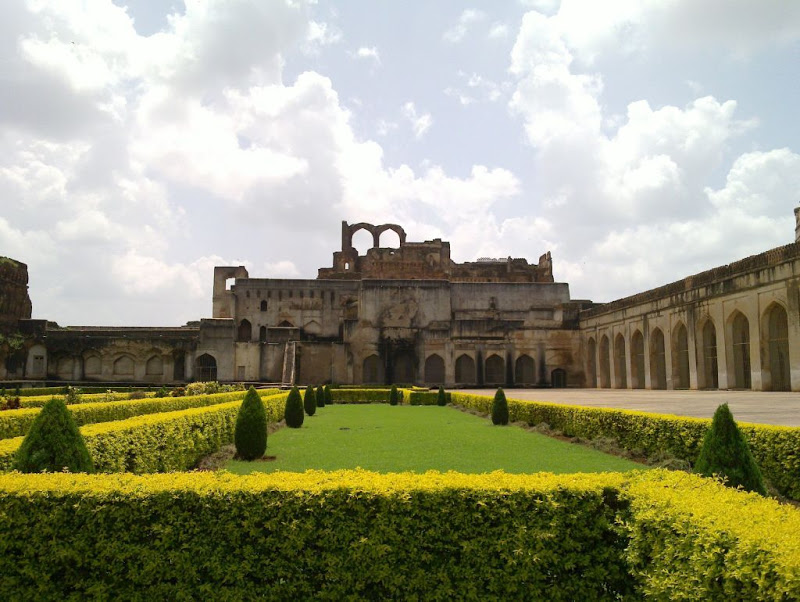 It was quite and peaceful here and we just couldn’t take our eyes off the visuals, did the ruined buildings add beauty to the gardens or did the gardens enhance the charm of the buildings? 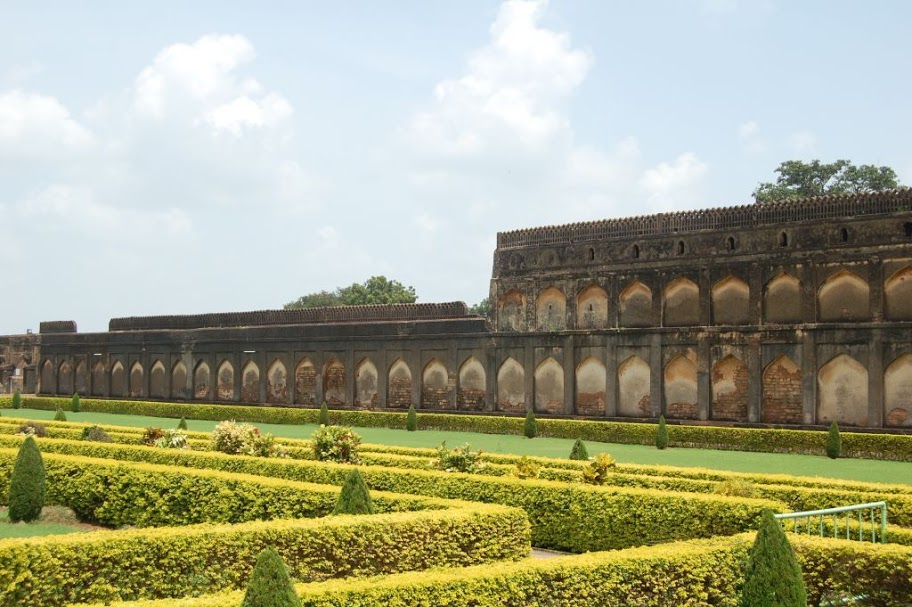 There is a small museum of sorts in this complex. We were surprised to find some sculpture that did not seem to fit in the fort. 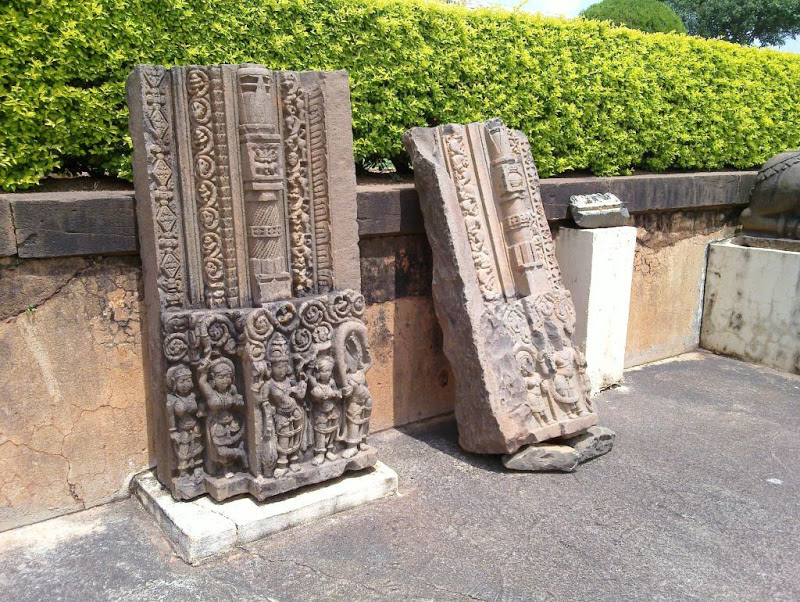 This Nandi was a huge give away, though, these sculptures, in all probability, belonged to the Kakatiya period. 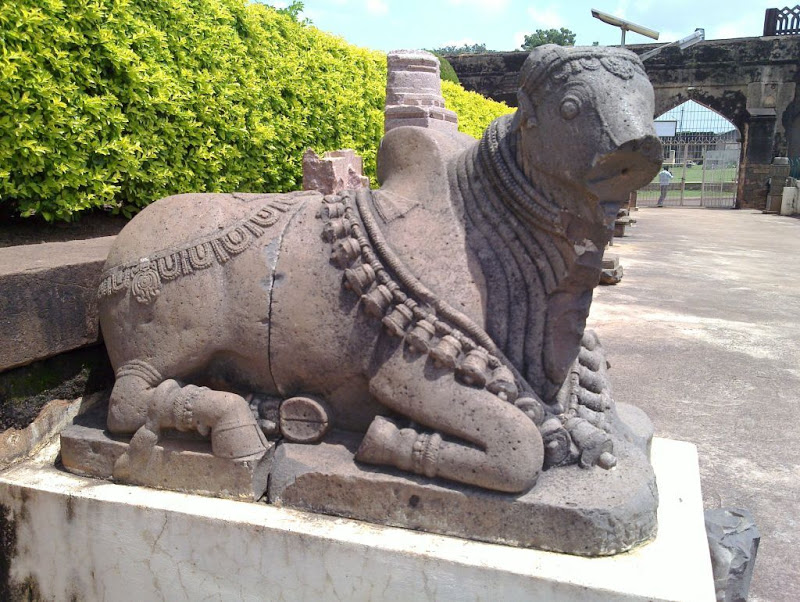 So the origins of the fort most likely date back to the Kakatiyas. Always interesting, these links in history !

A centre of learning

As we were leaving the fort area, we spotted this huge building on the roadside. 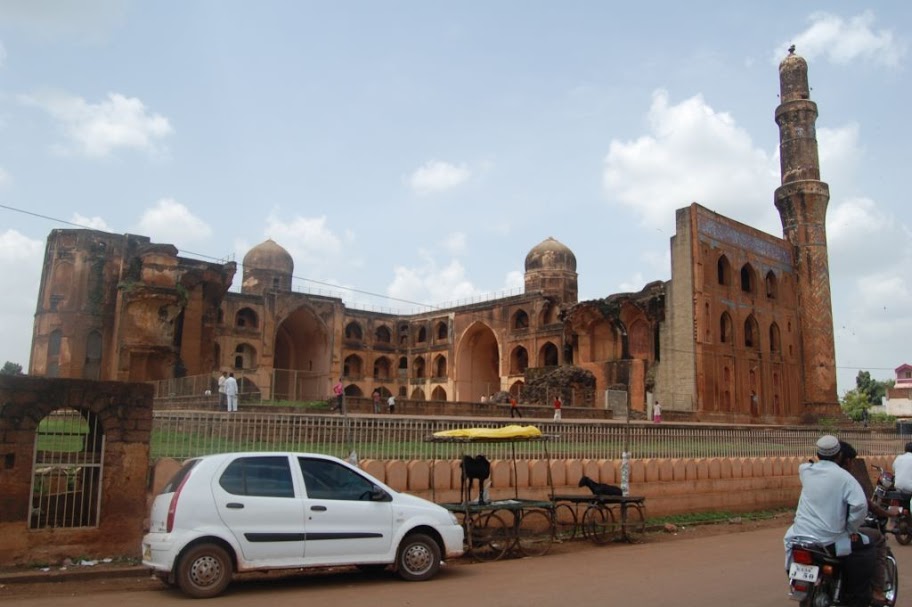 This is the Madrasa of Khwaja Mahmud Gawan, a Persian scholar. Built in the 1420s A.D, the Madrasa served as a residential University, with quarters, libraries, classrooms and so on. 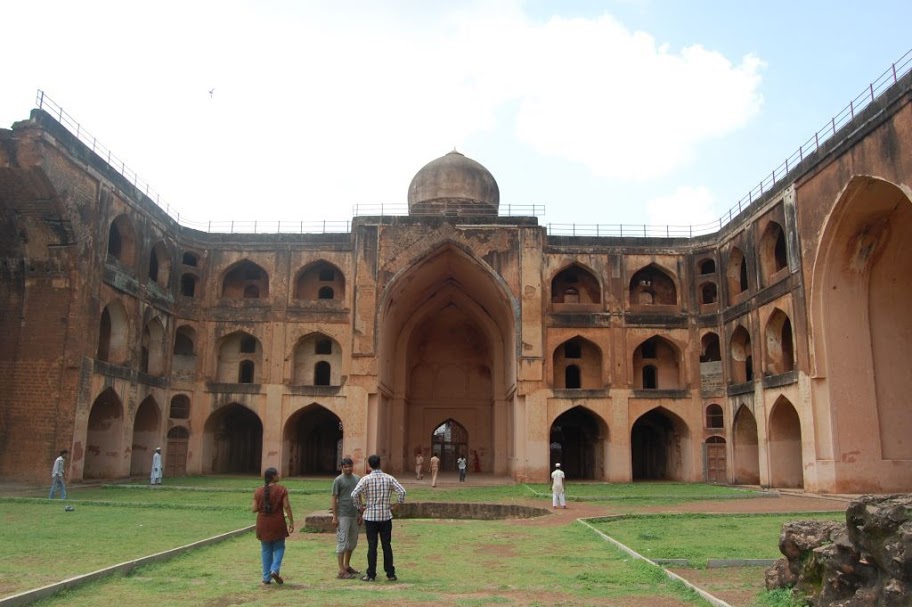 The information board says parts of the building were damaged due to gun powder explosion. It seems it is the one of its kind in India !

Back on the road, we tried looking for the famous Bidri metalware to take back as a souvenir but there were hardly any shops in the area. As lunch time approached we decided it was time to wind up our Bidar trip.

We stopped for lunch at Bharat Petroleum’s Ghar Dhaba at Zaheerabad and headed back home.

Bidar is an interesting place to visit, we planned for something and ended up visiting something else, which turned out to be a very pleasant surprise.

– You could visit Bidar as a day trip from Hyderabad, the place is easily accessible by bus. Bidar has a railway station too and a couple of trains from Hyderabad on the Pune, Aurangabad line pass through Bidar.

– The Bidar fort is open from 9 AM to 5 PM. There are some more monuments like the Bahmani kings’  tombs and mosques to visit, we missed these. Read up a bit on the places of interest or check locally.

– The Bidri metalware or Bidriware is very famous and originates from Bidar. Though you would find it in cities like Hyderabad, it is always nice to buy art in the place of its origin. Check out for the shops in the town, we couldn’t find any interesting ones near the fort.