The fact that it took 8 blog posts spread across a month to write about the Badami-Pattadakal-Aihole circuit, should give you an idea about how much there is to see in these places and plan accordingly. Every single temple, cave, monument in these places is a must visit. Of all the places, Aihole will make you go insane with the sheer number of temples and temples and temples. You will be forced to give up visiting so many of them or spend only a short time at a temple, if you do not dedicate one full day for Aihole.

Let us go back to our trip, shall we? After visiting the Meguti Temple and nearby temples, we moved further two temples that seemed to be located at the edge of the village, i.e. if you looked down from the Meguti Temple hill, these two temples were the last on the North side of the village. To the West end, we saw several other temples, we were running short of time by then and decided to complete only the North wing and then head to the main temple complex of Aihole.

In addition to time, we were running short of camera battery charge, we still hadn’t covered the popular temples of Aihole and our camera threatened to shut down any moment, what a tragedy ! In such a tense atmosphere, we went to the Huchchimalli temple.

Huchchimalli means “Mad Malli”, if you are wondering what kind of a name that is, you need to remember that the entire village of Aihole is on encroached land and this encroachment goes back by several centuries. In fact, some of the temples were used by people as houses and they have been named after their inhabitants ! So was Huchchimalli temple named after the a mad man named Malli?

The temple, of course, is the work of a great mind, mad men could have built temples like these. 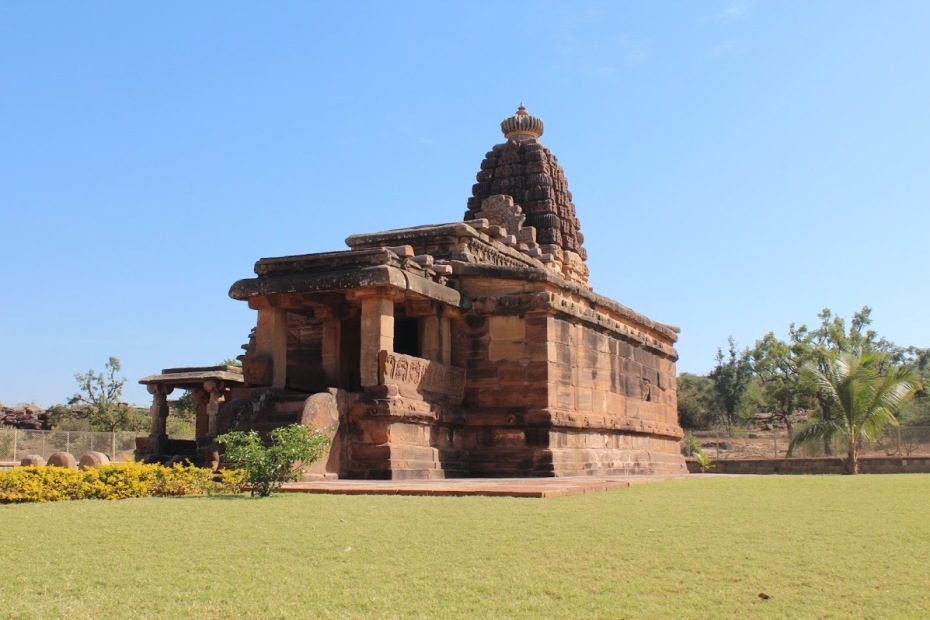 The internet tell us, this 7th Century A.D Nagara style temple was probably where the sukhanasa or projections on the shikhara built for the first time. Evidences of research and experimentation in temple architecture, you could almost imagine the Chalukyan architects brain storming for their next architectural idea !

The temple does not have exquisite sculpture but there is a beautiful carving on the ceiling of Lord Karthikeya on his peacock. 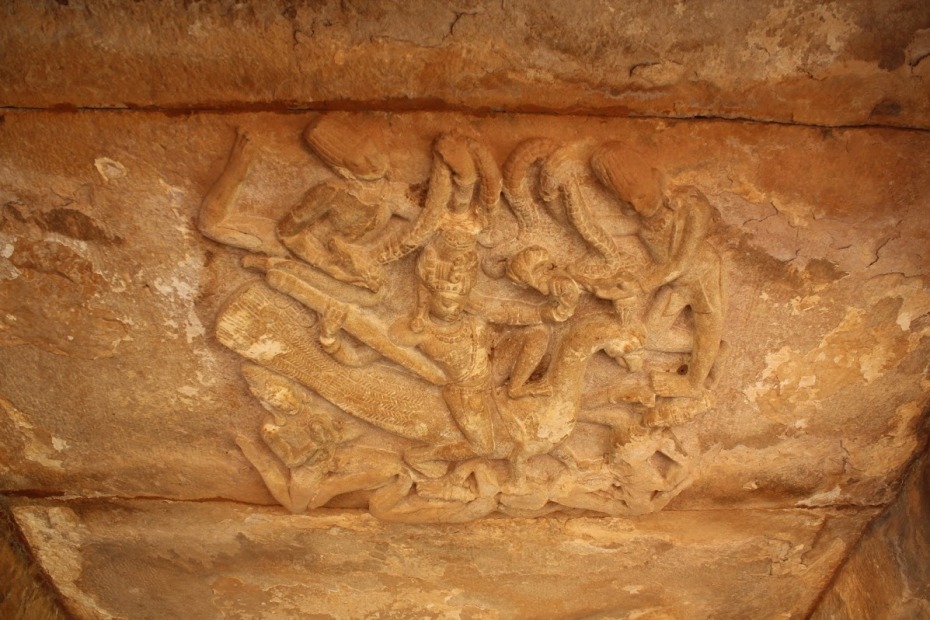 It is one of the well-preserved temples in Aihole, probably because of its proximity to the Durga temple. There is also another semi-ruined temple just next to the main temple.

A few yards from Huchchimalli temple is the Ravana Phadi Cave temple built in the 6th Century A.D, probably the oldest cave temple of the area. 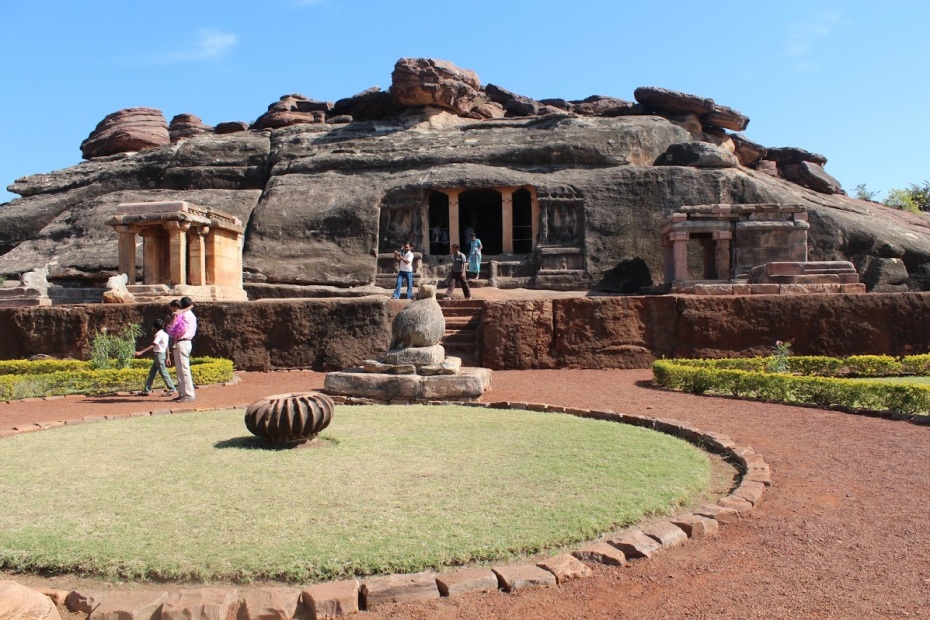 In front of the cave temple, there is a huge monolithic pillar, again, we do not know why the pillar stands there, was it the Dwajasthamba? 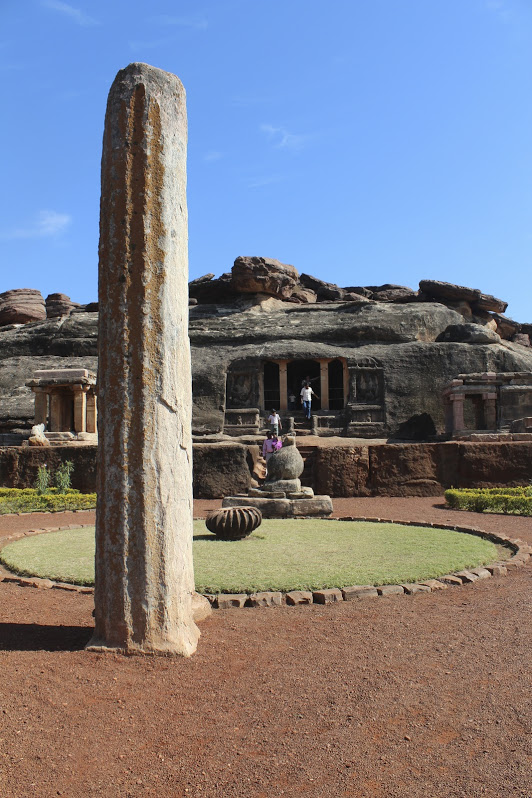 The cave temple is dedicated to Lord Shiva and has some amazing sculpture on its walls, just like the cave temples at Badami. This one has sculpture of Nataraja, the ceilings are grandly decorated. 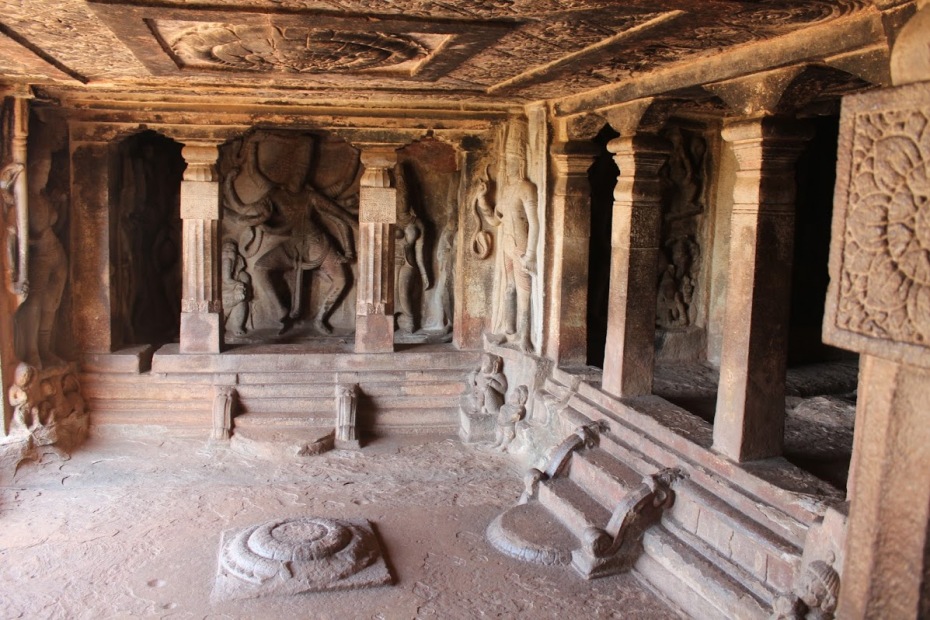 It is difficult to find angles inside this cave that will cover the whole area without cutting off anything. The above picture was taken with the photographer lying on the back, still a part of the ceiling is cut off. We had very limited battery reserve by then and had to be very careful with the number of pictures we were taking.

Here is another picture of the sculpture on the ceiling taken from Nataraja wall side, it is scary to lean back to take a picture with the imposing Nataraja figure looming behind your back ! Despite every effort, the whole ceiling couldn’t be fit in. But, just look at the carvings ! 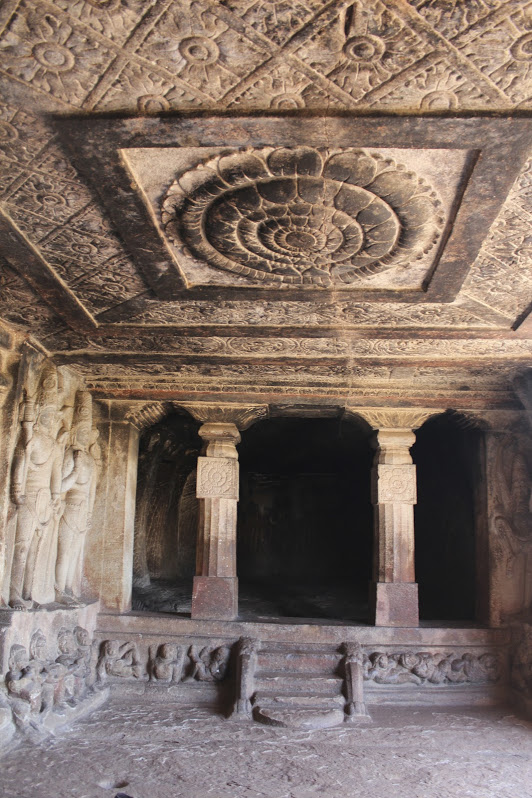 This is one sculpture you will find in almost every temple in Badami, Pattadakal and Aihole – Lord Varaha. 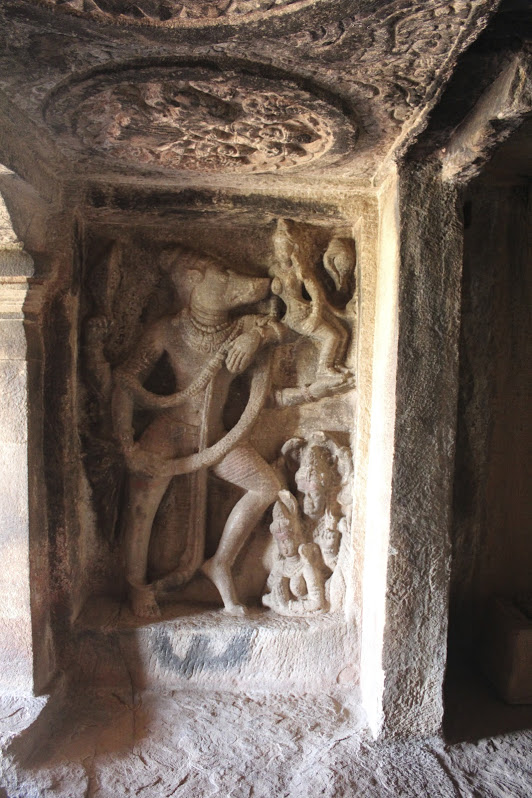 The Boar or Varaha avatar of Lord Vishnu was the royal emblem of the Chalukyas. Their emblem had a Boar, a conch, a disc and a mirror like image. Check the internet for pictures, we couldn’t get our hand on the emblem, thanks to our camera.

What is very interesting is that, the Vijayanagar kings, almost a 1000 years later, also had Varaha as their royal emblem ! History never ceases to fascinate us.

The Durga Temple that we have been talking about from the start of this post is where the acutal action happens in Aihole. This is the main location on Aihole’s tourist map. It feels like a world of difference as you move from all those temples in the village, looking worn out and badly abused by encroachments, to the Durga temple. Suddenly, you will find shops, eateries, vendors, tourist buses, vehicles and even the ASI mark – the ticket counter ! That is why we call it the “Aihole’s celebrity”, everybody’s attention is centered here.

There is an entrance fee of Rs.5/- for Indian citizens and Rs.100/- for foreign citizens (do you think foreigners would take that kindly?)

The Durga Gudi complex looks like a smaller version of Pattadakal. 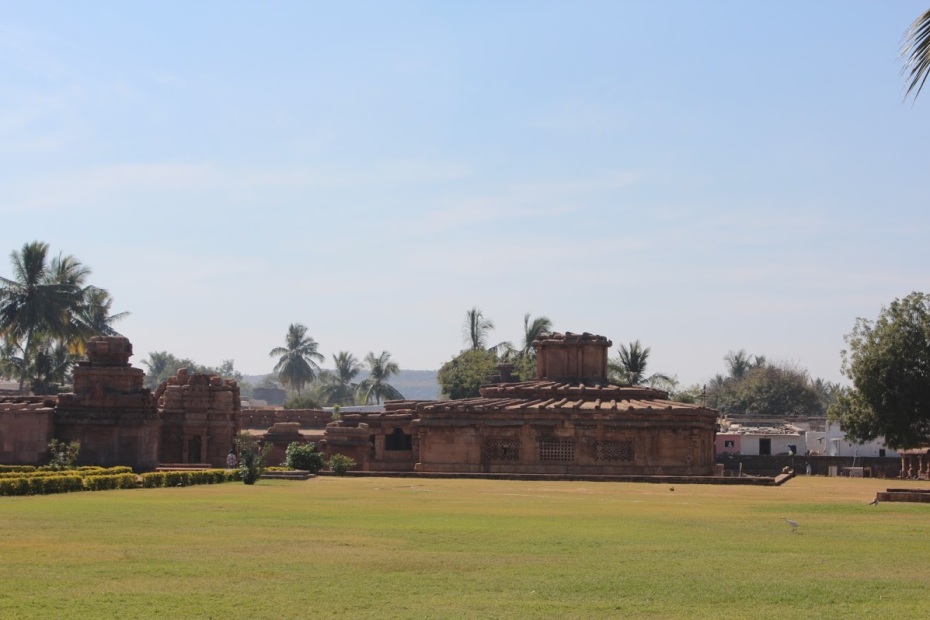 The Durga Gudi stands a little away from the rest and is the largest and the grandest of the group. 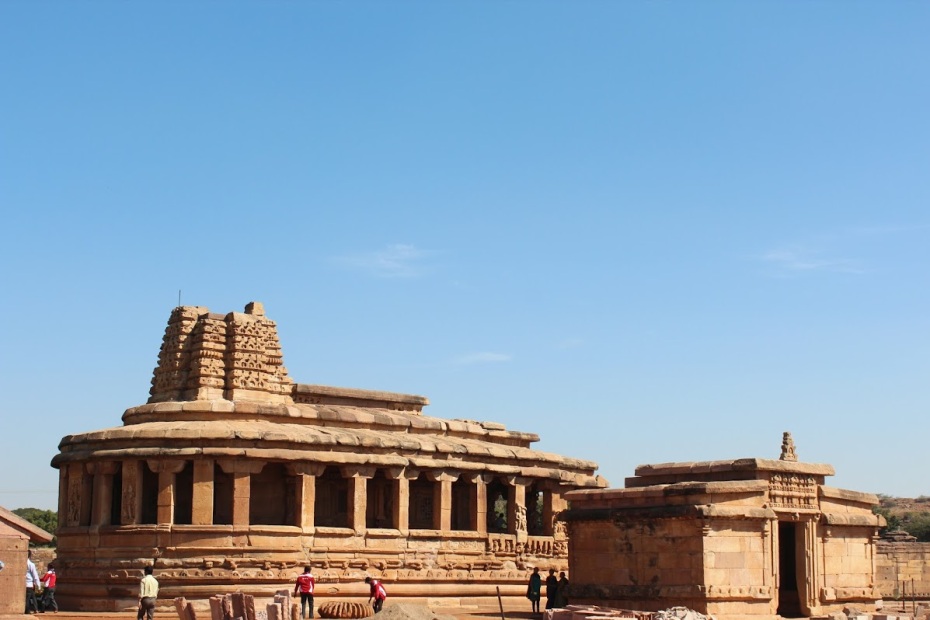 The story of the Durga Gudi, as per the ASI information board is that it was actually meant to be a Surya Temple, which later got converted to a Shiva Temple. If you are wondering where Durga comes in the picture, well, here Durga doesn’t mean Goddess Durga. It is actually Durg (Fort) temple, the temple gets its name probably from its proximity to a fortification !

Built in the 7th Century A.D, the architectural style of the temple is called “Gajaprastha”, it means the temple style is built to resemble an elephant’s back. This style too was probably developed by the Chalukyas. 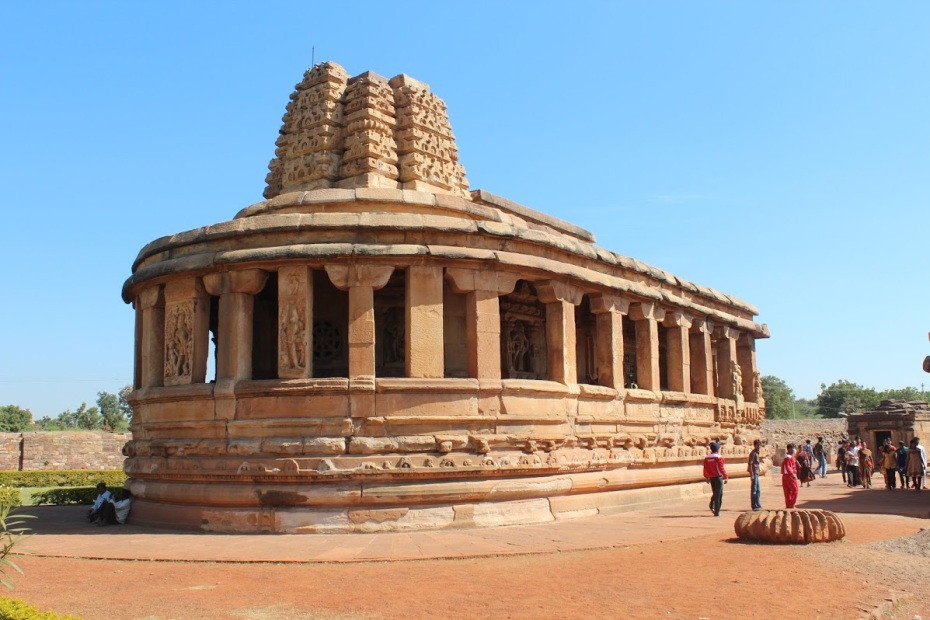 The dome or the Amalaka of the shikara lies on the ground.

As every Chalukyan temple, the Durga temple is rich with sculpture, our fast draining battery did not allow us to take too many pictures. The walls along the curvilinear pradakshina patha is adorned with intrinsic designs, sculpture of gods and goddesses. The sun light streaming in between the pillars added to the beauty. 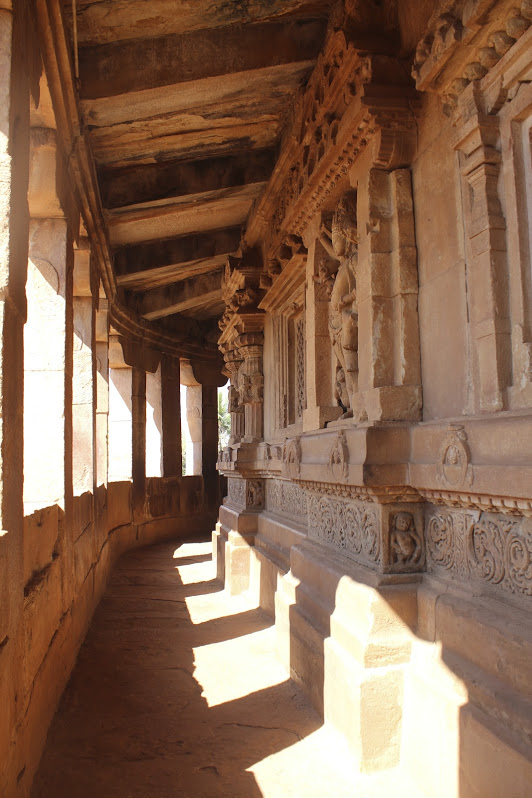 Our camera had almost given up by then and we literally pleaded with it to hold on for a little while, these temples were too good to go without pictures.

The next popular temple in Aihole is the Lad Khan temple. While some sources say this is probably the oldest structure dating back to the 5th Century A.D, ASI dates it to the 7th Century A.D, which should be the reliable date.

Does the name of the temple sound odd? The temple has been named after a Muslim officer who used this temple as his residence and the name stuck, hence. Aihole should be named the encroachment capital of the Chalukyas ! One feels extremely sorry for them.

The temple is also in the Gajaprastha style. 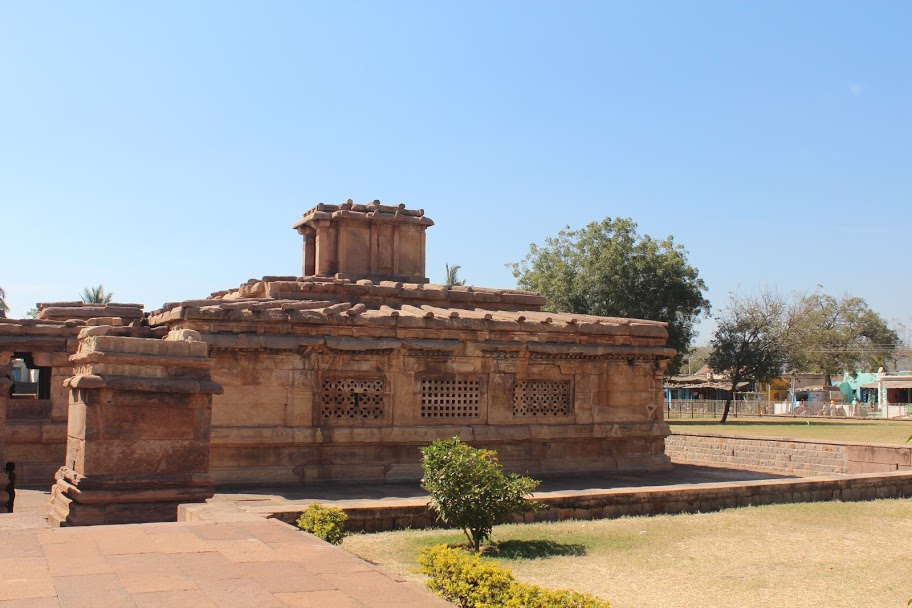 It also has an upper chamber that could be reached by a ladder, you are not allowed to go on top now. The roof has log like structures made of stone, they tried to replicate wooden logs using stones ! What an idea, sirji !

Close to the Lad Khan temple is this little Cottage temple. It looks like a cottage, similar to one we saw earlier at Kontigudi complex. 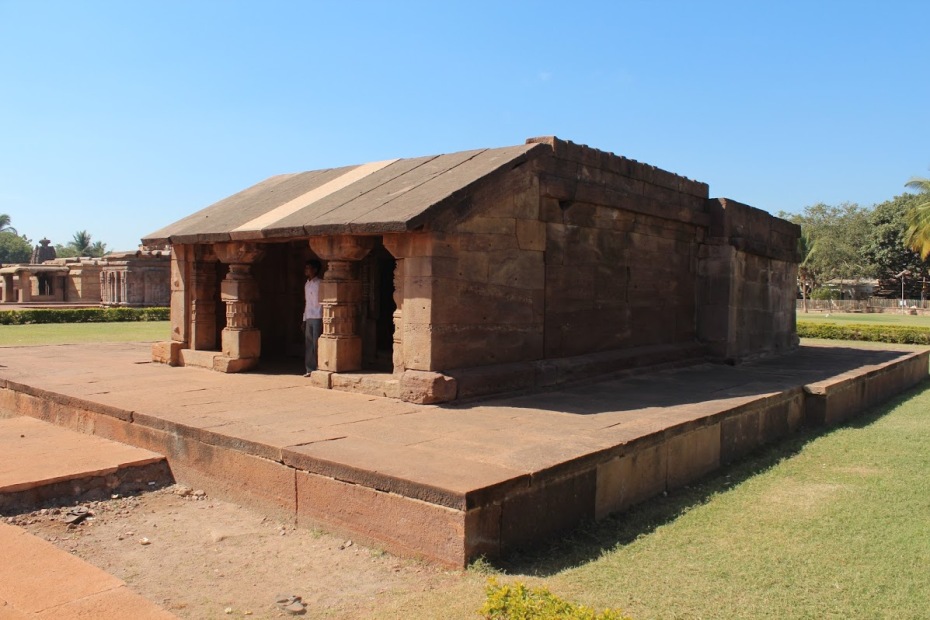 As we were trying to click pictures of the grand interiors of one of the temples, our camera finally revolted and gave up ! It took a lot of effort to control the disappointment. But what had happened had happened, we should have charged the batteries in the morning, we should have done proper research to know that Aihole that so many temples but none of it was going to revive our camera batteries. We tried clicking a few pictures using our mobile phone but did not get any satisfying results.

We were tired too by now and made a quick scan of other temples like the Gaudara Gudi, Suryanarayana Temple, all located inside the Durga temple complex. There is another group of temples opposite the Durga temple complex, we gave it a miss. It was almost like an anti-climax but the joy of having visited such ancient marvels could not be eclipsed by such petty disappointments.

ASI has an Archeological Museum next to the Durga temple. You will find some interesting artifacts and information in the museum, do visit it. They also have a model of the entire Aihole village with the location of the temples. When we checked the model, we realised we had visited most of them, barring a few group of temples here and there.

Lunch with the leaders !

Outside the temple complex, we gulped down glasses of sugarcane juice as the noon heat began to worsen. We started back to Hyderabad, this time via Raichur. Enroute, we stopped for lunch at a dhaba near Amingad. The dhaba was called “Bharat Dhaba”, the owner seemed to be a great patriot. The dhaba was full of pictures of political leaders of India, starting from Gandhi to the latest leaders. The ones who were no more had garlands on their photos. It was absolutely hilarious.

He was even watching a programme on TV that spoke about the greatness of Kannada language. We had to appreciate the man for this. We loved the food too.

The rest of the journey via Hungund, Mudgal (we were surprised to find a huge fort on the roadside as we drove past), Raichur, Mahbubnagar and then back to NH44 was uneventful.

Badami-Pattadakal-Aihole was a long time dream and now that it has been realised, it is now our most favourite memory ! Long live the Chalukyan Glory !