While on a tour, we usually wake up early in the morning to make the most of the day and also, the best time to get a feel of a place is to wake up before sunrise and watch it slowly getting brighter. If you have a cup of coffee in hand, then there is no better feeling. On our first morning at Inn Pondiville resort near Auroville, we woke up to a very pleasant morning, having reached a little late the previous night, we did not get a chance to look around this pretty resort. As usual, we wanted to enjoy the fresh morning with some coffee but the people at the resort were amused and told us at Inn Pondiville, life was too laid-back to start before 8 AM, the whole idea was to slow down, laze and lounge around ! For a change, we didn’t mind that at all.

At 9 PM, we were served a delicious breakfast spread. Then, our tour for the day began. The first place on our list for the day was the Chunnambar Beach also known as the Paradise Beach. The Paradise beach is an island beach located 6 kms from Pondicherry. To reach this beach, one has to take a boat from Chunnambar Boat House. The boats that start from Chunnambar take you on a scenic ride, coconut trees lining the coast and the blue backwaters. 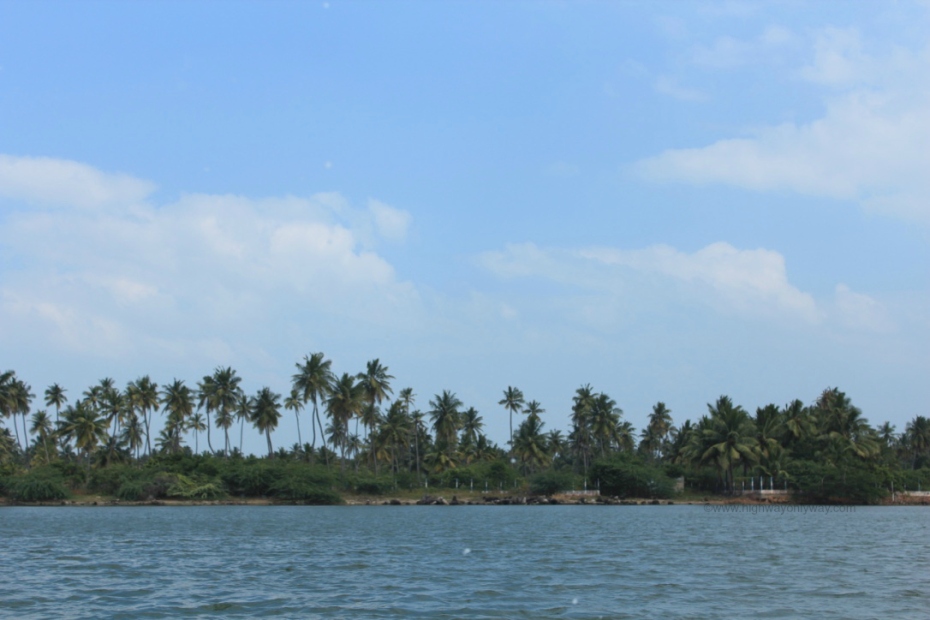 The backwaters are actually part of the Sankaraparani River or the Ginger river that joins the sea near Paradise Beach. 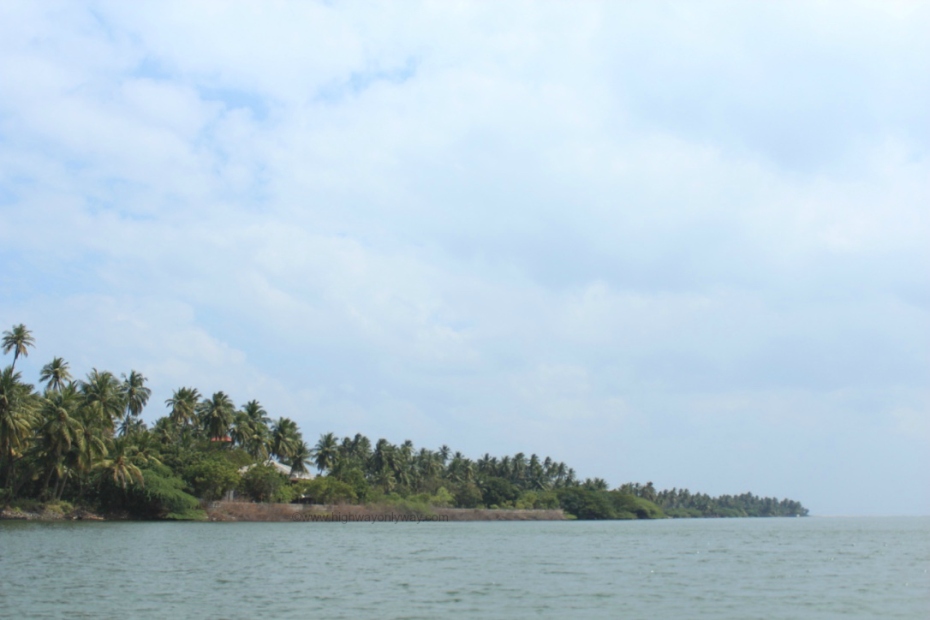 After about 20 minutes of ride in the blue waters opening into the sea, you can arrive at the shores of the Paradise beach. 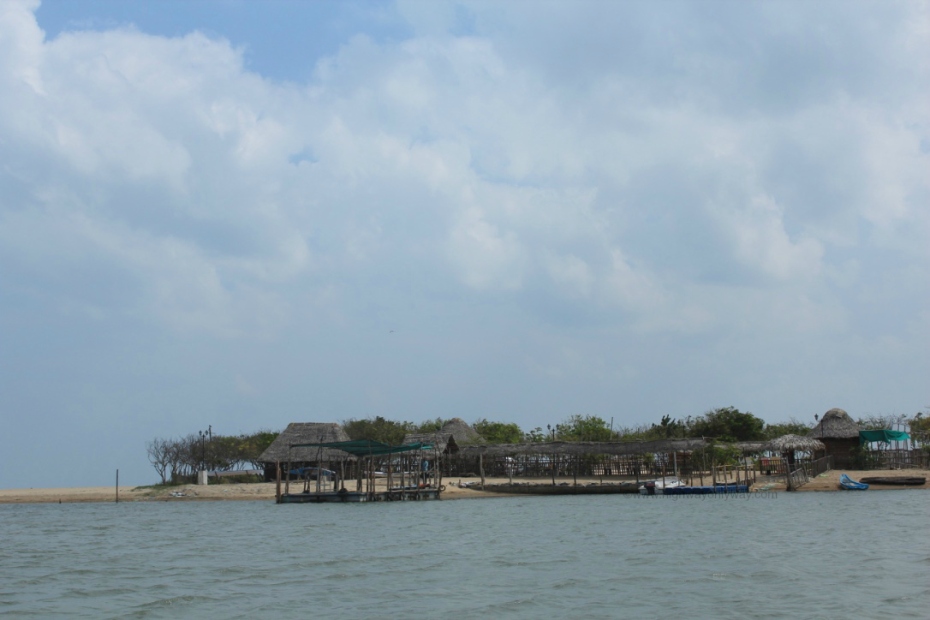 A flock of sea birds that seemed to be relaxing under the warm sun were disturbed as our boat rode closer, it was a beautiful sight to see them fly in the back drop of the open sea and the shores of an island. They were too quick for our camera to catch the scene.

Alighting from the boat, we arrived at the entrance to the island beach and were greeted by welcome boards, unlike any other beach we had seen so far.

We were as excited as the kids because we had never had this kind of an experience arriving at a beach ! The pathway at the entrance led us to the beach which had shelters on the shore to sit under and relax, again, it was something new for us. 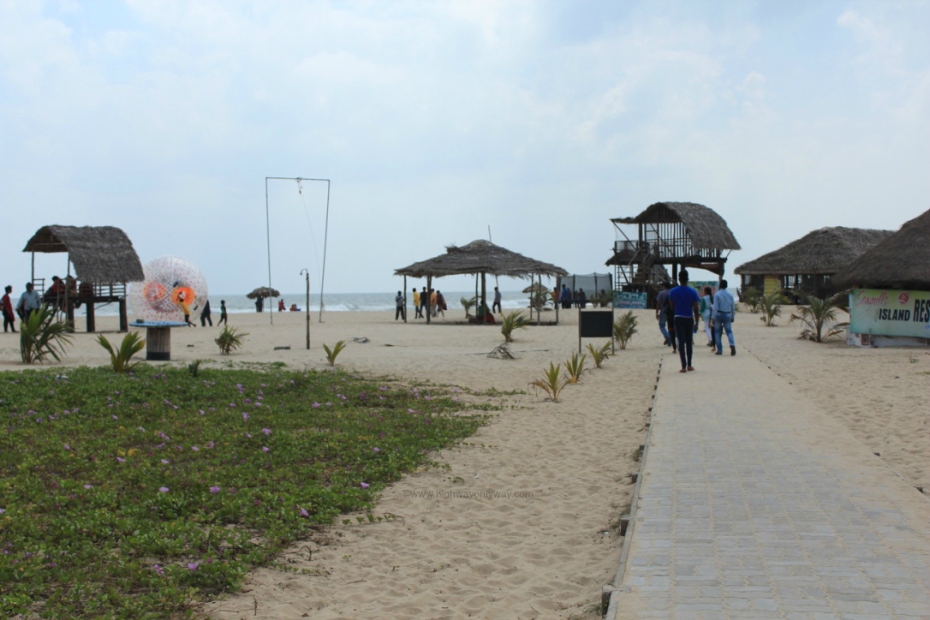 The Paradise Beach is one of the most pristine and clean beaches in the country as of now. It was around 1 PM, so there were not too many people, we loved the sparsely crowded beach. 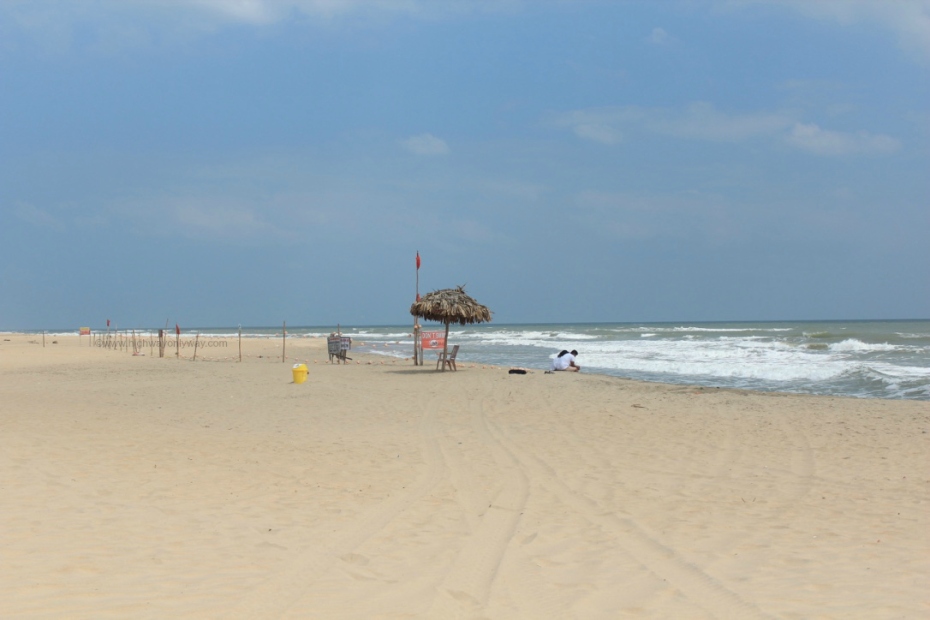 There were some water sports and ATV biking on the sand. While the kids went for a ride on an ATV bike and jumped on the trampoline, we relaxed by the beach. 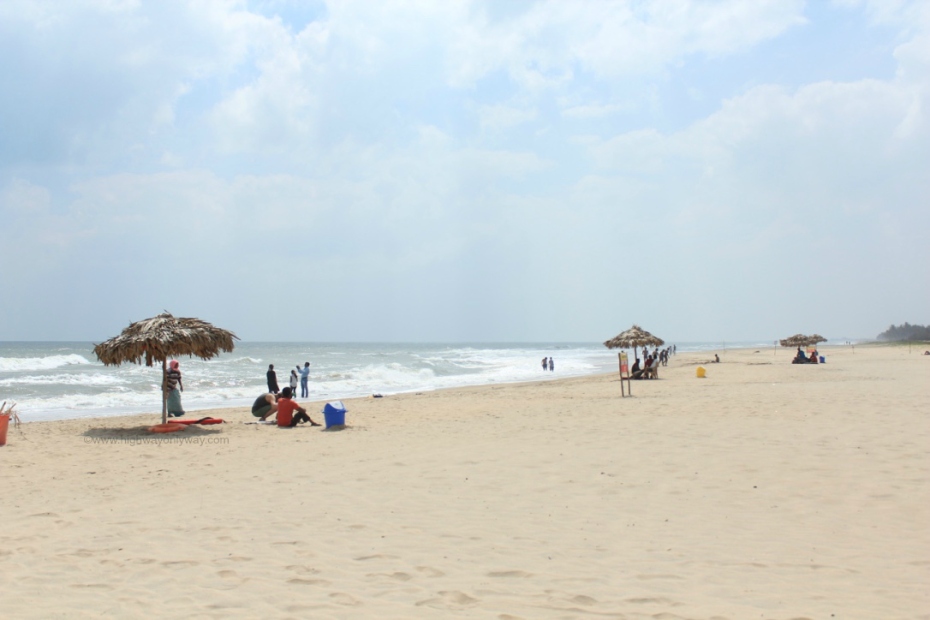 Though it was afternoon, the January heat was bearable and when you are splashing about in the water and having a good time, heat or sun doesn’t matter ! 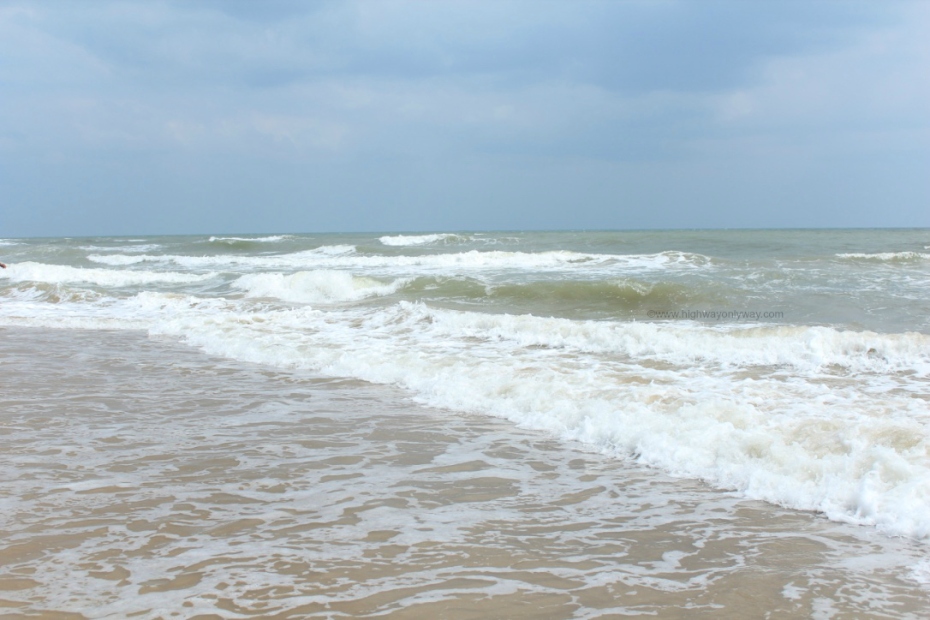 We spent a happy hour at the beach and caught the boat back to the Chunnambar Boat house. As we arrived at the boat station, we caught a sight of a house boat that reminded us of Kerala. 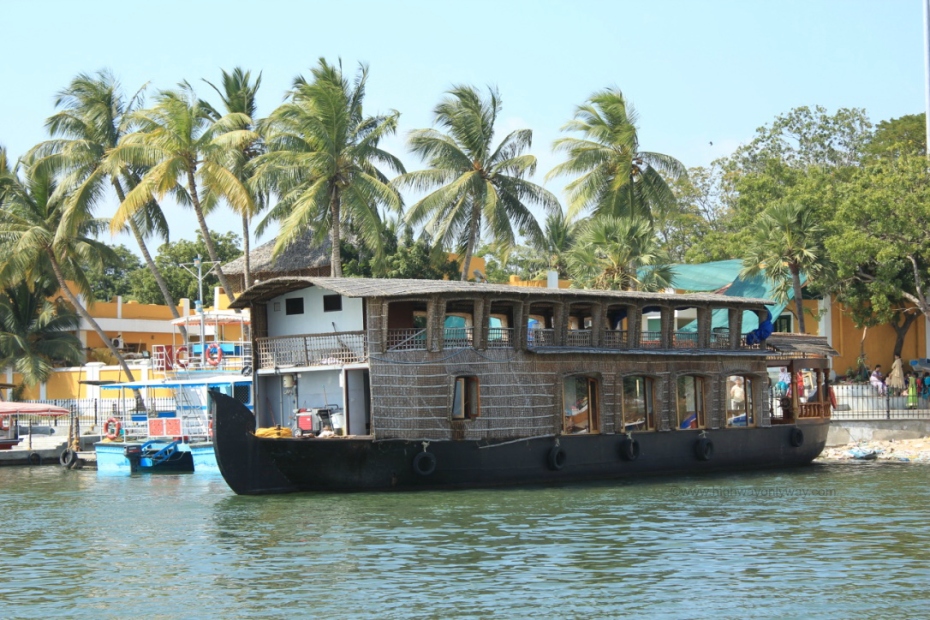 It was already way past lunch time, so before returning to Pondicherry centre, the family decided to make this history lover author happy and turned towards Arikamedu, an ancient port, very close to Pondicherry.

Sometime in the 1st to 3rd Century A.D, there was a document written in ancient Greece-Rome known as the “Periplus of the Erythraen Sea”, describing the ports and sea trade routes between Rome and other countries. This document mentions a port Podouke, which has now been identified as the archeological site of Arikamedu. When we say 1st to 3rd Century A.D, we are talking about the late Sangam Era, Arikamedu must have been a busy port at the time. Archeological excavations revealed the port town and a rich treasure of Roman coins and items of trade.

Following Google Maps and after getting confused a few times because where Google Maps showed us a road, we would only find a narrow lane ! We managed to find the place by squeezing our mighty Vento through some narrow bylanes and arrived at a desolate place that was fenced and there were two or three people lazing around who mistook us for visitors from the Archeological Department, because the actual excavation site was closed after a recent excavation and would be opened only when the next excavation session was planned even then the site would not be open for public.

At present, one can only view a few ruined structures built during the French rule of Pondicherry. 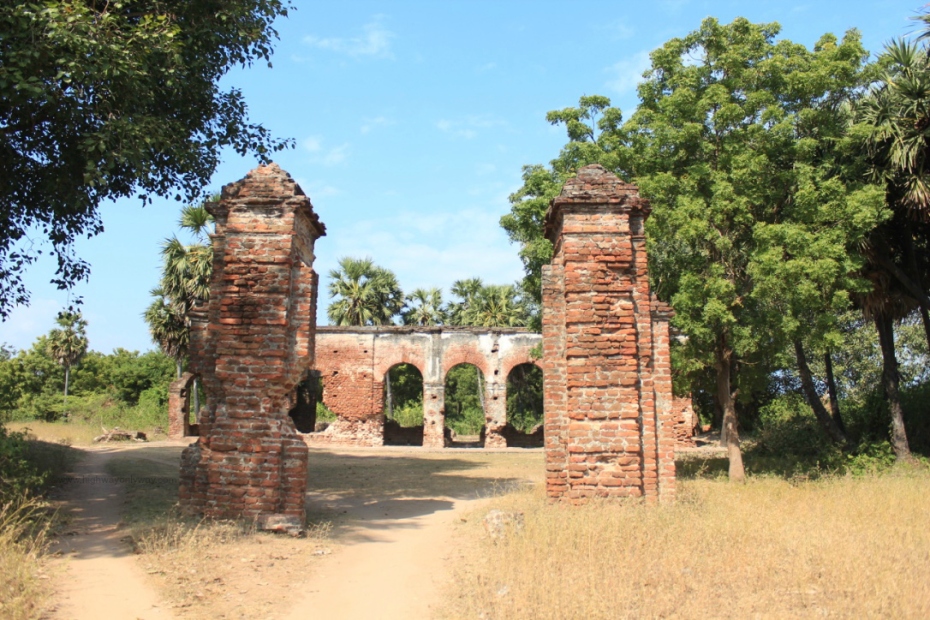 The place had seen trade activities till the 1800 AD under the French, these must be the remnants of a warehouse of that period. 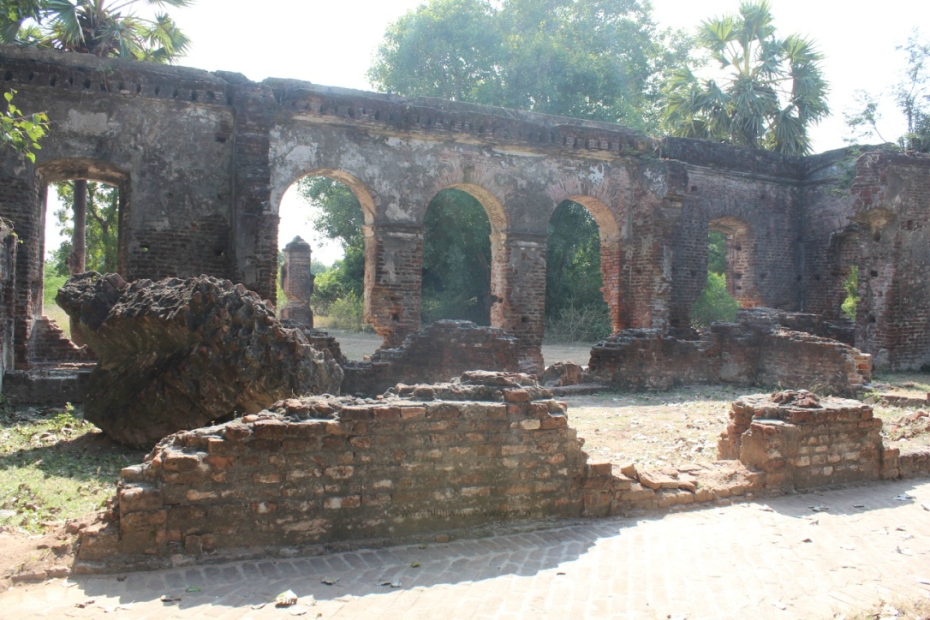 With nothing else to do or see, we left Arikamedu within 15 minutes. Though there was not much to see, for a history lover, the feeling of having stepped into an ancient site is far more important than whether the place is of any tourist importance. One could imagine hordes of traders making their way in and out of Port Podauke 2000 years ago.

It was 3.30 PM by the time we turned our car towards Pondicherry city, the rest of the evening was dedicated to a drive through Pondicherry.