12 hour round trip to Vijayawada – II – Pillalamarri Temples – There is more to Suryapet than dhabas !

For most people when you mention Suryapet, they’d start reminiscing about the time when the dhabas there were most popular and it took 6 hours to reach Vijayawada from Hyderabad ! For years we thought Suryapet was the dhaba capital of Andhra Pradesh ! A lot has changed today, the Surypet dhabas have been replaced by restaurants and food courts, the Hyderabad-Vijayawada journey is now reduced to 4 hours or less, there is the swanky NH9 and Suryapet is no longer part of Andhra Pradesh, it is now the entry point into Telangana !

The historical town of Bhanupuri

Wikipedia tells you that at some point in its history, the town was called Bhanupuri. Bhanu and Surya are different words for the Sun and Puri and Peta both mean town, interesting etymology ! The region around Suryapet as a history going back by 2000 years to the 1st Century B.C., as is evident from the Buddhist site of Phanigiri, some 40 kms from Suryapet.

As you approach the road from the highway, the Tourism Department’s signboard tells you that you are at a historical place. Note, it only says Department of Tourism, now which state’s department is that?? Was it put up before or after “T”?

Wise cracks apart, we were pleasantly surprised to see this initiative from the Tourism Department and felt like thanking them for drawing attention to the ancient temples of Pillalamarri just 3 kms from the town. A few years back, while looking for places to visit near Hyderabad, it was a revelation that Suryapet had two places of historical importance close by, one of course was the Phanigiri Buddhist site and the other Pillalamarri temples belonging to the Kakatiya times.

We reached Suryapet in time for lunch but wanted to check out the temples at Pillalamarri before that.

Not to be confused with the famous Banyan tree of Mahbubnagar also called Pillalamarri, the temples near Suryapet are located in a small village with the same name, Pillalamarri. To reach the temples, follow the direction board on the highway just after Highway 7 resto, it will lead you to a village road. The roads takes you through the village, at the end of which stands the ancient temple built by chieftains of the Kakatiya period.

A rock edict, probably talking about the history and patrons of the temple stands at the entrance.

Dedicated to Lord Shiva, known here was Sri Erakeswara, this temple is a mini version of the Rammappa Temple and the one at Ghanpur sans the sculptural grandeur. The Kakatiya style of architecture is unmistakable. 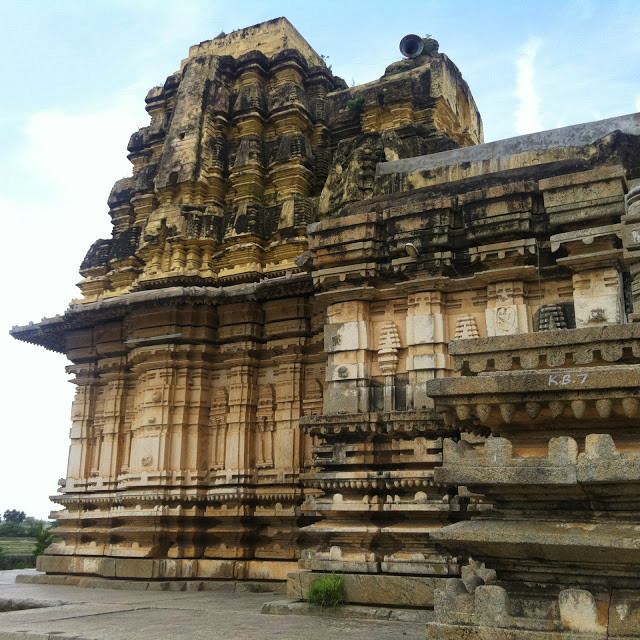 It was almost closing time when we went there but the priest was still there winding up for the afternoon. Inside the main chamber is the Shiva Linga. The priest did a little puja for us and informed us that there were 2 other temples in the village that belonged to the same era.

We went around the temple and spotted a well that is believed to be 800 years old. Though it didn’t look that ancient with some modern renovation around it, the information painted on it says so. 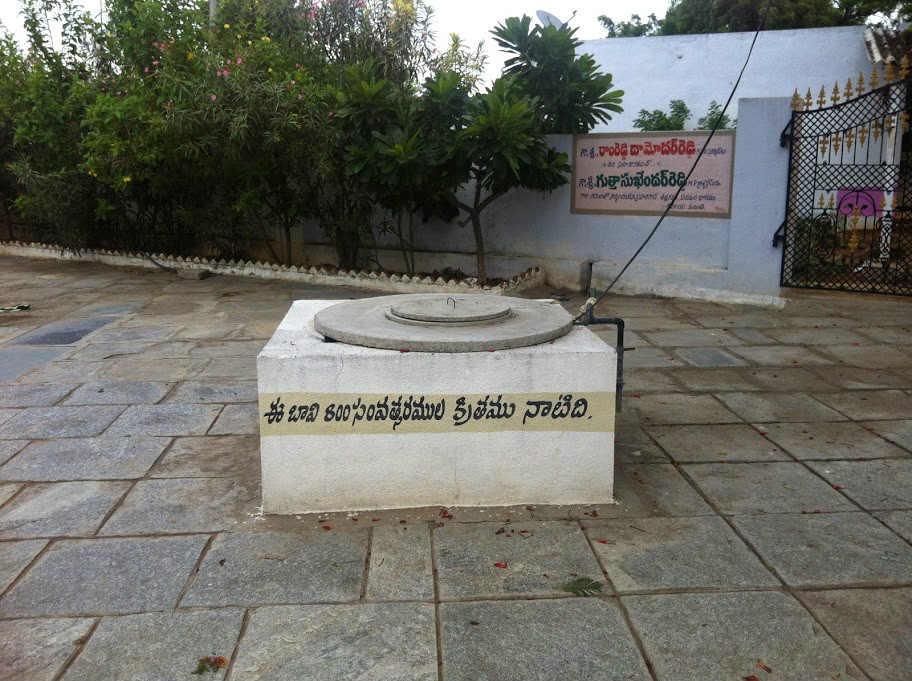 There is also a totally ruined shrine near the temple, it looked more like a heap of stones. 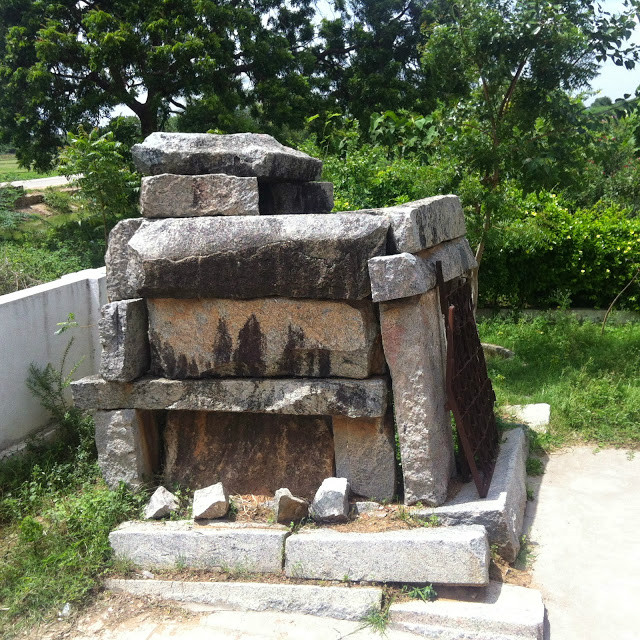 If there is one thing that is missing in the temple, it is the Kakatiya sculpture, rare to find a temple of that period with minimal sculpture. Whatever little of it was there, it still had the same designs like the 8 sided flowers on the borders found on every temple belonging to the reign.

We weren’t carrying our camera so had to make do with our mobile phone, also the ground was burning hot and we literally had to take pictures shifting from one feet to the other. After a brief visit here, disappointing the priest who asked us to make a donation for some puja, we drove to the next temple.

The tiny village of Pillalamarri is a treasure trove of historical temples, a few streets away from the Erakeswara Temple, there is a Vishnu temple, it looked newly renovated so we gave it a miss and drove the other Shiva Temple, Sri Nameswaralayam. This temple, is located in the middle of the village and people looked at us with curiosity as we walked into the temple.

The only difference is the Vimana which was either a later addition or was built in a style that was similar to the Nagara architecture.

The premises houses 2 temples and the Erakeswara temple along with these two temple form the “Trikuteswara Temples” at Pillalamarri.

These temples, unlike the Erakeswaralayam, are rich in sculpture, typical of Kakatiya temples starting from the pillared mukhamandapas.

Each of these pillars is heavily decorated with sculpture.

Time has weathered the sculpture but it can’t hide the excellence even in that state !

A rock edict is stationed in the courtyard, if only we could read it. So little is known about these temples, may be these rock inscriptions could throw some light. 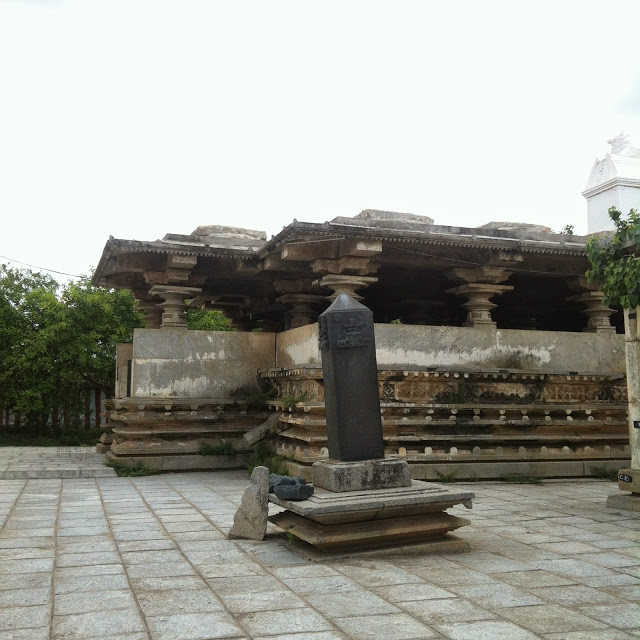 Nobody knows why these temples were built in Pillalamarri, more than 100 kms away from the Kakatiya capital at Warangal, did this place have any strategic importance like the modern town of Suryapet? We might never know, for now, young men from the village seem to be using the temple to laze around and gossip on a hot afternoon !

The hottest Biriyani in town !

After our temple visit, we were in the mood for some good food and headed once again to Highway 7 restaurant at Suryapet. There are various reasons why we love this place, we found one more this time – Ulavacharu Biriyani ! The menu card at the restaurant is very creative with its “Maya Bazaar” movie theme, their signature items have some witty phrases like the one for Ulavacharu Biriyani which says “you will drive 150 kms for this Biriyani again” ! We just could not leave the place without trying that and ordered the vegetarian version.

Our Ulavacharu Biriyani arrived overflowing from the traditionally decorated pot !

Ulavacharu is a favourite dish of the Vijayawada region and adding it to the traditional Biriyani is a delicious twist ! It was a welcome change from the normal Biriyani that we had got used to and needless to say, we loved it. If we weren’t keeping a tab on our binging habits, we could have polished off one more pot of it !

If a trip to Vijayawada or historical temples don’t bring you to Suryapet, the Ulavacharu Biriyani should do the trick. As for us, we sure are waiting for another excuse to drive 150 kms for the Biriyani !

Back on the road after lunch, we were in Hyderabad by 4.30 PM, completing a trip to Vijayawada and back in about 12 hours, a trip that had all this writer wants – good roads, great company, food and history ! All credit to NH9.

– Pillalamarri temples are very close to the highway and rather easy to spot once you drive into the village. However, finding public transport may be difficult, ideal if you are travelling in your vehicle. If you happen to be travelling on the highway and have some time on hand, hop over for a quick visit.

– These are not very popular temples so they do not have set timings. They seem to open in the morning after 6 AM close by 12 noon and again open in the evening after 5 PM.

– If you are interested in a little History project, as you travel from Hyderabad to Vijayawada, you will find some old Masjids and structures on the road side. We had read in the Telugu historical novel “Andhra Nagari” that these were built during the Nizam rule to serve as a resting place and prayer hall for armies. The book said that distance between these was roughly 11 kms. It seems this is a measure of what is known as a “Yojana”, which was from ancient times considered as the distance an army battalion could travel on foot in a day. We made note of the distance and they really were at a distance of 10-11 kms ! Next time you travel on this road, check it out.

“The content and pictures on this blog are owned by the authors of http://www.highwayonlyway.com and are not available for copying or reproducing elsewhere without any written consent from us.