Adventures in the Konkan land – X – Hospet to Mantralayam – Some History and some mystery !

Adventure sports was the main target of our trip to the Konkan region but along with the sports, we also got some road adventures for free ! Our friends who started back to Hyderabad had their share with bad roads, another group ended up with a flat tyre and had to spend the entire night on the road before reaching Hyderabad very late that morning. Our group on the other hand, had a good night’s sleep at Hospet, woke up refreshed and had a leisurely breakfast. As per our schedule, we were to drive to Mantralayam from Hospet and then back to Hyderabad the same day.

When we set out of Hospet, Google Maps showed us 2 routes, one was the road via Gangavati taken by the other cars the previous night, we ruled that out because they told us the roads were bad. On the mobile phone screen, the second one seemed decent enough, it was a state highway after all.

A chance meeting with History

Just after we crossed Hospet, following Google Maps, we realised we were only 2 kms away from the capital city of one of the greatest empires to have ruled this country, Hampi ! Though we did not have the time to make a detailed visit and Hampi was not on our list in this trip, we decided to take a deviation and make a quick visit to the nearest and the most famous temple of Hampi, the Vijaya Vittala Temple.

At the entrance of Hampi from the highway end, stood the ruined Talarigatta or the gateway, the information board next to this told us that it was an ancient version of a toll gate.

Imagine, hordes of tradesmen and visitors standing at this gate and paying toll to gain entry into the most prosperous city of its time !

May their tribe increase !

Passing through this gate, we reached the parking lot of the Vijaya Vittala Temple, a good 2 kms away from the temple site. Hampi being an UNESCO World Heritage site, motor vehicles are not allowed in the vicinity, instead there are battery operated cars to ply tourists to and fro.

These cars are operated by an all-women team, it was heart warming to see young women confidently driving the cars. We took one of the cars and chatted up with the young lady driving our car, we learnt that they were all from nearby villages and to be eligible for training to drive these cars, they had to be atleast class 10 pass. Kudos to whoever came up with this idea for empowerment of local women through employment. This is the India we dream of !

The Bazaars of Hampi

We got off the car and stood before one of the grandest display of sculptural excellence, the Vijaya Vittala Temple ! 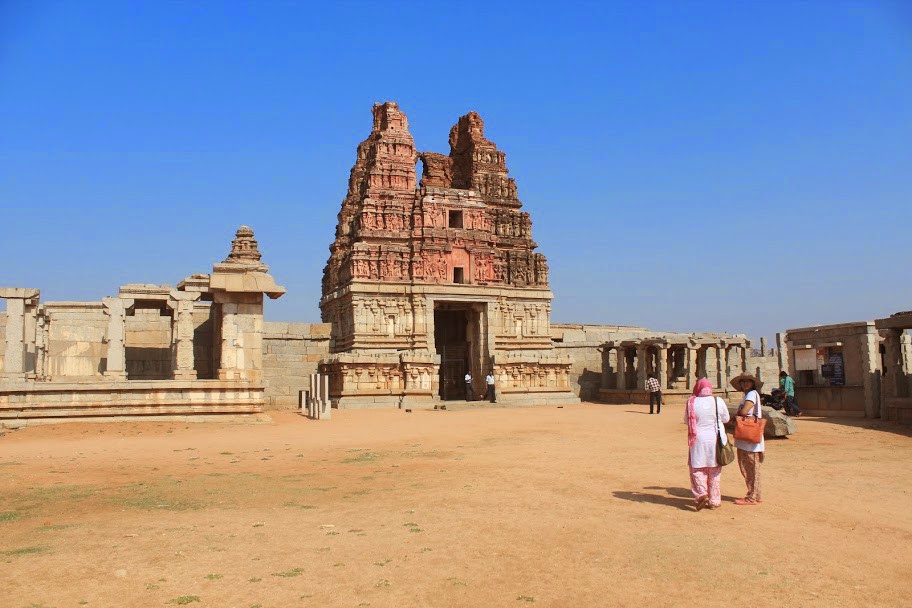 Built in the 15th Century A.D during the Vijayanagar reign, Vijaya Vittala temple was the most prominent temple and the pride of Vijayanagar architecture.

Before you enter the temple, you are first taken in by the ruins around it. These ruins were once the prosperous markets of Hampi.

The Vijaya Vittala temple market place stretches for as far as you can see, this was the centre where trade flourished. In its heyday, Hampi was probably the richest city of its times. A Telugu description of the richness of Hampi says precious gems were sold in heaps in these very markets ! 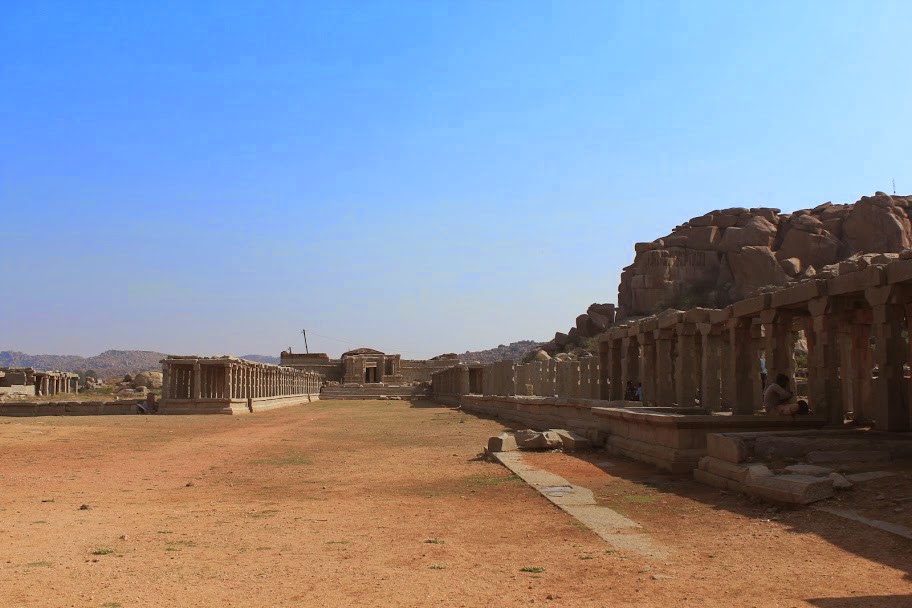 If you ever get a chance to travel back in time, make sure you stop by for some shopping at Hampi during Vijayanagar times !

Our first visit to Hampi was in 2008, since then, we have seen several temples built in the Vijayanagar style of architecture and sculpture, you could say by now, we had grown used to the sculptural beauty of the Vijayanagar temples but the moment we entered the temple compound, it felt like we were visiting the Vijaya Vittala Temple for the first time all over again, nothing can prepare you for the amazement you feel when you set your eyes on the architectural marvel !

How and where do we begin describing the temple? Do we talk about the grand pillared halls, exquisite sculpture, the magic of rock pillars of the main mandapa producing sounds of Saptaswaras?

The Saptaswara Pillars, of course, are closed for public because of the damage to the pillars caused by tourists trying to touch them and play the seven notes.

Move around the temple and you will see the entire temple cloaked, from top to bottom, in some of the finest sculpture you will ever find ! 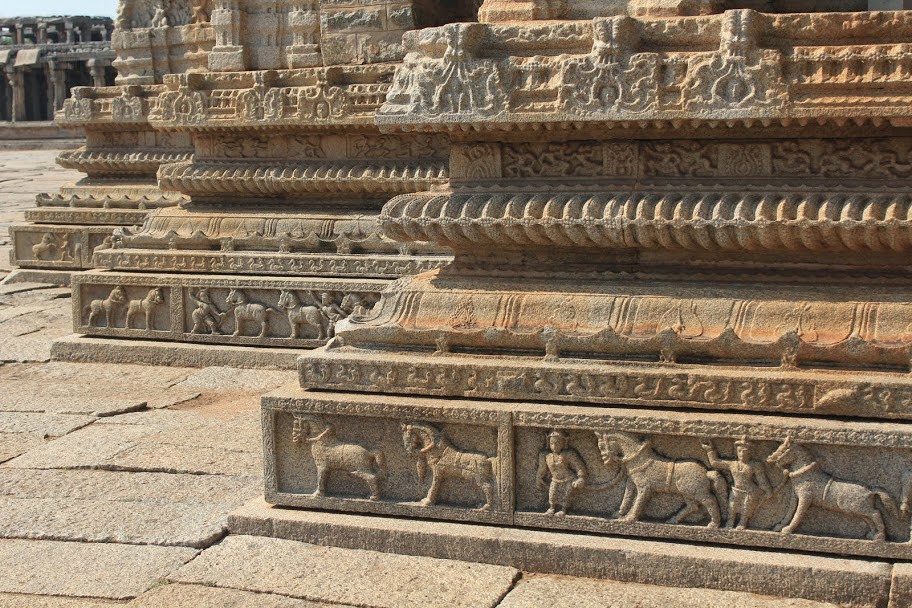 Stories from Hindu mythology and epics like the Ramayana, Mahabharata and Bhagavatham are popular themes of sculpture. Even the Dasavatharas of Lord Vishnu have been sculpted around the temple. This one is of the Rama avatara. 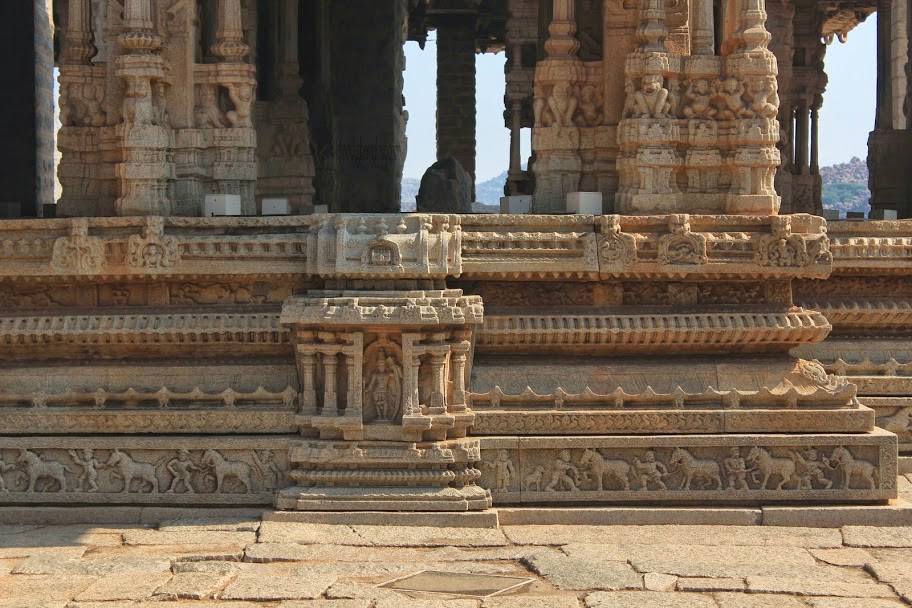 The Garbha Griha must have been witness to many a vandal attack and has caved in. There are hundreds of temples in Hampi and every one of them, except the Virupaksha Temple, is devoid of the presiding deity, all destroyed by invaders after the fall of Vijayanagar reign.

When you think of it, these temples are only ruins but why are they so beautiful that they leave you spellbound? What ancient charm surrounds them? 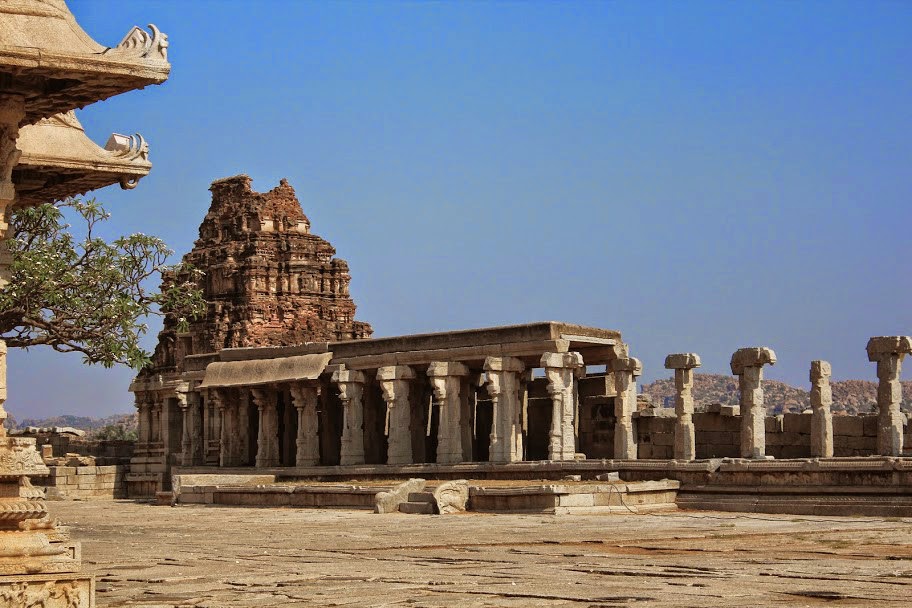 That’s not all, the Vittala temple has one more architectural gem, the stone chariot. It stands in the front yard of the temple facing the Garbha Griha and is actually the first thing that you will see at the temple. Half your time at this temple is gone in admiring this most elegant work of sculpture in the whole of Hampi and beyond ! 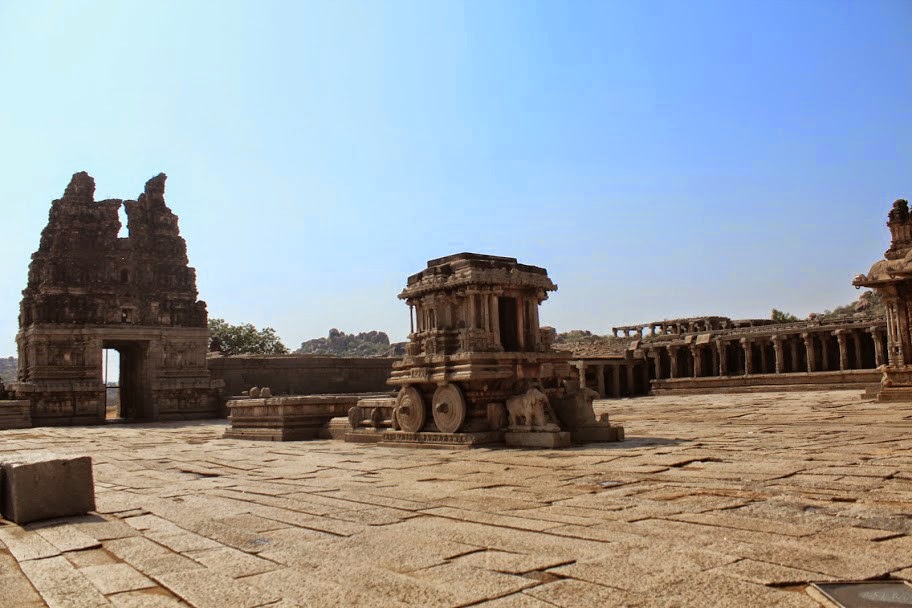 This stone chariot is the icon of Hampi. We read on the internet that this was supposed to be a shrine for Garuda, Lord Vishnu’s vehicle, almost every Vishnu temple has a shrine for Garuda facing the presiding deity. At the Vijaya Vittala temple, looks like they built a shrine to resemble a chariot and boy, did they come up with a masterpiece !

That is all we can say with our limited linguistic resources. We leave you to visit Hampi and find new words to describe these timeless verses carved in stone.

The chariot had a dome on top which fell off over time, you can find a picture of the chariot from the 1800s A.D in the Hampi museum. Check this website http://www.hampi.in for some very interesting information on Hampi.

We had only planned a very short visit to the temple to show our friend a sample of what Hampi had to offer, he got a hang of it when we realised we had spent more than an hour at just one temple and Hampi overflows with such temples at every nook and corner ! You will need atleast 2 days to see the popular ones and if you want to spend time and admire every single temple at Hampi, you may have to settle down there !!

Return of the road woes !

Our journey resumed from Hampi, religiously following Google Maps. Have you ever wondered what drives people to repeat the same mistakes despite knowing you could go wrong? That pretty much sums up our experience of following the shortest possible route on Google Maps !

A few kilometres outside Hampi, our saga with a roadless journey started. We drove through some of the most primitive roads in the country, they were not even village roads or dirt tracks, just rough soil mixed with gravel, alternating with the some of the deepest potholes this country can boast of ! We were worried that we had lost our way, initially, we laughed in excitement considering it one more adventure but eventually got tired of the bumpy ride on non-existent roads that seemed never ending. This stretched for over 100 kms, eating up more than 4 hours of our journey.

From Hampi till Siruguppa, there was not even a proper village where we could stop and ask for directions. Things didnt seem to improve even after we crossed Siruguppa, a supposedly bigger town. We were tempted to take a rash decision and head towards the longer route towards Adoni but decided a known devil was better than an unknown angel and continued limping our way till we reached the Karnataka-Andhra border.

We still haven’t figured out how Google Maps comes up with such mysterious routes !

The case of the mysterious deer woman !

Just before entering Andhra Pradesh, we passed through a village called Bapuram. We were too tired having had to skip lunch, we could not find a single shop throughout the 4 hour drive, at Bapuram, we spotted a few shops selling tea and biscuits. We stopped here for a cup of tea. While here we were curious to find some kind of a makeshift temple and some deer roaming freely on the road ! We thought they had crossed over from the nearby woods or there was some kind of a deer park. They sat quietly by themselves while people went about their business near the shops.

The locals told us that the deer belonged to some mysterious woman who settled in the village a few years back, people have come to believe that she has some magical powers and seek her blessings. We couldn’t meet the woman but found the whole thing very amusing, especially when they told us that the deer ate Parle-G biscuits. We bought a few packets and fed the deer, some very politely accepted them.

There was this particular deer, that you can see in the above picture, he didn’t seem to like us interfering, refused to accept any biscuits, then he tried to attack us with his antlers, giving us a scare and making us run for cover inside our car ! It didn’t take us long to escape from that place ! One more adventure out on the road ! We took the wrong route, had a tough time driving through terrible roads, missed lunch, were exhausted but, if we hadn’t done all that, we wouldn’t have come to Kowthalam and had this very interesting experience !

Much later after our trip, during a conversation with one of our acquaintance, who has relatives in the village, we can to know that the mysterious woman is mentally unsound and can be found throwing stones at people and shooing them away. People believe she has “psychic powers” to tell you lucky numbers for lottery and several people go to her for advice ! Nobody knows who she is or where she came from ! Some mystery that.

Our date with bad roads extended all the way till we crossed into Andhra Pradesh at this spot. This is supposed to be the official state border !

It was a relief to find sign boards that we could read easily after struggling to understand Marathi and Kannada over the last 4 days !  Being election time, the policemen at the border check post were suspicious of us, wondering what we were doing on such deserted, less frequented roads. We could have told them our story but we were too tired and they were too bored to give us a second glance after checking our car boot and finding nothing interesting !

Thankfully, the roads got better in AP and we got back on track to the main highway towards Mantralayam.

– We’ll give you only one tidbit, never attempt a drive between Hampi and Mantralayam !

– Our trip to Vittala Temple was a hop in hop out kind of visit, so we weren’t exactly focusing on useful information to visit the temple, we could have it as a story for another day when we make a detailed Hampi trip.