What happens when living beings come in the way nature’s fury? Dhanushkodi, as it stands today, gives you the answer – complete devastation. That is the story of Dhanushkodi. The nature that nourishes us can also destroy us and when it does, we have no defence. What remain after that are only stories to tell.

A trip to Dhanushkodi is usually to see the ruins of the the once bustling town, destroyed in one night by tidal waves during the cyclone of 1964. For years, there was nothing in the ruined town, only a few fishermen families, lived or went there for their catch. Today, the scene seems to be changing.

After our visit to the tip of land, the ruins were next on the list. When you do a search on the internet for Dhanushkodi, you will find pictures of the lonely church standing in the midst of the sandy terrain with nothing in sight near it. We do not know how old those pictures are but today the place doesn’t look so desolated. Inflow of tourists has brought commerce to the once deserted town. At the entrance of the what remains of the main road of Dhanushkodi, stands ruins of a water tank. 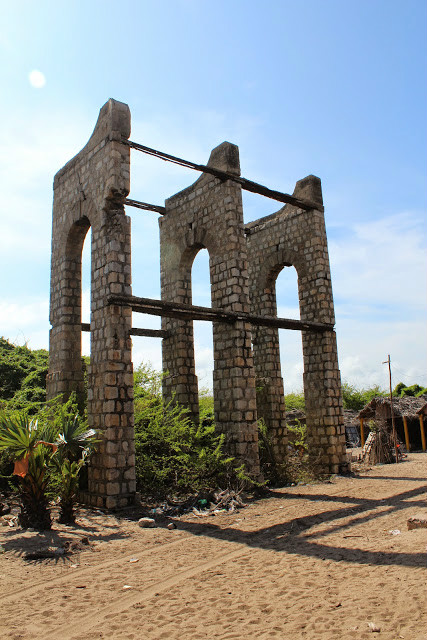 The entire place is covered by sand, it looks like a desert suddenly cropped up in the middle of coastal plains. A short walk from the water tank is the church. There is no clear record of when the church was built but we read somewhere that it church is atleast 200 years old and was probably built by the Portuguese.

We were quite surprised to find that it did not look like what we saw in the pictures and that is because, a lot of thatched shops have come up near the church. The place is now abuzz with activity, tourists, shops selling souveniers, soft drinks and snacks. Only the outer structure remains and inside you can still see the altar. 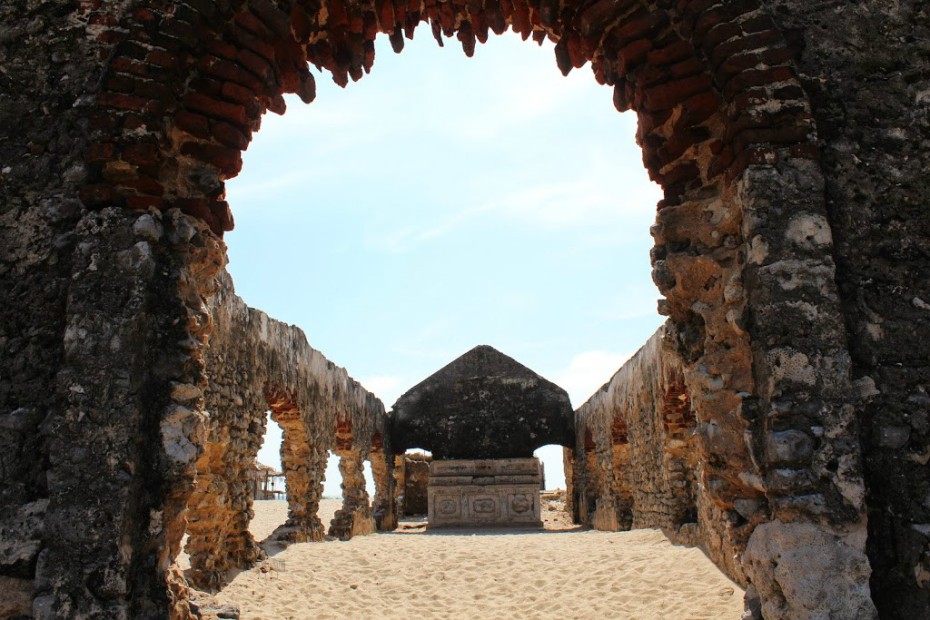 Outside the church, we spotted this old man with an amputated leg, Munuswamy, he was talking to a few people checking out the church. 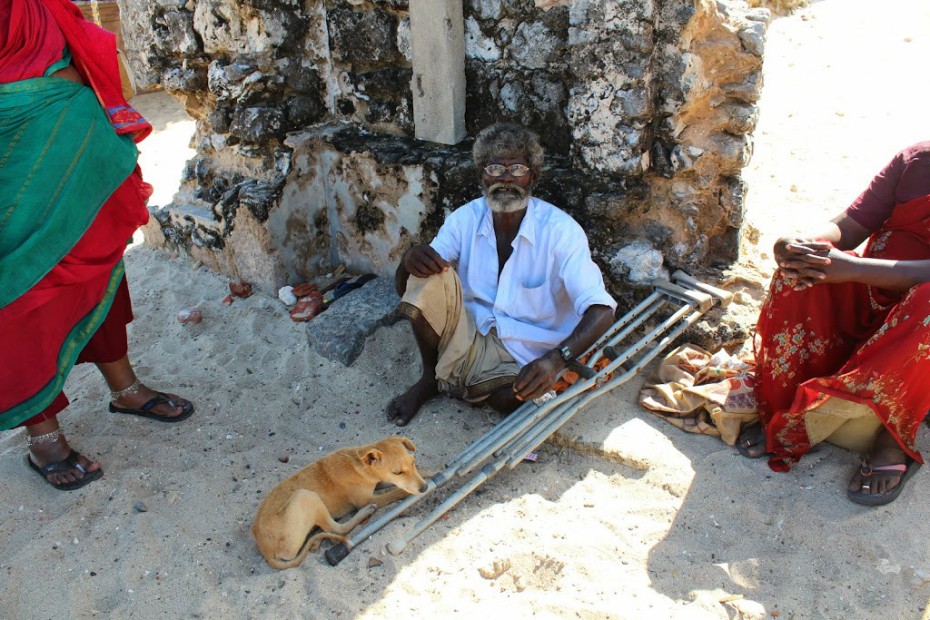 We struck up a conversation with him and came to know that he was one of the witnesses and survivors of the 1964 calamity. He told us how Dhanushkodi was the main commercial centre while Rameswaram was only a pilgrim place. Dhanushkodi was a busy town and a sea trade link to Sri Lanka, it even had a port. Munuswamy was 12 years old when Dhanushkodi faced the anger of the sea. He comes from a family of fishermen and he said the sea was their Goddess. When Dhanushkodi was submerged, a lot of people, refused to leave the place. Munuswamy and his family took shelter in the port. He very philosophically told us that all those who tried to run and escape were taken up by the sea, while those who decided to stay back with the hope that their sea would protect them, somehow survived ! He told us the town of Dhanushkodi stretched some 2 kms further away from the church and now all that lied below the sea.

It was almost 2-3 days for the relief to come and then they were shifted to Ramanathapuram where they lived in government shelters. They returned to Dhanushkodi to resume their lives as fishermen after 2 years. 40 years later, once again, Munuswamy was witness to another disaster, the 2004 Tsunami. He was out fishing and when the tidal waves came, he was thrown off the boat and injured his leg which had to be amputated. Since then, he and his wife have been somehow making both ends meet. We did not know how to react, a blank feeling came about to us.

The 1964 cyclone struck Dhanushkodi on 23rd December and the 2004 Tsunami occurred on 26th December, is it mere coincidence that both these major disasters happened exactly 40 years apart?

We looked ahead at the remaining ruins, further away from the church. Somehow, we did not want to go and visit them as some exhibits. They were all once living building where trade and commerce flourished, where children went to school, where people lived in prosperity.

We decided we did not want to go and explore all the ruins. We were tired after our visit to the Sangam. To give you an idea of what to see in Dhanushkodi, there is a board listing the ruins which serves as a guide. 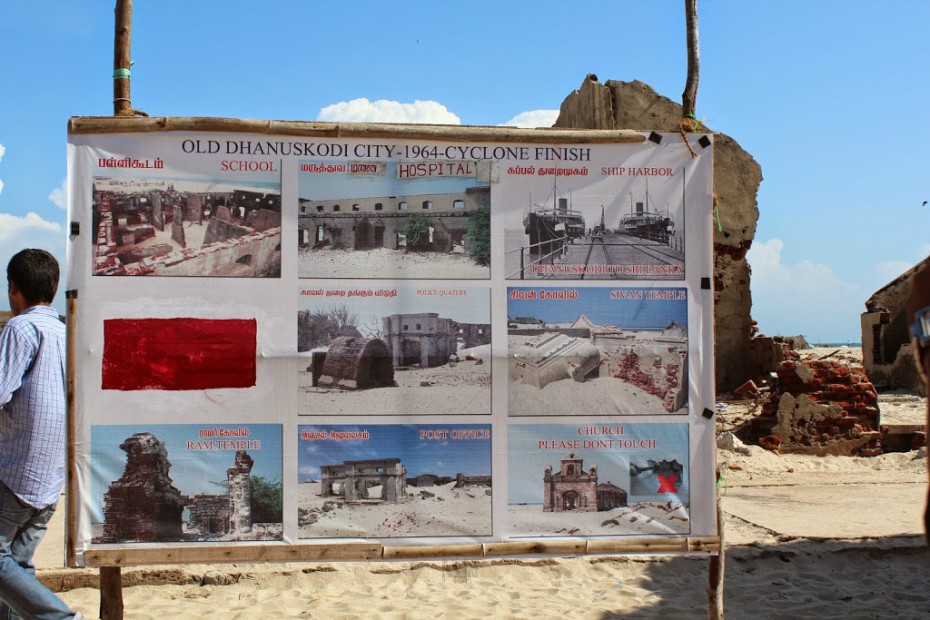 It was almost 3 PM and quite hot, we stopped to have some tender coconut water. The coconut seller too had stories to tell about life of fishermen, his parents had perished at sea, the life of a fisherman is at the mercy of the sea, he told us.

The visit to Dhanushkodi was a philosophical experience, almost spiritual even, not because it was the land Lord Ram walked on but because here more than anywhere else, whatever you call it – Nature, God, Divine power seems to be calling the shots and you don’t have a choice but to surrender yourself to it.

Are what we call disasters really that? Is it nature’s fury or just nature going about her business and we somehow manage to come in her way? A strange thought occurred to us as we left Dhanushkodi and started back to Rameswaram.

Rameswaram abounds in legends from the Ramayana and there are temples, ponds, hills where various events of Ramayana are believed to have taken place. One such place is the Kothandaramar temple, believed to be the place where Vibhishana was crowned the king of Lanka after Ravana was killed by Lord Rama.

The temple is located off the Rameswaram – Dhanushkodi road, on a little islet out in what look like backwaters. There is a very picturesque road over the backwaters leading to the temple. 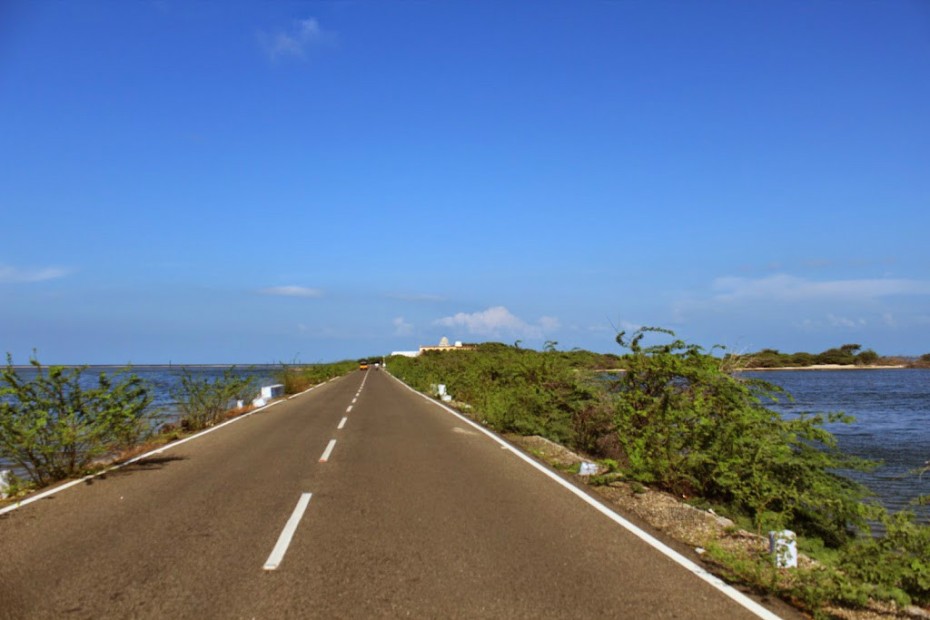 During our visit 14 years ago, this road was deserted and lonely. Today there are a lot of vehicles plying on it carrying pilgrims from Rameswaram.

The temple is a small one and seems to have been renovated very recently. It looks more like a meditation hall, complete with the cool sea breeze, total silence and peaceful environs. 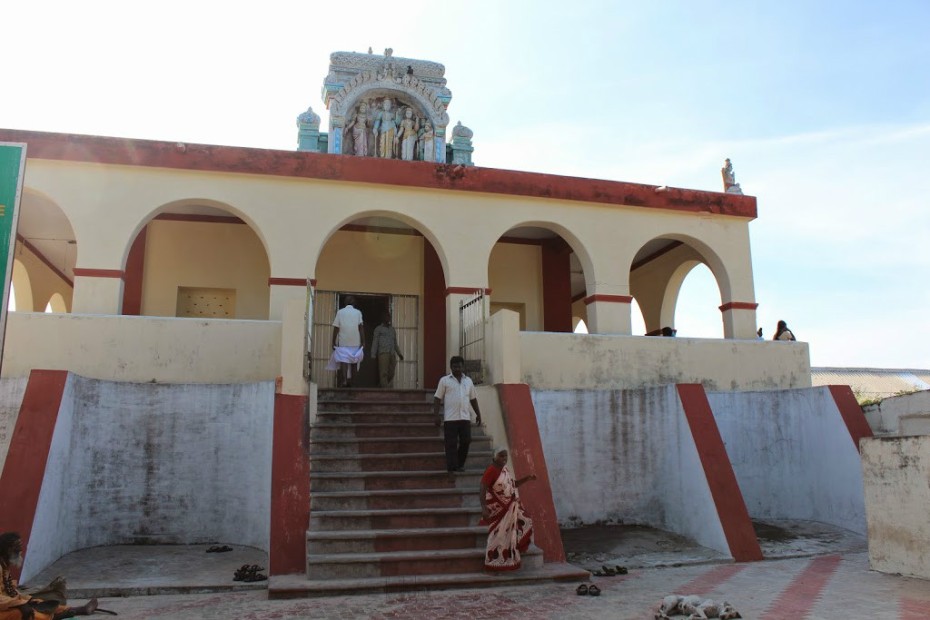 It is very pleasant to walk around the temple premises. You get a very pretty view of the sea and Rameswaram town, the huge tower and the Rameswaram temple.

Our long time wish of visiting Dhanushkodi was fulfilled. We started off with our plan to somewhere else but events seemed to flow on their own and we ended up visiting Rameswaram and Dhanushkodi, was there some unknown divine force guiding us or nature taking it’s course or just random happenings?

With these thoughts, we reached Rameswaram. Another crazy idea was brewing in our minds.

– There are no timings to visit the ruins of Dhanushkodi but advisable to visit them and be back before dark.

– All jeeps/vans are more than willing to take people to the ruins. It is to the Sangam that people seem to have a problem.

– A vehicle package to Dhanushkodi usually includes a visit to the Kothandaramar temple. Normal autos also ply between Rameswaram and the temple. There are a few more temples around, there are sign boards showing the directions.

– We are not sure about the temple timings but like every where else, finish your visit before dark.