Mahakuta literally means “Great group”. Located 15 kms from Badami and 10 kilometers from Pattadakal, Mahakuta is a group of temples dedicated to Lord Shiva. It sounds ordinary when you say it like that but visit these temples and you will realise why the Chalukyas proudly called it the Mahakuta.

We did not know much about Mahakuta until we drove to Badami. Karnataka Tourism has sign boards that giving directions to places of interest within close radius. You can find these boards almost on all highways in Karnataka and when driving you would know if you are closer to a tourist place, a great idea to generate tourist interest. We discovered Mahakuta this way. While driving to Badami, we saw sign boards to Mahakuta alongwith Badami, Pattadakal and Aihole. When in doubt, consult the internet ! We quickly read up on Mahakuta and found out the place also had some ancient temples. We decided to check it out if we had time.

When we started from Pattadakal, it was almost 5.45 PM, we did not have any hopes of making it in time to visit the Mahakuta group of temples. The bumpy road between meant it would take us atleast 20 mins to cover those 10 kms between Pattadakal and Mahakuta but still, we wanted to take a chance.

We reached Mahakuta and found a parking lot but the temple or group of temples were nowhere to be seen. The place looked deserted but luckily for us, we were told the temple was open. Open, alright but we didn’t know were the temples where, then we were directed towards an archway that further led to a few steps with a huge ancient wall running beside them, a ruined mandap and that was it ! It was only on the second look that we found an entrance in the wall. Inside the walled enclosure were the “great group” of temples of Mahakuta. Just outside the temple complex, is this small shrine for Ganesha inside a tank. We read somewhere that the tank is almost waist deep and one has to wade through the water to go to the shrine. Looks like you are no longer allowed to enter the tank.

The temples at Mahakuta were built around the earliest times of the Chalukya Dynasty, probably during the time of the first king Pulakesi I. The antiquity of these temples was evident from the first sight we got of Mahakuta temples.

A Siva Linga being excavated ! That described Mahakuta for us, an ancient site, now in a dilapidated condition and being restored. Even in such a state, the complex had an air of grandeur about it.

There are around 7 temples at Mahakuta complex. All the temples are dedicated to Lord Shiva and we also read that there are hundreds of temples within the vicinity of Mahakuta, all dedicated to Shiva !

There is also a tank called the Vishnu Pushkarini, where a four-faced Siva Linga is located inside an old mandap in the tank. We did not know about the Siva Linga until we returned from the trip and read about it, blame it all on the short notice for the trip ! The small mandap in the above picture houses the Siva Linga. It seems there is also a Siva Linga underwater. There were a lot of people swimming in the tank and making a lot of noise. The temples seemed to be oblivious to everything as they stood silently, ravaged by time.

Winning the test of time

All around, renovation and restoration works were in progress. 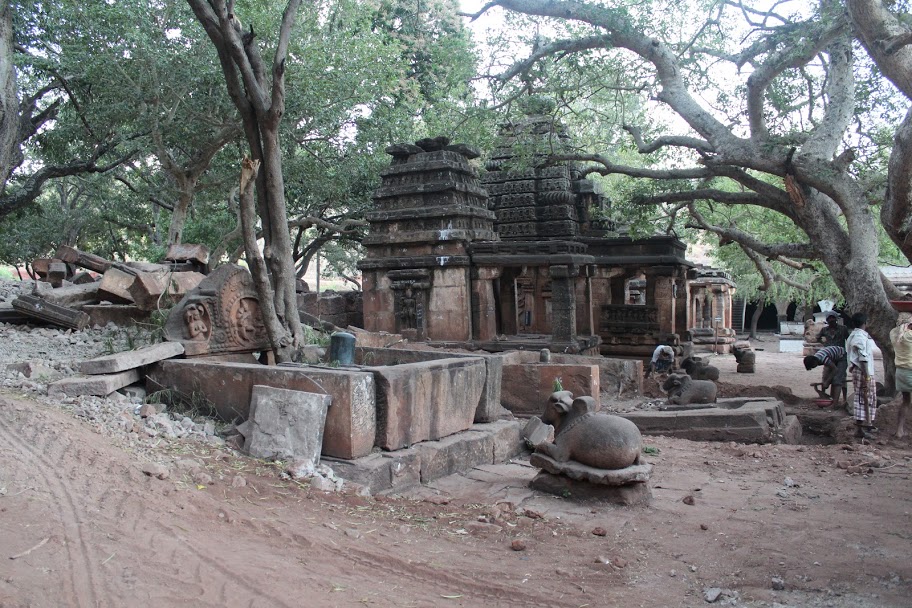 The Nandi of one of the temples has been dislodged as part of the restoration works. Notice how this Nandi shines as if the stone was polished !

The Mahakuta complex has a lovely green cover, Banyan and other huge trees surround the temples.

Ancient, ruined temples dot the entire area of Mahakuta, some within the walled complex, some outside. If you go exploring further outside the complex, you are sure to find many more temples, we do not know if you can go exploring, though !

Like most Chalukyan temples, the temples at Mahakuta have their share of sculpture, it is not as exquisite as the other temples but it has some interesting ones like this Ardhanareeshwara.

Most of the temples in the complex are crumbling, check how this one is leaning back, the poor dears are tired after standing upright for a millennium and a half !

We paid a quick visit to Mahakuteshwara and left the place as darkness began to set in. Mahakuta, despite the sad state it stands in, is a must visit because it is one of the early remnants of the Chalukyas and also to see how these temples are standing tall and fighting against time ! We do hope the restoration works give them the energy to continue enthralling future generations without disturbing their ancient charm.

As we drove back to Badami, the crescent moon decided to grace our evening, a perfect finish to a day when we saw places and monuments so beautiful that it hurt our eyes !

We wound up the day with dinner at Royal Deluxe hotel, this hotel had turned us out the previous night because it was too crowded and we decided to show them our gastronomical strength in revenge ! The food was great and we decided to forgive them. We planned to leave early the next morning, visit Aihole and leave for Hyderabad.

Mahakuta is 15 kms from Badami and 10 kms from Pattadakal, it is located in between these two places.

The temples are open from 6 AM and close well after 6 PM, however, to see their beauty, you need to visit them when light is still visible.

There is no place to stay at Mahakuta, we heard the temple offers some accommodation, Badami is the best place to stay.

As with all places in the Chalukyan circuit, it is better to have your own vehicle or hire a cab/auto, buses seem rare.