In all these years of travelling, our experience has been that, the less known, out-of-the- tourist circuit places turn out to be the ones that amaze you the most. Mahurgad was one such place, we really hadn’t expected to be so taken in by the small, quiet, village by the hills.

We were up early on the last day of our Marathwada trip to trek to the Mahurgad Fort. It was a fresh morning as we drove up the hill to the fort, parked our car and began ascending the fort.

From where we parked our car, we could see the Renuka Devi temple and one of the bastions of the Mahurgad Fort. 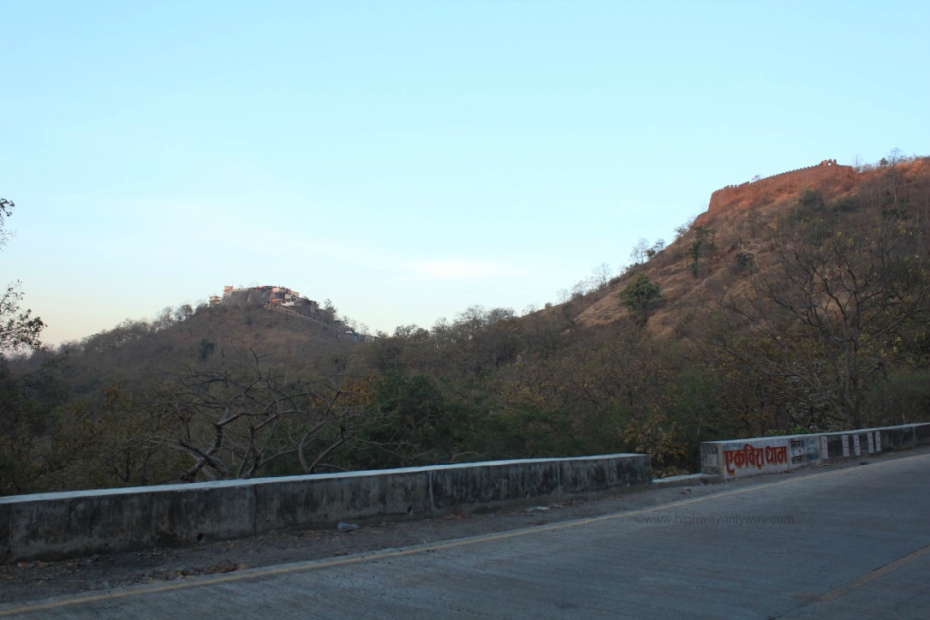 Mahurgad fort was probably a strategic fort of the Yadava dynasty that ruled over a major part of Maharashtra during the 12th-13th Centuries A.D.

The first part of the trek has steps leading up to a level of the hill fort, by the time you reach the half way mark, you will be out of breath.

But, the breaks to catch our breath almost took our breaths away as we saw the rising sun light up the hill of the Renuka Devi temple and the far end of the fort.

Where the steps ended, there was a small shrine and a dried up pond beside it.

There were a few people going about their work, we gave it a miss and proceeded further, there is a nicely laid out pathway to the top.

A short walk on this pathway and we found ourselves surrounded by the woods, there was no other sound except that of the breeze and our own breaths. 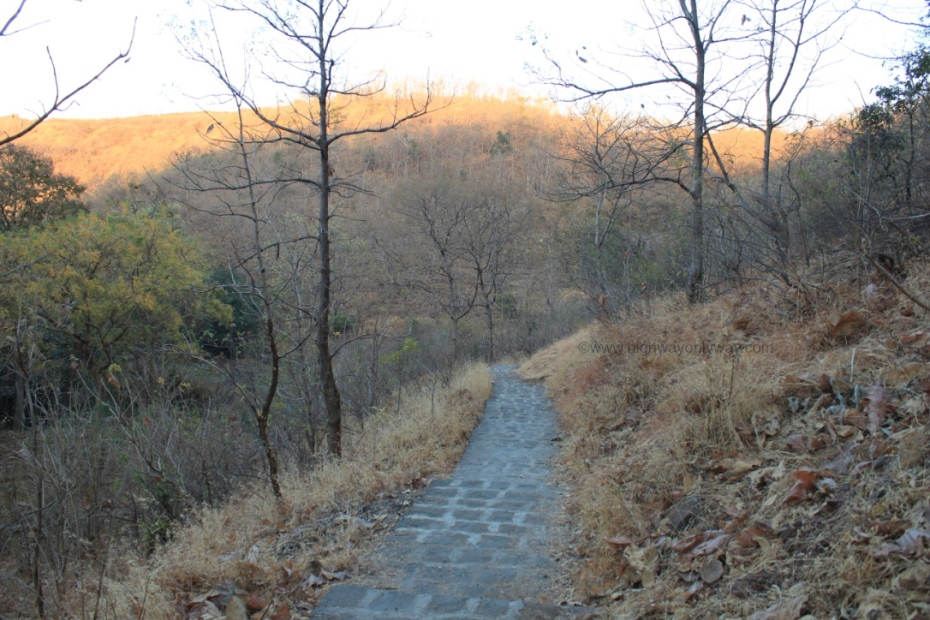 Somehow, more than happiness, moments like these fill you with contentment, the feeling of “this is all I ever want” !

After walking a short distance, we arrived at a ruined gateway like structure that opened out to the edge of the hill. 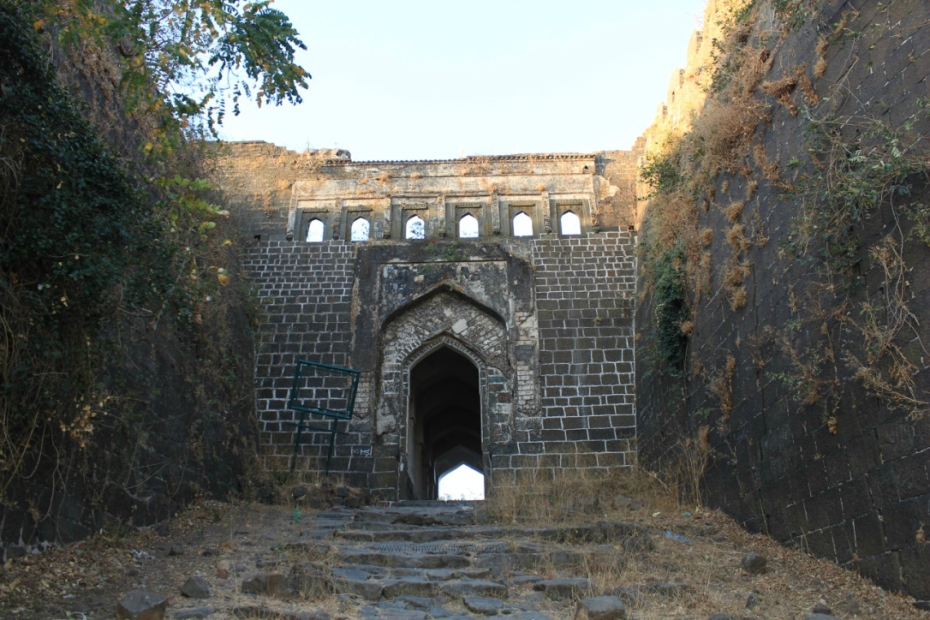 The walls supporting the gateway are massive, they look like two hills themselves ! 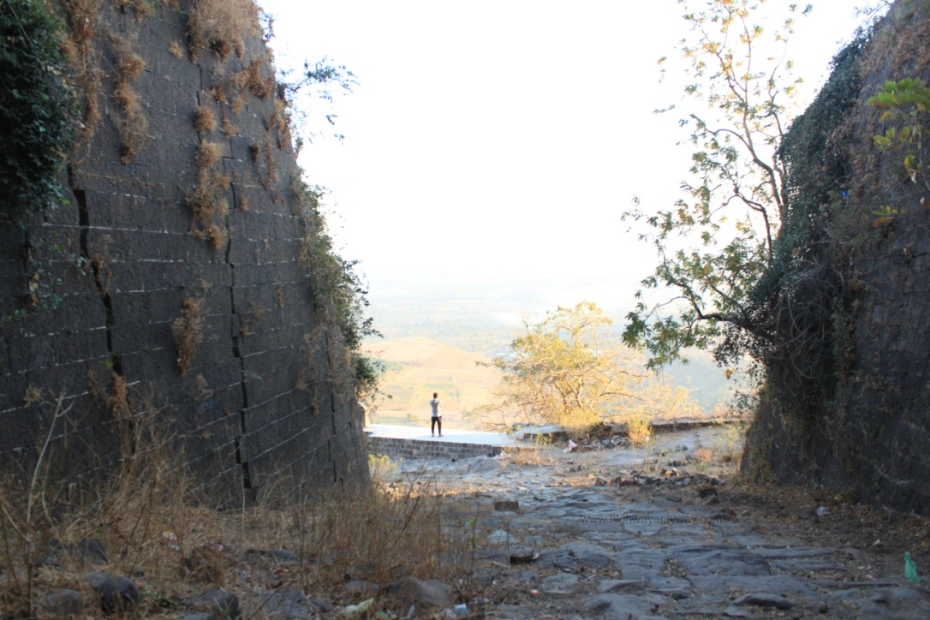 The fort wall runs along the edge overlooking the village of Mahurgad. 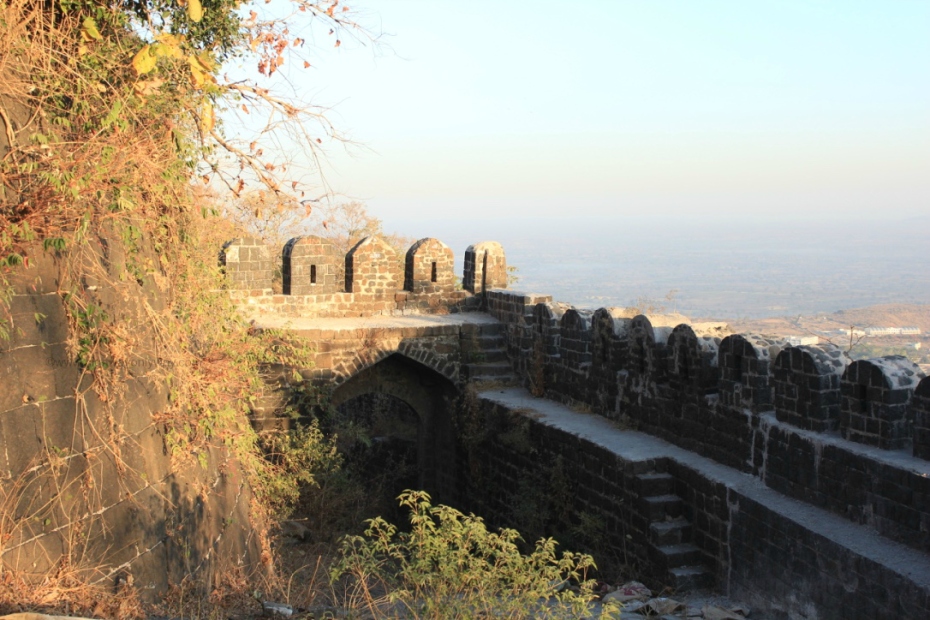 We perched ourselves on the wall and lost count of the time as we sat down gazing into the distance.

Not much was spoken, it was time to just to sit and let everything whirling around in your mind settle in until you take a deep breath and let go !

After about half an hour, breakfast pangs began to set in and we decided to head down and get going with the rest of our day.

While climbing back, we caught a glimpse of the Renuka Devi temple again.

We were for a moment tempted to try and go to the far end of the fort but it look too long a trek and we gave up the idea. May be next time we would, Mahurgad is too charming a place to visit it just once !

Back at our hotel, we were ready for to continue our journey. We had breakfast at one of the many small hotels dotting the main road of Mahurgad, the Sabudana Kichidi that we had there made our day !

Leaving Mahurgad, we drove towards Unkeshwar, an ancient Shiva temple, the main attraction of which is a hot spring located in the temple premises.

From Mahurgad, Unkeshwar is only a 40 kms drive but it takes about an hour’s drive on some deserted roads. It was a hot day and we could actually see the heat outside as the dry landscape stretched before us. We spotted this lone bullock cart ambling on the road.

Even sitting in the comfort of our car, we found the heat too much to take, one cannot begin to imagine how hard it must for this person.

The road got even more deserted closer to Unkeshwar, we followed Google Maps religiously, when we reached a stretch like this, we even began to think if it was safe, “what if there were cannibals?”, someone asked, “would we be lead to human sacrifice?”, wondered another !

That’s how eerily beautiful the landscape was and the experience of driving on this road – haunting !

Finally, we arrived at Unkeshwar, a teeny village, deep in the dry forests of Marathwada. Until you actually reach the village, one wouldn’t believe that a village could be located in these remote areas. In fact, we could hardly find any houses. We drive directly to the temple. 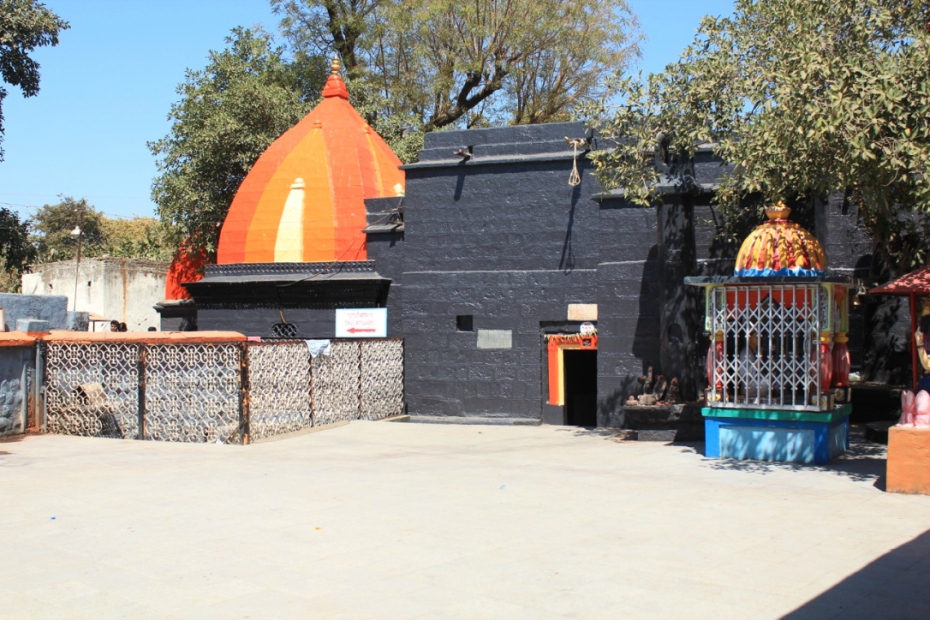 This is the renowned temple of Unkeshwar and the grilled enclosure is where the hot spring is supposed to be. Since there were no good rains this season, we were told the hot spring has actually gone dry. 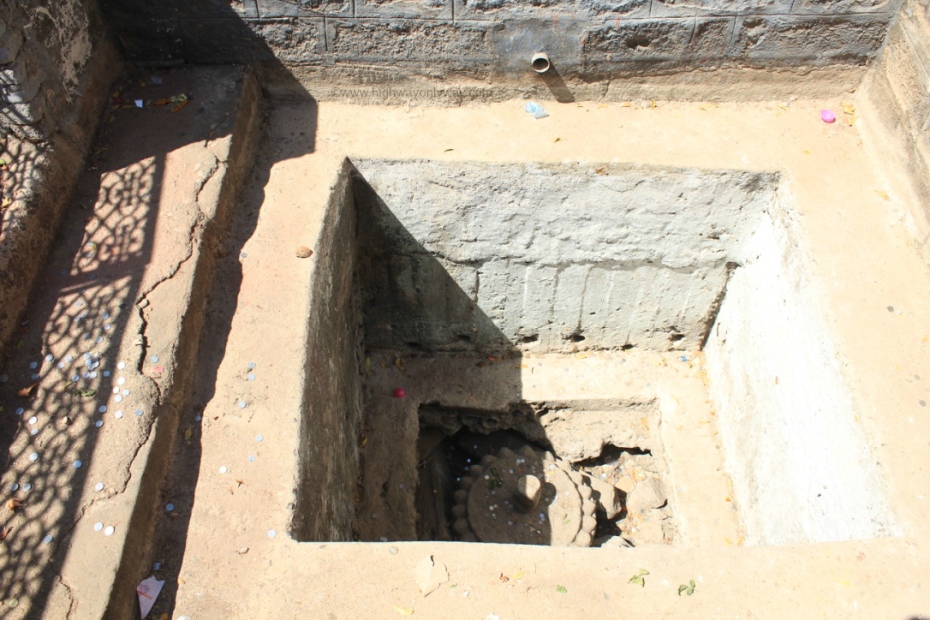 Come rains, the water oozes from this spring and fills up this pool. We were a tad disappointed that we couldn’t see the hot spring.

Before entering the temple, we were asked to wash our feet and were directed towards a tank. The water was surprisingly warm, we thought it must have been the heat. We then went inside the temple and had a darshan of Lord Unkeshwar, Lord Shiva as he is worshipped here. Nobody seemed to have an idea about when the temple was built or its recorded history, we were told it has been there for 800 years or so.

There was an old lady cleaning the temple with water and we asked her about the hot spring. She told us the pool would be full only when there were good monsoons, however, the entire premises of the temple had sulphur deposits underground and the ground water was usually warmer than the normal water. She asked us to wash our feet with water from a pipe that drew water from underground and true to what she said, the water was very warm, almost like water from your geyser for a warm shower !

That is why, we were told, there is an Ayurvedic skin disease healing centre at Unkeshwar. The sulphur content in the water is believed to have healing properties, it is not just a religious belief, some research has gone in to show that the water could help healing some skin ailments.

The centre is located within the temple premises with an information desk giving you details of the diseases they treat, success stories and they also sell some health products.

While we were there, a family had just arrived from somewhere in Adilabad to get their son treated. It then struck us that Unkeshwar was more famous for the skin treatment than the hot springs or the ancient temple ! Out of curiosity, some of our guys purchased a few products but haven’t checked if they worked !

As we were planning to leave, the people at the temple asked us to stay back for a while and have the meal that is offered to pilgrims and patients. We were tempted but decided to start back as we had a long drive back home ahead of us.

So, that was our first brush with a hot spring, we were very excited by the hot water emerging from underground, the earth and its geology is fascinating !

A scenic farewell to the trip

From Unkeshwar, it was going to be a 375 kms drive back home. We started around 12 Noon, for the second time during this trip, the roads were a surprise. We had hoped for some worst roads till we reached NH44 but it turned out that the roads were not just decent but very picturesque.

The drive continued through the dry forest areas with absolutely no vehicular traffic except for our Alto. Here and there, strained by the long tour, the car threatened to go on a strike as the locks opened and closed at its their own will. We switched off the AC, rolled down the windows and travelled like we did in the 1980s !

Close to Adilabad, we spotted this sign board with the distance to Tirupati ! We were quite boggled because Tirupati is no where nearby.

We just settled to think it was some divine intervention ! 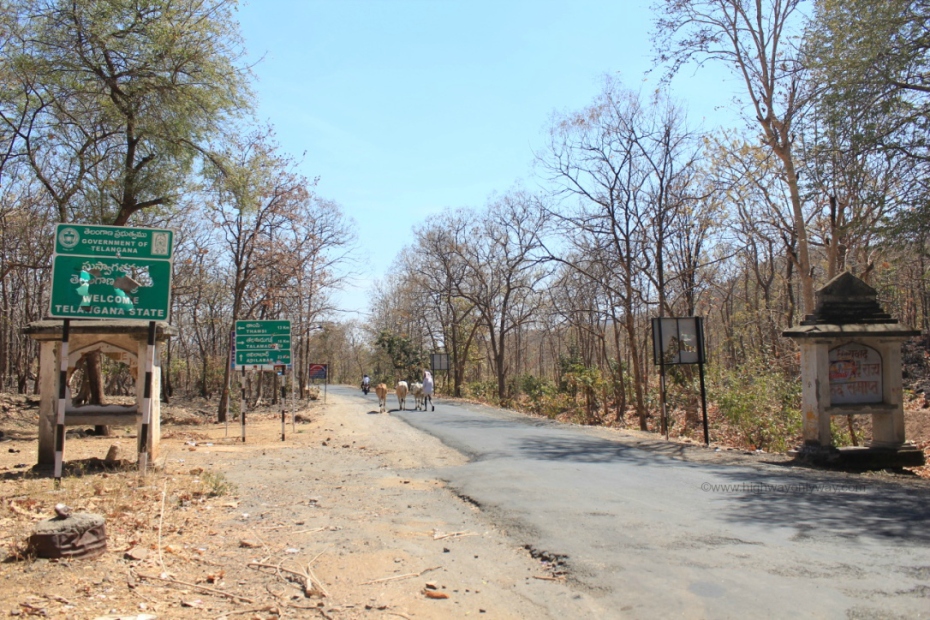 Just beyond the border, the road width and colour of the tar had changed, it is always amazing how contractors have such precision only when it comes to ending the road construction !

What really caught our interest was the old farmer walking his cattle, while we stopped to click this picture, he simply walked across the border, completely unmindful of the fact that he was entering another state ! If you keep political maps aside, it’s the same land, same nature. May be humans would have done better without political demarcations.

A few kilometres from there, we hit the buttery smooth NH44, coming from the dusty, dry village roads, it felt like a sudden gush of wind hitting your face ! 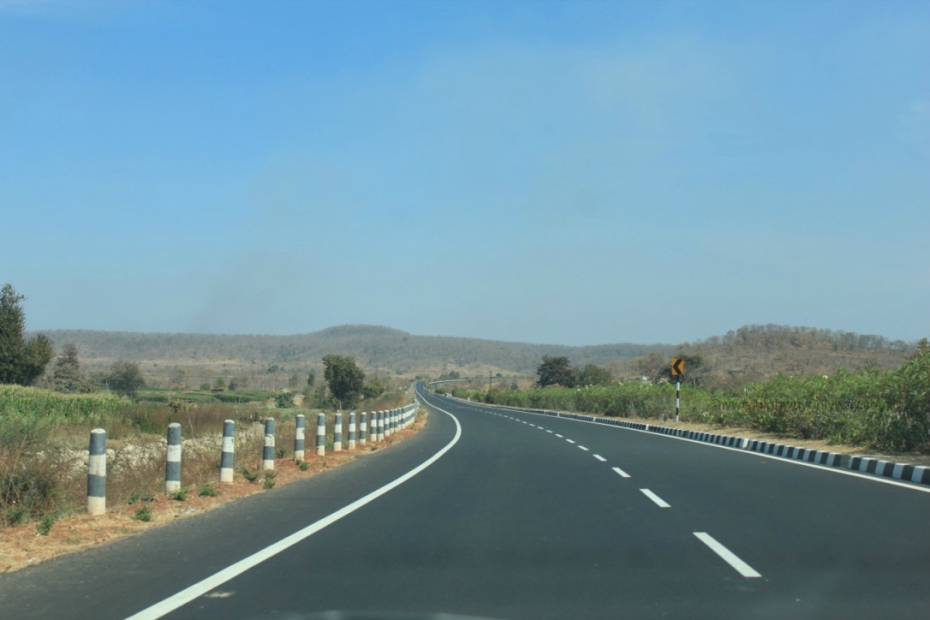 This road is every road tripper’s dream highway !

We should have ideally stopped for lunch at Adilabad but we didn’t want to deviate into the city and hoped to find something closer to the highway but it turned out that we didn’t find a single hotel/dhaba any where. The highway bypassed Nirmal and Nizamabad too and thankfully, we finally spotted a decent looking hotel a little after Nizamabad. It was past 3 PM and we were too famished to even register the taste of the food, we simply wolfed it down.

The remaining journey was a cruise and we reached Hyderabad, just in time for a light dinner. To Nanded and Mahurgad – we’ll be back for more sometime in the near future !