Road trip to the edge of India – VIII – Madurai to Hyderabad – A two day road cruise !

Day 4 of our trip marked the beginning of our 2 day journey back to Hyderabad from Madurai. While returning from Rameswaram the previous evening, we hit upon the idea of taking the Madurai-Chennai-Hyderabad route instead of the Bangalore route. We chose the Chennai route, though longer by about 100 kms, because, we could stopover at our hometown Nellore. That way, we could catch up with family, take a different route and also save on accommodation and food expenses by staying at home. Sheer genius ! Don’t you think?

Before beginning our journey, we had to visit the Meenakshi temple at Madurai. There was no way we could leaving Madurai without visiting the temple, that’s the reason why we came back to Madurai from Rameswaram. We weren’t too keen on taking the ECR route in the first place.

So early in the morning, the first thing we did was visit the temple around 7 AM, our 4th visit and 2nd in within a span of 16 months. When the Goddess of Madurai commands, you cannot say no !

We have already written about this magnificent temple during our visit to Tamil Nadu temples in 2013. So, this time we bring you a picture of the temple tank. Cameras are not allowed but you can take pictures on your mobile phones by paying a fee of Rs.50/-. However, clicking pictures is not allowed inside the Sanctum Sanctorum.

The sun was just rising and it was a beautiful sight as the morning sun rays lit up the tank.

A quick special darshan later, we walked around the massive halls, pillars and mandapas, amazed as ever at the architectural wonder of the Meenakshi Temple.

We then visited the 1000 pillared hall and shopped around at the market place along the corridors. Our visit to the temple was done by 9 AM.

Outside, we had a cup of filter coffee along with some crunchy vadai, we couldn’t have asked for a better breakfast !

Connecting the cultural capitals of TN

By 11 AM, we packed up and started on our marathon return journey. Our plan was to reach Nellore for the night, 623 kms, 9 hours Google Maps told us.

Just as we left Madurai, we were greeted by the Yanaimalai Hill or the Elephant Hill. You could call it the Great Wall of Madurai because this granite rock hill stretches for more than 2 kms like one giant fort wall !

We checked the internet for some information about the hill and came to know that is was  a popular spot in Madurai for trekking and that there were a few Jain temples on the hill. We did not have the time to stop and check the hill, so we drove on, clicking pictures on the move.

The Madurai-Trichy drive is literally a cruise, the 130 odd kms, can be done in 2 hours, even with a decent speed. The NH45B road is excellent and the traffic does not hold up your time for too long. Soon, we were crossing the Kollidam/Coleroon River and the Kaveri at Srirangam. In the distance, we could see the tall Gopurams of the Srirangam temple, there seemed to be some maintenance work going on because the Gopurams were covered with tarpaulin sheets, how do you cover 236 feet tower with tarpaulin sheets??

While driving on the highway at Trichy, we spotted this sign board. 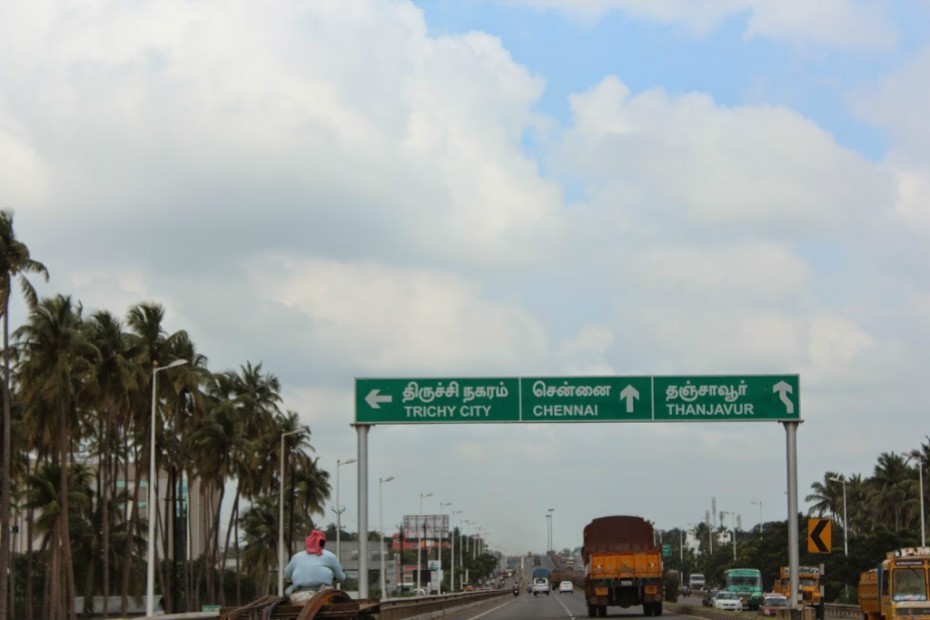 Trichy, Chennai, Thanjavur captured in one frame – the 3 cultural capitals of Tamil Nadu, connected by NH45, clicked from a car driving from Madurai, the oldest living cultural headquarters of Tamil Nadu.

We stopped for lunch at Hotel Ariyaas a short distance after crossing Trichy. We had lunched here during our previous TN trip and loved the food. Once again, the Tamil Nadu thali so good, we lost count of how much we ate, we even found it difficult to get up from our table ! If you ever travel to Trichy by road, make sure you stop for lunch at Ariyaas. It is right on the Trichy-Chennai highway, so you cannot miss it.

NH45 between Trichy and Chennai is yet another dream road – 330 kms in under 4 hours with a refreshing cup of coffee at the famous Kumbakonam Degree Coffee shops.

We reached Chennai around 5 PM and straight away ran into a group of morons who insisted on honking constantly at the signal, bumped into our car and then picked up a argument with us for no reason and then zoomed off in the most rash manner. Our blood boiled but we know better than getting into fights with people with empty space inside their heads ! We ignored them and resumed our journey on NH5.

As we entered the Chennai Bypass road, we spotted the sign board, “Nellore”, a loud cheer erupted !

There is nothing like seeing the name board of your hometown after days, travelling some 2000 kms through strange cities and towns !

In the days of yore, when we were kids (we are that ancient !) and lived in Chennai, NH5 was like a second home, every other holiday weekend, we would be driving on the highway between Chennai and Nellore. With the 6 laned highways, the landscape of NH5 has changed but here and there the old memories do peep out like the Central Prison at Puzhal outside Chennai, the Red Hills reservoir, the bridge at Kavaraipettai which collapsed one fine day and a make shift bridge built over it, this writer still remembers heart stopping moments while crossing that iron bridge. Today, of course, there is a 6 lane modern bridge.

The mango orchards on the TN-AP border, Chengalamma temple at Sulurupeta were all familiar sights, every trip, a visit to the temple was a must. Also, there was a spot near Nayudupeta where the red mud road, the heavy traffic and red dust had covered the trees and houses around and everything used to look red ! Then, we would have to stop for eternity at the railway gates near Nayudupeta, with the new age over bridges, now, you simply drive over them. Those days, there were no bypass roads and we had to drive through the town. Now, you don’t even realise you have crossed Nayudupeta until you see the dry Swarnamukhi river, this is one thing that hasn’t changed over the years !

As you near Gudur, you will find a line of Palmyra trees abruptly in the middle of the road. In the days of double roads, these trees bordered the highway, as the road was expanded on either side, they have now become a part of the divider, you would think someone has done a good job at highway landscaping ! One should thank the road builders for leaving them untouched.

No memory is complete without the memories of food. Back in the 1990s, there were hardly any food options, we had a favourite roadside hotel near Gummudipundi called “Durga Hotel”, today that hotel is far away from the highway, hardly visible from the speeding cars. Our next mandatory stop used to be Hotel Murali Krishna near Nayudupeta bus stand, we can still remember the taste of their dosas ! With the highway bypassing the towns, we have not seen any of those hotels in ages, they must have all become big restaurants now.

Cut to 2015, the NH5 is dotted with swanky food joints, you have the Cafe Coffee Days, snack corners near every town and the latest in the list of eating joints is this highway resto, Amaravathi near Gudur.

We had heard about the place from family but were quite taken aback to see such a “posh” highway resto. If the NH9 can boast of “Highway 7” at Suryapet, NH5 is not far behind with “Amaravathi” !

We had a cup of refreshing coffee here before heading home at Nellore by dinner time.

What a feeling it is to take a break and wake up in your ancestral home in the course of a long journey ! We had planned to get going by 10 AM but ended up relaxing with family and lazing at home till lunch time. We started back to Hyderabad around 1 PM, Nellore to Hyderabad has become a pleasant, enjoyable drive, especially since the NAM Expressway came into being. We are talking about the Narketpalli-Addanki-Medarametla Expressway that connects Hyderabad to the NH5, technically making it the official Hyderabad-Chennai highway.

This route has become our favourite now and we managed to clock our consistent timing of 8 hours between Nellore and Hyderabad including breaks at Ghar Dhaba near Ongole and Vivera near Narketpally, that is usually our timetable on this route. We reached Hyderabad, feeling no strain at all, initially, we were apprehensive about a 2 day drive but it felt like we had just gone on an evening ride on the highway ! All thanks to NHAI for the awesome roads everywhere.

The other car in our team had reached Rameswaram when we left Madurai and drove from Rameswaram to Chennai through the night, stopped on the roadside to catch a few winks near Chennai and resumed their journey from Chennai to Hyderabad after driving continuously through one more night before reaching Hyderabad ! Someday, somebody from that car will tell their part of the story.

Here is our route plotted on the map:

Close to 2600 kms across 4 states over 5 days, we had driven to the edge of our land but we suppose, we are still at the starting point of all journeys that we plan to make across this amazing country !

If you ever plan to drive from Rameswaram to Hyderabad, you can take the Madurai – Bangalore route, which the shortest or the Chennai route via ECR too, however, we heard ECR is a rather cumbersome drive because of the traffic. If you want to break your journey, you could halt at Krishnagiri or Nellore as they have economical stay options compared to Bangalore or Chennai.