If you are an avid traveler, you automatically become a passionate photographer. You become the kind of person who puts off fellow travelers by spending hours at a place trying to get one perfect picture !

In July, we purchased a Canon DSLR camera through a friend who lived in the USA, the deal was too good to let go. After an impatient 3 month wait, finally, in November, the camera landed in India through another friend and by a twist of fate, the camera ended up in Khammam and for 10 days we were in the dark about its whereabouts. When we managed to get through atlast, we had enough of waiting and decided to drive all the way to Khammam to collect our camera. People found it ridiculous to drive 300 kms to pick up a camera but then, some people just need an excuse to hit the road.

A drive to Khammam also meant a visit to Bhadrachalam, one of the popular pilgrim centres and a key place in the story of Ramayana.

A Saturday afternoon saw us driving down to Khammam on the Hyderabad-Vijayawada highway. This highway, being the busiest one in the state, the drive was tiring with heavy traffic, diversions and 4 lane work in progress upto Suryapet. The road conditions improved as we diverted from Suryapet towards Khammam. We reached Khammam around 9 PM after a 6 hour drive.

We had to search for the location to collect our camera and we drove around the entire town of Khammam for an hour. By the time we found the person, collected our camera and found a hotel to check in for the night it was 11 PM (we asked the policeman for a “lodge” and he gave us “the” look !)

At 7 AM, the next morning, with our new camera in tow, we drove to Bhadrachalam, 120 kms from Khammam. The two lane road is decent and the drive is enjoyable, enroute you pass by Kothagudem, known for the thermal power plant and Singareni Collieries. The drive to Bhadrachalam from Khammam takes about 2 & 1/2 hours. Bhadrachalam does not have a rail connection, so one has to take the road from Khammam. We reached Bhadrachalam by 9.30 AM. We stopped for a quick breakfast at the APTDC Haritha Hotel.

Bhadrachalam is an important pilgrim centre, the famous Sita Ramaswamy Temple is located here on a small hillock on the banks of the Godavari. 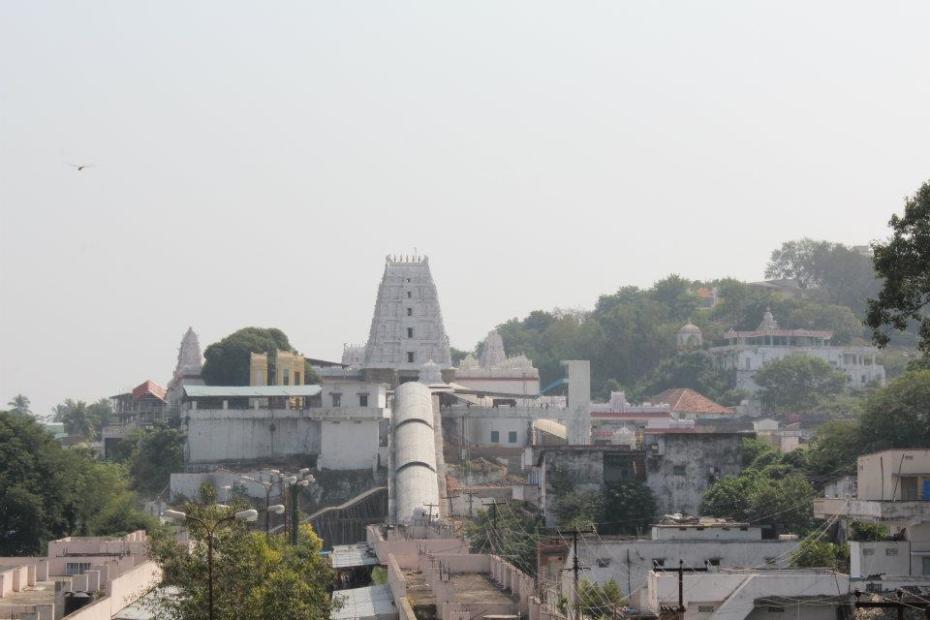 The temple here has a very interesting history. The temple was built around 1674 AD by the legendary Bhakta Ramadasu. Ramadasu, born Kancherla Gopanna, was the Tehsildar of the area and great devotee of Lord Rama. He used the Tehsil’s tax revenue for building the temple at Bhadrachalam and making ornaments for the deities. He was imprisoned for misappropriation of funds by Thanisha, the ruler of Golconda in Hyderabad, one can see the prison where Ramadasu was imprisoned in the Golconda Fort even today. Ramadasu composed the famous Ramadasu Keerthanas during his 12 year term in the prison. According to legend, Lord Rama appeared before Tanisha in disguise and repaid the amount used to build the temple to secure the release of Ramadasu ! Ramadasu Keerthanas are a musical treasure of South Indian classical music.

The temple was crowded, the darshan was like any other famous temple in India, where they just push you off with only a glimpse of the idols. Lord Rama sits majestically with Goddess Sita on his lap and Lakshamana standing guard beside him.

Sri Rama Navami festival is celebrated at Bhadrachalam every year with great pomp, the main event being the celestial wedding of Lord Rama and Goddess Sita.

River Godavari flows at the foot of the hill, the temple is under constant threat from Godavari’s destructive floods during the monsoon season. During the rest of the year, the Godavari flows quietly as if in a silent reverence to Lord Rama. 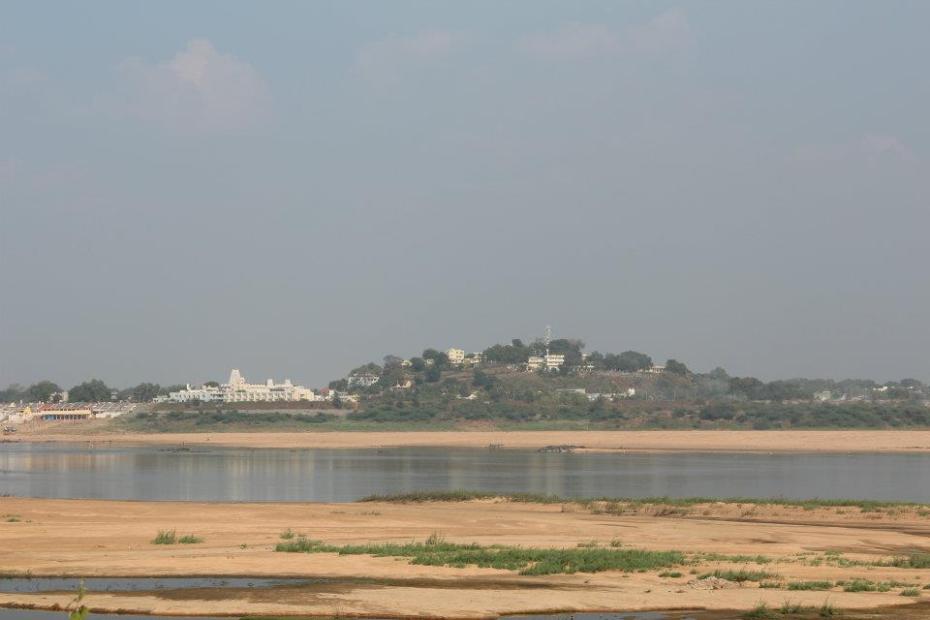 We walked along the river bank and the Godavari Bund Road which has depictions of the story of Ramayana. 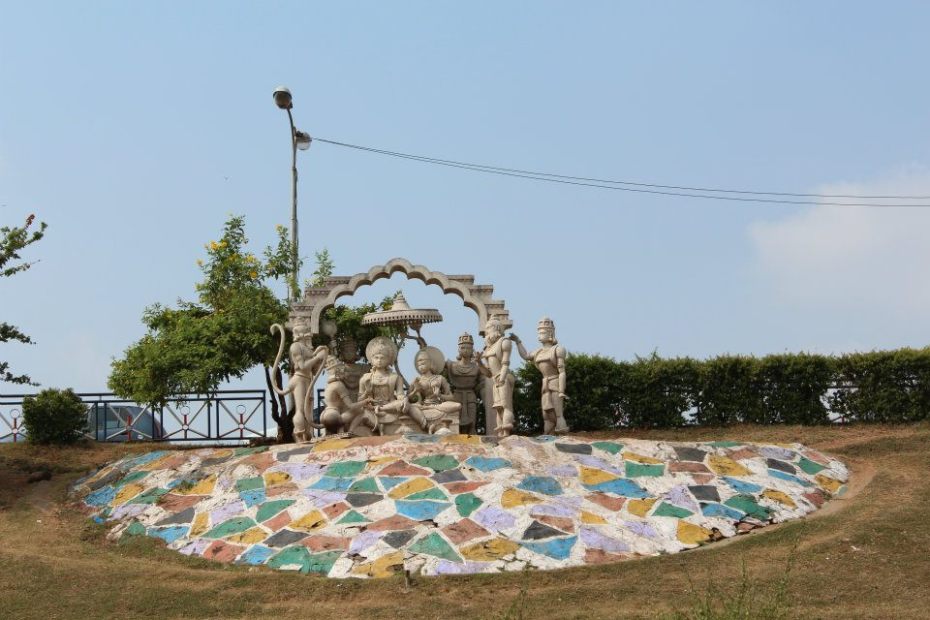 The scenes from the Ramayana prompted us to make a visit to Parnasala, 32 kms from Bhadrachalam, where a major twist in the Ramayana is believed to have happened.

The story of Rama is spread across the length and breadth of India, as he travels through the country during his 14 year exile. The most important part of the Ramayana happens at Dandakaranya, in the forest of Panchavati, on the banks of the Godavari, in the modern day state of Andhra Pradesh !

Panchavati is where Rama spent the last part of his exile and from where Ravana abducted Sita. The dense forest area is located on the banks of Godavari surrounded by the hills.

The 32 kms stretch to Parnasala is never ending, a bumpy ride on a single road through the country side. The first stop was at Lord Rama’s Rathi Simhasanam or the Rock Throne. The story goes that Lord Rama held court during his exile from this rock throne. 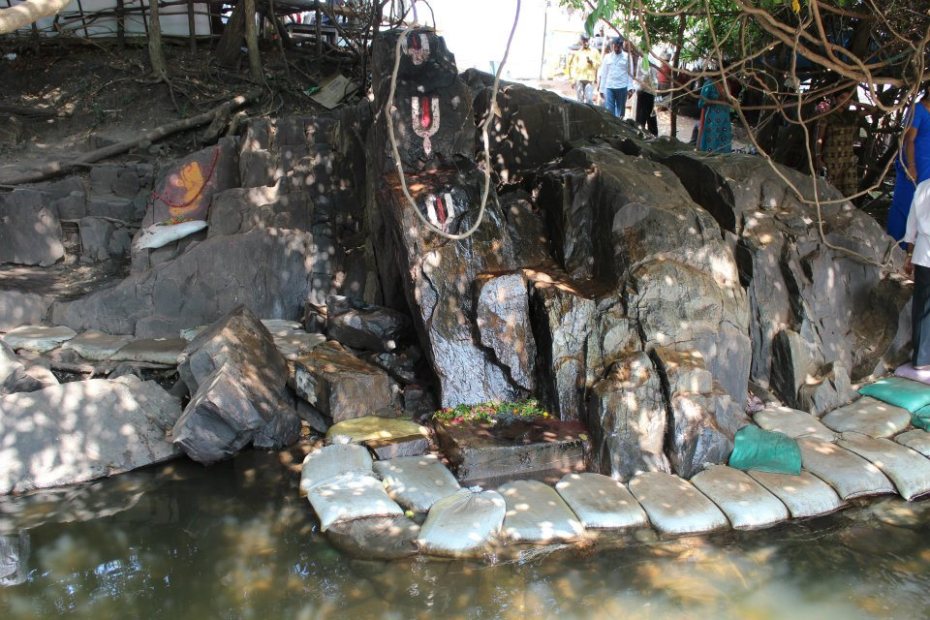 There is a flat rock nearby where they say Sita sun dried her sarees !

Further ahead, lies Parnasala where Rama is believed to have built his cottage during his years at Panchavati and Ravana carried off Sita to Lanka. The AP Tourism has built a cottage and put up some statues depicting the scenes of Sita’s abduction. The place is badly maintained, very crowded with people who seem to be picnicking and littering the place. Photography is not allowed, if you want a picture, you can only get it clicked by the cameramen appointed by the authorities, we do not know who the authorities are or what the logic behind that is !

Despite all this, a visit to Parnasala is recommended, not for the sights around but to just to experience the feel of setting foot in the place which is supposed to be the centre stage for one of the greatest works of literature in the history of the world. Did Rama really walk that very path or is it just one of those legends? Whether you will like the visit to Parnasala or not depends on your answer to that question. If not for anything else, it is always pleasing to just stand and look out at the Godavari, which has remained a witness for the Ramayana since eons. 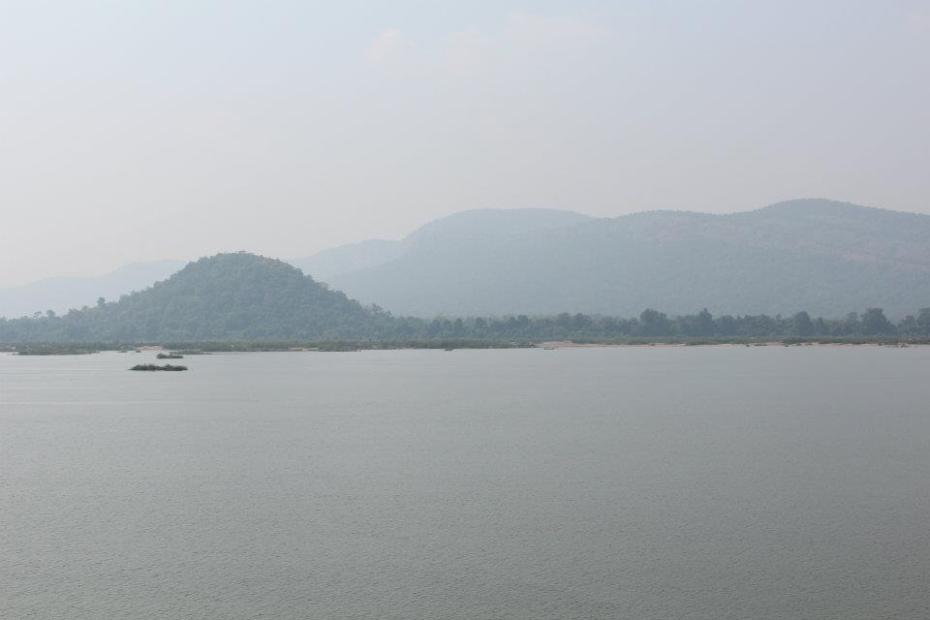 We were exhausted by the time we returned to Bhadrachalam, after another tiring one hour journey back. It was past lunch time and very hot even in November. APTDC came to our rescue once more with a refreshing Andhra Thali.

“Antha Ramamayam” (Rama is present in everything), sang Bhakta Ramadasu. That holds very true for Bhadrachalam, it is all about Rama, his story and the stories of his devotees.

Ramadasu composed some gems of Keerthanas in Telugu – “Paluke Bangaramayana, Kondapani”, “Pahi Ramaprabho”, “Mangalam”, Taraka mantramu korina dorikenu”, “Eteeruga nanu daya chusedavo” and everybody’s favourite “Ikshavakukula tilaka” where Ramadasu chides Lord Rama for not rescuing him from the painful life in prison, he had built the temple for him and Rama didn’t seem to be returning the favour, Ramadasu sings “nuvvu kulukutu tirgevu, evarabba sommani Ramachandra” (you prance around, whose father’s property do you think all this is, Ramachandra?). Ramadasu had such a deep-rooted devotion that the line between the Divine and human disappeared and God became an everyday person in his life.

As we left Bhadrachalam, Ramadasu’s immortal Keerthanas rang in our ears. We felt like we were just back from the times of the Ramayana !